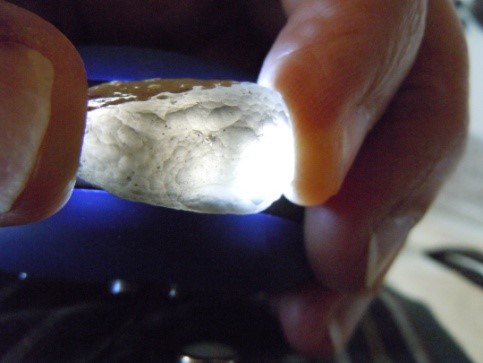 In my previous post, I discussed tektites – a byproduct of asteroid impacts, and obsidian, which can sometimes look like tektites.

Finally, to my trips to the location of the Saffordites. The area where I have hunted is east of Mt Graham and southeast of the city of Safford in southeast Arizona, several hours east of Tucson. It is a fairly flat area and the known area where Saffordites have been found covers many square miles, maybe tens or hundreds of square miles. Since these are many million-year-old weathered volcanic rocks, they may have been transported to their present location, so their source is unknown. As it turns out, this location is on my way to observing at the Vatican Advanced Technology Telescope on 10,000-foot Mt. Graham, but that is another story.

Above are three pictures taken just before we started looking for Saffordites. On the left is me with Twink Monrad, a closeup of snow on Mt. Graham, and a view of one of the areas where we have hunted. Twink is the person who got me interested in Saffordites. She hunts for terrestrial and extraterrestrial rocks as well as coins, jewelry, etc. She is very successful with all of these. Her claim to fame is that she is one of three people who were asked to map out the newly-discovered Gold Basin meteorite strewn field in 1995. Article: Meteorite Times – The 20th Anniversary Gold Basin Meteorite Celebration.

Being a desert area, it can be very warm, even in winter. One has to watch out for wildlife. Luckily, I have never come across a snake there, just a few rabbits and lizards. However, there are others out there that you need to be aware of, Mr. Park Ranger! Both times there, within minutes of our arriving at our hunting sites, we were greeted by the Forest Service just trying to make sure that we were not “visiting” from Mexico or carrying out a drug deal. 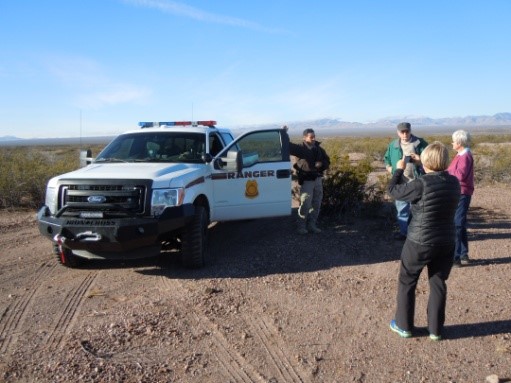 A visit from the Park Ranger. Credit: Larry Lebofsky

What you need for a safe and successful hunt is sunscreen, a good hat, sunglasses (though sometimes it is easier to spot the little black rocks without your sunglasses), lots of water, and an LED flashlight. The good Saffordites will be translucent. I will admit that I do not know if the difference between those that translucent and those that are opaque is due to a chemical or physical difference.

It takes a little time and practice to find your first few Saffordites. You are looking for a black rock among thousands of other-colored rocks. It was good to have a patient and helpful Twink there! “Ok, stand right there and look that way. There is a nice Saffordite right in front of you.” At first you think she is joking, but eventually you see it and get the hang of finding your own. Use the following pictures to determine “where’s the Saffordite?”

Here are the “answers.”

In two trips I have found well over a hundred Saffordites. Most of them are the ones that are translucent. I collect both and Twink is kind enough to give me her rejects. They are still very interesting rocks.

This post is an annotated and serialized version of a post originally appearing on the CosmoQuest Blog.

More Posts in this Series:
"Hunting for Saffordites"

1  |  Hunting for Saffordites East of Mt. Graham and the Vatican Telescope. pt. 1