If you peruse the Vatican Observatory’s 2019 Annual Report you will come across the book Decoding the Stars: A Biography of Angelo Secchi, Jesuit and Scientist, by VO Adjunct Scholar Ileana Chinnici, which was published in 2019 by Brill. It is a really nice book that I can recommend to all readers of “Sacred Space Astronomy.” I am not the only one who likes this book. It was recently awarded the Donald E. Osterbrock Book Prize for Historical Astronomy by the Historical Astronomy Division of the American Astronomical Society (click here for more information on the award). Secchi was a pioneering astrophysicist—one of the first to study and classify stars by means of their spectra.

Secchi built an observatory in Rome on the roof of St. Ignatius church. The church was built to support a large dome, but the dome was never constructed, meaning the building could solidly support an observatory. Chinnici writes:

Thanks to a family legacy left by to his highborn assistant, Fr. Paolo Rosa Antonisi, Secchi took the opportunity to purchase a Merz equatorial telescope, which, at twenty-five centimeter aperture, was then the largest existing in Italy…. In 1852, after obtaining his superior’s permission, the project [of building on St. Ignatius] was carried out with the help of the young engineer Angelo Vescovali and with the financial support of Pius IX, who attentively followed the construction….

(Chinnici notes that Pope Pius IX was a science enthusiast who as a student had written a paper on the making of astronomical telescopes.) The Merz telescope served as Secchi’s main instrument. The St. Ignatius observatory is long gone, although the base of the observatory is still there and is even visible in Google maps!

The site of Secchi’s observatory today (these photos were taken during a tour led by VO Director Br. Guy Consolmagno in 2017). The black curved rim is where the dome sat. The concrete structure in the center held the Merz telescope.

St. Ignatius church, as seen in Google maps. The site of the Merz dome is clearly visible (yellow arrow). The blue arrows show evidence of the dome of the church that was never built.

The Cincinnati Observatory does not actually have Fr. Secchi’s telescope—they just have one exactly like it. Consider this from their history page:

The Cincinnati Observatory is known as ‘The Birthplace of American Astronomy.’ It houses one of the oldest working telescopes in the world and was the first public observatory in the western hemisphere. Recently restored to its original beauty, the Observatory is a fully functioning 19th century observatory used daily by the public and amateur astronomers. The main telescopes are an 11-inch Merz and Mahler refractor from 1845….

In 1842, Cincinnati professor Ormsby MacKnight Mitchel was a dynamic, eloquent speaker and the first American populizer of astronomy – the Carl Sagan of the 1800s…. [I]n Munich, Bavaria (prior to a unified Germany) he discovered an 11-inch lens of incomparable quality that had already been ground but never installed. The tube was then constructed of brass and mahogany and the completed telescope was shipped via New Orleans, up the Mississippi and Ohio Rivers to downtown Cincinnati….

When the great refractor saw first light on April 14, 1845 it was the largest refractor in the Western Hemisphere and third largest in the world.

It is this telescope that is “one of the oldest working telescopes in the world”—still in regular use. And, it is all but identical to Angelo Secchi’s Merz at St. Ignatius. Consider the two sketches below—the telescope on the left is Secchi’s, the one on the right is Mitchel’s. 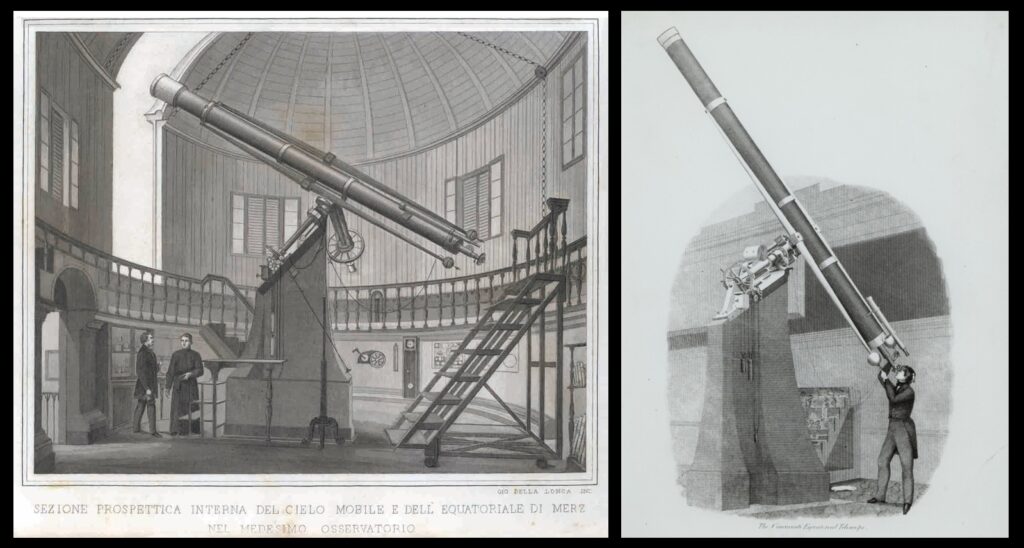 Now take a look at the two photos below. The one on the left is Secchi’s. Well, not quite. It is an identical Merz telescope installed at the Palermo observatory in 1865 by Secchi’s friend and scientific collaborator Pietro Tacchini (Chinnici writes that Tacchini and Secchi could easily compare the results of their observations because they had “two almost identical telescopes”). The telescope on the right is Mitchel’s. By the time the photo was taken the Cincinnati telescope had been moved to a different location and was mounted on a different pier than the one seen in the sketch. Mitchel’s 1845 Merz and Tacchini’s 1865 Merz would appear to be the same telescope—same tube, same spherical balancing weights, same spoked declination wheel, same counterweight on the declination axis. 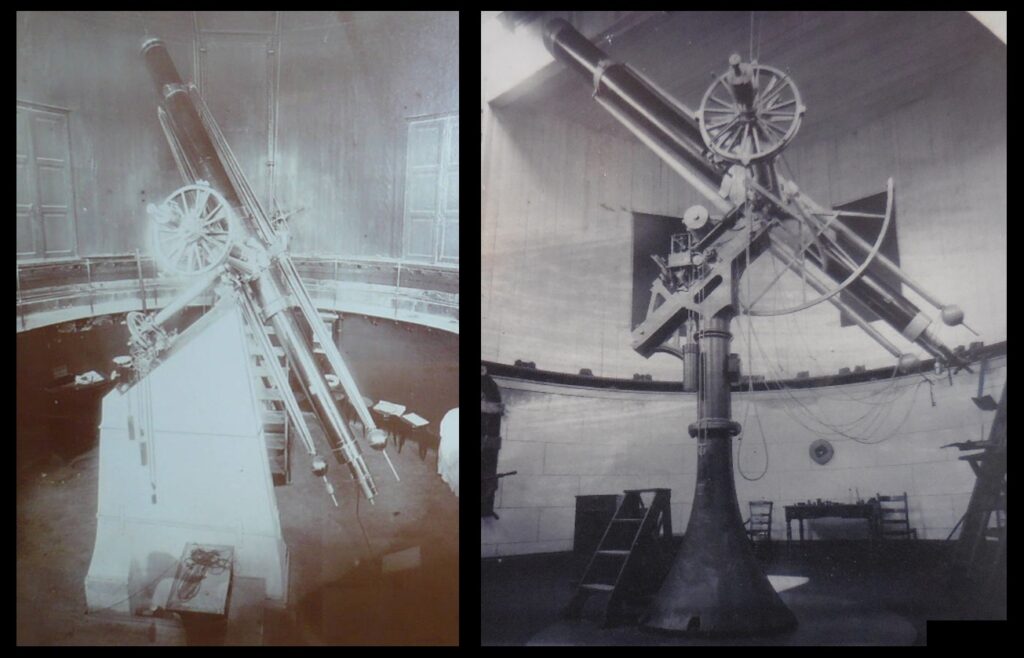 It’s pretty remarkable how similar they are. So, it is a safe bet that the Merz telescope in Cincinnati is really similar to Secchi’s actual telescope. So, if you want to see what sort of telescope Fr. Angelo Secchi used in his pioneering work in spectroscopy, go see the Merz telescope at the Cincinnati Observatory! And you don’t have to just see it—the telescope is fully operational and open to the public, so you can see through it, too. Enjoy the photos below, which I took when I visited in August.

The Cincinnati Merz telescope (left) and a close-up of its mount.

Left—a weight-driven “clock” drive that turned the telescope to follow the stars as they rise and set. This mechanism is no longer used; a small electric motor drives the telescope now. Center—the polar axle of the telescope. Right—the large, spoked declination wheel (that shows the celestial latitude toward which the telescope is pointing) that is so noticeable in the old photographs. The large counterweight visible in those photos has been removed.

Left—looking at the Merz from the user’s point of view. Right—note the wooden tube. Note also the balancing weights. The large, spherical balancing weights visible in the sketches and old photos were replaced at some point.

The Merz telescope is under the big dome. Can you recognize your author on the right, behind the Covid mask?