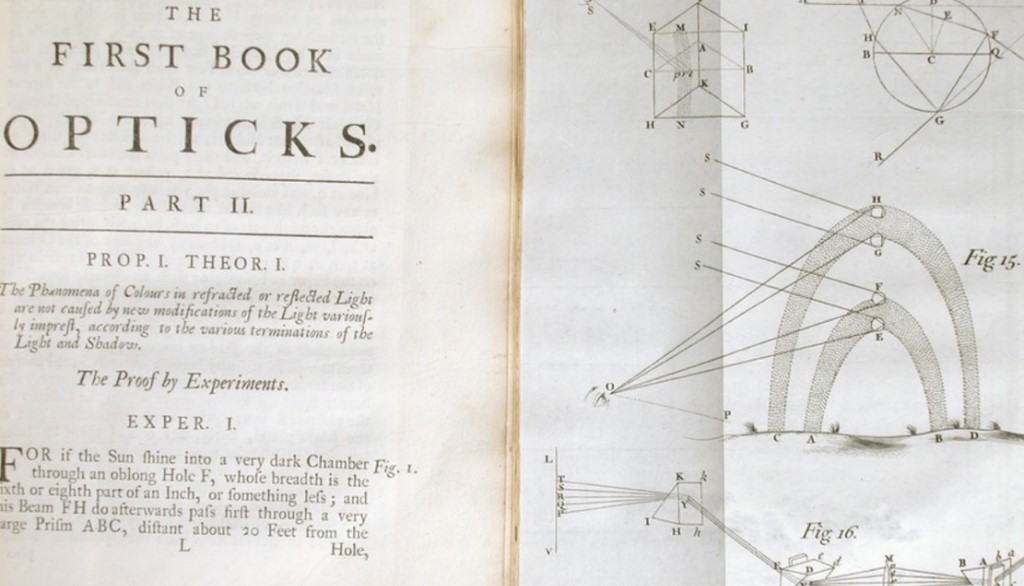 Do you see the rainbow in the picture below?  Look closely.  The rainbow is faint.  It is located right down on the horizon.

Playing with the zoom and contrast maybe makes the bow a little more apparent.  This photograph was taken from a walking bridge above Jeffersonville, Indiana.  The bridge (originally a railroad bridge) crosses the Ohio River, the water visible in the photo.

Rainbows are caused by the reflection, refraction, and dispersion of light by spherical droplets of water.  The geometry of this phenomenon is such that the bow is always seen at a 42° angle from the point in the sky opposite the sun.  This has been known for a long time—there is a nice illustration of a rainbow in Isaac Newton’s Opticks.

Therefore, if the sun is on the horizon and there is rain falling in the east, you will see a very impressive semicircular rainbow arching 42° up into the sky.  “I will set my bow in the clouds [Gen 9:13].”

It is difficult to see any rainfall–caused bow when the sun is anywhere near 42°.  Were the sun at 42°, just the top of the bow would be at the horizon, and that would show as just a little hint of color.  I do not think I have ever seen a bow as low as this one over the Ohio River.  So, is the thing seen in the photograph really a rainbow?  Or is it some other phenomenon, caused by ice crystals or something?

Well, I shot this photo with a phone cam.  The phone stamps photos with a date and time; this photo was taken at 4:41 pm on September 3, 2022.  The phone networks carry a time signal, so the phone time is accurate.  So, let’s plug that date and time into the Stellarium app and see what was the altitude of the sun at the moment I took the photo.  If the thing in the photo is a rainbow, the sun’s altitude should be just under 42°, given that the supposed bow is just a bit above the horizon.

And the answer is [drum roll]…