Continuing our series on the Religion, Science, and Environment (RSE) Symposia organized by the Greek Orthodox Church, today we explore the 1999 symposium on the Danube River. The previous RSE symposium explored the ecological crisis that threatening the Black Sea. One of the main themes of the symposium was how pollution from the Danube River was flowing into the Black Sea, contributing to its denigration. In light of this, it makes sense that the symposium to follow the Black Sea gathering would be held on the blue Danube. 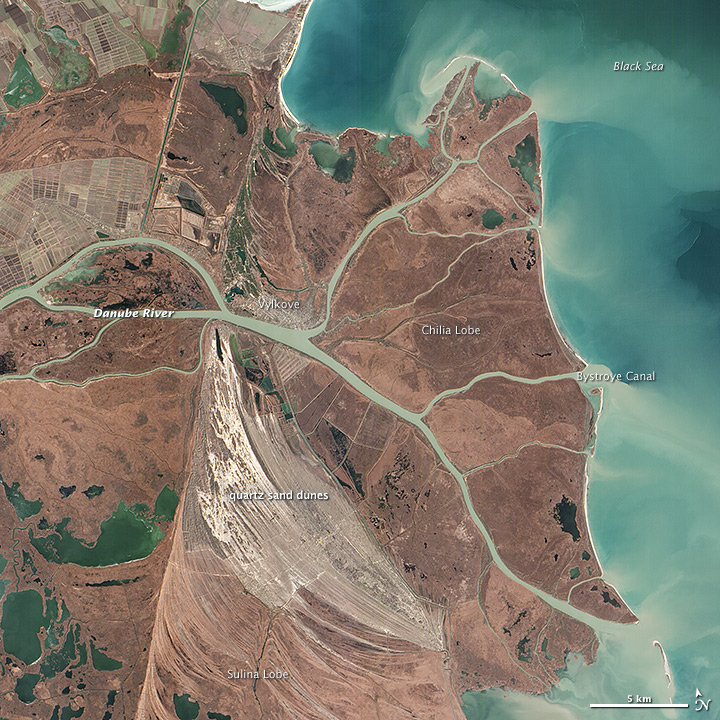 NASA image of the meeting point between the Danube River and the Black Sea. Image Credit: NASA

The Danube River connects ten countries with a drainage basin that finds its way into a number of other counties. The countries themselves represent some of the most war-torn regions of Europe, originating in Germany and making its way through Austria, Slovakia, Slovenia, Hungary, Croatia, Serbia, Bulgaria, Romania, Moldova, and Ukraine. These countries, along with the Czech Republic, Montenegro, Bosnia and Herzegovina, have developed the International Commission for the Protection of the Danube River (ICPDR). Established in 1998, one of their central activities is to ensure the management of water, both surface water and ground water, within the river basin of the Danube.

The ICPDR along with the World Wide Fund for Nature (WWF) partnered with the RSE symposium in 1999 to work toward protecting the Danube’s crucial waters. Given the success of the Black Sea Symposium, optimism was high among the participates that this gathering could lead to a clear plan of action to help this vital ecosystem. Once again, the spiritual leader of the Symposium was Patriarch Bartholomew.

When reading the presentations that occurred during the symposium along the Danube, a clear theme emerges: The way we approach human dignity has a direct impact on how we treat the environment.

In regard to human dignity, the group recalled atrocities against human dignity when the symposium prayed at the concentration camp in Mauthausen, remembering the victims of the Holocaust, and the ethnic cleansing the occurred during the war within former Yugoslavia when the group prayed at the ruins of bombed bridges that blocked the Danube at Novi Sad. These events were a sobering reminder that when solidarity is forgotten and ethnic nationalism is embraced, some of the most horrific events in human history have been allowed to occur.

In regard to the environment, the Danube symposium reflected on how closed national ideologies often approach the environment in a utilitarian manner with little or no regard for the impact this approach has upon neighboring countries. The Danube River is a prime example of the aftermath of such ideologies. A river that was once a rich ecosystem was devastated by manipulating the Danube for purposes of industry and as a symbol of national power and independence. One country would use the Danube as a dump point for industrial waste and raw sewage while the neighboring country would use the same waters as a primary source of drinking water. Other countries would “strait jacket” the river to narrow the Danube, making the waters deeper and faster for shipping barges, but ended up killing off much of the natural habitat in the process. In a real way, the troubled waters of the Danube became a symbol of the turbulent political and social “waters” that were tearing this region apart.

In light of how ethnic nationalism became the fuel for ethnic hatred and denigration of the environment along the Danube River, Patriarch Bartholomew offer a strong condemnation of nationalism, the wars of which they sparked, and reaffirmed that acts of violence in God’s name are not tolerable. These and other reflections stand as a sober reminder in our day and age that the winds of secular nationalism often give birth to exclusionary ideologies that impact people’s social and religious worldview, often leading to violence against one’s neighbor and the exploitation of our common home for utilitarian gain. In the process, the Common Good is forgotten and replaced with satisfying one’s desire for power.

So, how does this symposium fit on a blog that is dedicated to faith and astronomy? In regard to astronomy, it reminds me of one of the most iconic images NASA has shared with the world. The irony is that the image I speak of is not one of the night sky from Earth, but it is of our Earth from the perspective of NASA astronauts on Apollo 8, watching “Earth Rise” while orbiting the moon. This image, which revealed both the beauty and fragility of our common home, gave birth to two social movements: The rise of ecology to protect our planet and a call to solidarity, realizing that all of humanity shares the same, small, beautiful home. 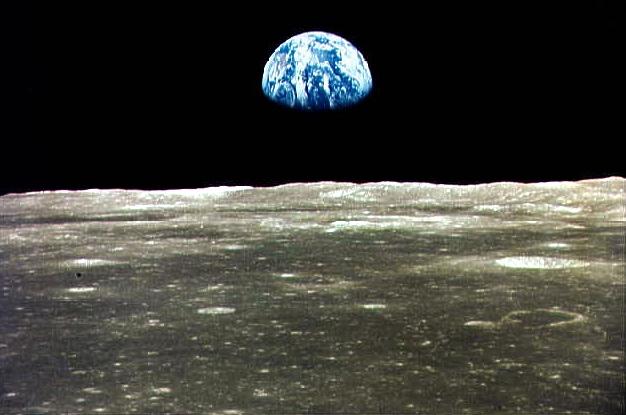 From the perspective of faith, this image of the Earth reminds us of three main principles of Catholic Social Teaching (CST): The call to human dignity, solidarity, and care for creation. In regard to human dignity, CST teaches that the call to love God and neighbor is universal, meaning that all people are deserving of dignity regardless of race, creed, gender, country of origin, or state of life. This call is the foundation of Catholicism’s vision of human dignity and upon this foundation are built the rest of the themes of CST.

In regard to solidarity, we are reminded that amid varying cultures, social structures, economic statuses, expressions of religion, and political ideologies, these differences should never splinter into warring factions, but social structures need to be developed to find a unity amid this social diversity. The principle of solidarity calls us to live in tension between affirming the rights of the individual and affirming the interconnectedness of all peoples and nations that constitute one human family.

In regard to care for our common home, we see that our beautiful, fragile world is the only home we have. Whether it be the destructive force of weapons of mass destruction or the blind exploitation of natural resources that has done permanent damage to land and water, we have come to realize the sobering fact that humanity has within its power the ability to do grave harm to our world in a way that would threaten human existence. These revelations have led the Popes of the modern era, starting with St. John XXIII, to voice loudly and clearly two constant mantra’s to the world: Care for creation is foundational to human dignity and any war in the modern era risks massive destruction of which humanity may not recover. In light of these insights, we see that ideologies that view creation as a mere “thing” to use for one’s benefit with no consideration of the impact upon their neighbor is to be avoided. It develops a simple, but powerful ethic of understanding the impact our ecological decisions have upon the human person.

There is much more that could be said about the RSE symposium on the Danube and the lessons we can learn in our modern times as it pertains to human dignity, solidarity, and care for creation. When exploring the challenging events of history that lay in the background of these reflections, it can cast a heavy pal upon our thoughts and emotions, wishing to ignore the stark realities that lay in front of us. However, we need to confront these challenges in a way that gives hope and seeks to establish peace and stability in our world. Pope Francis in Laudato Si’ provides a constant message of hope in the crises we face, seeing humanity not as the problem, but the solution to our social and ecological struggles, encouraging us to embrace our faith and practice the Church’s social doctrine as a means of working toward establishing a world of peace and solidarity. May we embrace this faith, finding the courage to confront social structures that divide the human family, choosing instead to uphold human dignity and care for our common home.

To understand the RSE symposium in depth, I have provided a documentary that summarizes the event on the Danube. Enjoy, and have a great week!