NASA held a press briefing this week on New Horizons, so there’ll be a flurry of news stories for a while about the mission to Pluto.  Bob Trembley already pointed out a new color image of Pluto and Charon.

If you care to watch the briefing, it’s in two parts on Youtube here and here. 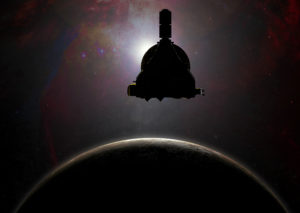 The other day I wrote about explaining to a friend how New Horizons got started, and why a flyby mission, rather than an orbiter, was the only real choice if our generation was to dispatch a spacecraft to Pluto at all.

Another friend dwelled upon the limitations of flybys.  While he certainly welcomed New Horizons, he indicated, in a tone of resignation, that the spacecraft would provide some measurements of Pluto’s atmosphere, and good pictures of one hemisphere.*  He didn’t sound optimistic about the quantity of scientific results.

I, on the other hand, had been reading up on the New Horizons mission plan.

Sure, I agreed, we’ll get atmospheric measurements, and high-resolution  pictures of one hemisphere of Pluto.

And good pictures of one hemisphere of Charon. And infrared spectra and imaging. And ultraviolet spectra. And a fair look at Nix. And some imaging of the other three moons. And a search for unknown moons. And a ring search. And imaging the other hemispheres at thirtysomething kilometers per pixel. And dust impact data. And solar-wind particles. And high-energy particles. And high-altitude samples of the atmosphere itself.  And radio occultation. And solar occultation in UV. Temperature and pressure profiles of the atmosphere, top to bottom.  And Doppler radio science to constrain coefficients of Pluto’s gravity field.

And, if an extended mission is granted, and the spacecraft is still working, imaging and spectra and dust and particles and radio science for another Kuiper belt target.

And cruise science–dust and particles and solar wind beyond Pluto.

In truth, provided everything functions properly, an enormous amount of data will be collected.  The spacecraft carries a pair of 8-gigabyte memory devices, and it’s a safe bet that the New Horizons team will make the most of their capacity.

It will be a long time before another spacecraft ventures out to Pluto.  Furthermore, it will be enormously challenging to place an orbiter, a lander, or a rover there.  So the New Horizons data will be the best available for many years to come. 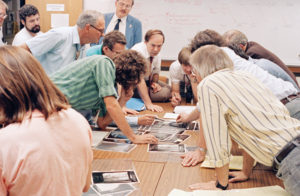 Members of the Voyager science team pore over fresh images of Neptune’s moon Triton as data from Voyager 2 stream into JPL in August 1989.
Photo by D. Patterson and B. Rowe. Courtesy NASA/JPL-Caltech

In the 1970s, Voyager 1 and Voyager 2 were launched to explore the outer solar system: Jupiter, Saturn, Uranus, and Neptune.  After six Voyager flyby encounters, we knew a whole lot more about four planets than we ever had. It took 16 years for another spacecraft to visit Jupiter, 23 years to visit Saturn, and the others haven’t been revisited yet. A whole lot of science got done in those years, as researchers sifted through Voyager data sets. Multiple textbooks on planetary science were rewritten because of what the two Voyager spacecraft revealed.  And a flyby spacecraft can tell its successors the next questions to ask.

The example of the Voyagers gives me great confidence that this new flyby will, if everything works well, be a rich trove furnishing useful insights for a long time to come.  The people behind New Horizons have spent 17 years of development and 9 years of flight time to get a brief, but intense, look at Pluto’s vicinity this coming summer.  I think they’re happy with that deal.
______________________________
*Half of Pluto will be in shadow during the few hours the spacecraft will be very close.  The best images of this dark hemisphere will have been snapped when it was sunlit, three or four days prior to closest approach, from very far away. The resolution of such images will be considerably lower than that of the best encounter-day images.