I lost my brother Victor to COVID-19 on April 12th. Please, everyone take precautions and stay safe!

The triple-planet conjunction of Mars, Jupiter and Saturn continues in the southeastern predawn sky. 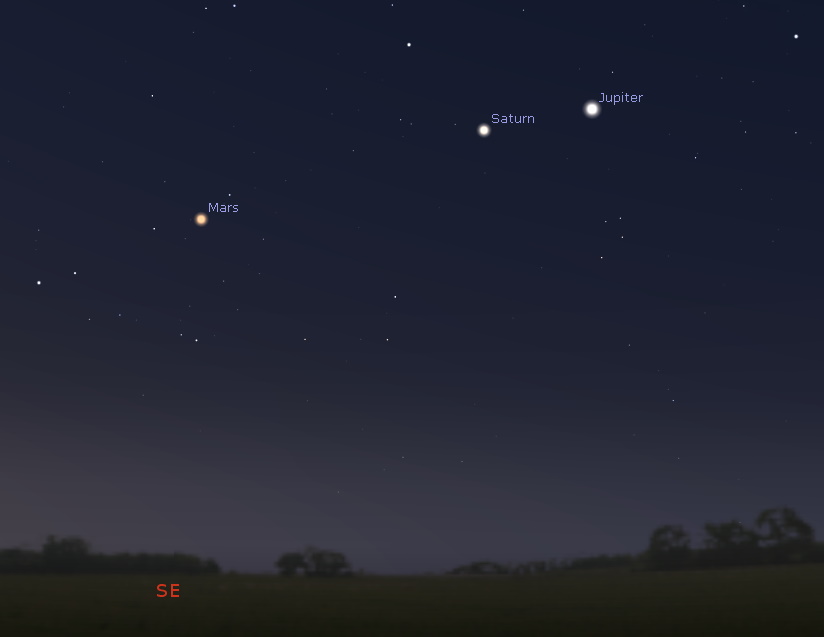 Venus, Aldebaran and Rigel form a temporary triangle asterism in the western sky at dusk. The Moon appears near Aldebaran on the evening of April 25th, and near Venus the next evening.

The star Vega and the constellation Lyra appear above the northeastern horizon at midnight. 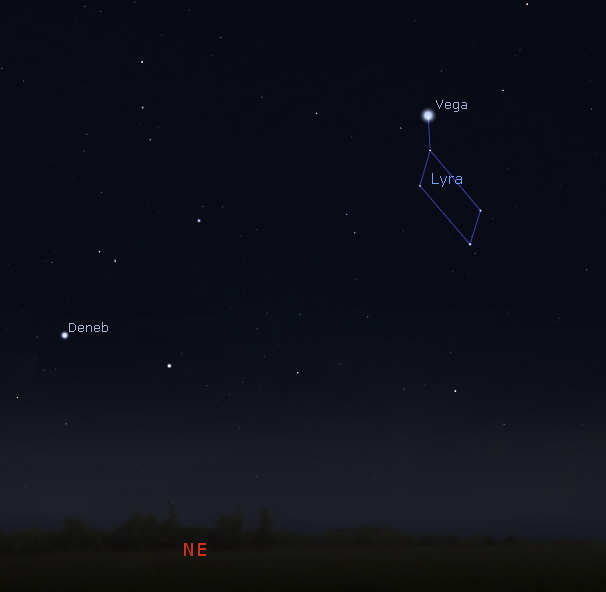 The star Vega and the constellation Lyra above the northeastern horizon at midnight this week. Credit: Stellarium / Bob Trembley.

After April 23rd, the Moon will be a waxing crescent, visible toward the southwest in early evening.

2/ The good news is that a patent-pending technology I have been developing at UCF was selected for development by the NASA NIAC program! "Aqua Factorem" ("water factory"): an ultra-low energy method to extract ice from lunar soil. Read about it here: https://t.co/oQHfcS7pQ6

The Sun has been spot-free for 16 days. Coronal holes appear at both poles – the southern coronal hole has been open and huge for several weeks.

Light prominence activity on the Sun’s limb over the last couple days – but enough to get a good pic!

It's #SunDay! ☀️ Create your own Sun with this #NASAatHome activity, complete with sunspots! Sunspots are an indicator of solar activity — more sunspots are tied to higher levels of solar activity. How active will your Sun be? https://t.co/34bKEAIlSG pic.twitter.com/pKOCoZ8bks

#LyridMeteorShower peak tonight! Compared to other meteor showers, the Lyrids tend to produce bright meteors and an occasional fireball. Don't miss the show (if you can… safety first!) https://t.co/r1bWjsPtga pic.twitter.com/7P94txUl6v 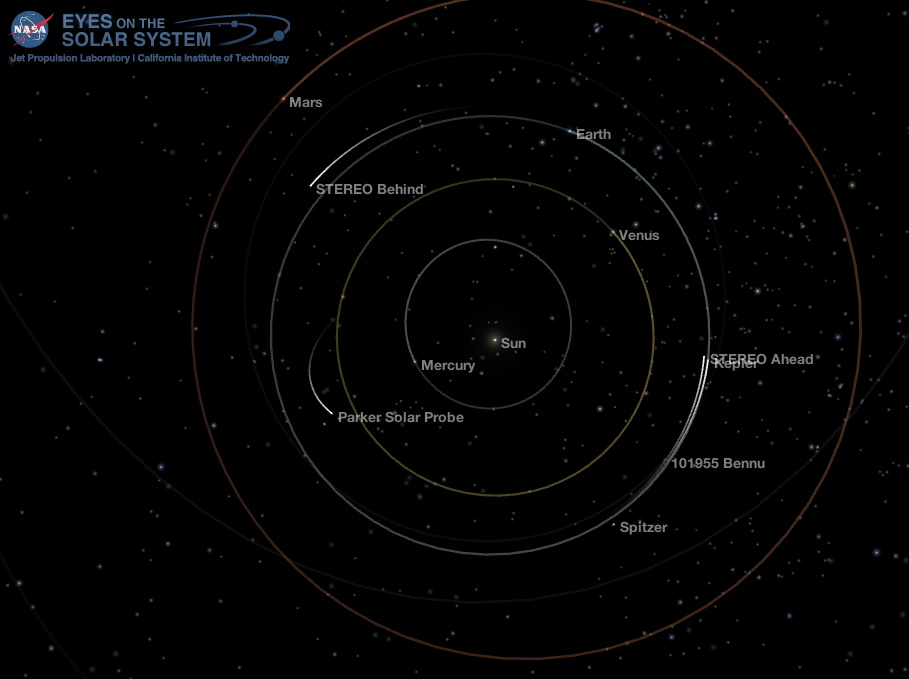 Position of the planets and a couple spacecraft in the inner solar system, 2020-04-21. Credit: NASA Eyes on the Solar System / Bob Trembley.

I don’t believe I’ve ever posted a zoom-in to Earth showing several satellites using NASA’s Eyes – so here ‘ya go: 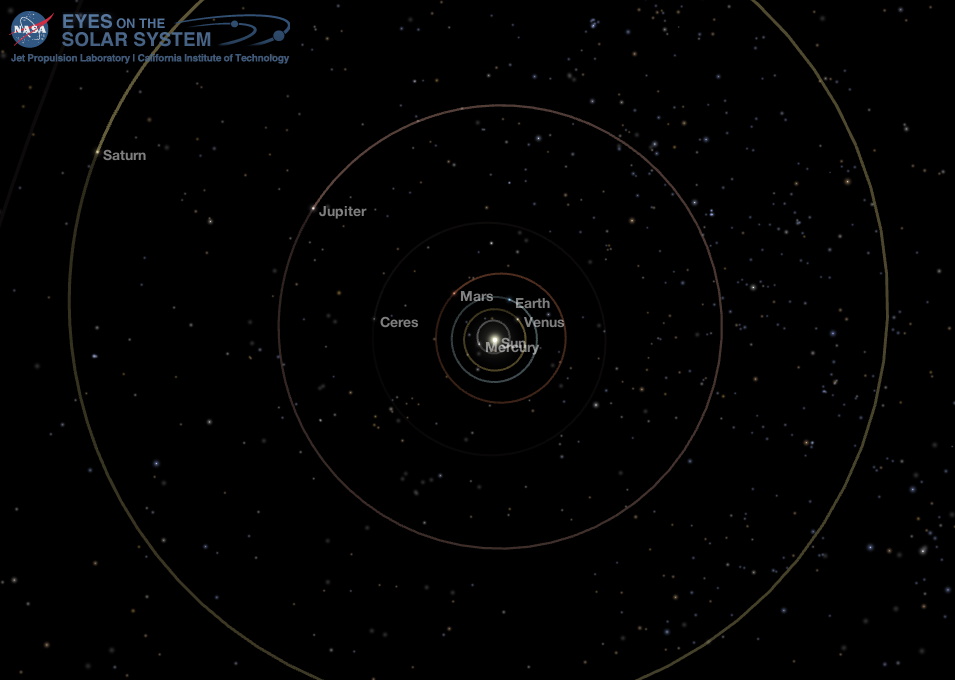 Position of the planets in the middle solar system, 2020-04-21. Credit: NASA Eyes on the Solar System / Bob Trembley.

Position of the planets some transneptunian objects in the outer solar system – the orbit of TNO Makemake highlighted. 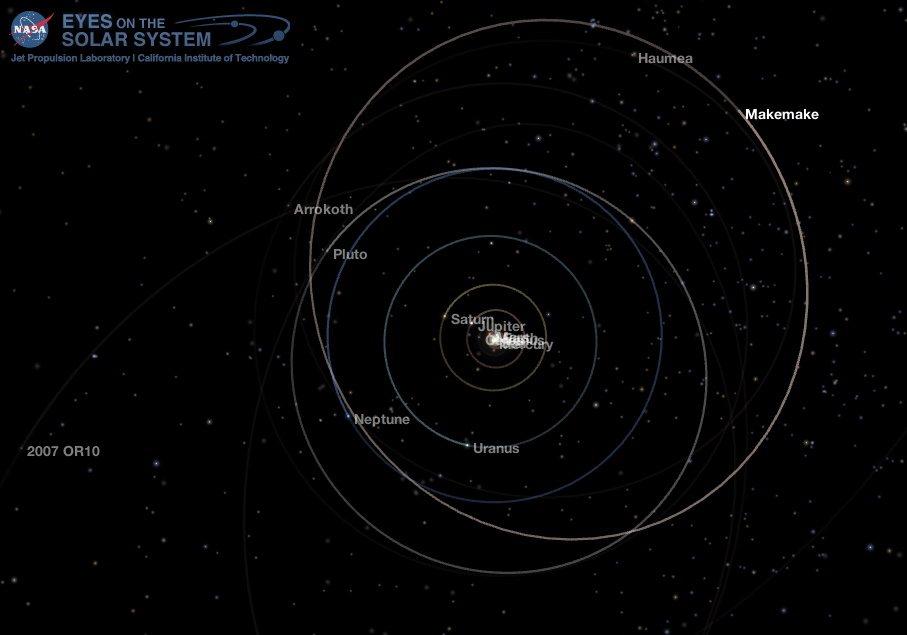 Position of the planets in the outer solar system, 2020-04-21, with the orbit of TNO Makemake highlighted. Credit: NASA Eyes on the Solar System / Bob Trembley.

Wanted to share my closest view yet of asteroid Bennu from yesterday’s rehearsal!

#Hubble30 Decades of planning. A devastating setback. Over a million mesmerizing images of space. The legendary story of the Hubble Space Telescope unfolds in @NASA's new podcast ?

NASA's Chandra Space Telescope Is Back in Action After Gyroscope Fix https://t.co/0p4jjOZeNF pic.twitter.com/LOtMSiPbbq

To celebrate Earth Day on April 22nd, enjoy this encore release of “Down to Earth – Shining Oasis,” where @Astro_DavidS of @CSA_ASC recalls the first time he caught a glimpse of the Earth from the Soyuz capsule on his way to the space station. #SpaceStation20th #EarthDay50th pic.twitter.com/9wUI5ENZrY

On April 22, the world will observe the 50th anniversary of #EarthDay and @NASA wants you to join in! From a Q&A with an astronaut on the @Space_Station to scientists sharing their research from their homes, we want to share this #EarthDayAtHome with you.https://t.co/WBo9MMGhNl pic.twitter.com/Rv1CtVBXvY

Happy #InternationalDarkSkyWeek! We’ve come to the end of our stargazing season at Denali. The sun is up for so long now that we're only experiencing twilight and won’t have a true night again until late August. What’s your favorite #constellation?

I was playing around in SpaceEngine, and found one of the stars that orbits really close to SGR A* – the Milky Way’s central black hole. I took this screen shot when the star S175 was at periapsis (closest-approach) with SGR A*. I’m pretty sure the radiation environment here is fantastically hostile. 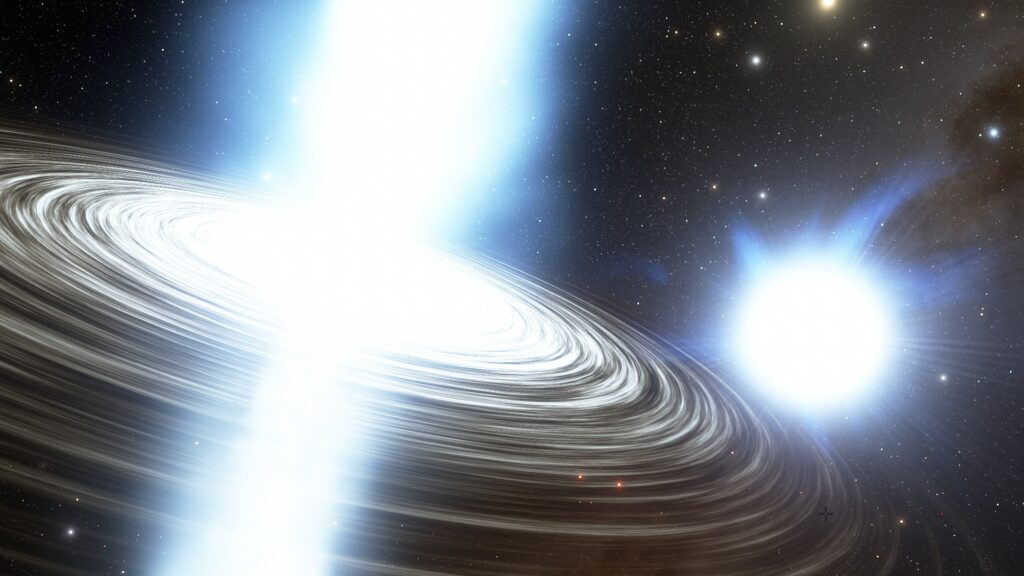 Continuing with my visual tour of nearby stars and their systems, we travel to Ross 128, 11 light years distant. 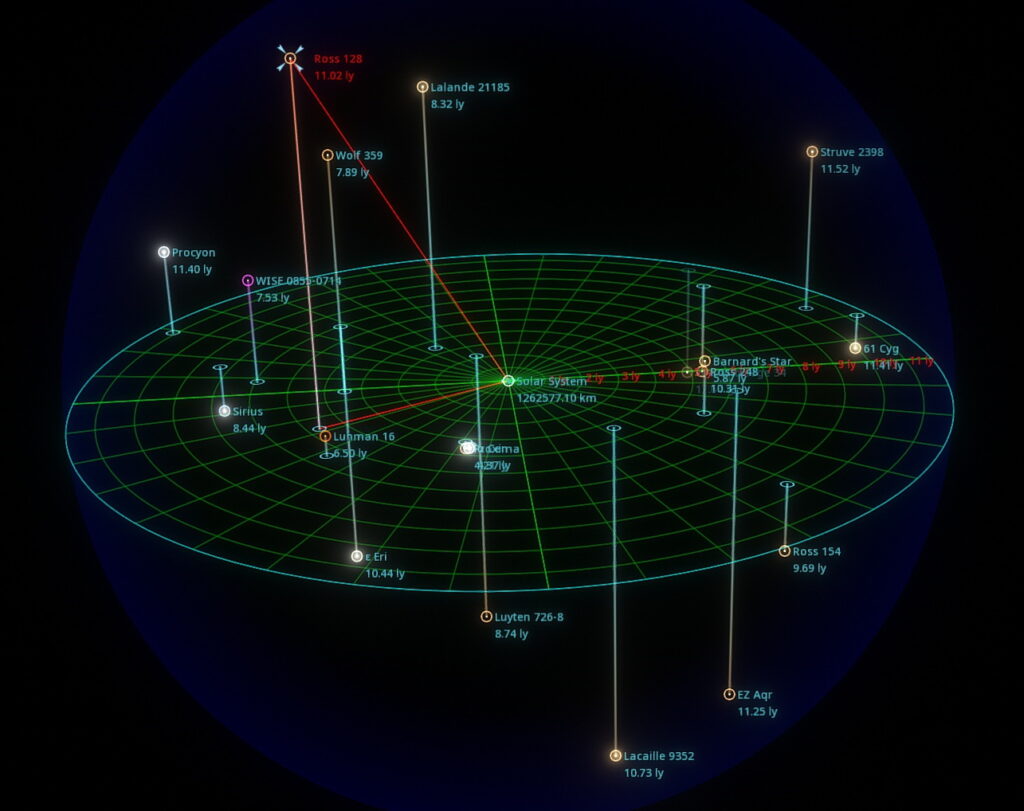 Distance to Ross 128 from Sol; the plane (green) is aligned with the orientation of the plane of the Milky Way galaxy. Credit: SpaceEngine / Bob Trembley.

Ross 128 is a red dwarf in the equatorial zodiac constellation of Virgo, near β Virginis. The apparent magnitude of Ross 128 is 11.13, which is too faint to be seen with the unaided eye. Based upon parallax measurements, the distance of this star from Earth is 11.007 light-years (3.375 parsecs), making it the twelfth closest stellar system to the Solar System. It was first cataloged in 1926 by American astronomer Frank Elmore Ross.

This low mass star has a stellar classification of M4 V, which places it among the category of stars known as red dwarfs. It has 15% of the mass of the Sun and 21% of the Sun’s radius, but generates energy so slowly that it has only 0.033% of the Sun’s visible luminosity; however, most of the energy being radiated by the star is in the infrared band, with the bolometric luminosity being equal to 0.36% of solar. This energy is being radiated from the star’s outer atmosphere at an effective temperature of 3,180 K. This gives it the cool orange-red glow of an M-type star.

Ross 128 is an old disk star, which means it has a low abundance of elements other than hydrogen and helium, what astronomers term the star’s metallicity, and it orbits near the plane of the Milky Way galaxy. The star lacks a strong excess of infrared radiation. An infrared excess is usually an indicator of a dust ring in orbit around the star.– Wikipedia 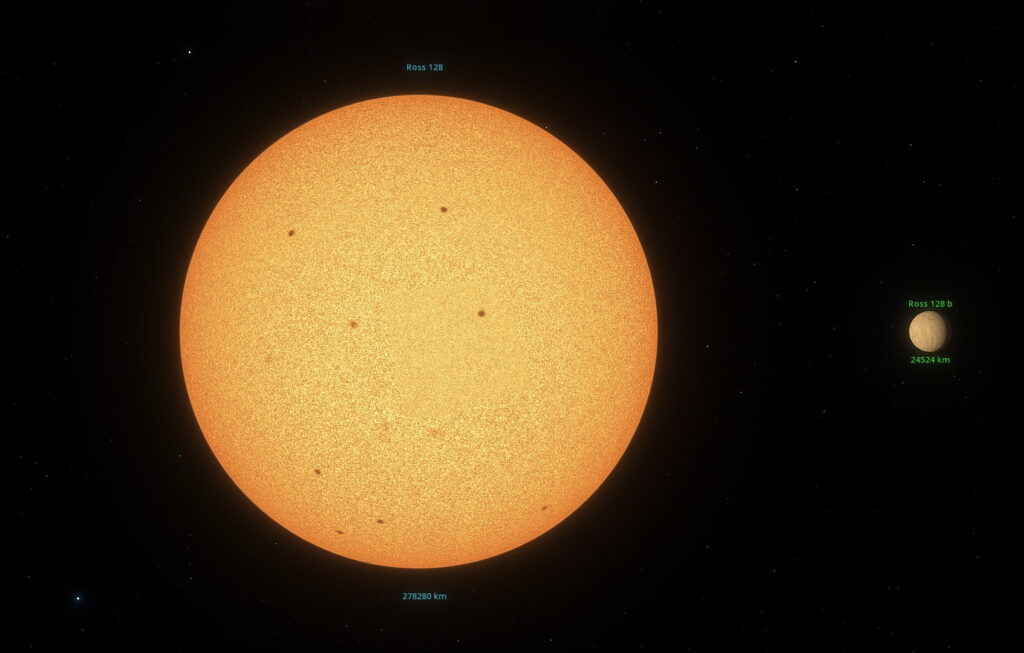 Ross 128 b was discovered in July 2017 by the HARPS instrument at the La Silla Observatory in Chile, by measuring changes in radial velocity of the host star. Its existence was confirmed on 15 November 2017. It is the second-closest known Earth-size exoplanet, after Proxima b. It is calculated that Ross 128 b has a minimum mass of 1.35 times the Earth, and orbits 20 times closer to its star than Earth orbits the Sun, intercepting only about 1.38 times more solar radiation than Earth, increasing the chance of retaining an atmosphere over a geological timescale. Ross 128 b is a closely orbiting planet, with a year (rotation period) lasting about 9.9 days. At that close distance from its host star, the planet is most likely tidally locked, meaning that one side of the planet would have eternal daylight and the other would be in darkness. Near-infrared high-resolution spectra from APOGEE have demonstrated that Ross 128 has near solar metallicity; Ross 128 b therefore most likely contains rock and iron. Furthermore, recent models generated with these data support the conclusion that Ross 128 b is a “temperate exoplanet in the inner edge of the habitable zone.” – Wikipedia 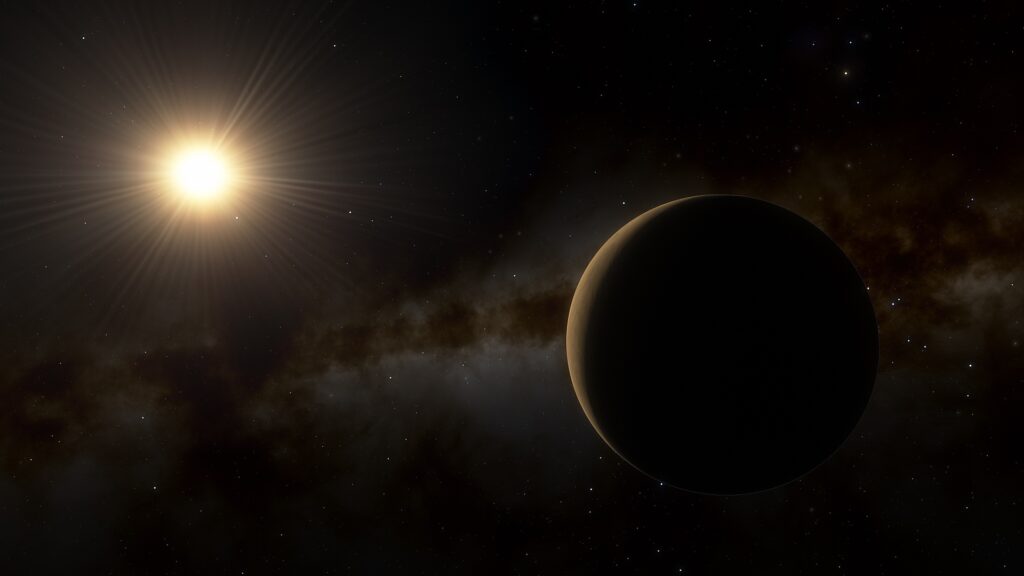