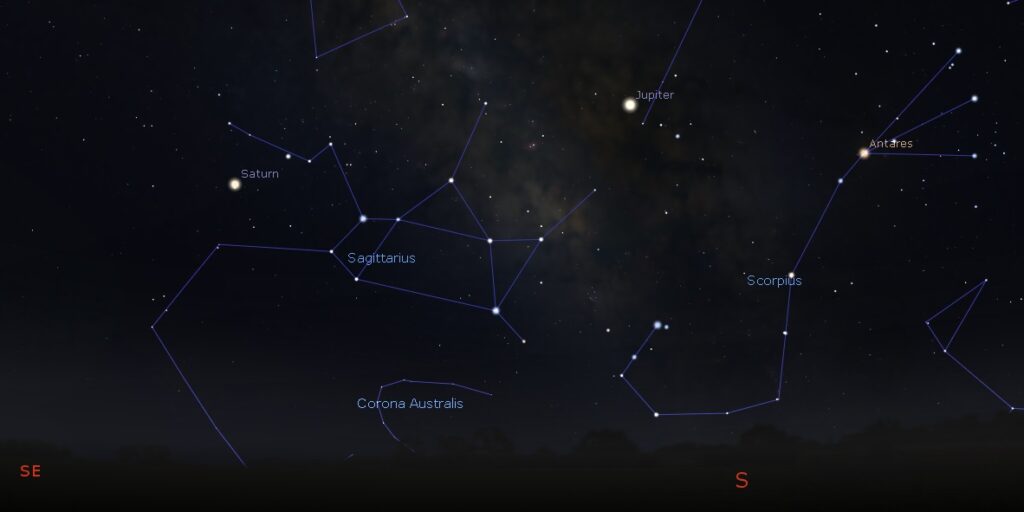 This Friday, multiple planetariums and observatories in Michigan will host evening astronomy outreach events during Statewide Astronomy Night (SWAN) – the Warren Astronomical Society among them. Observing is planned at all sites, and while activities and presentations may vary between sites, all will be held rain or moonshine!

Saturn, Jupiter and the star Antares appear in south-southeastern predawn sky all week; I saw Jupiter this morning as the sky began to brighten.

The star Vega is high and bright in the east-northeastern sky in the early morning. 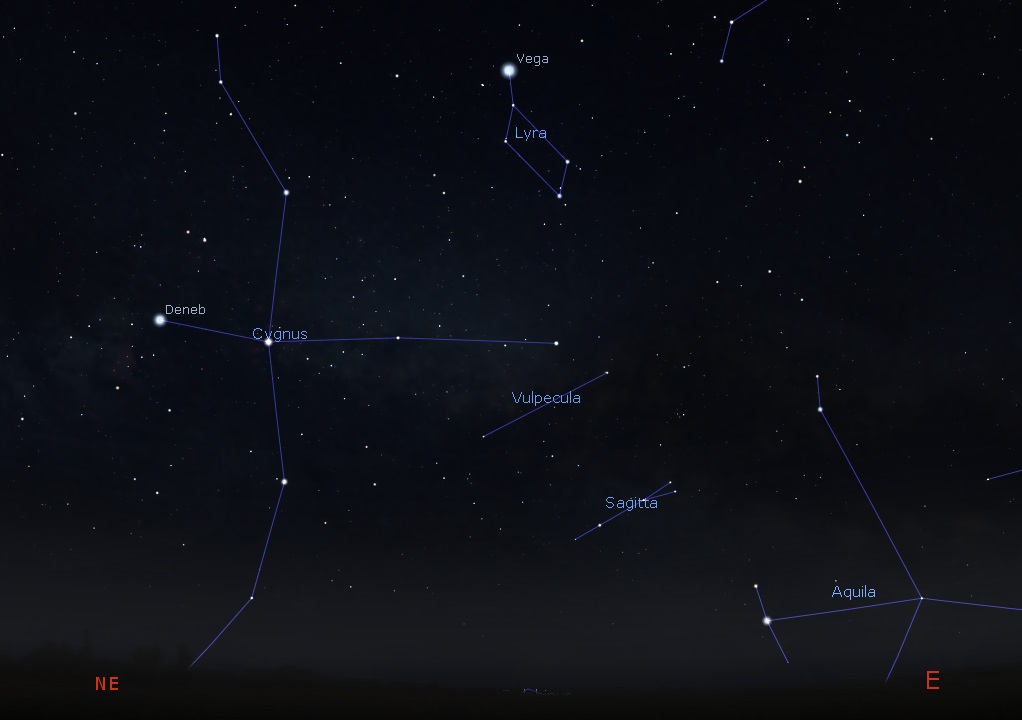 Vega high in the east-northeastern sky in the early morning on Apr. 9, 2019. Credit: Stellarium / Bob Trembley.

A very thin waxing crescent Moon appears near the star Aldebaran and Mars in the western sky after sunset on Apr. 9th. 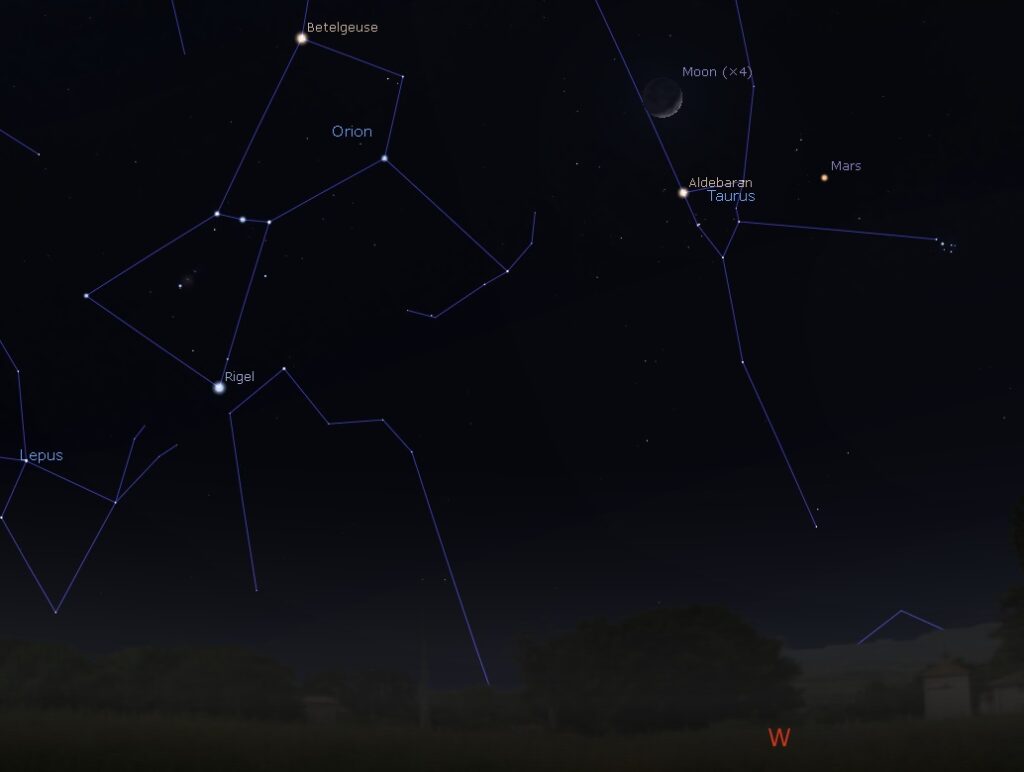 The waxing crescent moon near the star Aldebaran in the western sky after sunset on Apr. 9, 2019. Credit: Stellarium / Bob Trembley.

The first-quarter Moon appears near the constellation Gemini southwestern sky after sunset on Apr. 12th. 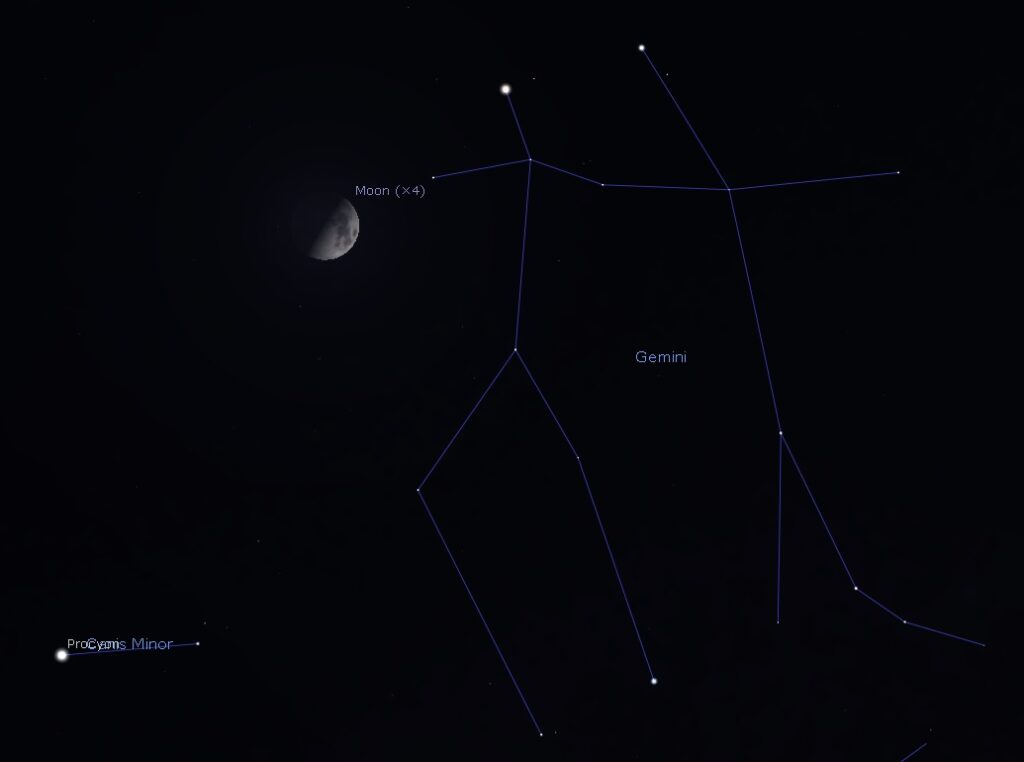 The first-quarter moon near the constellation Gemini high in the southwestern sky after sunset on Apr. 9, 2019. Credit: Stellarium / Bob Trembley.

IC 1101 is a supergiant elliptical galaxy at the center of the Abell 2029 galaxy cluster, approximately 320 megaparsecs (1.04 billion light-years) from Earth. … IC 1101 is among the largest known galaxies, but there is debate in the astronomical literature about how to define the size of such a galaxy. – Wikipedia 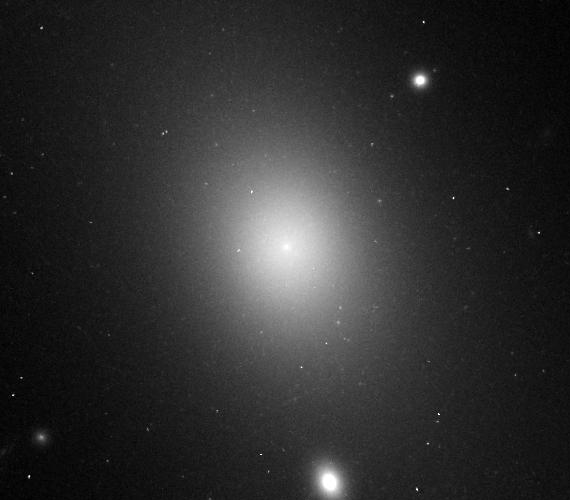 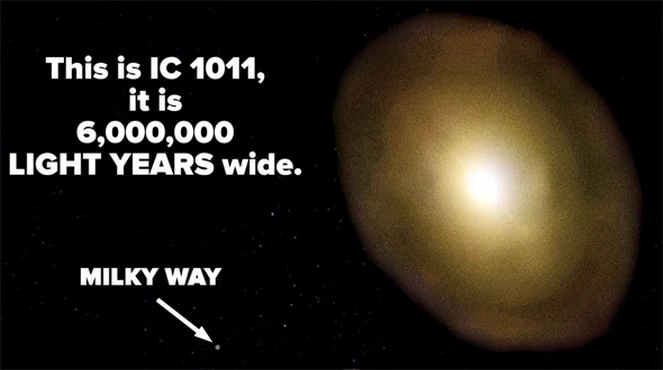 A commenter on cloudynights.com said this about IC 1101:

… it’s 14th magnitude, but the IC catalog has it at 15. It’s about 1.2 by 0.6 arc minutes, but that includes some of its outer regions. So look for a faint, stretched out, Jupiter-sized glow. I don’t think it’s hopeless in an 8-inch ‘scope if your skies are really excellent and your eyes fully adapted. I think magnification will be your friend, so the 9mm sounds like a good choice to me. But it’s going to be a tough target.

#Israel will be just the 4th nation EVER to land on the moon — this Thursday! This pic was shot by the #Beresheet spacecraft while in lunar orbit last week. We can't wait!#IsraelToTheMoon pic.twitter.com/mzbMMhwVWN

The northern coronal hole remains closed (for the most part); the southern hole continues to remain open. Spaceweather.com says: “A minor solar wind stream is buffeting Earth’s magnetic field on April 9th, and this is causing geomagnetic unrest just below the level of a G1-class geomagnetic storm. Arctic sky watchers should be alert for auroras mixed with waxing Spring twilight.”

A lot of prominence activity near sunspot AR2738, with another long-lived prominnece on the other side of the Sun’s limb. You can SEE flares crackling around the sunspot!

Researchers have found "rain" on the Sun — solar material cascading down magnetic loops — in a place they never expected it. This new discovery could provide a missing link between two of the biggest mysteries in solar science. https://t.co/GTRASbLkan pic.twitter.com/XWLsQn20yK

Whoa! #fireball this morning from East Barnet station (9 March 2019 at 02:18 AM) pic.twitter.com/AgbOvZEs5P

Perihelion #2: successfully completed! ✅ #ParkerSolarProbe says that its systems are healthy after its second close approach to the Sun on April 4. Details: https://t.co/HQMiG5I38g pic.twitter.com/wbB7HPJK48

Want to see Bennu like I do? Last week, I executed a south/north flyby for our mapping campaign. While flying over the northern hemisphere, I rotated south to point PolyCam down toward the equator – and this is how the equatorial ridge looked.
Details: https://t.co/Y9D5bA0WBL pic.twitter.com/SAuiqGnx8Z

Have you heard? I’ve been nominated for @TheWebbyAwards! I love connecting with you on social media, and helping make #Mars a real place. Voting is open through April 18.

(But they’re still having issues with the drill…)

Remember when I was eclipse-watching a couple weeks ago? @MarsCuriosity has seen the #Martian moons too! Plus, with her solar filter, she can look directly at them. Check out all three views: https://t.co/LsBW8HNZ9m pic.twitter.com/W7oSExq74w

?#Temperature highlights for March from #Copernicus #C3S:
– Globally, nearly 0.7°C above average March for 1981-2010
– April 18 – March 19 was the warmest 12-month period on record for Europe
– More than 3°C above normal in parts of Europe
More detail ➡️https://t.co/NABgyaebzW pic.twitter.com/N3dT9QinCG