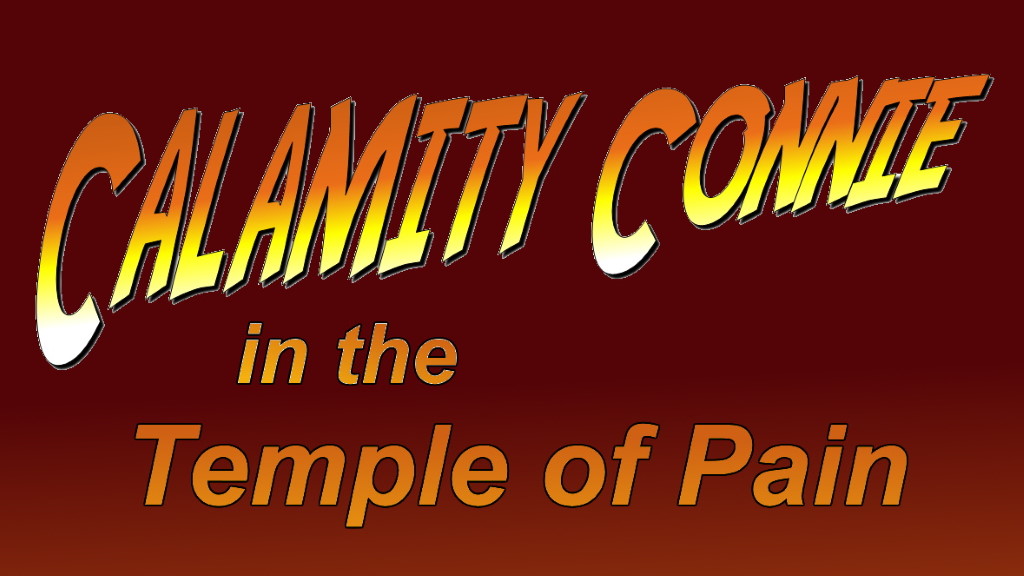 As I was working on images for this post yesterday, I had to rush my wife Connie to the hospital for an emergency appendectomy; hospital rules would not allow me to see her after she was admitted, and it was several hours before she was able to get into the operating room… Her appendix was removed and had not ruptured – which is what we were hoping for. As I’m writing this, she is eating for the first time in 24 hours, and it looks like they are starting on release paperwork. 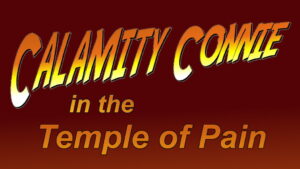 I love my wife dearly, but if she had a mutant super-power, it would be the ability to have calamitous things happen to her, or around her, frequently! Honestly, I’ve joked about this oddity for decades! Every time she gets hurt, I hum the first few bars of the “Raiders of the Lost Ark” theme! That theme song is Connie’s ringtone on my smartphone – I even made an older version of this banner for her – decades ago!

What do I mean? Well… random injuries galore, a mysteriously snapped tendon walking down stairs, that thing that looked like a heart attack, but after scoping and a stress test turned out to be – who knows what? And the engine fire that consumed her D.C. tour bus filled with her middle school students – which she heroically got all off without injury… depositing them on to the side of a hill… during a thunderstorm! Seriously!

Saturn and Jupiter appear in the southern sky around midnight – I wanted the contrast what this scene would look like from suburban skies, verses a dark sky site.

The Moon appears with Saturn and Jupiter  the southern sky after sunset for the next several days. 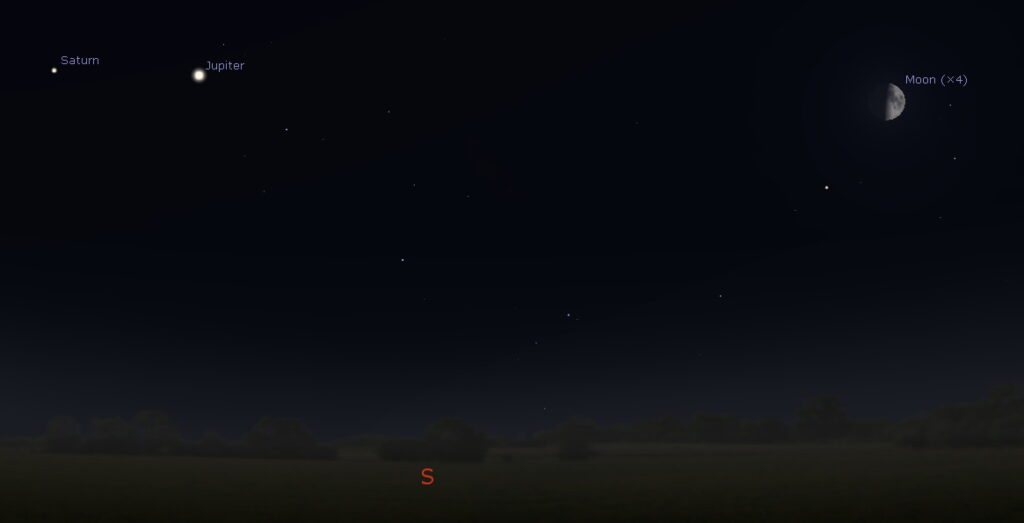 Saturn and Jupiter appear the southern sky with the Moon at 9:30 PM on Aug. 25th. Credit: Stellarium / Bob Trembley.

Mars appears in the eastern sky during the early morning hours this week. 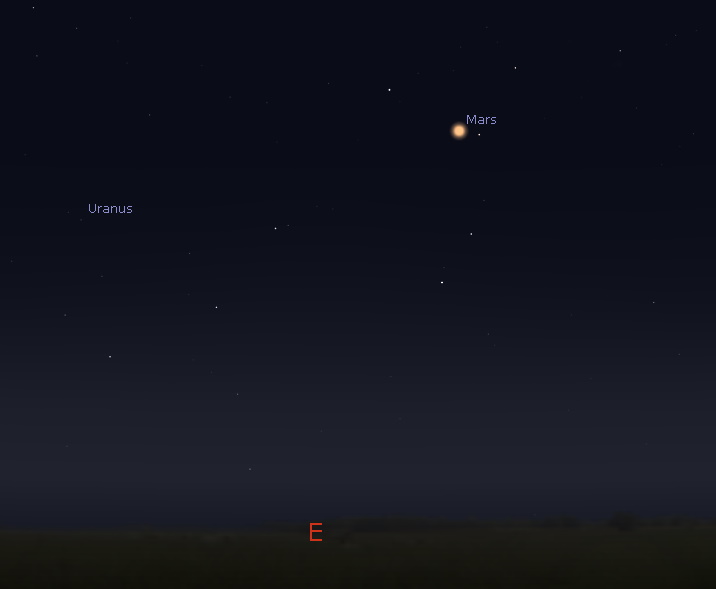 Uranus and Mars appear in the eastern sky at midnight this week. Credit: Stellarium / Bob Trembley.

Before dawn, Mars will appear high in the southern sky. 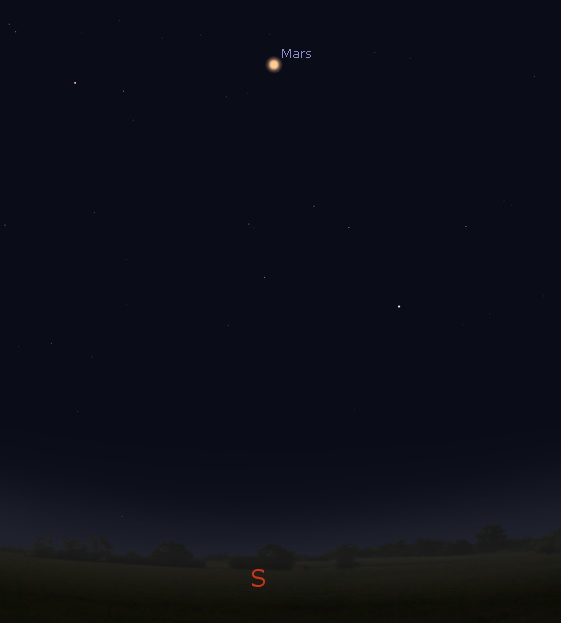 Mars appears high in the southern sky at 5:00 AM this week. Credit: Stellarium / Bob Trembley.

The planet Venus appears on the eastern horizon with the constellation Orion during the predawn hours.

The Andromeda galaxy (M31) appears almost directly overhead at 4:30 AM this week.

The first quarter Moon occurs on Aug. 25th – it is visible high in the southern sky in early evening.

After the 25th, the Moon will be a waxing gibbous, visible to the southeast in early evening, and up for most of the night. 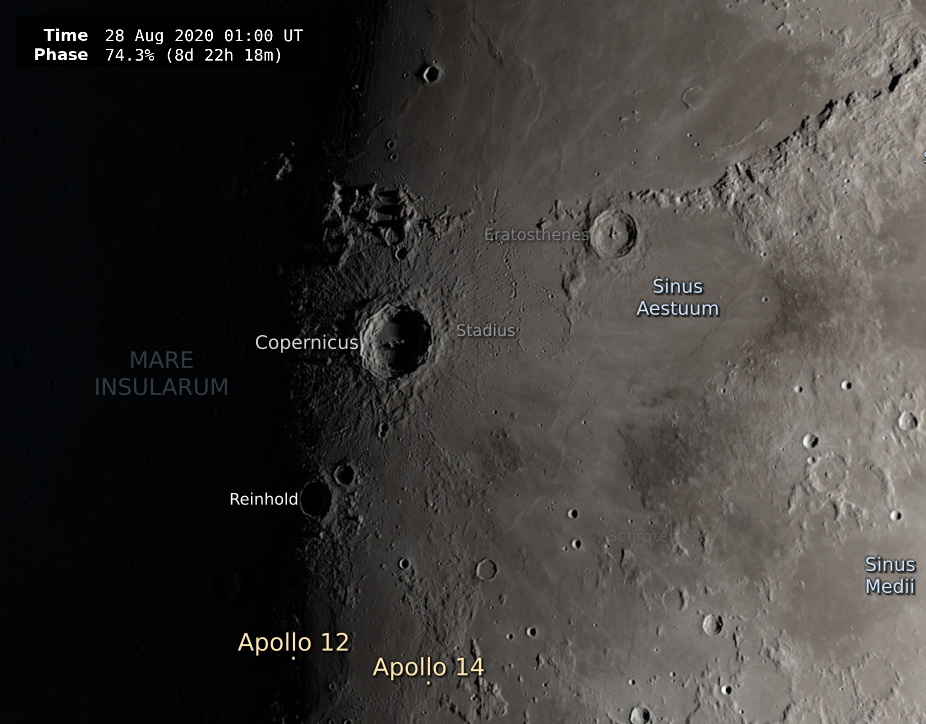 International Artist's Day may be 2 months away, but you can celebrate early by submitting your lunar-inspired artwork to the official International #ObserveTheMoon Night Flickr page https://t.co/JJOx0SICyU through September 26. ? Art by Muskan Choradia pic.twitter.com/T0GTodgcRg

Several prominences and a lot of coronal activity on the Sun’s limb recently; see if you can spot the eclipse in a couple frames in the video below.

Our ACE mission launched 23 years ago today! ? The ACE spacecraft orbits between the Sun and Earth, about a million miles from our planet, where it monitors and studies solar wind and particles streaming toward us from the Sun. https://t.co/I4wYgA5JP1 pic.twitter.com/8AafYnTjpJ 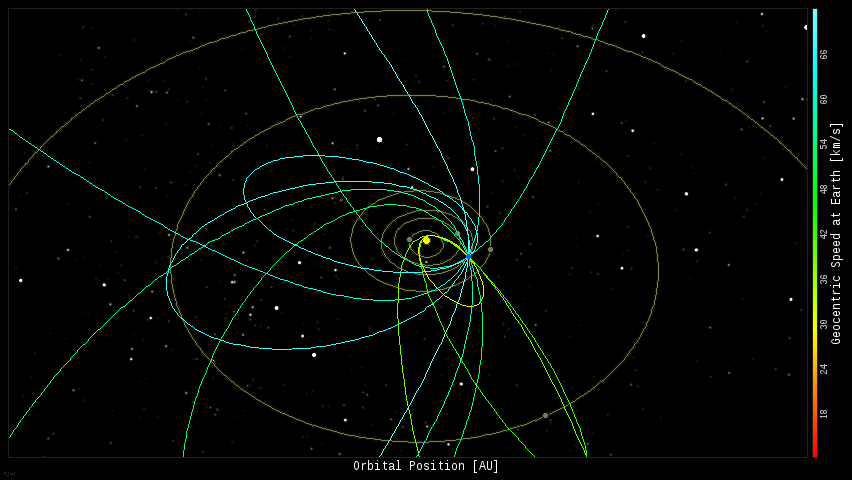 Exciting news! A new paper led by @haaadry just came out that outlines how we're setting up a Global #Fireball Observatory to find out where #Space #Rocks come from & the fun things we hope to discover. You can read all about it: https://t.co/ScScbERk33 @UofGGES @ImperialRSM 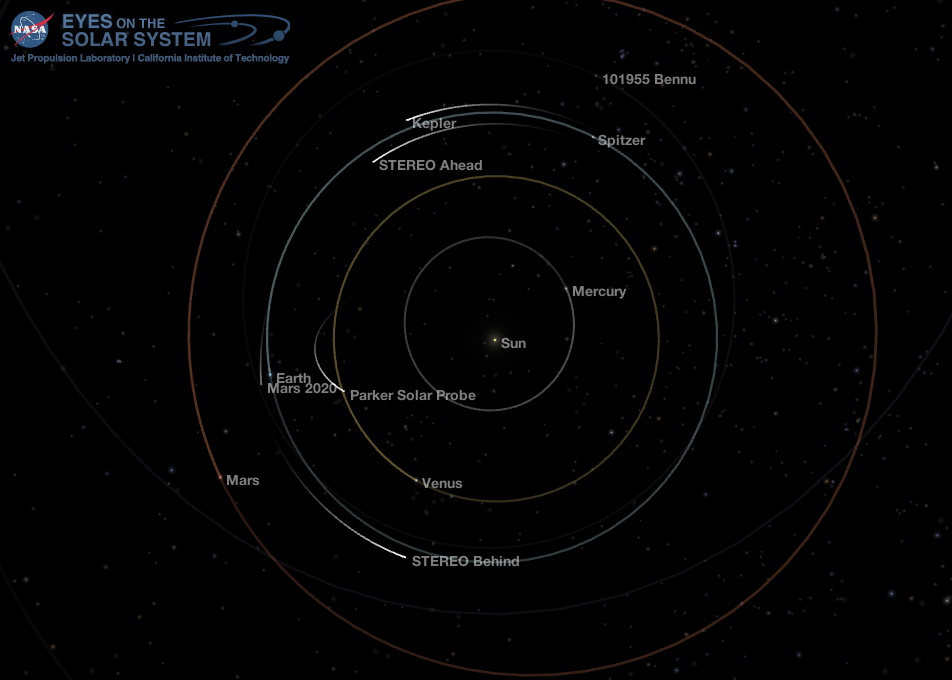 Position of the planets and a couple spacecraft in the inner solar system, 2020-08-25. Credit: NASA Eyes on the Solar System / Bob Trembley. 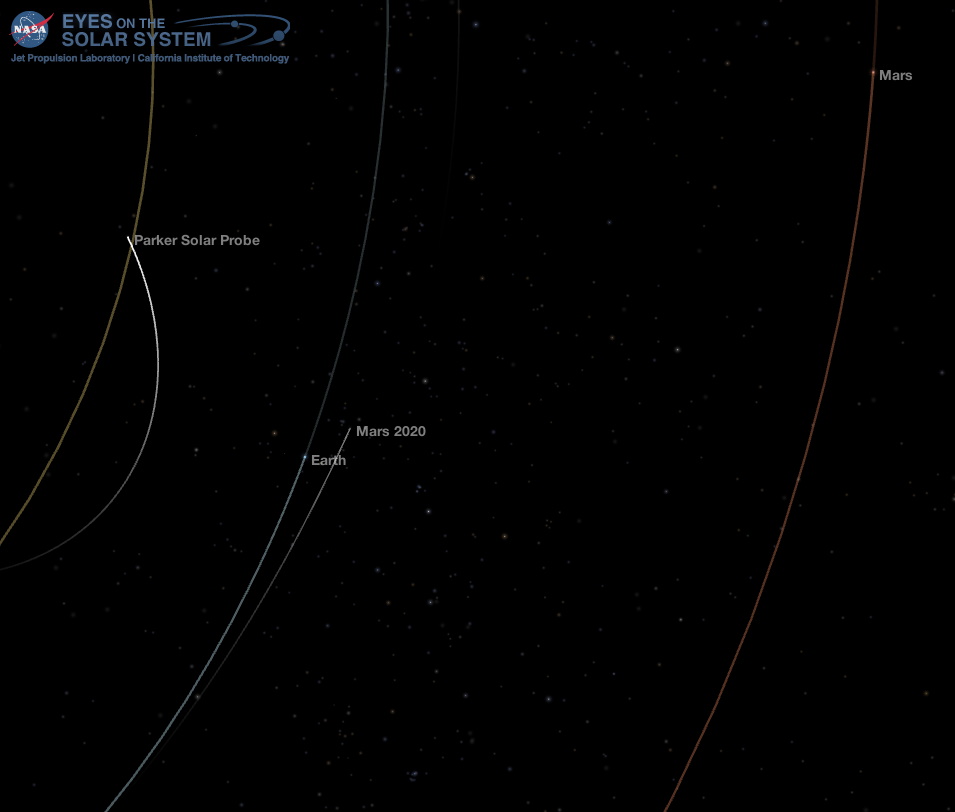 Position of the Mars 2020 Perseverance Rover and the Parker Solar Probe on 2020-08-25. Credit: NASA Eyes on the Solar System / Bob Trembley. 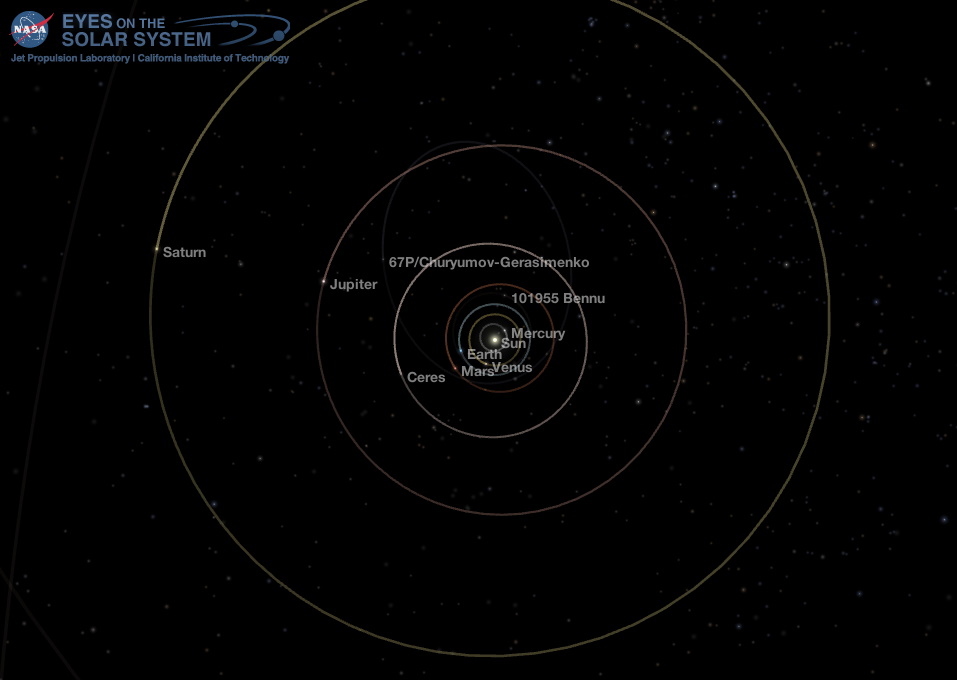 Position of the planets in the middle solar system, 2020-08-25. Credit: NASA Eyes on the Solar System / Bob Trembley.

Position of the planets, some dwarf planets and some transneptunian objects in the outer solar system – dwarf planet Haumea is highlighted: 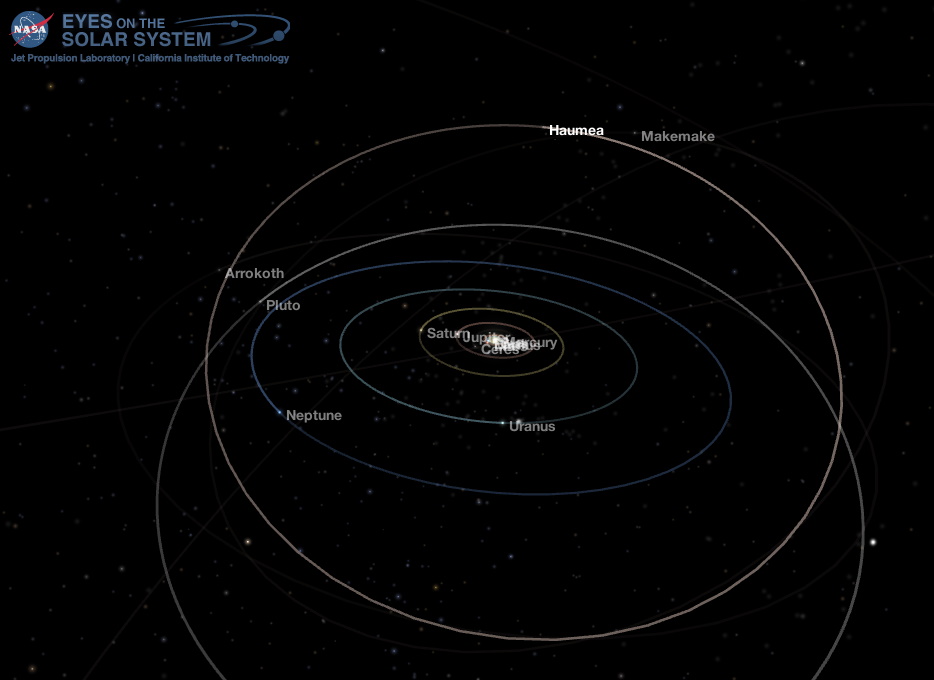 Position of the planets and some transneptunian objects in the outer solar system, 2020-08-25 (oblique-view). Credit: NASA Eyes on the Solar System / Bob Trembley. 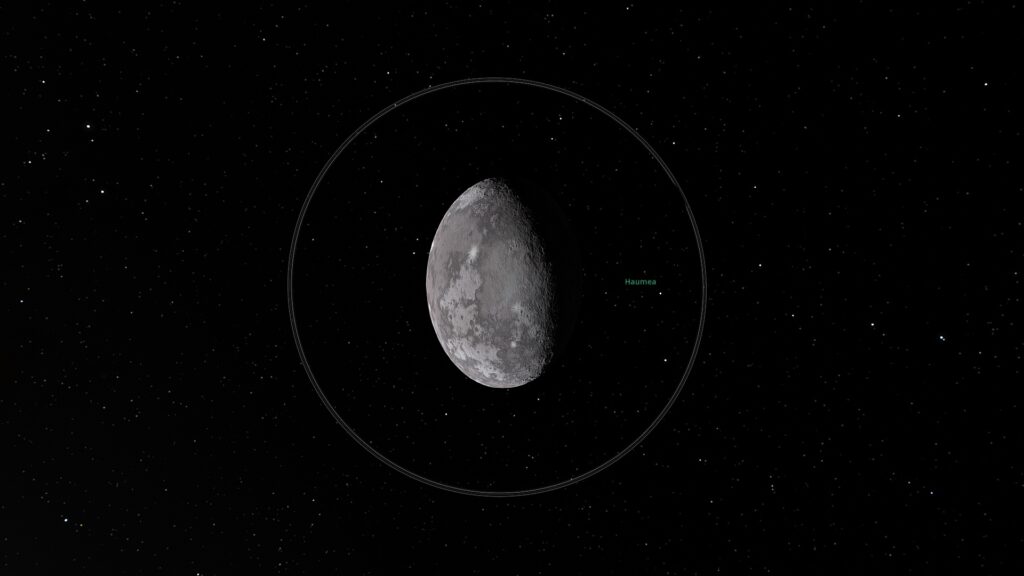 Haumea (minor-planet designation 136108 Haumea) is a likely dwarf planet located beyond Neptune‘s orbit. It was discovered in 2004 by a team headed by Mike Brown of Caltech at the Palomar Observatory in the United States and independently in 2005 by a team headed by José Luis Ortiz Moreno at the Sierra Nevada Observatory in Spain, though the latter claim has been contested. On September 17, 2008, it was named after Haumea, the Hawaiian goddess of childbirth, under the expectation by the International Astronomical Union (IAU) that it would prove to be a dwarf planet. It is probably the third-largest known trans-Neptunian object, after Eris and Pluto.

Haumea’s mass is about one-third that of Pluto, and 1/1400 that of Earth. Although its shape has not been directly observed, calculations from its light curve are consistent with it being a Jacobi ellipsoid (the shape it would be if it’s a dwarf planet), with its major axis twice as long as its minor. In October 2017, astronomers announced the discovery of a ring system around Haumea, representing the first ring system discovered for a trans-Neptunian object. Haumea’s gravity was until recently thought to be sufficient for it to have relaxed into hydrostatic equilibrium, though that is now unclear. Haumea’s elongated shape together with its rapid rotation, rings, and high albedo (from a surface of crystalline water ice), are thought to be the consequences of a giant collision, which left Haumea the largest member of a collisional family that includes several large trans-Neptunian objects and Haumea’s two known moons, Hiʻiaka and Namaka.  – Wikipedia

There is an lot more about Haumea in this Wikipedia article. 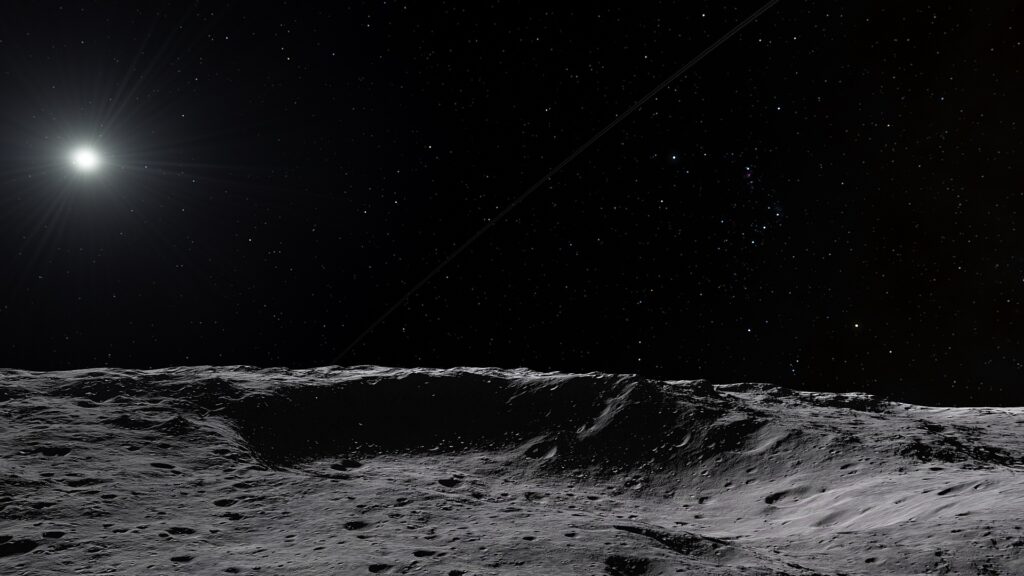 Artist impression from the surface of Haumea looking towards the Sun – the rings are faintly visible. Credit: SpaceEngine / Bob Trembley

Asteroid Bennu may be a rocky world, but samples of it could help scientists better understand how #OceanWorlds have formed within our Solar System.

Tropical Storm Laura was viewed from external station cameras prior to making landfall on Cuba on Sunday, Aug. 23. pic.twitter.com/s1NW06BjXF

Follow me on my journey to Mars with @NASA_Eyes. The web app provides you with the precise location of my whereabouts in real-time, using real data. I’m learning space is a big place and I’m delighted to have you see how my team and I navigate it. https://t.co/EWJsfNdPxk pic.twitter.com/DGZVsupkix

Sea levels are rising faster than at any time in the 20th century, a direct result of global warming. In a new study, @NASA scientists have more accurately measured sea level rise since 1900, with rates since 2000 being unprecedented. https://t.co/y4K8PLQHtS 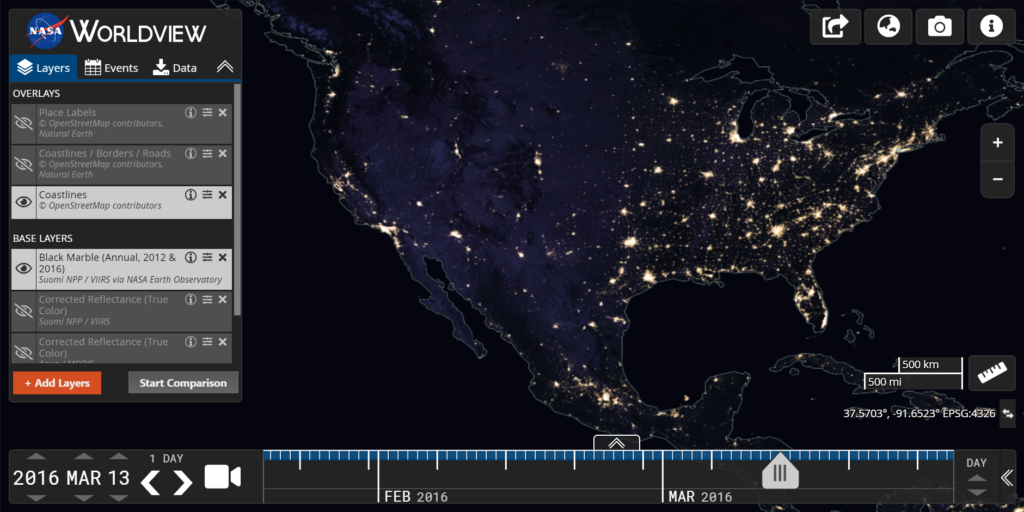 I’m taking a break this week from my tour of nearby stars, and wanted to talk about something I’ve mentioned a bazillion times: Kerbal Space Program. Yesterday, I reached 4000 hours in Kerbal Space Program on Steam! My time in KSP is actually much greater than 4K – I helped beta test KerbalEDU, and I ran KSP offline several times while on various trips.

I wrote about KSP on this site in 2015, heaping praise on the app, and exclaiming how fantastically educational it can be. Time has not diminished my love for Kerbal Space Program! The developers of KSP recently partnered with the European Space Agency (ESA); KSP now has new parts and missions mirroring the Rosetta mission to comet 67P/Churyumov–Gerasimenko, and the current joint ESA/JAXA BepiColombo mission to Mercury! 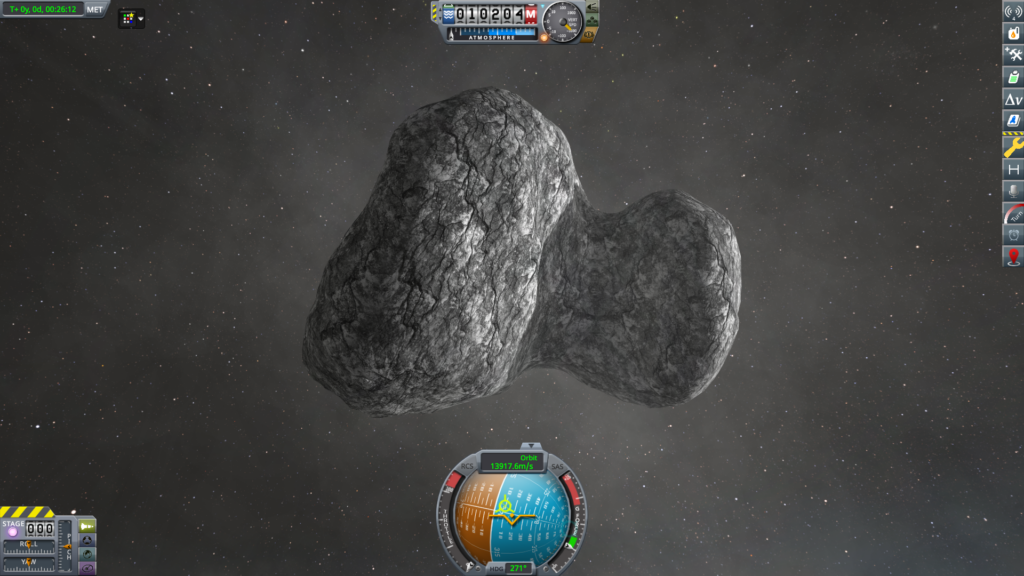 NOTE: Stellarium version 0.20.2 has been released! Get it free here: http://stellarium.org/en/