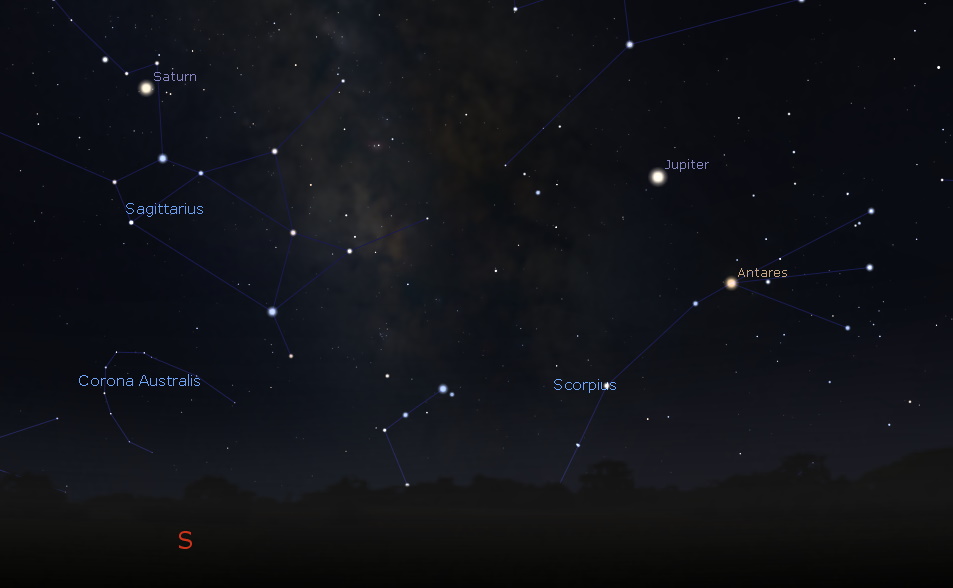 After my presentation at the Warren Public Library last week, a young woman asked if I was scheduled to speak there again. I told her I hadn’t spoken with the library about presenting again, but I do have a ton I could present. She said “I’m going to suggest to them that they get you back – you’re really good!” AwwwWWwwww! How nice! 🙂 I showed several different space software apps, and gave a virtual “Tour of the Stellar Neighborhood” using SpaceEngine; I took the audience over the rings of Saturn, flew like a drone over the surface of the Moon, orbited the Ring Nebula, flew through a gobular cluster, showed the two stars of Polaris orbiting each other in accelerated time, and more! I LOVE giving this presentation; I’m scheduled to give this talk to a bunch of astronomers at the meeting of the Warren Astronomical Society on Sept. 19th!

In the continuing saga of “selling my home” – the realtor came over yesterday and was completely floored at how much we’ve done to prep the house in the last few weeks – The upper two floors are practically empty; our home of 22 years went on the market yesterday! I KNOW we need to do it, but I’m not handling this move very well… A huge and continuing thank you to my daughter Amanda and son-in-law Sam for all the help they’ve given us with fixes and repairs.

Saturn, Jupiter and Antares in the southwestern sky at midnight on Sep. 3, 2019. Credit: Stellarium / Bob Trembley.

But catch Jupiter before midnight, as it sets in the southwest shortly after then. 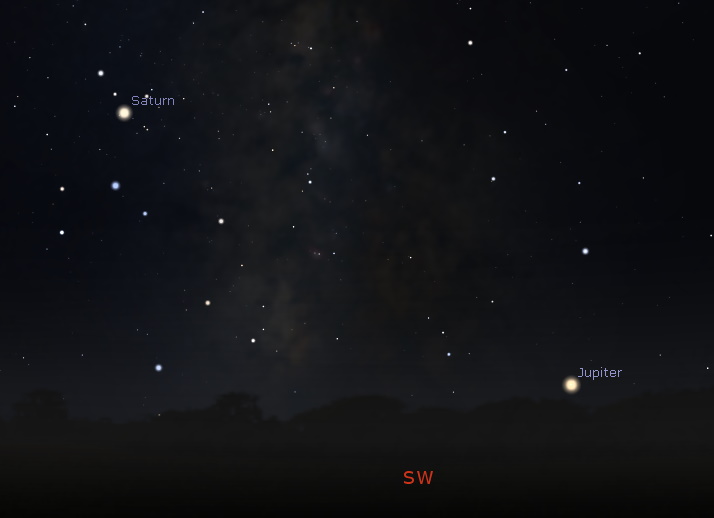 Saturn, Jupiter and Antares in the southwestern sky at midnight on Aug. 27, 2019. Credit: Stellarium / Bob Trembley.

The waning crescent Moon appears in the southeastern skies at dawn On Aug. 27th & 28th.

Mercury continues to head away from us in its orbit, and will soon be lost in the light of the dawn. 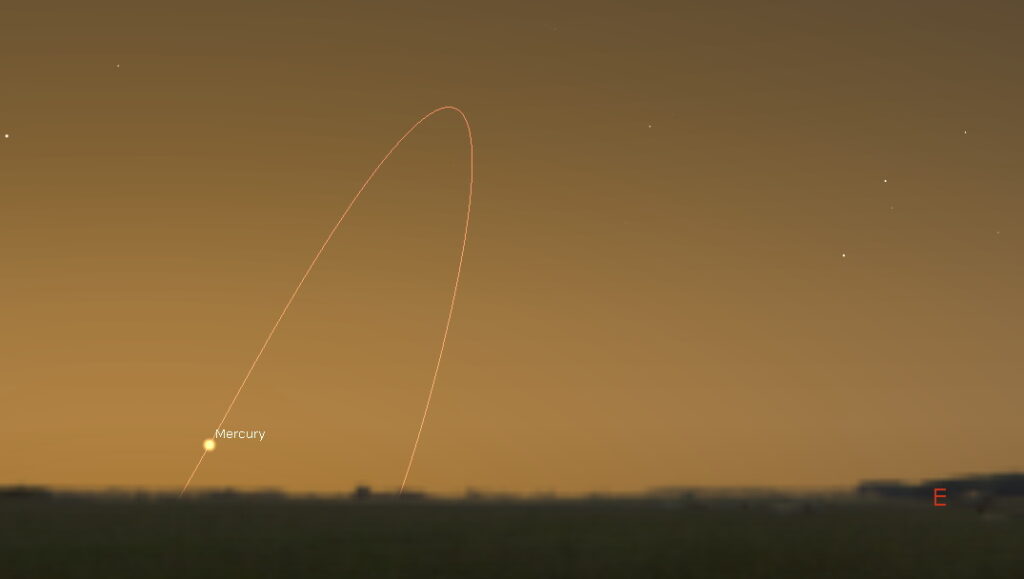 The waxing crescent Moon appears in the southwestern sky at dusk on Sept. 1st and 2nd.

“Messier 2 or M2 (also designated NGC 7089) is a globular cluster in the constellation Aquarius, five degrees north of the star Beta Aquarii. It was discovered by Jean-Dominique Maraldi in 1746, and is one of the largest known globular clusters.” – Wikipedia 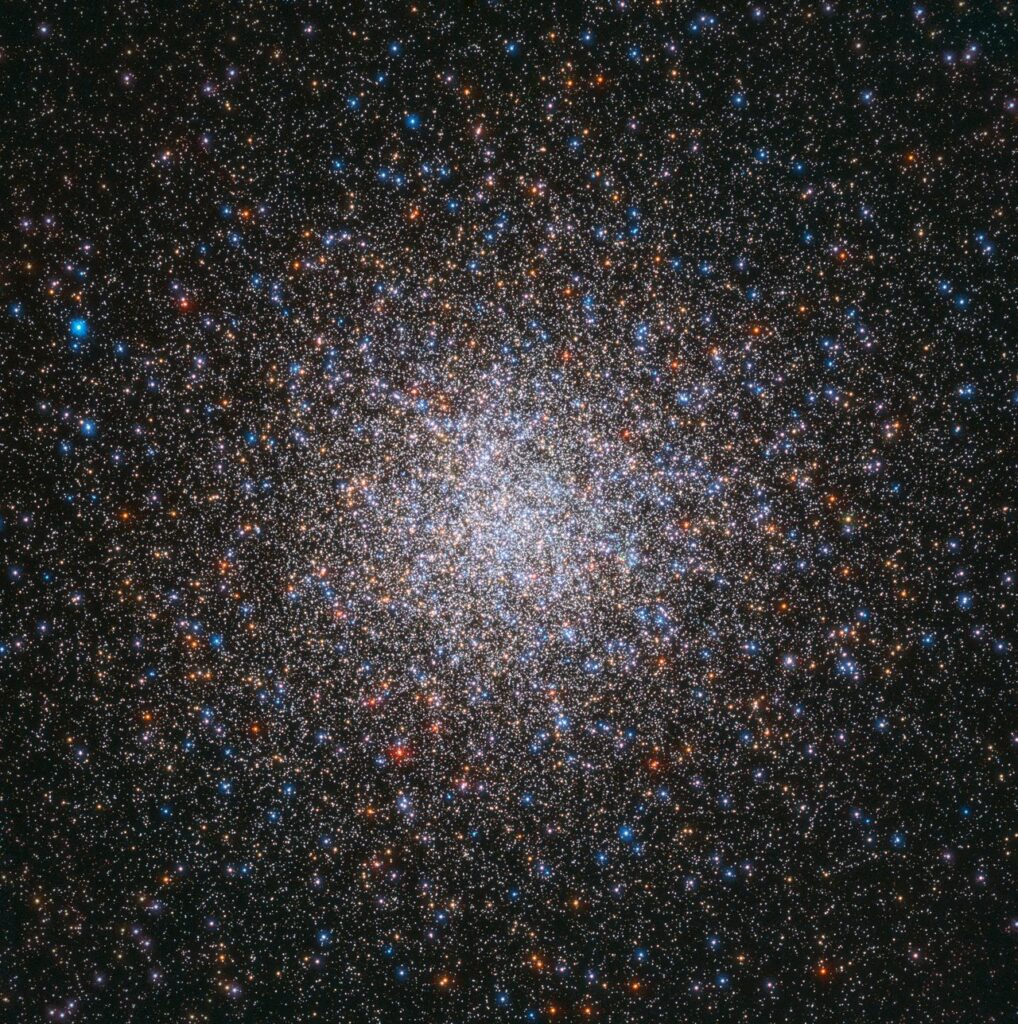 Star clusters are commonly featured in cosmic photoshoots, and are also well-loved by the keen eye of the NASA/ESA Hubble Space Telescope. These large gatherings of celestial gems are striking sights — and the subject of this Picture of the Week, Messier 2, is certainly no exception. Messier 2 is located in the constellation of Aquarius (The Water-Bearer), about 55 000 light-years away. It is a globular cluster, a spherical group of stars all tightly bound together by gravity. With a diameter of roughly 175 light-years, a population of 150,000 stars, and an age of 13 billion years, Messier 2 is one of the largest clusters of its kind and one of the oldest associated with the Milky Way. Most of the cluster’s mass is concentrated at its centre, with shimmering streams of stars extending outwards into space. It is bright enough that it can even be seen with the naked eye when observing conditions are extremely good. 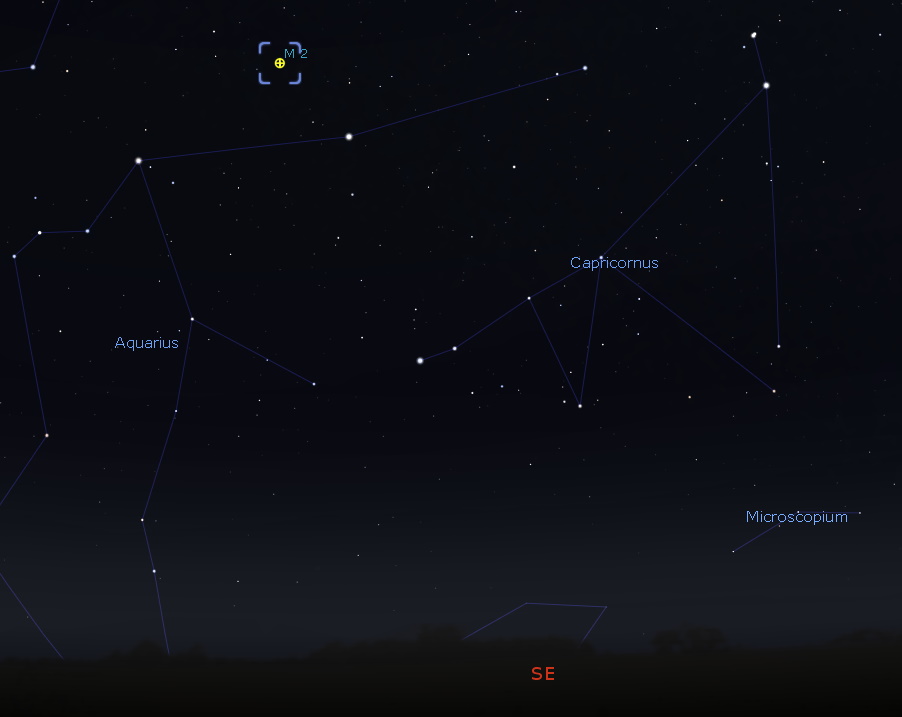 The new Moon occurs on August 30th, and will not be visible.

After August 30th, the Moon will be a waxing crescent, returning to the southwest sky at dusk.

As we prepare to send the first woman to the Moon by 2024, we honor #WomenAtNASA who contribute to knowledge, exploration and discovery. Celebrate #WomensEqualityDay with us and learn about trailblazers who inspire: https://t.co/QH065xt105 pic.twitter.com/yWi65TYLkN

The Sun has been spot-free for 20 days – coronal holes are everywhere! The hole at the north pole has a tendril stretching down towards the equator, ans there are two large holes on the Sun’s face.

Position of the planets and a couple bodies in the inner solar system – I highlighted the Parker Solar Probe, which has re-crossed the orbit of Mercury: 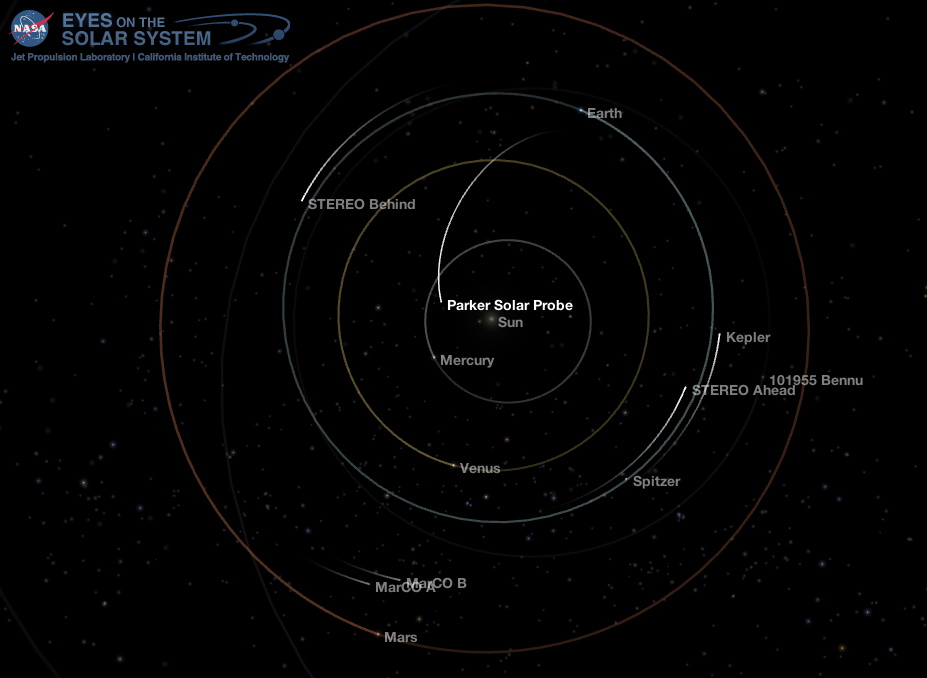 Position of the planets and a couple spacecraft in the inner solar system, Aug. 27, 2019. Credit: NASA Eyes on the Solar System / Bob Trembley. 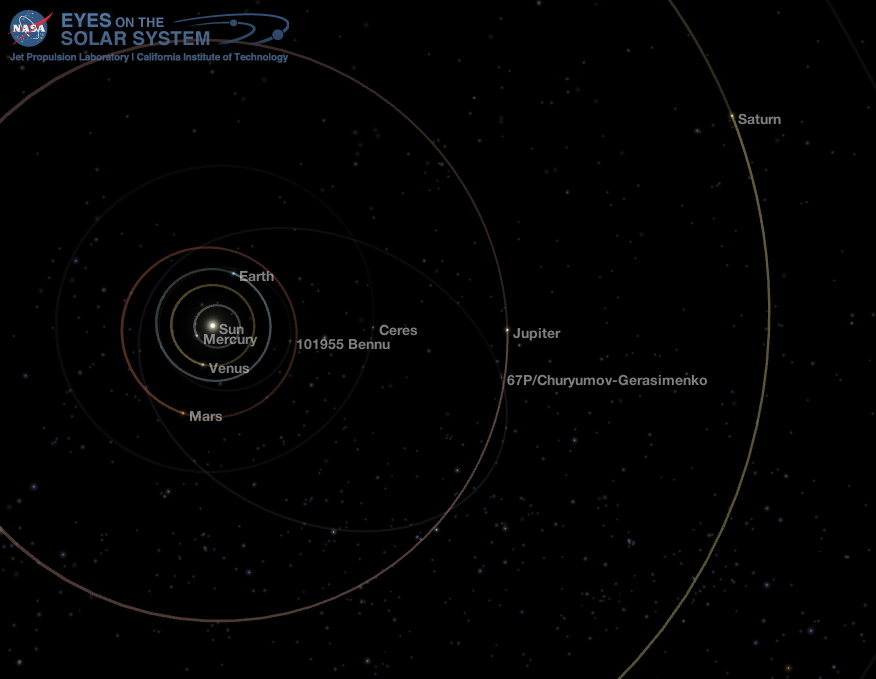 Position of the planets in the middle solar system, Aug. 27, 2019. Credit: NASA Eyes on the Solar System / Bob Trembley.

The Steam version of SpaceEngine has some downloadable content (DLC) with models and terrain for asteroids Vesta, Ceres and comet 67P – you can literally “fly like a drone” over the surfaces of these objects. Here’s Asteroid Vesta from above the “Snowman crater” complex in SpaceEngine: 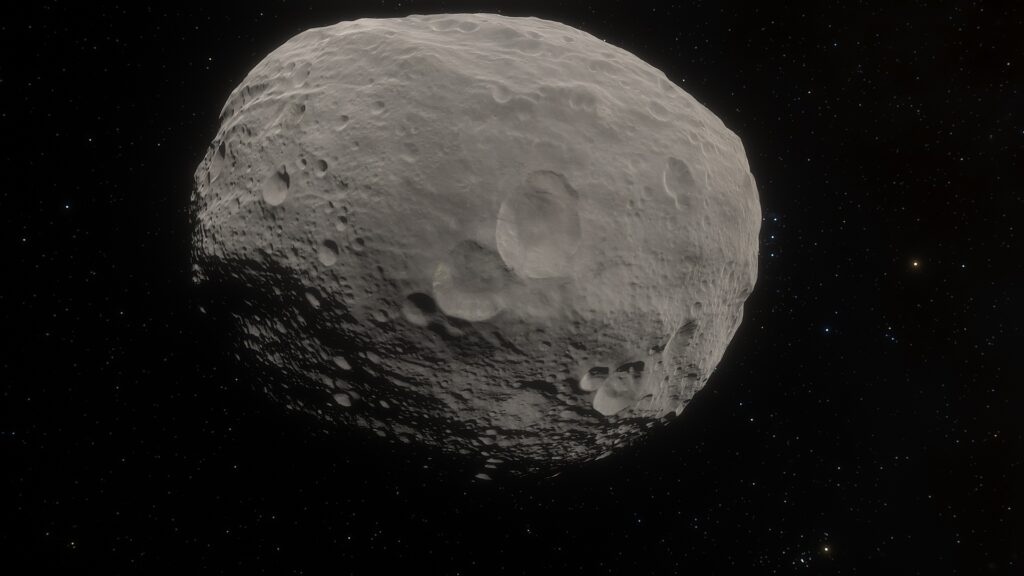 Above the “Snowman Craters” on Vesta. Credit: SpaceEngine / Bob Trembley.

This shot is from the surface of asteroid Vesta, between two lobes of the “Snowman crater.” 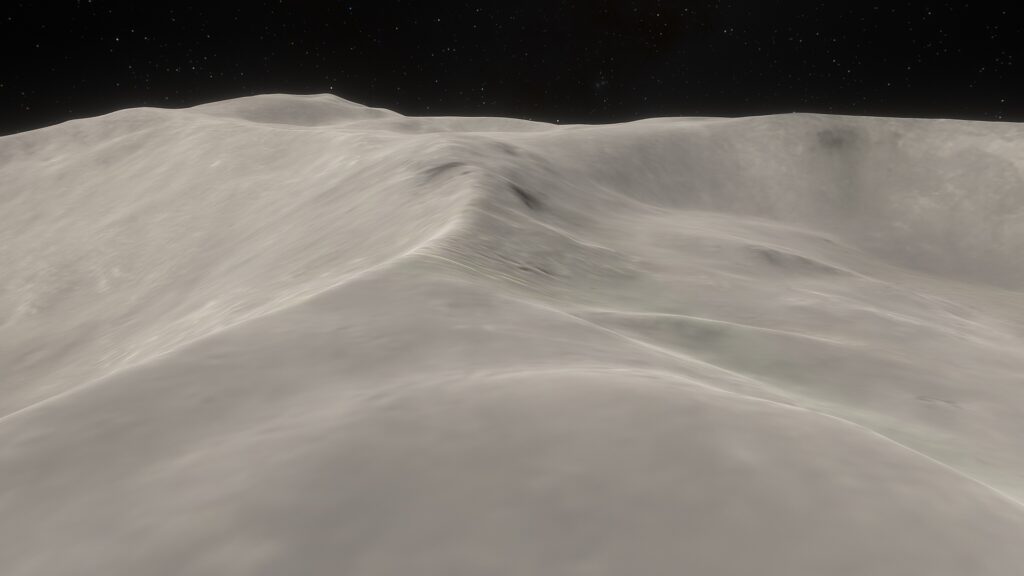 On the surface of Vesta, between two lobes of the Snowman on Vesta. Credit: SpaceEngine / Bob Trembley.

This shot shows the rugged terrain of asteroid Vesta: 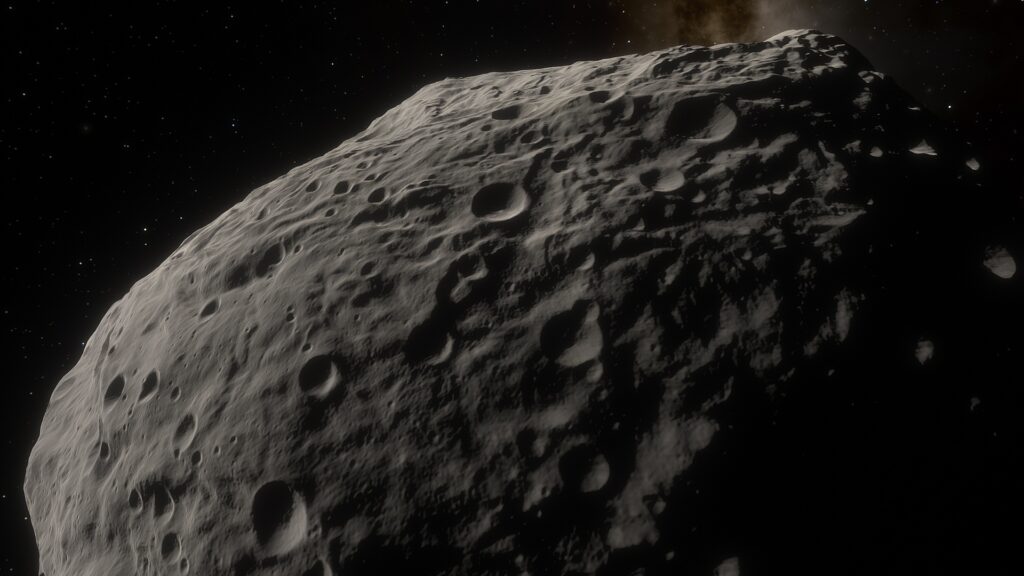 This shot is from the surface of one of the two lobes of comet 67/P-Churyumov–Gerasimenko -looking at the other lobe: 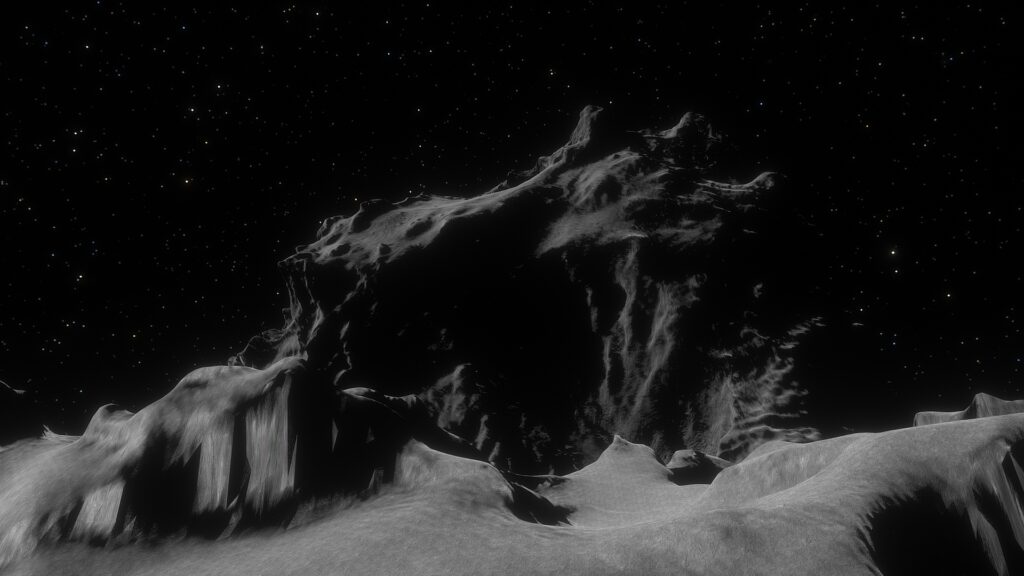 On the surface of comet 67/P-Churyumov–Gerasimenko looking towards one of the comet’s lobes. Credit: SpaceEngine / Bob Trembley.

Position of the planets and a couple bodies in the outer solar system – I highlighted 2014 MU69, nicknamed Ultma Thule: 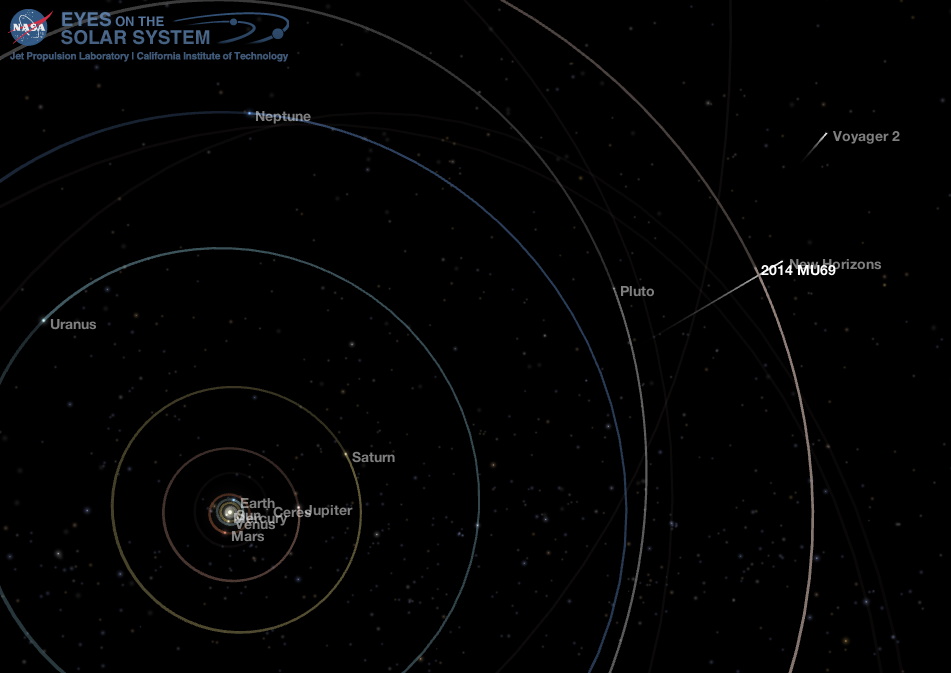 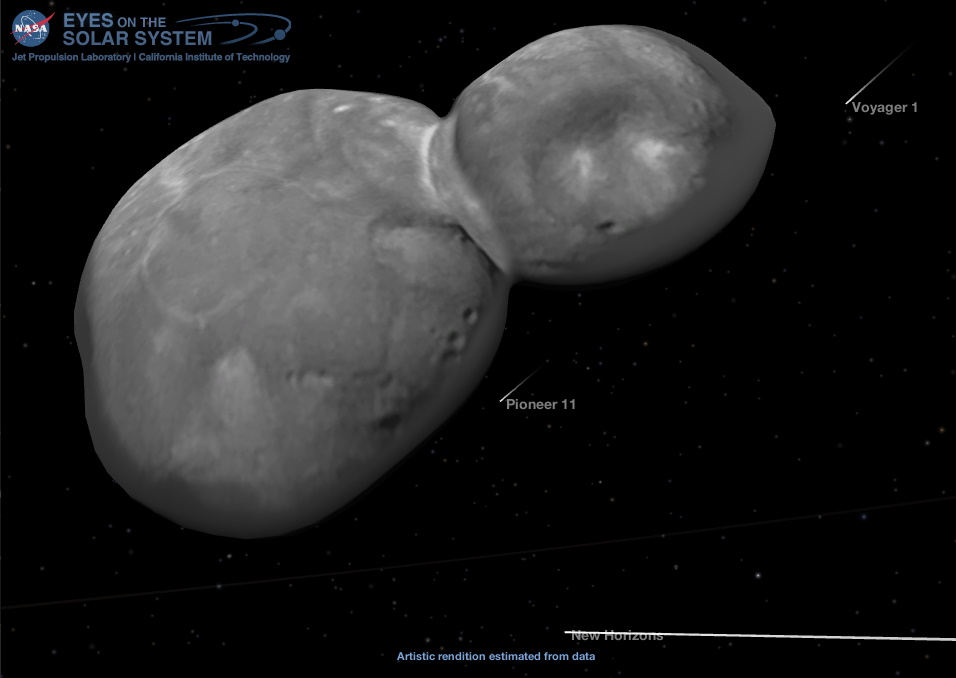