I mentioned the Starlink satellite constellation to students in my after-school astronomy and space science club, and afterwards got into a discussion about space junk. I told the students that when I was their age, there were only a handful of man-made objects in Earth orbit. Today, there are thousands of objects in orbit – some useful, many not so much.

Many satellites and space probes require multi-stage rockets to get them into orbit and/or to their destination. When a rocket stage is spent, it decouples – and continues in whatever orbit the vessel was currently in at that moment. If the vessel was in a sub-orbital trajectory, the spent stage either burns up, or is guided back to a safe landing – as has been known to happen. If the vessel was in orbit at the moment of decoupling, the spent stage remains in that orbit, becoming space debris. When a satellite or space probe has reached the end of its life, it can simply stay where it is, or if it is in low-Earth orbit, it can be de-orbited. It the satellite is in high-Earth orbit, it can be moved outward into a graveyard orbit. Note the use of the word “can;” there really aren’t any “rules or regulations” or international governing agencies to cover this.

The European Space Agency (ESA) has a “Space debris by the numbers” website: https://www.esa.int/Safety_Security/Space_Debris/Space_debris_by_the_numbers. At the time of this writing, the final statistics on that page show the number of debris objects estimated by statistical models to be in orbit:

One might wonder, with so much junk in orbit, have there been any satellite collisions? The simple answer is yes, several.

The Kessler syndrome (also called the Kessler effect, collisional cascading, or ablation cascade), proposed by the NASA scientist Donald J. Kessler in 1978, is a scenario in which the density of objects in low Earth orbit (LEO) is high enough that collisions between objects could cause a cascade in which each collision generates space debris that increases the likelihood of further collisions. One implication is that the distribution of debris in orbit could render space activities and the use of satellites in specific orbital ranges difficult for many generations. – Wikipedia

The Kessler syndrome is illustrated effectively, if a bit theatrically, in this clip from the movie Gravity:

One of the things I learned from a NASA lecturer at a science fiction convention was:

Everything is space is moving REALLY FAST relative to everything else in space.

All that debris whizzing by the shuttle… yea, it’s actually going several kilometers per second relative to them… Ain’t no one gonna “get a visual” on that stuff… That speed is also the big problem: a grain of sand travelling at orbital velocities is a projectile with enough kinetic energy to damage satellites or, heaven forbid, an astronaut.

In an encouraging note, I saw this tweet last week from the European Space Agency discussing a mission to de-orbit space junk:

ClearSpace-1 will be the first space mission to remove an item of debris from orbit, planned for launch in 2025

As a player of Kerbal Space Program, I try to design my rockets to clean up their own garbage, but I still end up with spent stages and rocket bodies in high orbit when sending missions to far-off destinations.

A great resource to visualize all the stuff in space is with the interactive website: Stuffin.Space – the image below shows stuff orbiting near-ish the Earth, with the orbit of a Falcon rocket body highlighted in blue. You can just make out the nighttime lights of the U.S. beneath all the gray and red dots. 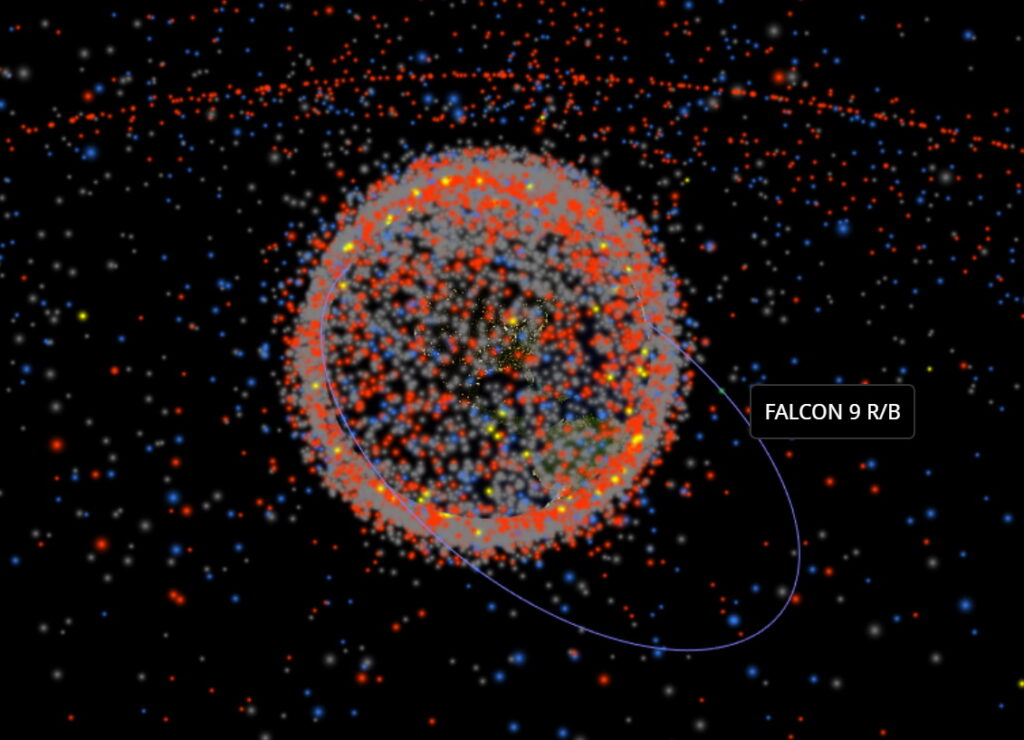 There will be a conjunction of Saturn and Venus in the southwestern sky after sunset (~5:30 PM) for the next week.

Mercury, Mars and the star Spica align above the southeastern horizon before sunrise this week – Mercury moves down toward the horizon a bit with each morning. 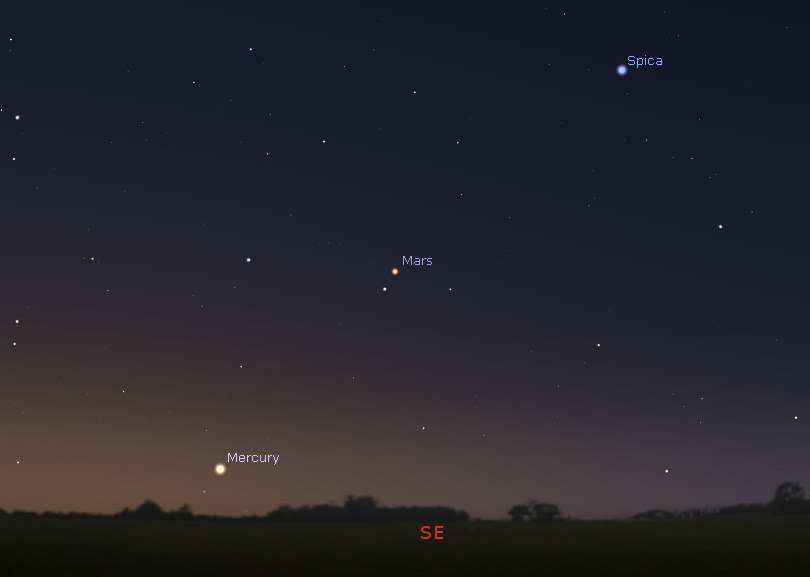 The Moon appears near the star Aldebaran above the eastern horizon after sunset on Dec. 11th; a bit higher above the horizon is star Capella and the Pleiades star cluster. 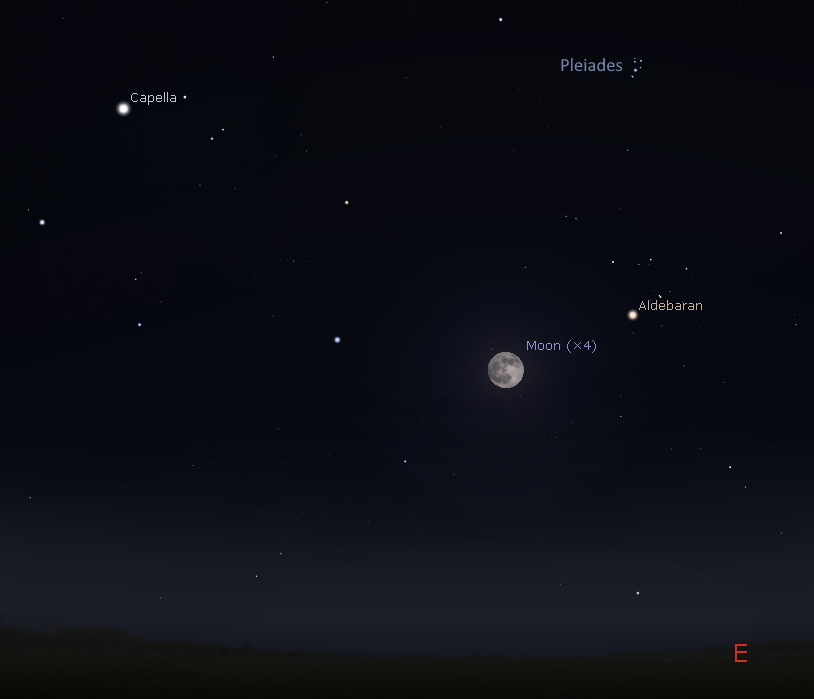 The Moon near the star Aldebaran above the eastern horizon after sunset on Dec. 11th; the Pleiades and the star Capella are also prominent. Credit: Stellarium / Bob Trembley 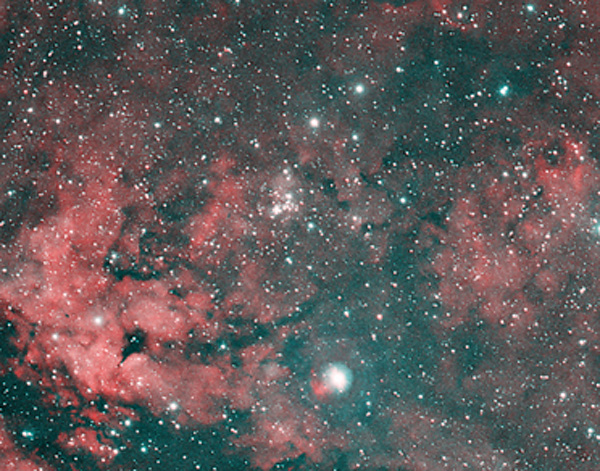 NGC 6910 is an open cluster in the constellation Cygnus. It was discovered by William Herschel on October 17, 1786. The cluster was also observed by John Herschel on September 18, 1828. It is a poor cluster and with prominent central concentration, with Trumpler class I2p. NGC 6910 is the core cluster of the stellar association Cygnus OB9.

NGC 6910 is located half a degree east-north east of Gamma Cygni, also known as Sadr. It may be physically related with the nebula IC 1318, which is also known as the Gamma Cygni nebula complex and lies at a similar distance, behind the galactic Great Rift. Cygnus OB9 is located within the Orion arm of the Milky Way. Cygnus OB9’s dimensions in the sky are 2.5 degrees by 1.5 degrees, which corresponds at its distance to 175×105 light years across. It includes many OB stars, along with supergiant stars, like the red supergiant RW Cygni. Gamma Cygni is a foreground star, lying at a distance of approximately 1,500 light years. Because it lies behind a number of molecular clouds, the light from NGC 6910 is dimmed by more than one magnitude. – Wikipedia

I discovered NGC 6910 quite by accident, scanning my 8″ Dobsonian reflector telescope around the star Sadr: 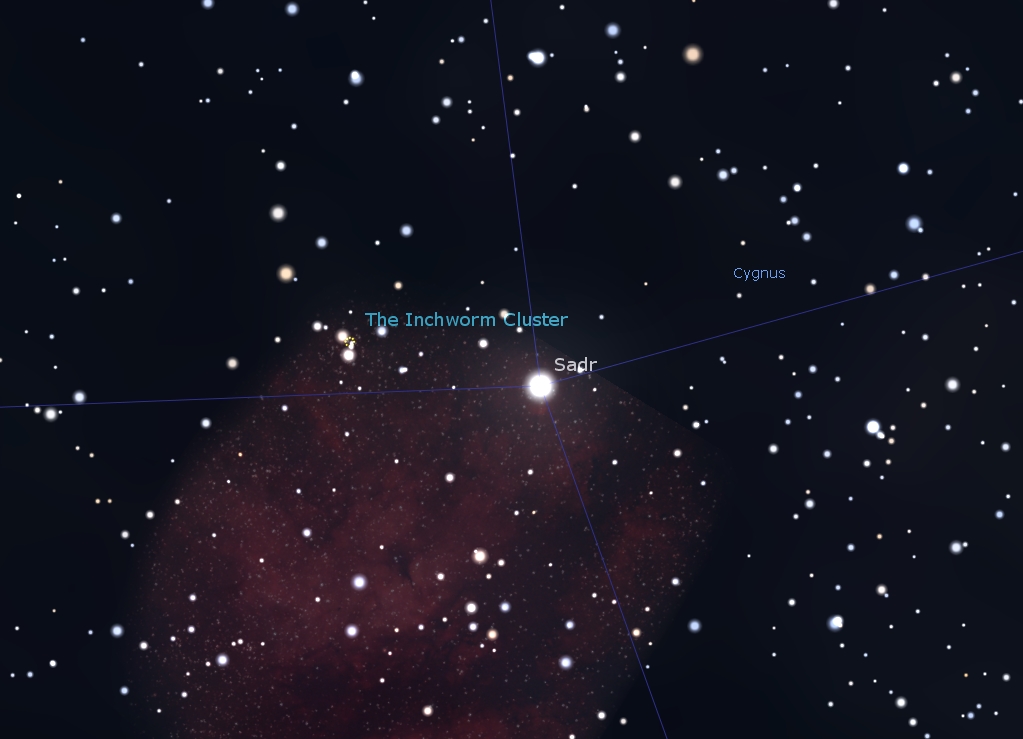 This is pretty much what the cluster looks like in my 8″ Dob: 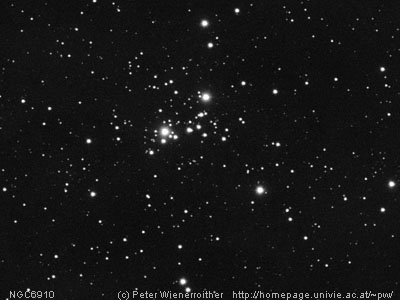 The Moon will be a waxing gibbous, visible to the southeast in early evening, up for most of the night.

The full Moon occurs on Dec. 12th, rising at sunset, visible high in the sky around midnight, and visible all night.

After Dec. 12th, the Moon will be a waning gibbous, rising after sunset, visible high in the sky after midnight, and visible to the southwest after sunrise.

My wife has used this countless times in her classroom at at conventions:

This is our favorite way to celebrate #NationalCookieDay.

Here's how to make your own cookie Moon phases: https://t.co/bBzlwP1UB5 pic.twitter.com/mgxBsJr8Ik

The Sun has been spotless for 26 days; coronal holes appear at both poles – the southern hole remains very large .

I seemed to have timed this post well – I got a disconnected prominence and some loops on the Sun’s today!

Scientists have just announced the first discoveries from #ParkerSolarProbe’s daring mission to the Sun. What they’ve learned has changed our understanding of the way the Sun releases material and particles, influencing Earth and the entire solar system: https://t.co/3WFfZStojM pic.twitter.com/Q3BZAV7lrT

It's mind-boggling to imagine the interstellar journey that brought Comet Borisov from a distant star system to ours. This simulation shows just its last 300,000 years of travel. https://t.co/mSawdLacG9 pic.twitter.com/FP4uiRtKfR 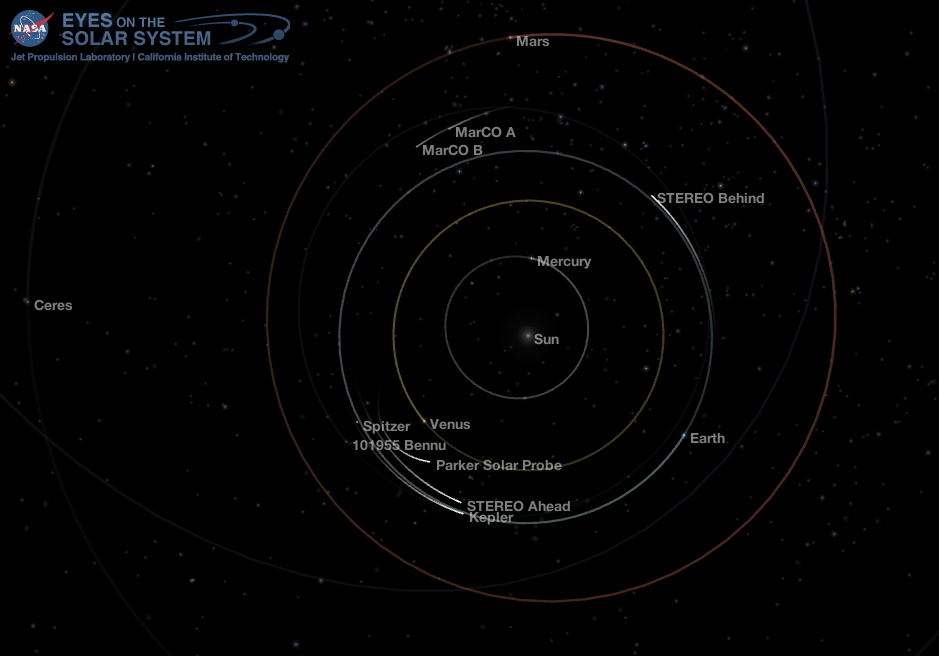 Position of the planets and some spacecraft in the inner solar system, Dec. 10, 2019. Credit: NASA Eyes on the Solar System / Bob Trembley. 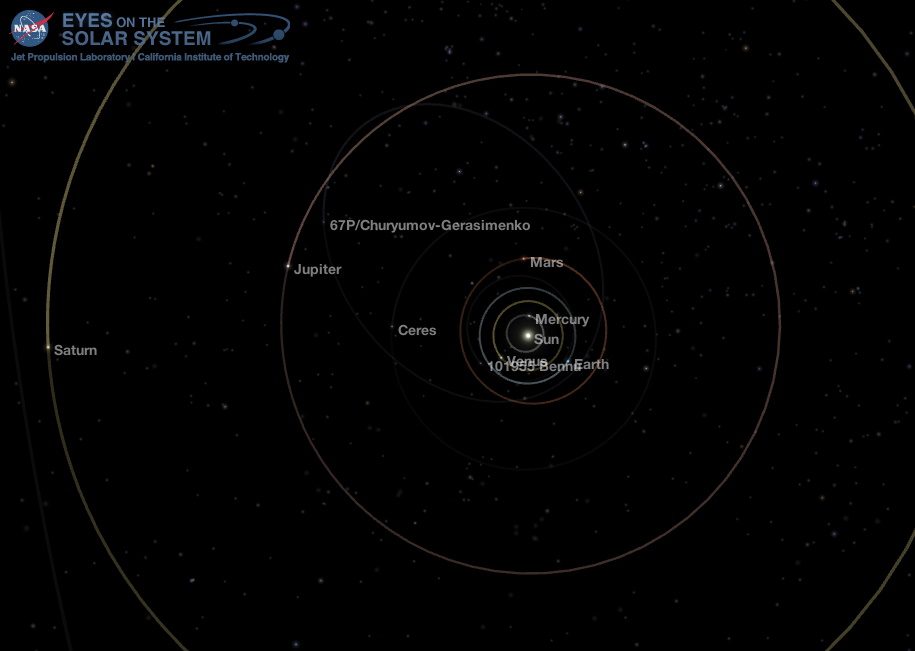 Position of the planets in the middle solar system, Dec. 10, 2019. Credit: NASA Eyes on the Solar System / Bob Trembley.

Position of the planets in the outer solar system, transneptunian object (TNO) and possible dwarf planet 120347 Salacia is highlighted in red: