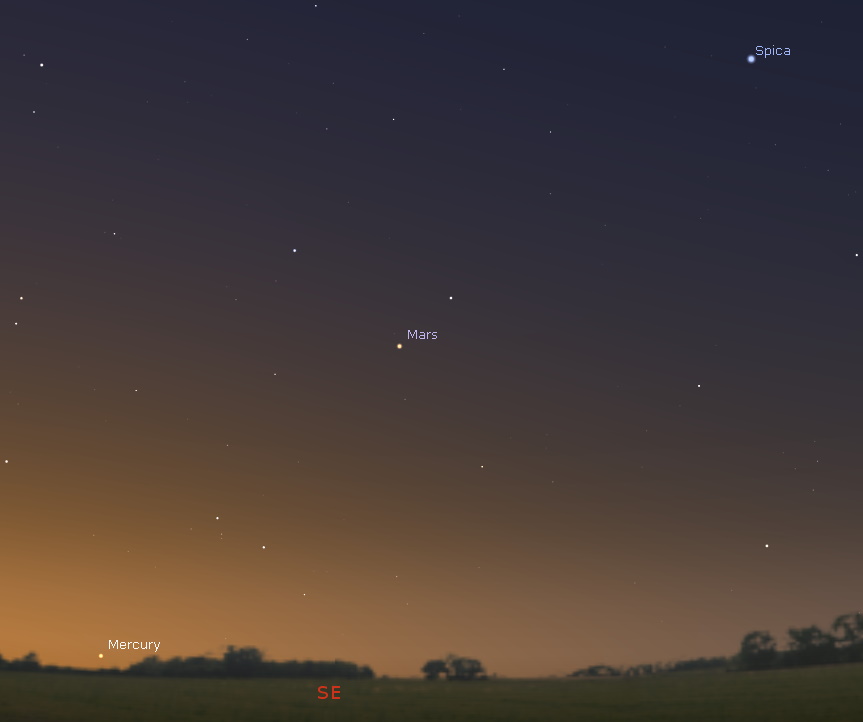 Saturn and Venus move away from each other each evening in the southwestern sky after sunset this week – by early next week, Saturn will be very low on the horizon.

Mercury, Mars and the star Spica continue to align above the southeastern horizon before sunrise this week – Mercury is very low, and may be challenging to observe.

The waning gibbous Moon appears in the eastern sky around midnight on Dec. 18th, the star Regulus nearby. 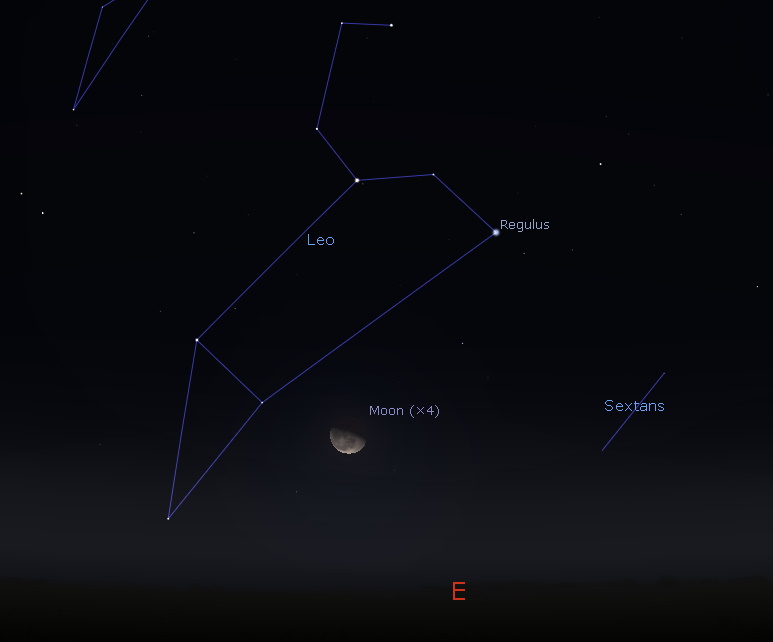 A waning crescent Moon appears near the star Spica in the eastern sky around 4:00 AM on Dec. 21st. 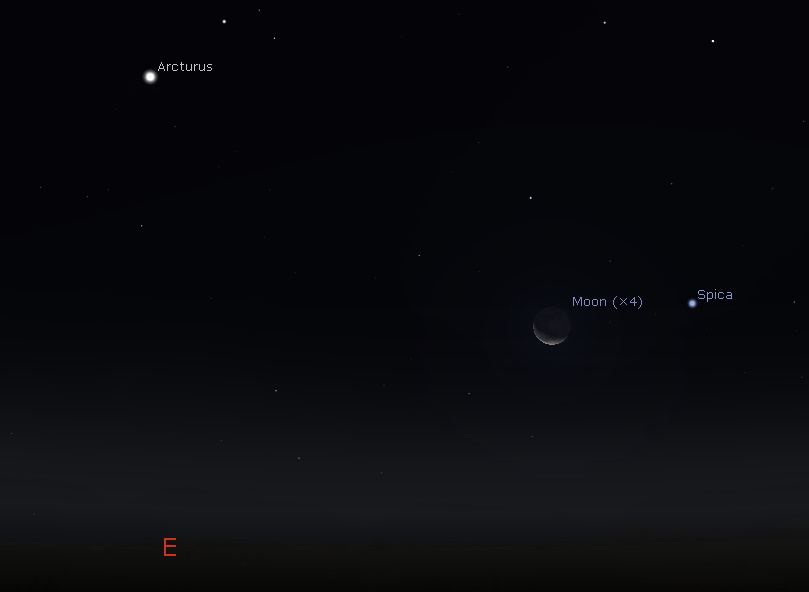 Waning crescent Moon in the eastern sky near the star Spica at 4:00 AM on Dec. 21st. Credit: Stellarium / Bob Trembley.

More often than I thought, asteroids and transneptunian objects pass in front of stars, causing them to monetarily wink-out. This observing challenge is a rather more advanced than most, as it is best done with an 8 inch+ telescope, and if you intend on reporting your timings (kinda the point) you’ll need video recording equipment with time-insertion hardware, and the ability to create AVI video files.

If enough observations are made from different locations, the data can be merged, revealing an outline of the object – this is how it was discovered that transneptunian object 2014 MU69 was a bilobed object; the binary nature of asteroid 90 Antiope can easily be seen in a profile image.

There will be an occultation of a star by a main-belt asteroid on Dec. 20th at 5:14 UTC – the shadow will pass directly over lower Michigan!

The third quarter Moon occurs on Dec. 19th, rising around midnight, and visible to the south after sunrise.

After Dec. 19th, the Moon will be a waning crescent, visible low to the east before sunrise.

The Sun has been spotless for 34 days – the longest stretch for quite some time. Large coronal holes appear at both poles, and a couple smaller holes appear near the center for the Sun’s face.

Light prominence activity, but still good enough to point your solar telescope at.

Our Solar Dynamics Observatory has spotted a new kind of explosion on the Sun ☀️?

A large loop of material, called a prominence, started falling back to the Sun's surface — but it ran into a snarl of magnetic field lines, sparking a magnetic explosion: https://t.co/s3ke3lejVl pic.twitter.com/g2XwyKMudi

Scores of bright, fast Geminids could be seen over the UK last night, including this one seen through clouds from London. pic.twitter.com/lKPq1wMfv5

These two images, taken by Hubble, capture comet 2I/Borisov streaking though our solar system and on its way back to interstellar space. This mysterious visitor from the depths of space is the first identified comet to arrive here from another star: https://t.co/PwF4ykArGa pic.twitter.com/GMi6mvJa1T 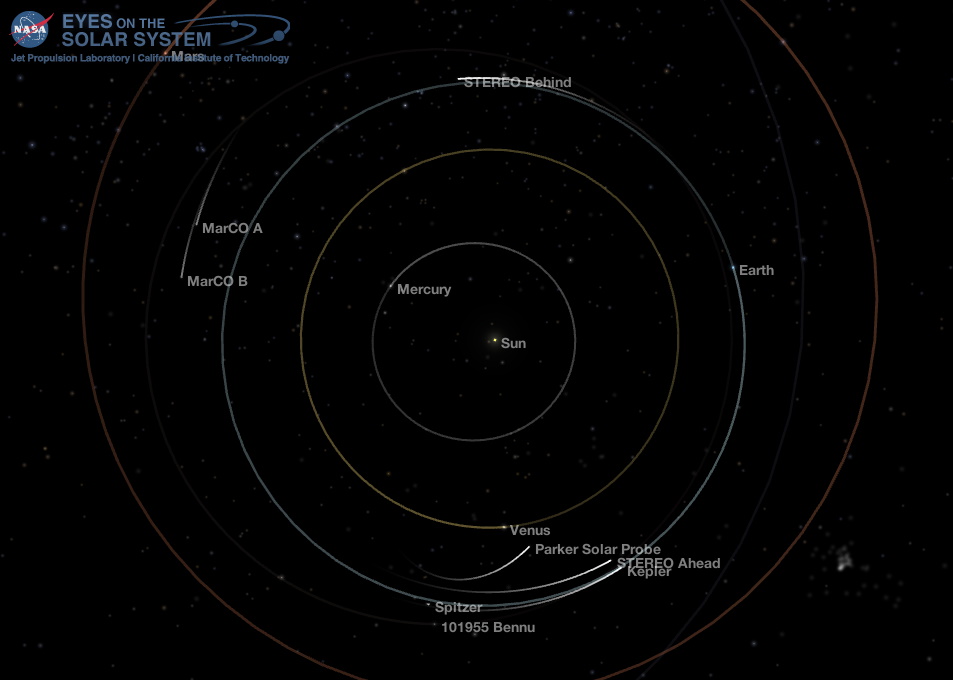 Position of the planets and some spacecraft in the inner solar system, Dec. 17, 2019. Credit: NASA Eyes on the Solar System / Bob Trembley.

Position of the planets and a couple bodies in the middle solar system – the asteroid named after my wife is highlighted in red: 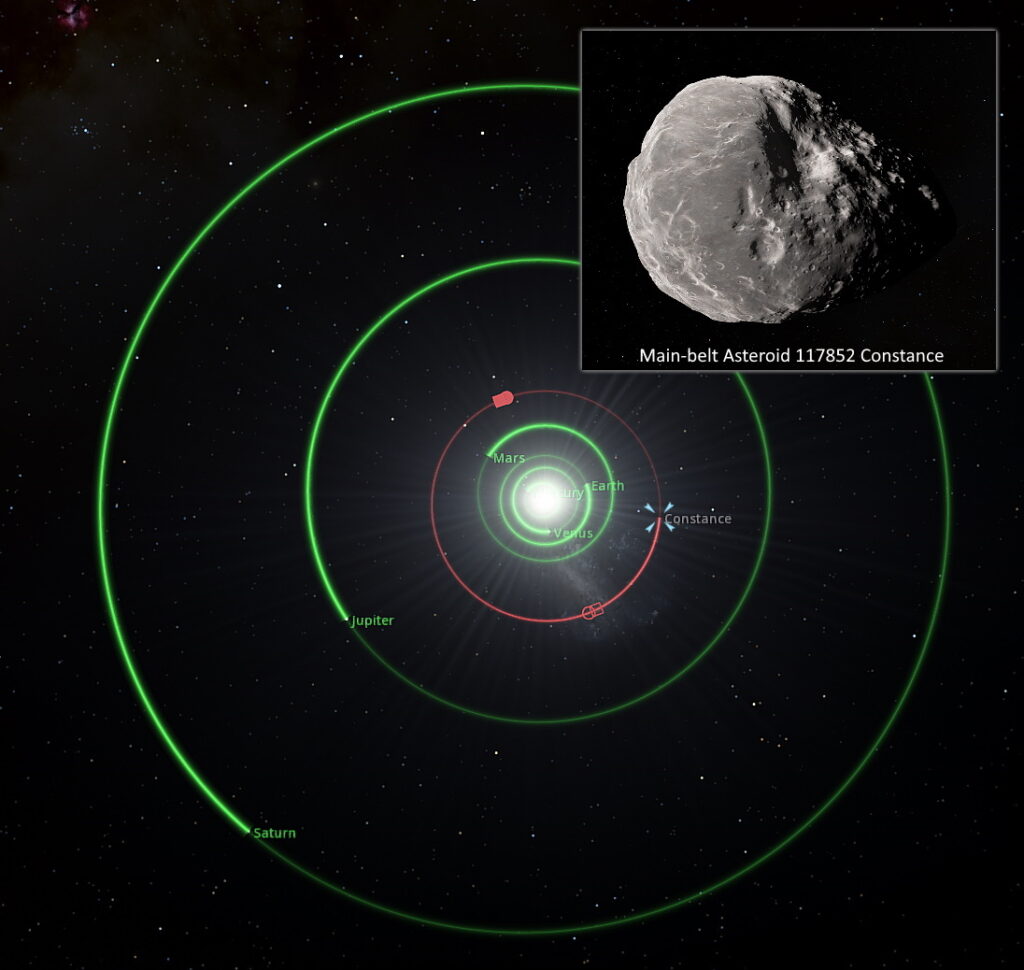 Position of the planets in the middle solar system, Dec. 17, 2019 – the orbit of main-belt asteroid 117852 Constance is highlighted. Credit: SpaceEngine / Bob Trembley.

Position of the planets in the outer solar system, transneptunian object (TNO) and possible dwarf planet (225088) 2007 OR10 is highlighted in red: 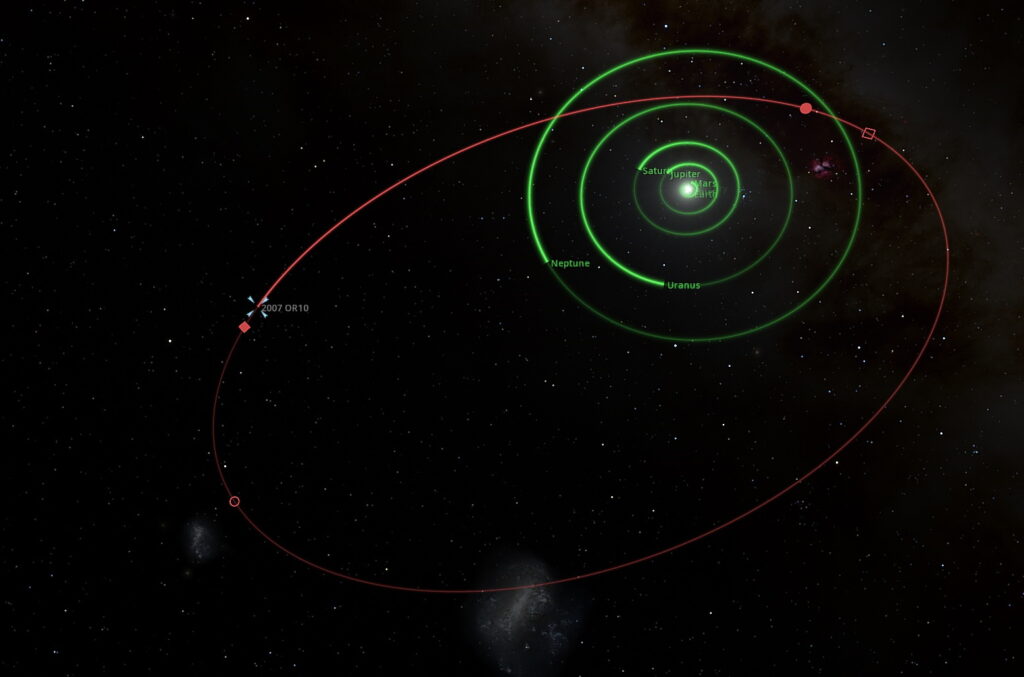 (225088) 2007 OR10, proposed to be named Gonggong, is a likely dwarf planet orbiting the Sun beyond Neptune. It is a member of the scattered disc, a high-eccentricity population of trans-Neptunian objects. 2007 OR10 is in a 3:10 orbital resonance with Neptune, in which it completes three orbits around the Sun for every ten orbits completed by Neptune. As of 2019, its distance from the Sun is 88 astronomical units (1.32×1010 km; 8.2×109 mi), and is the sixth-farthest known Solar System object. It was discovered in July 2007 by American astronomers Megan Schwamb, Michael Brown, and David Rabinowitz at the Palomar Observatory. The discovery was announced in January 2009.

At 1,230 km (760 mi) in diameter, 2007 OR10 is approximately the size of Pluto’s moon Charon and is the fifth-largest known trans-Neptunian object in the Solar System. It is sufficiently massive to be gravitationally rounded, thereby qualifying for dwarf planet status. Its large mass also makes retention of a tenuous atmosphere of methane just possible, though such an atmosphere would slowly escape into space. 2007 OR10 is currently the largest known body in the Solar System without an official name, but in 2019, the discoverers hosted an online poll for the general public to help choose a name for the object, and the name Gonggong won. The winning name is derived from Gonggong, a Chinese water god responsible for chaos, floods and the tilt of the Earth.

2007 OR10 is red in color, due to the presence of organic compounds called tholins on its surface. Water ice is also present on its surface, which hints at a brief period of cryovolcanic activity in the distant past. 2007 OR10 rotates slowly compared to other trans-Neptunian objects, which typically have rotation periods around 12 hours. It has one known natural satellite, provisionally designated S/2010 (225088) 1, which may be responsible for its slow rotation. – Wikipedia 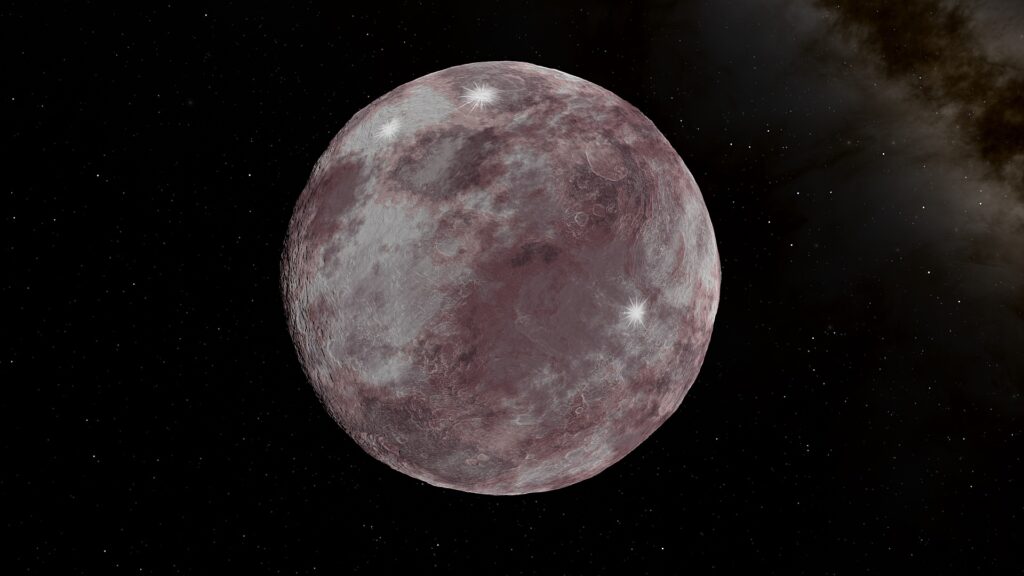 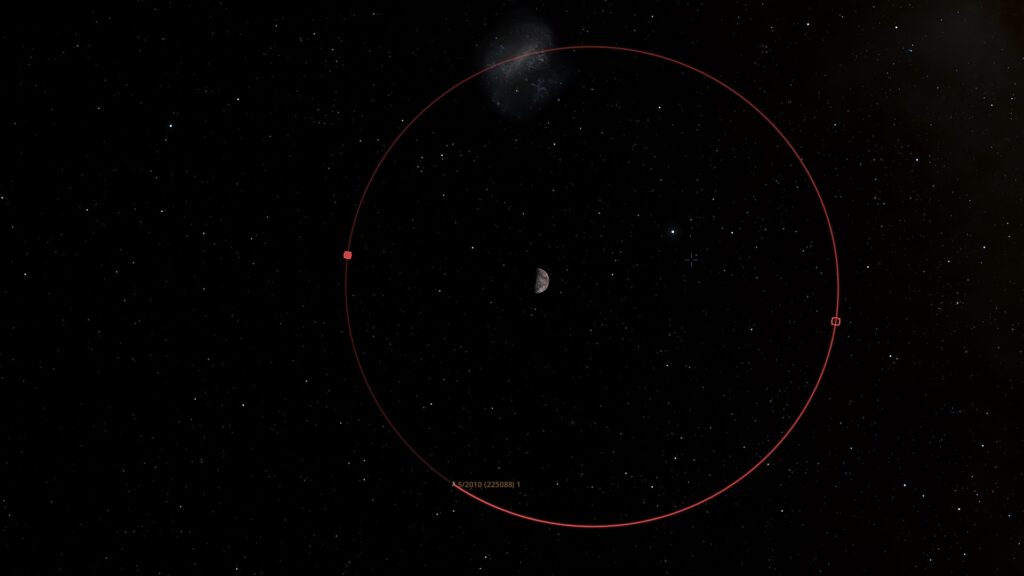 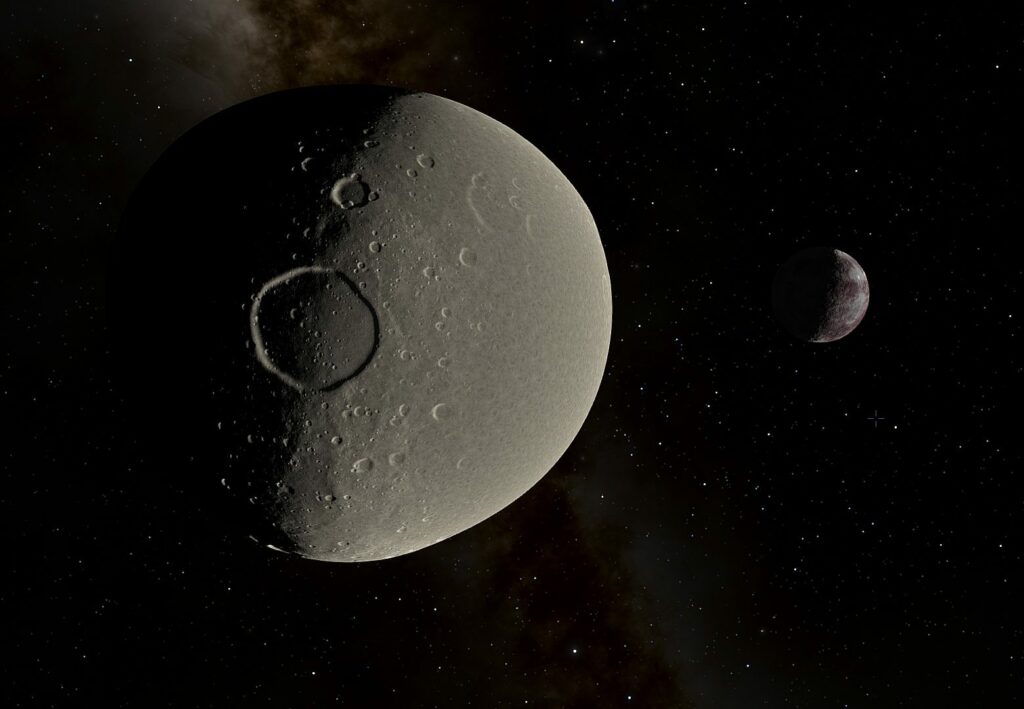 A new time-lapse movie reveals five of Saturn’s inner moons circling the gas giant. The closer moons orbit faster than those farther away, according to the laws of orbital motion. The video is composed of 33 Hubble snapshots taken over an 18-hour period: https://t.co/dLPXkCM3wI pic.twitter.com/rf8qnvIAEt

There’s definitely work to do before touching down on Nightingale’s surface… pic.twitter.com/weJAVs8wCS

The first 3D printer made the trip to the @Space_Station in 2014.

Since then, we have learned a lot about how 3D printing works in microgravity, and how we might be able to recycle 3D printed parts.

Digging a little deeper –
The mole has moved further down. With help from @NASAJPL and @DLR_en, my latest efforts to help the heat probe seem to be working. More digging to come. pic.twitter.com/JumZaqAecY

This discovery would not have happened without the creativity and sharp thinking of my navigators and engineers, who steered me clear of a potentially mission-ending trip through Jupiter's shadow. Learn how: https://t.co/0q7Fuev92s pic.twitter.com/gVTM7tAsWB

The monthly GISTEMP surface temperature analysis update has been posted. The global mean temperature anomaly for November 2019 was 1.02°C above the 1951-1980 November average. https://t.co/EDTZWL4pYk pic.twitter.com/DM8EvalJWq