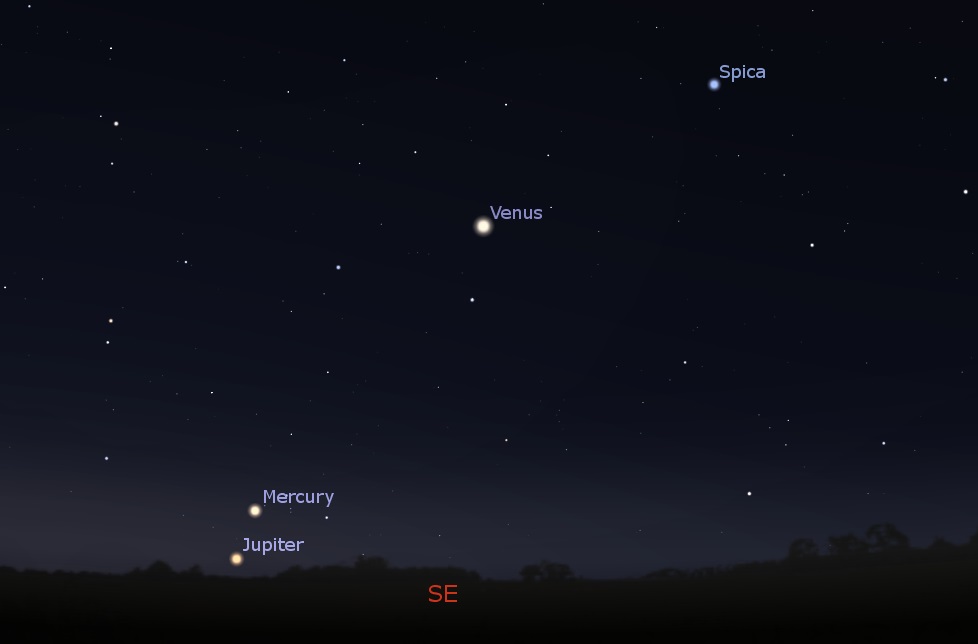 Venus shines so brightly in the southeastern predawn sky, you can practically read by it! Jupiter makes its reappearance this week, joining Mercury, Venus and the star Spica.

Mars is high in southern sky after sunset all week; the waxing gibbous Moon appears to the east of Mars on Dec. 18th. 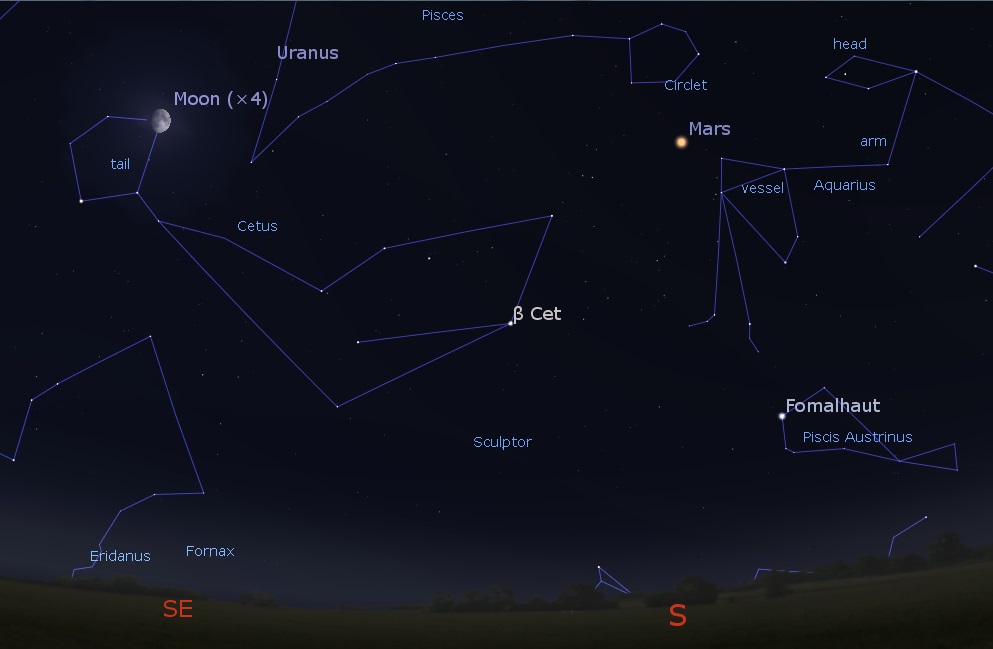 The Moon and Mars high in the south-southeastern sky after sunset – Dec. 18, 2018. Credit: Stellarium / Bob Trembley.

The star Altair is now the “evening star” to the west at dusk; Saturn has almost vanished into the glare of the Sun. 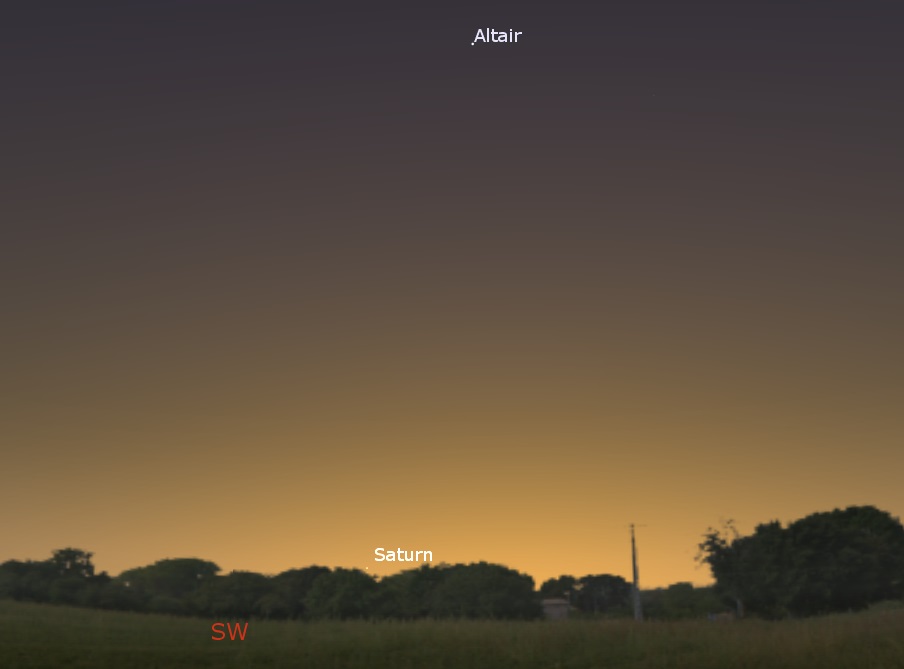 The Moon appears very near the star Aldebaran high in the western sky around 3:30 AM on Dec. 21st. 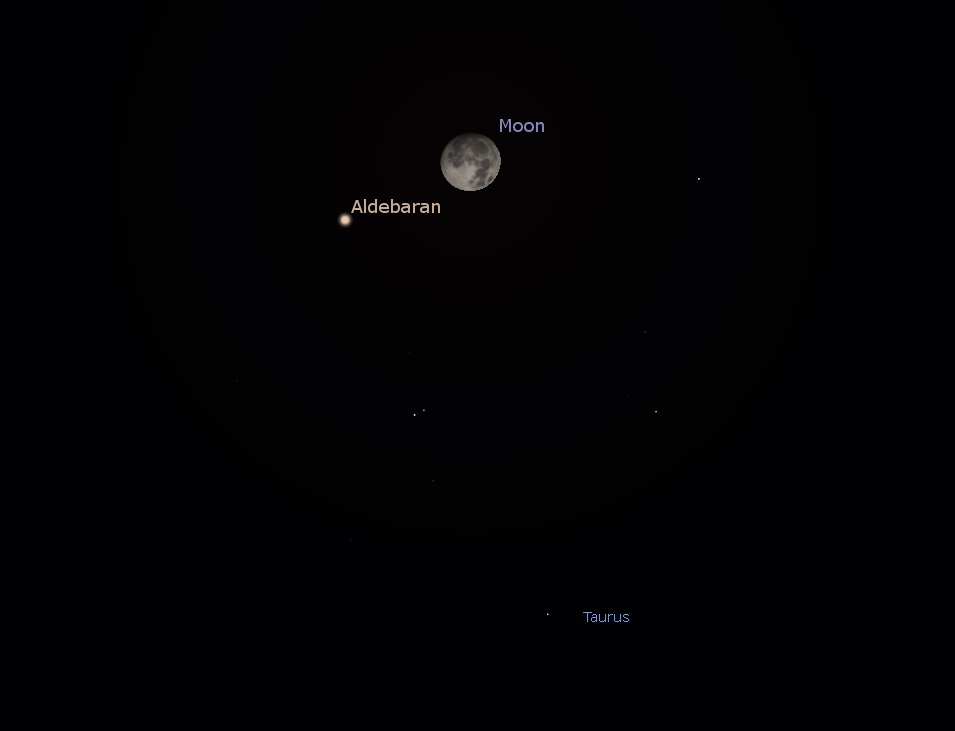 On Christmas Eve, the waning gibbous Moon will appear in the eastern sky after sunset. 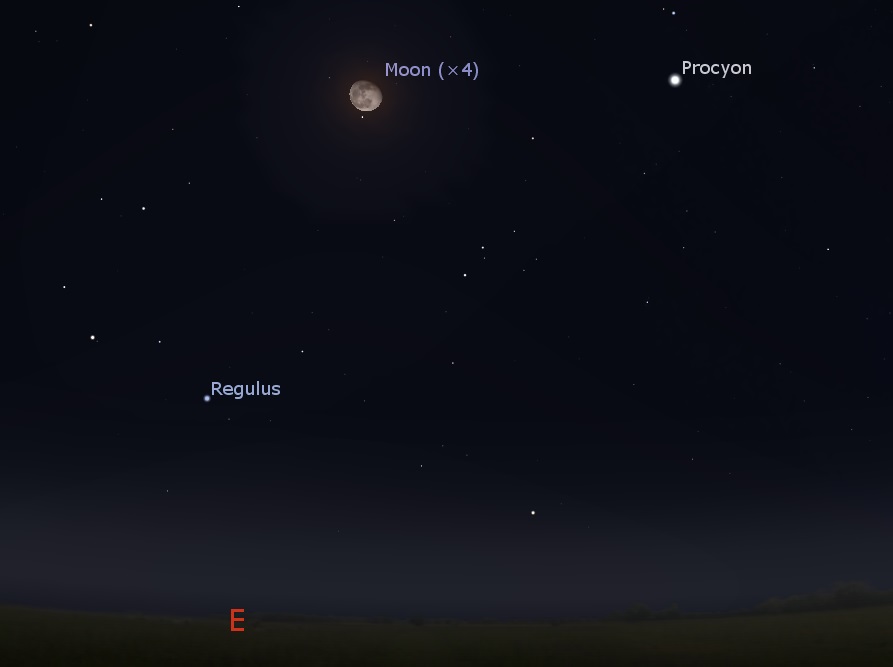 The Moon hight in the eastern sky near midnight on Dec. 24, 2018. Credit: Stellarium / Bob Trembley.

M1, the Crab Nebula, is a supernova remnant located in the constellation of Taurus. The supernova was so bright in 1054 that it could be seen during the day for nearly a month; the supernova was documented by astronomers in several countries. 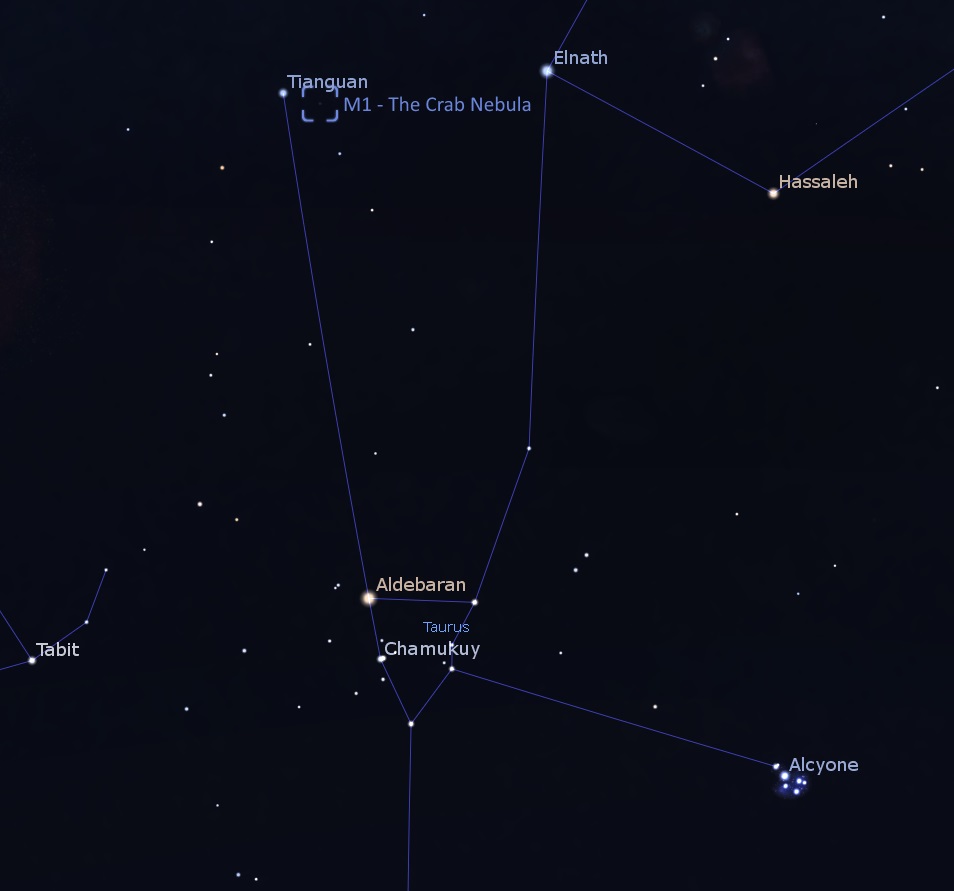 The Moon is a waxing gibbous – visible to the southeast in early evening, up for most of the night. The full Moon occurs on Dec. 22nd – rising at sunset, high in the sky around midnight, and visible all night. After the 22nd, the Moon will be a waning gibbous – rising after sunset, high in the sky after midnight, visible to the southwest after sunrise.

A bright region of coronal loop activity appears near the Sun’s equator, but no sunspot is associated with it; the Sun as been spot-free for 2 days. Large coronal holes continue to remain open at both poles.

SpaceWeather.com says “The solar cycle is at low ebb. Today marks the 208th day in 2018 that the sun has been without spots, doubling the number of spotless days in 2017. The count won’t be able to double again in 2019; there aren’t enough days in the year! However, we can expect a further deepening of Solar Minimum in the year ahead with, literally, hundreds of spotless days to come.”

Several small prominences have appeared on the Sun’s limb over the last couple days – one loop (lower right) and several short-lived pillars, but no “OH WOWs” like happened last week.

In this diagram of the inner solar system, all of the fireball orbits from Dec. 17, 2018 intersect at a single point–Earth. Source: Spaceweather.com

Watch this meteor go behind the roof and then wait for it. A very interesting fireball from Church Crookham pic.twitter.com/Z5hq99tZ5G

Comet 46P/Wirtanen made its closest approach to Earth on Dec. 17th. Social media has been flooded with images.

Geminids, Pleiades, comet 46P/Wirtanen… can it get any better?? The clouds moved away at the @OOCC_IAC to give us an incredible show with hundreds of meteors falling over our heads. These are some of the brightest meteors captured in this field over 2 hours @TheUniverse_TM pic.twitter.com/vECBBJpQj6

This weekend, Wirtanen became one of the closest comets to pass Earth in decades — and #NASAMarshall caught it as it flew by in this 120-second exposure.

A comet called 46P/Wirtanen is giving Earth an unusually good view of its greenish glow this week. If weather allows, it will be visible until Dec. 22.https://t.co/EDdzo3AxH1 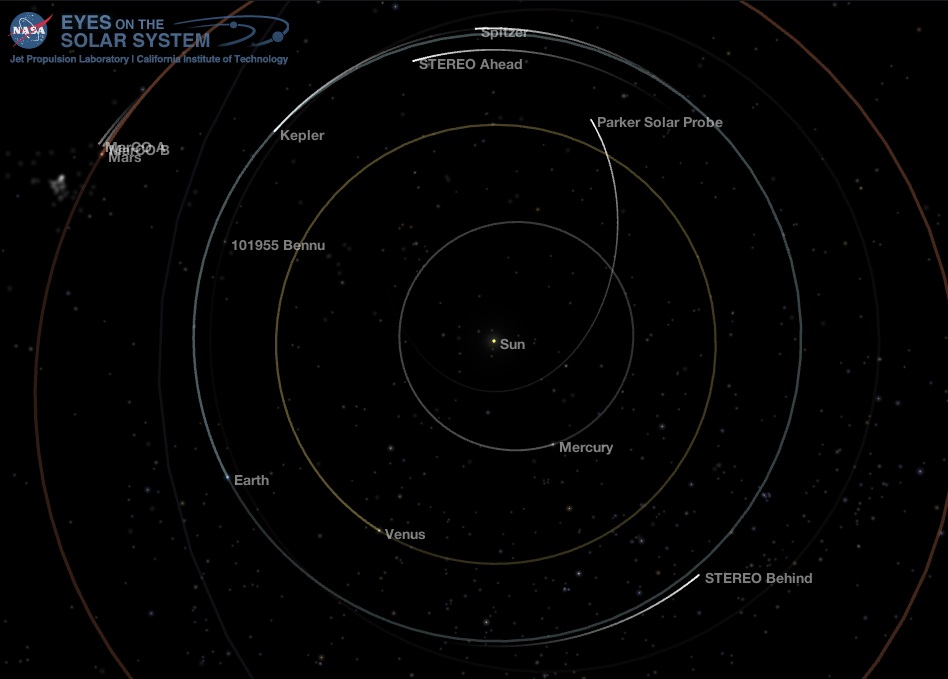 Position of the planets in the inner solar system, Dec. 18, 2018. Credit: NASA Eyes on the Solar System / Bob Trembley. 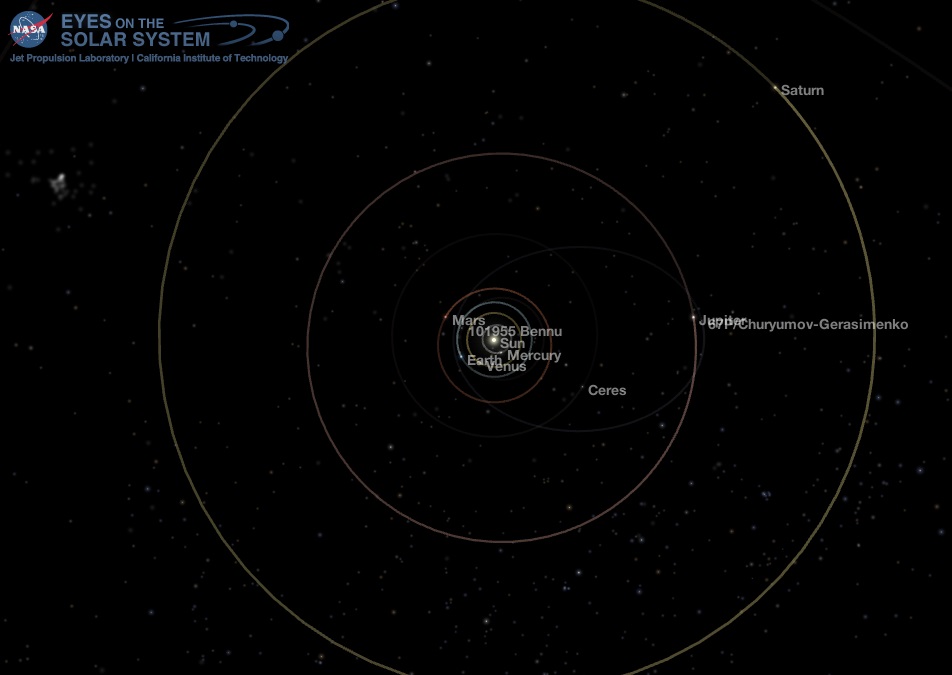 Position of the planets in the middle solar system, Dec. 18, 2018. Credit: NASA Eyes on the Solar System / Bob Trembley. 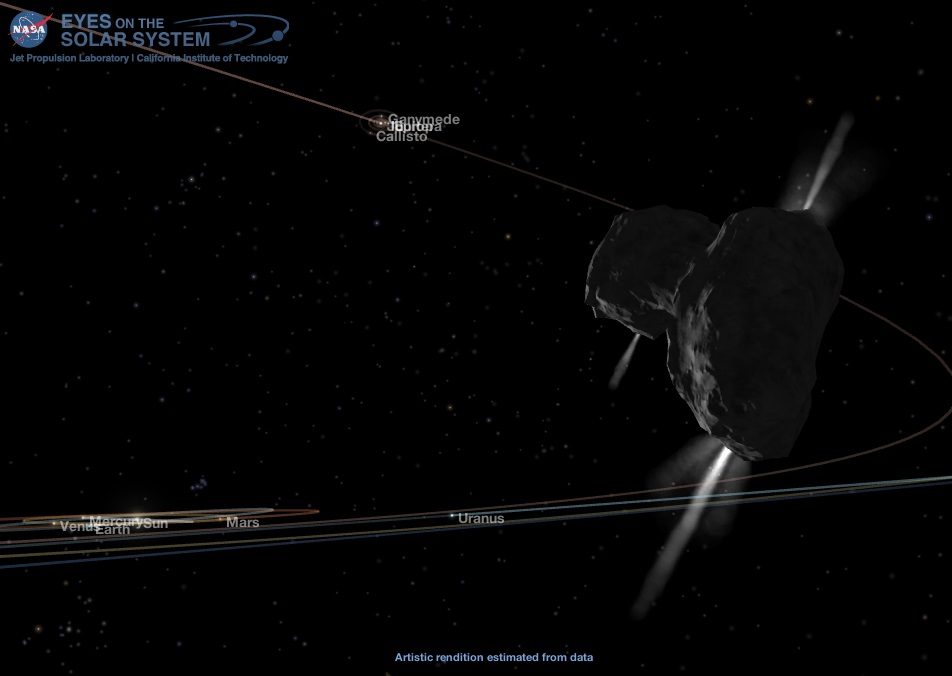 Check out NASA’s Interactive Solar System Orrery at: https://solarsystem.nasa.gov – click on the animated Orrery icon to launch the browser app.

It’s kinda like NASA Eyes on the Solar System LITE, but for the browser; it can be used on computers where you cannot install the full Eyes client app.

Note: The Orrery is a WebGL browser app, and its performance is better on systems with hardware-accelerated graphics.

I've been at Bennu for two weeks now and the adventure is just getting started.
Mostly, I've been perfecting the flip turn – in space, not the swimming pool – and working on my other precision maneuvers.

Here are details on my activities since arrival: https://t.co/Ygc94cgXEz pic.twitter.com/XZ7wKl78rH

Who knew that practicing the claw game would come in handy for exploring #Mars? I’ve got a grip on my seismometer and am preparing to set it down. https://t.co/tjr8tfaCg5 pic.twitter.com/IsOAlXfiUt

Parker Solar Probe – Views the Sun’s Corona Closer than any Spacecraft Before!

It's #SunDay! ☀️ This new view of the Sun's corona — a dynamic part of the solar atmosphere — was captured by #ParkerSolarProbe when it was just 16.9 million miles from the Sun, much closer than any spacecraft has ever gone before. https://t.co/kec0t4mey5 pic.twitter.com/omExgpMyvX 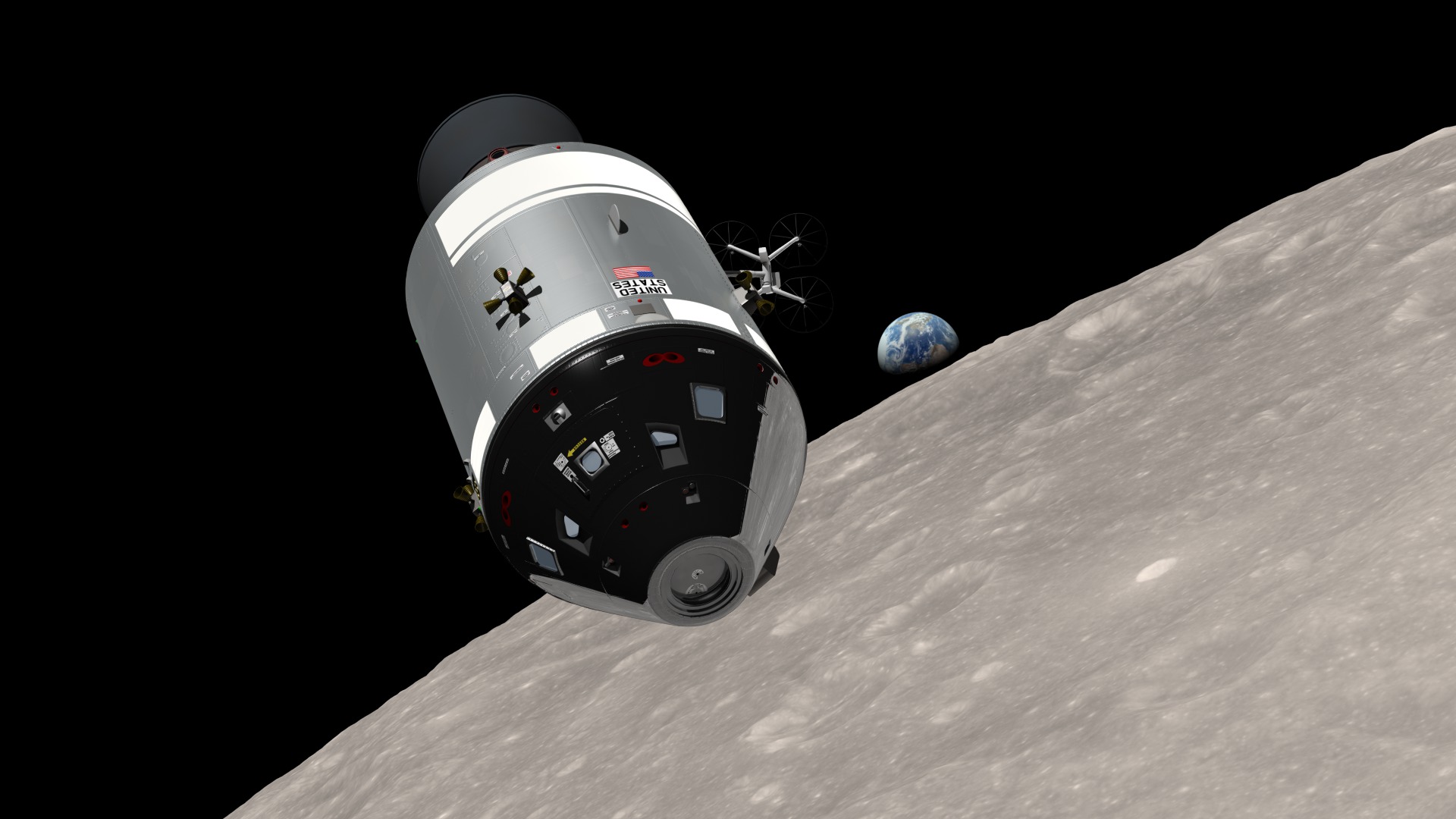 Recreation of the iconic “Earthrise” image taken by Apollo 8’s William Anders, using image data from the Lunar Reconnaissance Orbiter (LRO), with an added model of the Apollo 8 spacecraft. Visualization by Ernie Wright.