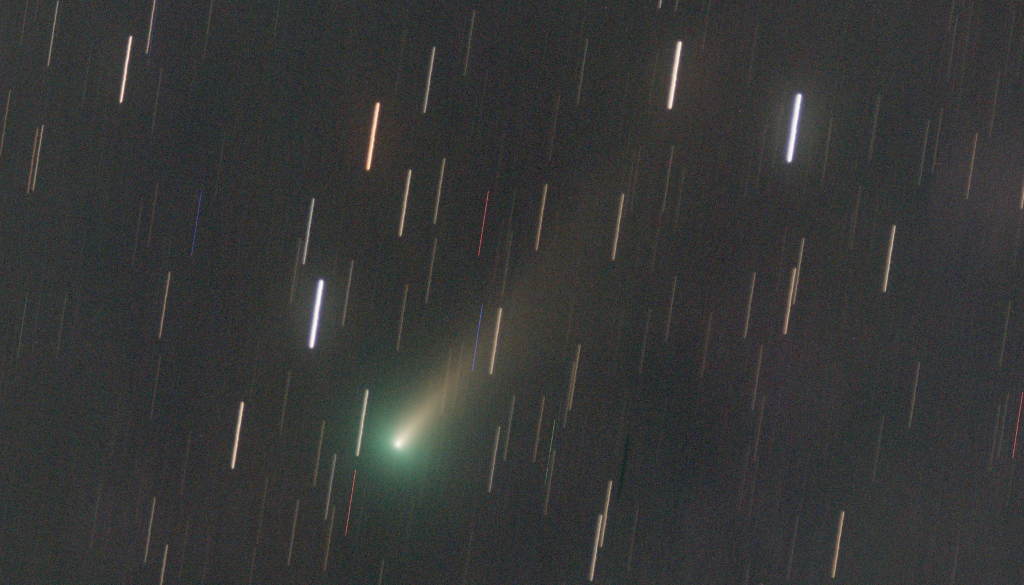 A couple days a every month, during the wee hours of morning, the waning gibbous Moon shines through my kitchen skylight. I gawk up at it as I refill my coffee, and give a passing thought to setting up my telescope in the middle of the kitchen floor… but there’s really not enough space.

I’m going to be playing Santa again this year for my granddaughter, and my wife recently got an absolutely beautiful matching Mrs. Claus costume from our master seamstress friend!

Jupiter, Saturn and Venus appear in the southwestern sky after sunset all week. Today is the one-year anniversary of the very close conjunction of Jupiter and Saturn – they’ve separated a little over 17 degrees in the sky since.

Mars appear low above the southeastern horizon near the star Antares before sunrise all week.

The Moon appears near the star Pollux above the western horizon before sunrise on Dec. 21st.

The Moon appears near the star Regulus above the southwestern horizon before sunrise on Dec. 24th.

The Moon appears near the star Spica above the southern horizon before sunrise on Dec. 27th.

WOW! The Sun is covered in spots! 8 names spots, and a lot of discolored plage regions – Spaceweather.com says this is the largest number of visible spots in more than 4 years!

The Sun seen in 193 angstroms on December 20th

The Sun seen in 304 angstroms on December 20th

A huge prominence blows off the Sun in the first moments of this video; The numerous active regions are very obvious – the ones in the southern hemisphere are crackling with flares!

Singer Johnny Cash gets an asteroid named after him

Singer Sting gets an asteroid named after him

How was the #asteroid belt formed?

Position of the planets & several spacecraft in the inner solar system on December 20th:

Another view of Makemake’s orbit:

Flight 18 of the Mars Helicopter

SpaceX Dragon on its way to the ISS

Have your postcard sent into SPACE!

DAILI CubeSat to study dayglow in the atmosphere

I just LOVE what NASA has been doing with posters in recent years!

Had the opportunity of being a NASA flight controller or mission control engineer presented itself when I was a young man, my life would likely have taken a different course!

This time-exposure of the comet was taken by Doug Bock, an astrophotographer buddy and member of the Warren Astronomical Society.

C/2021 A1 (Leonard) is an inbound long period comet discovered by G. J. Leonard at the Mount Lemmon Observatory on 3 January 2021 (a year before perihelion) when the comet was 5 AU (750 million km) from the Sun. This was the first comet discovered in 2021 and it has a retrograde orbit.

On 12 December 2021 the comet was 0.233 AU (34.9 million km) from Earth and on 18 December 2021 it was 0.028 AU (4.2 million km) from Venus. It will make its closest approach to the Sun on 3 January 2022. On 10 October the comet showed a short but dense dust tail. In early December the comet had an apparent magnitude (coma+nucleus) of around 6. The first reports of naked eye observations by experienced observers started coming in on 5 December 2021. Much like observing Messier 33, the low surface brightness of the comet can make it difficult to observe near urban areas.

As of 20 December 2021, the comet is in an outburst around apparent magnitude 3, making it a naked eye comet for the Southern hemisphere. – Wikipedia