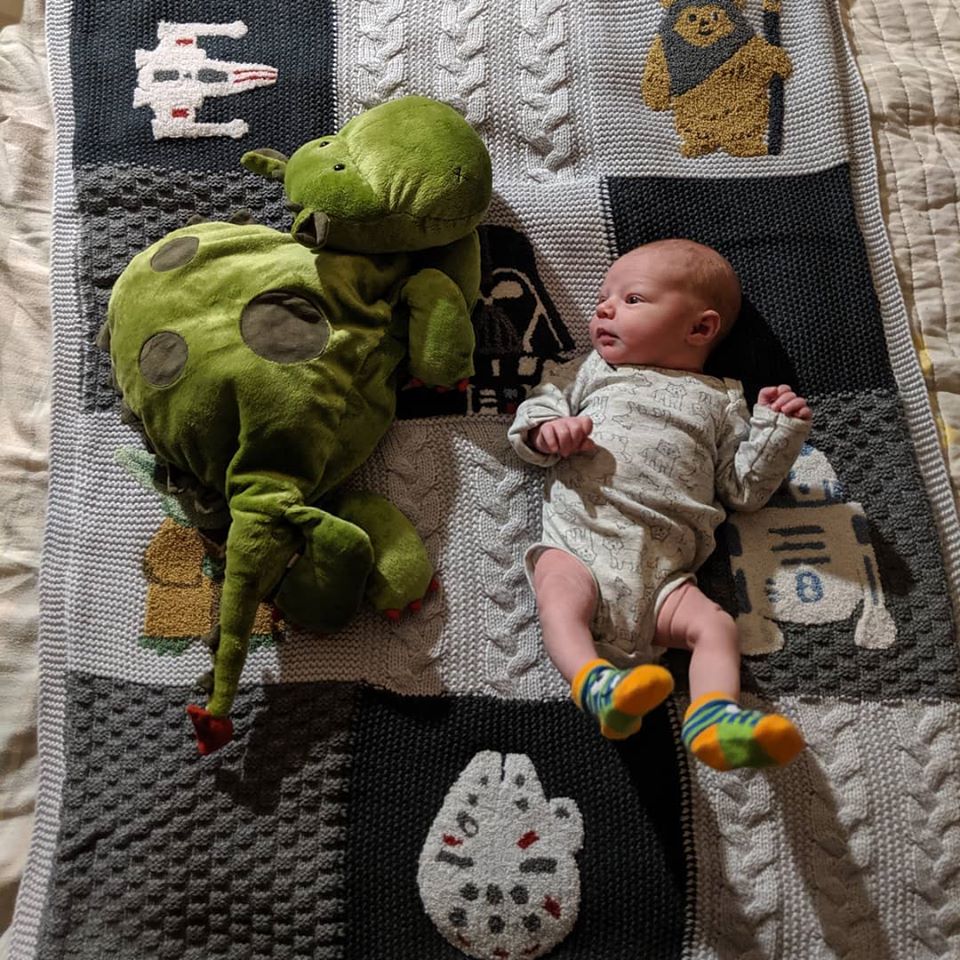 Remember how last week I mentioned that “Things have been a little exciting for me the last couple days?” Adding to the excitement of having a new granddaughter, our house sold the day after it went on the market! The inspector has come and gone, the appraisal takes place tomorrow, and now we’re looking for a new home – whew!

My granddaughter, Alayanora Lee Festian, got to meet her aunt Rachel (my eldest) and her great-grandparents (my wife Connie’s parents) last weekend – great grandma and grandpa were in heaven! Rachel left her niece a Star Wars blanket – which is awesome, but I would have expected something Harry Potter-themed from Rachel…

The planets splashed across the southeastern horizon before dawn are joined by the Moon for the next several mornings – the Moon will appear near Mars on Feb. 18th, Jupiter on Feb. 19th, and Saturn on Feb. 20th.

The Moon actually occulted the planet Mars at dawn on Feb. 18th – it was cloudy where I was… 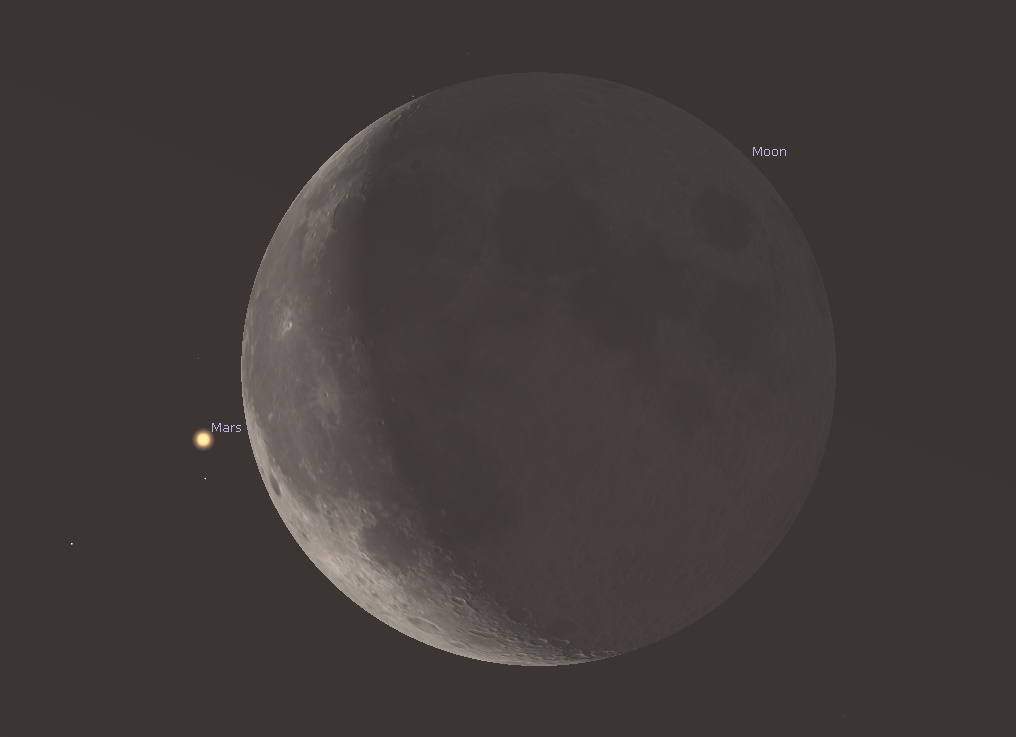 There will be an occultation of Mars by the Moon shortly after 7:00 AM on Feb. 18, 2020 – but (as luck would have it) the event may be lost in the glare of the Sun. Credit: Stellarium / Bob Trembley.

This astrophysicist and astrophotographer tweeted a video of the Mars occultation:

Moon about to eclipse Mars! https://t.co/bjxULjJ2FE

Venus is high and BRIGHT in the west-southwestern sky a dusk; I’ve been seeing a lot of “what is that?” posts on social media. Mercury appears very low on the western horizon at dusk, and will leave the evening sky by the end of the week. 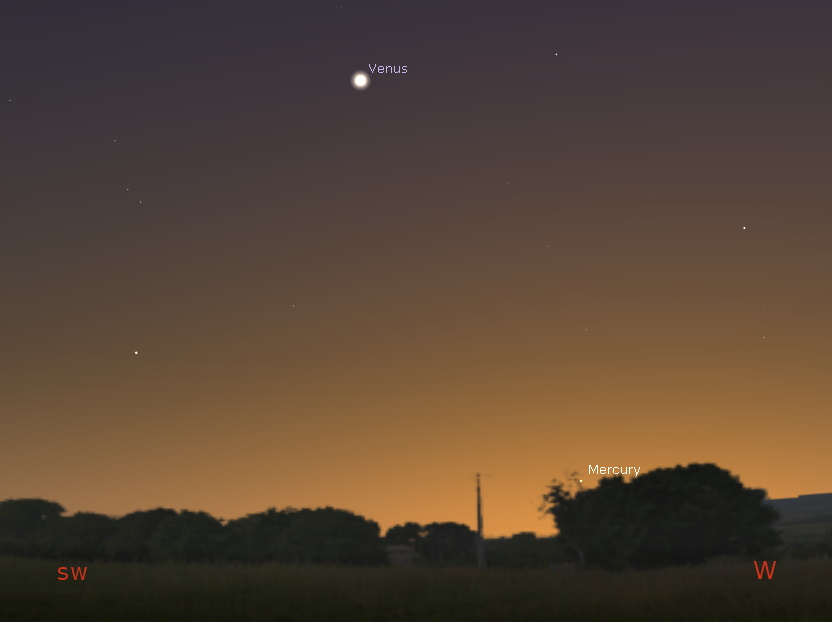 Venus high and bright in the western sky at dusk this week – Mercury is very low and will be gone by week’s end . Credit: Stellarium / Bob Trembley.

The Moon is a waning crescent, visible low to the east before sunrise. Be sure to watch for earthshine!

After Feb. 23rd, the Moon will be a waxing crescent, visible toward the southwest in early evening.

The Moon from 2020-02-18 – 2020-02-24. Visualizations by Ernie Wright / NASA’s Scientific Visualization Studio.
Click this image to go to the NASA 2020 Moon Phase and Libration site. Click the image of the Moon on that site to download a high-rez image of the current Moon phase with the names of craters and other features shown – many along the terminator.

When you land, can you stand? ?

NASA’s Human Research Program studies how balance is affected after long-duration spaceflight. This research will help astronauts on long-duration missions to the Moon with #Artemis, and eventually, to Mars. Hear more: https://t.co/UjCdJb8nBH pic.twitter.com/B1FS4kPRcg

Not sure how I missed this one:

Using @NASA_NCCS computing resources and data from @LRO_NASA, @NASAGISS, @Columbia, @CUBoulder, and @NASA_Langley scientists simulated an ancient lunar atmosphere that could have brought substantial amounts of water to the Moon’s poles: https://t.co/umrtqo2lbf pic.twitter.com/MdZYwrFenu

Some nice but short-lived prominences on the Sun’s limb over the last several days – enough for some good photos tho!

The first #SolarOrbiter Magnetometer measurements of the interplanetary magnetic field, taken after the instrument boom deployment, more than one million km away from Earth, look good ? #weareallsolarorbiters https://t.co/BZkIeXye9x

I’ve seen reports ALL OVER Twitter about a “meteorite striking a factory in India;” the only video I’ve seen is one from a security cam showing a bolide in the air. I have NOT seen any pictures of the unfortunately located factory, or the alleged “twenty foot crater” left by this this impact. I’ll wait to post anything about this until I see something more convincing. 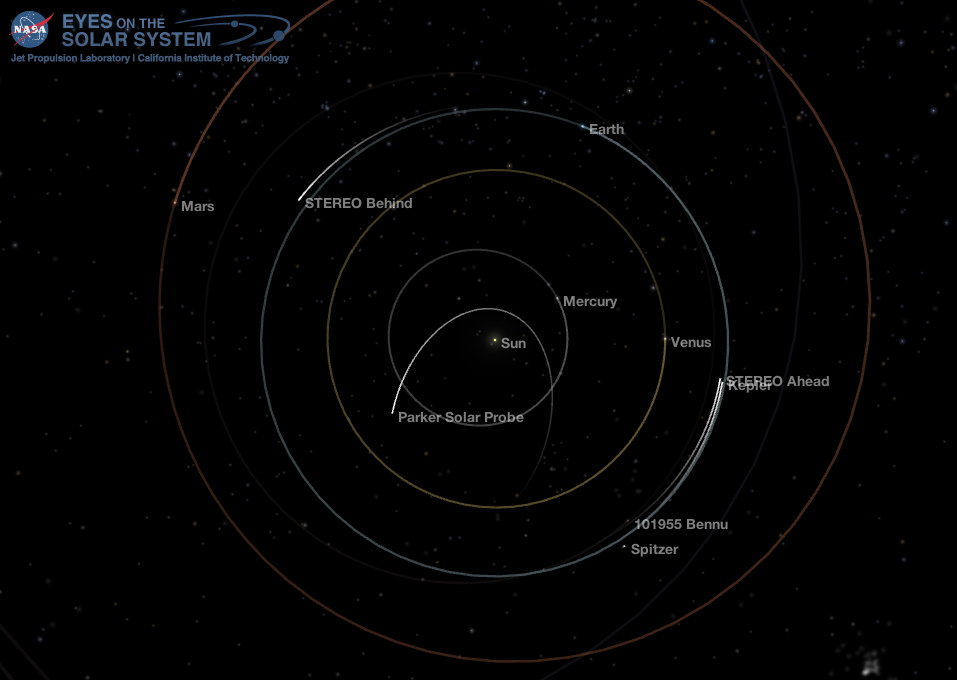 Position of the planets and a couple spacecraft in the inner solar system, 2020-02-18. Credit: NASA Eyes on the Solar System / Bob Trembley. 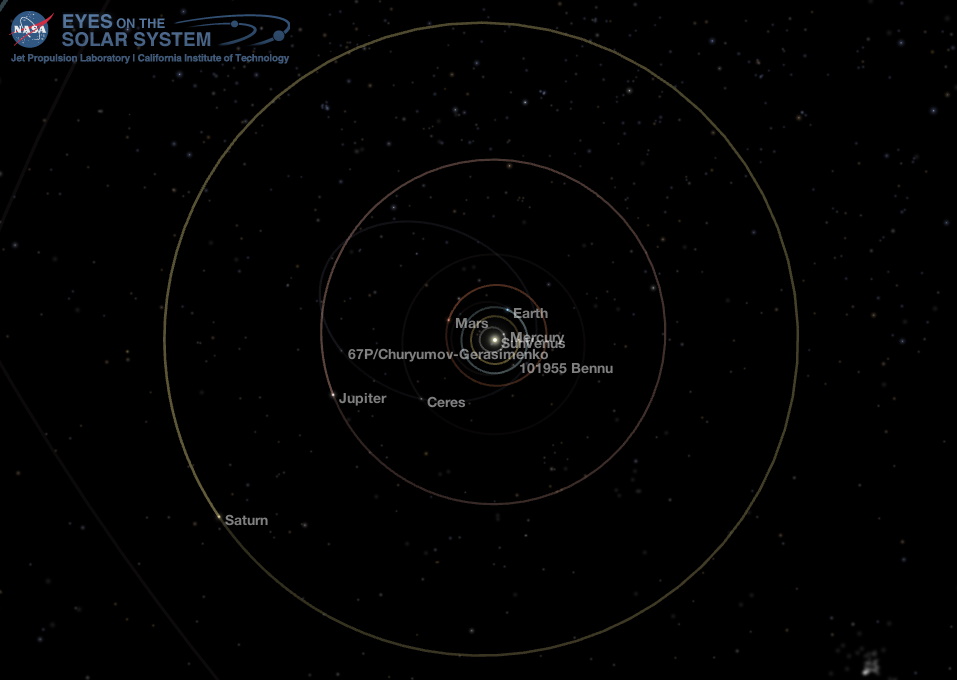 Position of the planets in the middle solar system, 2020-02-18. Credit: NASA Eyes on the Solar System / Bob Trembley. 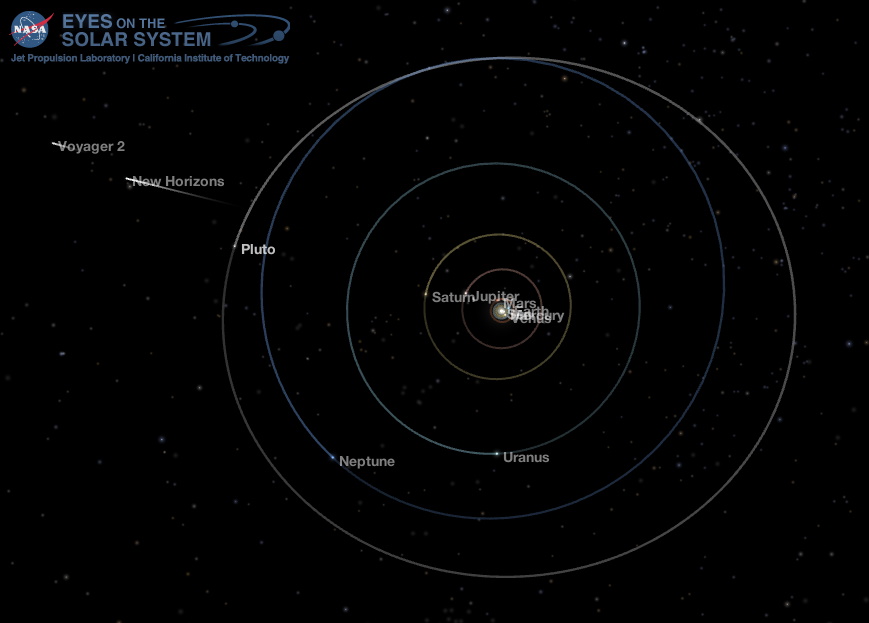 Position of the planets in the outer solar system, 2020-02-18 – the New Horizons spacecraft is about 1.25 billion miles from Pluto. Credit: NASA Eyes on the Solar System / Bob Trembley.

I chose to highlight Neptune’s moon Triton this week: 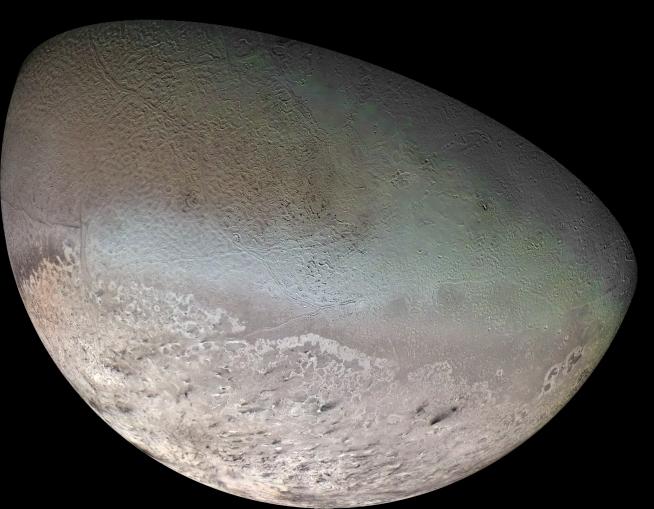 Global color mosaic of Triton, taken in 1989 by Voyager 2 during its flyby of the Neptune system. Credit: NASA/JPL/USGS

Triton is the largest of Neptune’s 13 moons. It is unusual because it is the only large moon in our solar system that orbits in the opposite direction of its planet’s rotation―a retrograde orbit. – NASA 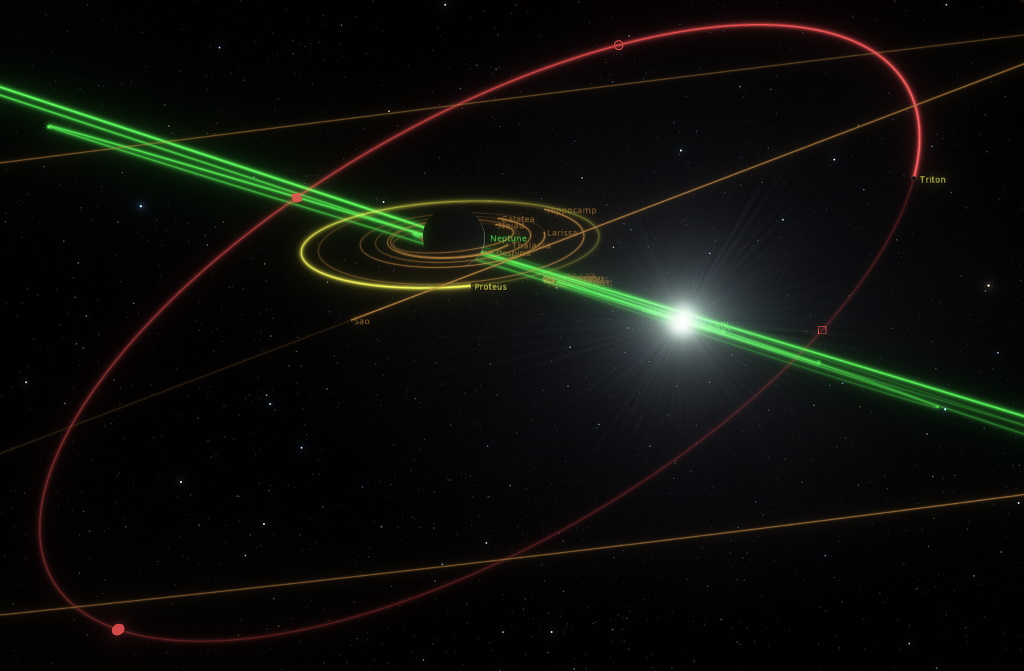 Scientists think Triton is a Kuiper Belt Object captured by Neptune’s gravity millions of years ago. It shares many similarities with Pluto, the best known world of the Kuiper Belt. – NASA 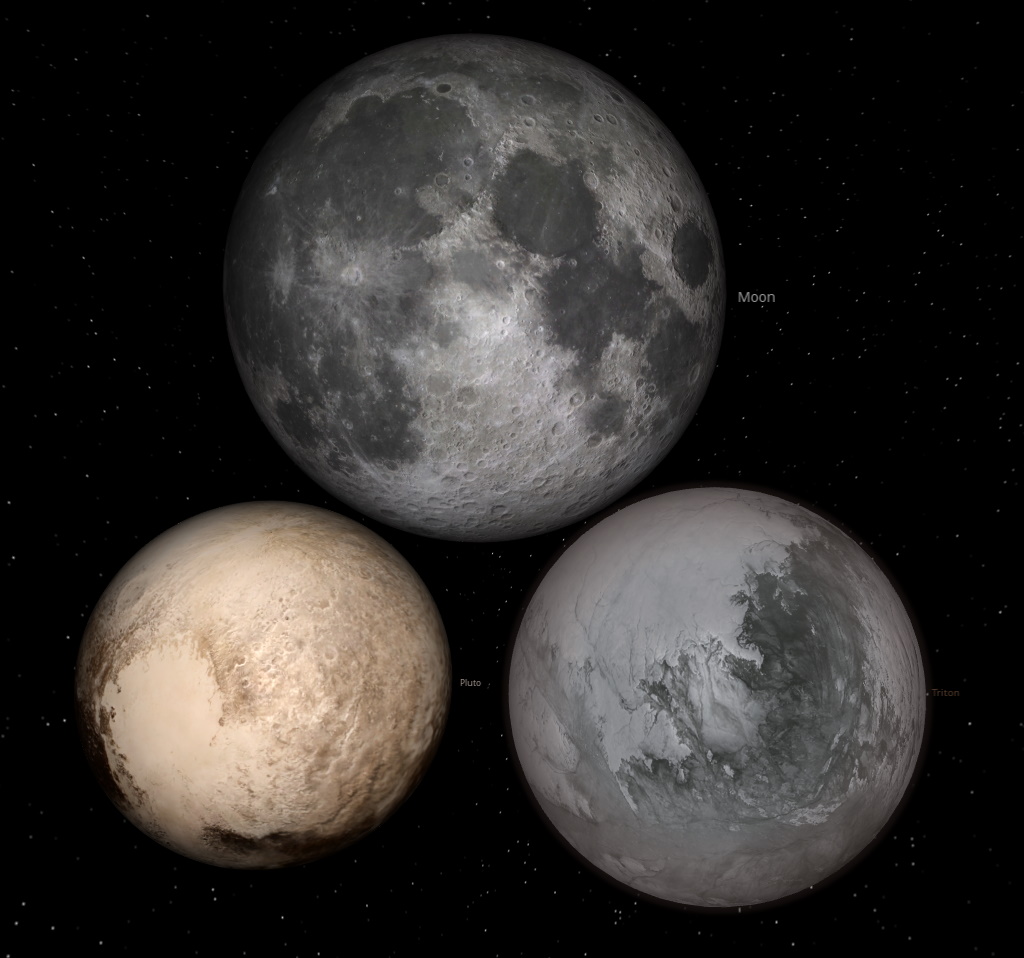 Note: In the image above, the Moon and Pluto are represented accurately in Universe Sandbox – Triton is not. I used a randomly generated cold moon, with colors picked from a Voyager image of Triton. I was mainly going for a size comparison here anyway…

Like our own moon, Triton is locked in synchronous rotation with Neptune―one side faces the pla