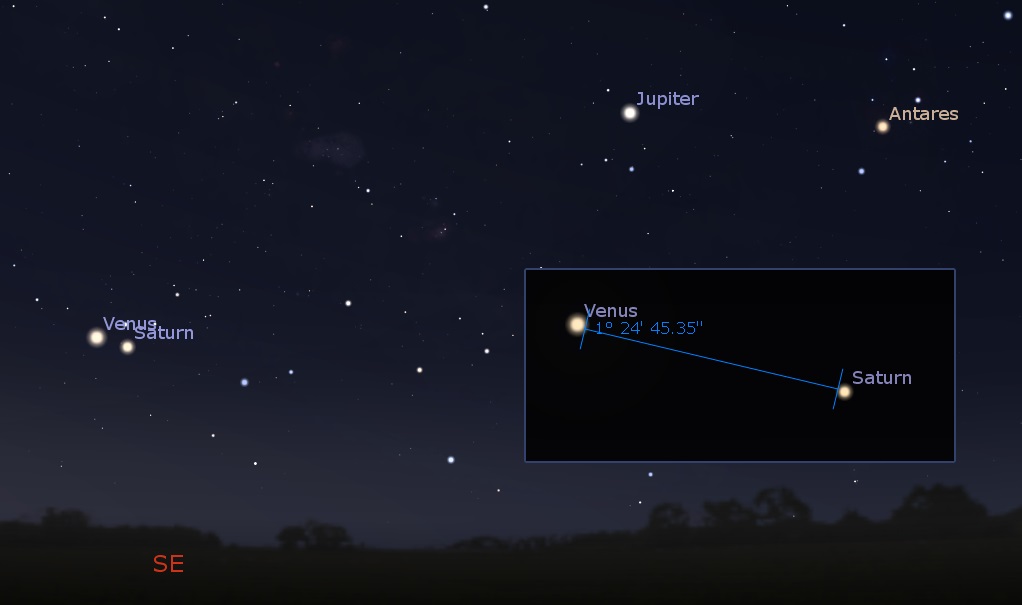 After a heavy snow, the full Moon put on a stunning show this frigid morning; I was able to see Jupiter out my kitchen window, but Venus and Saturn were obscured by low clouds. As I was shoveling, I thought about how my house blocks the sunlight – which never melts snow off my driveway – while the neighbors across the street have nice clear driveways, baked by the Sun… As tends to happen with me, thoughts wander to something astronomical – this time: permanently shadowed regions on the Moon and Mercury.

Last Saturday, my wife and I got to see a fantastic presentation by astronaut Terry Virts about his time on the International Space Station! We got a signed copy of his book: “View from Above.”

My wife Connie (@Sciteacher84) and I saw Astronaut Terry Virts (@AstroTerry) speak at @MacombCollege about his time on the @Space_Station! pic.twitter.com/oOSRBjY5Pl

Several planets are in the southeastern predawn sky all week; Venus and Saturn are very close to each other on the morning of Feb. 19th.

Venus and Saturn spread apart all week – the change should be noticeable each morning!

Conjunction of Venus and Saturn in the southeastern predawn sky over the week of Feb. 19-27, 2019. Credit: Stellarium / Bob Trembley.

Mars and Uranus are in the west-southwestern sky before midnight. 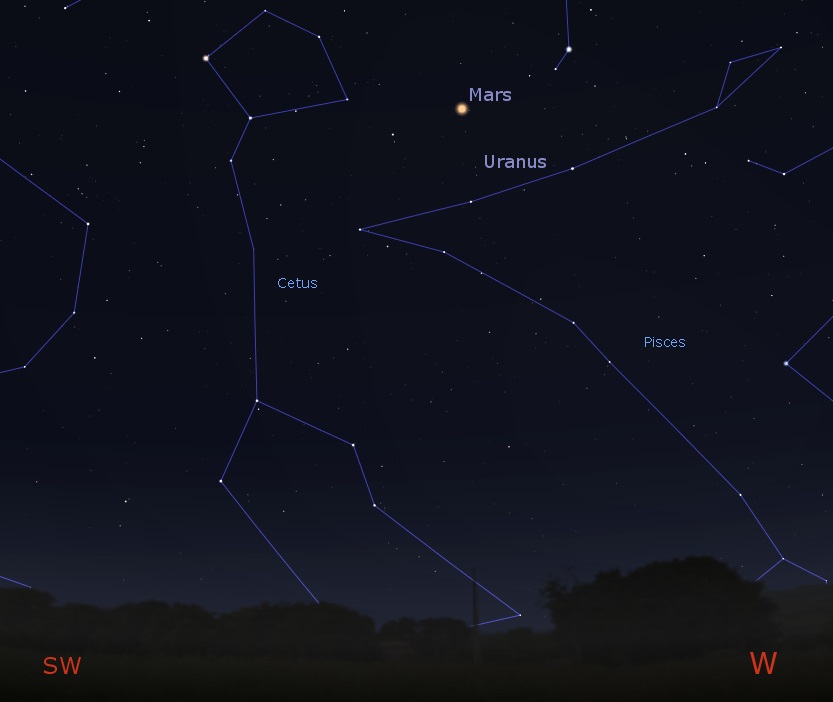 Mars and Uranus are in the west-southwestern sky before midnight on Feb. 19th. Credit: Stellarium / Bob Trembley.

The image from the tweet below is from last week when Mars and Uranus were very close to each other in the sky.

Mars close to Uranus in the evening sky tonight – photographed from Kendal, Cumbria, with DSLR on tripod, no tracking or stacking – pic 1 of 2 pic.twitter.com/UUBrPeExet

On the evening of Feb. 19th, the Moon will be in the constellation Leo, near the star Regulus. 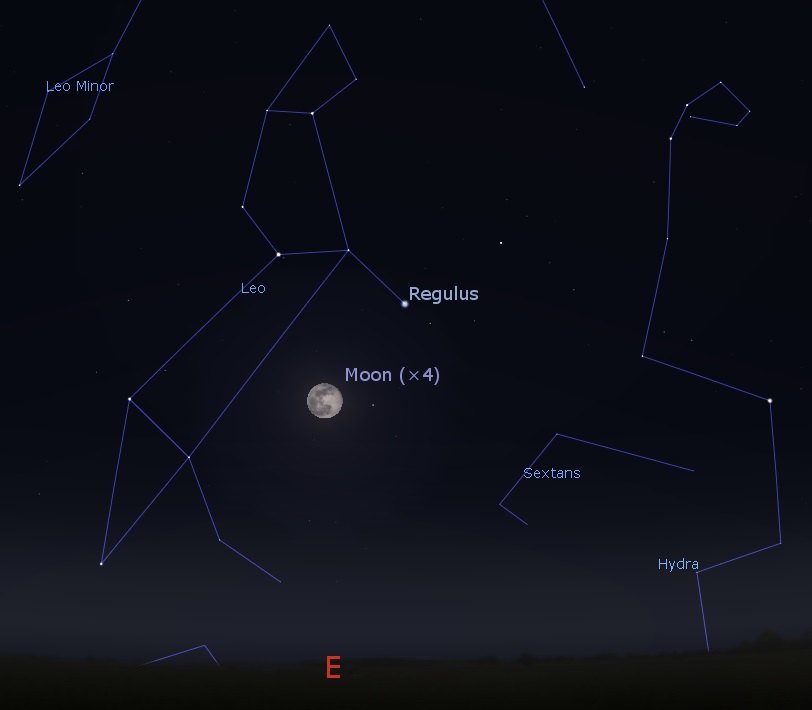 The Moon in the eastern sky in the constellation Leo near the star Regulus before midnight on Feb. 19, 2019. Credit: Stellarium / Bob Trembley.

In the southern hemisphere, seen from Beaufort West, South Africa, this same patch of sky is visible to the northeast, and flipped: 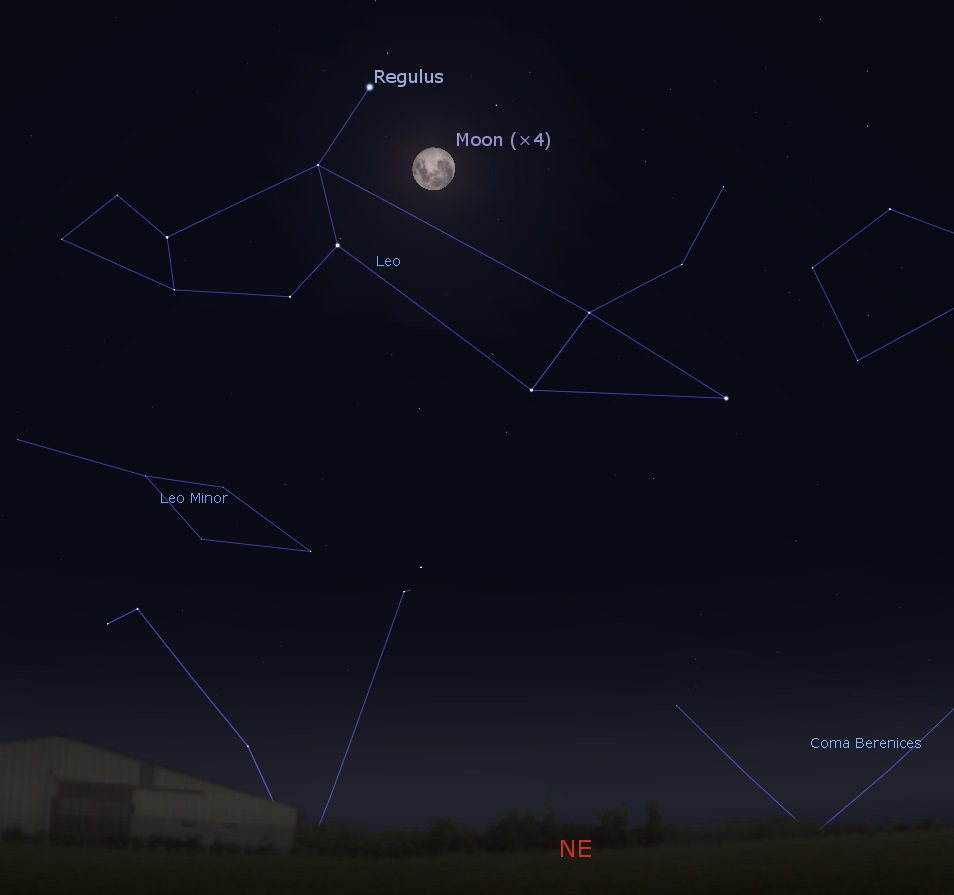 The Moon in the northeastern sky in the constellation Leo newr the star Regulus before midnight on Feb. 19, 2019- seen from Beaufort West, South Africa. Credit: Stellarium / Bob Trembley.

The waning gibbous Moon will be visible low in the southeastern sky after midnight on Feb. 24th. 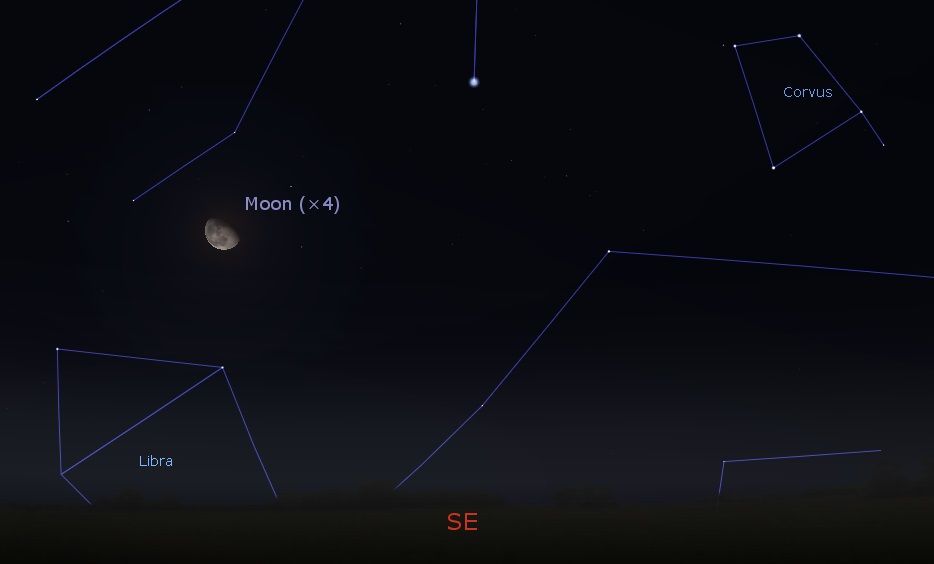 The Moon low in the southeastern sky after midnight on Feb. 24, 2019. Credit: Stellarium / Bob Trembley.

There has been an ongoing discussion/argument among southeastern Michigan astronomers about showing the full Moon to the public; it’s BRIGHT and many of the finer details are washed out. BUT, the reactions from the public are typically the same if they are observing the full Moon, or a first-quarter Moon… they just don’t care – and I’ll take any “Oh WOW!” I can get with my telescope! The full and gibbous Moon also tends to wash out most deep-sky objects.

That being said, there are beautiful features on the Moon that cannot be seen during the full Moon – some can only be observed during a single day; the “Straight Wall” can only be seen on day 8 of the Moon’s orbit. 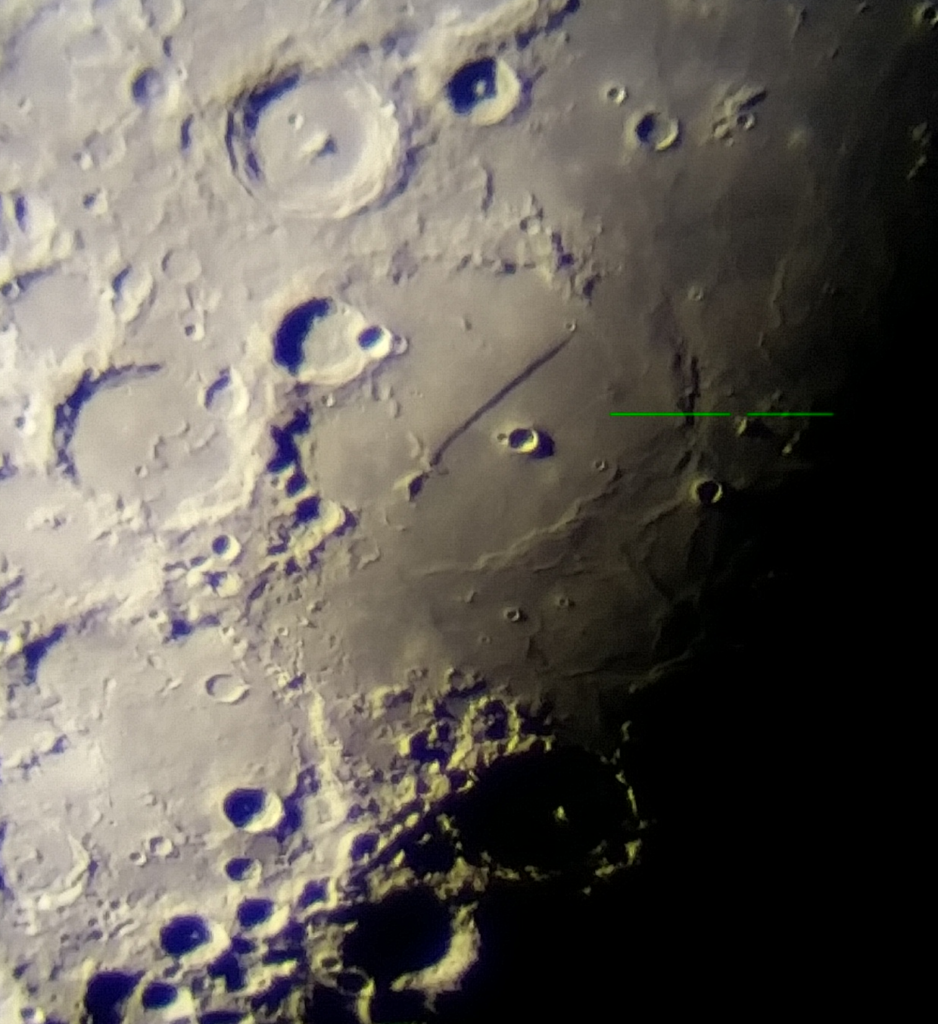 When the Moon is at first quarter, the terminator between sunlit and dark regions is filled with shadows and highlights on craters and mountains; you can watch these features change over the course of several hours.

The Astronomical League has a Lunar Observing Program with 100 targets for you to observe during several phases of the Moon.

International Observe the Moon Night will be held on Oct. 5, 2019 – you can find clubs hosting observing events on the NASA Night Sky Network.

The Sun has been spot-free for 19 days; coronal holes remain open at both northern and southern poles, and there’s a rather interesting area of coronal activity along the equator:

Area of coronal activity on the Sun Feb. 19, 2019. Images courtesy of NASA/SDO and the AIA, EVE, and HMI science teams, edited by Bob Trembley

SpaceWeather.com says: “A stream of solar wind is about to hit Earth’s magnetic field. Estimated time of arrival: Feb. 20th. The gaseous material is flowing from a trans-equatorial fissure in the sun’s atmosphere. Arctic sky watchers can expect minor geomagnetic storms and auroras mixed with bright moonlight when the fast-moving stream arrives.”

Some small prominences all over the Sun the last couple days – the area of coronal loop activity can be seen in the animation below as the bright orange region.

NASA’s SDO satellite rose into the sky atop an Atlas V rocket, 9 yrs ago. Since then it has returned over 350 million images of the Sun, produced over 3K scientific articles & allowed millions to see our star in a new light. Here are a few favorite images: https://t.co/KeA8Zx2rBw pic.twitter.com/k2Np5fyPyM

In this diagram of the inner solar system, all of the fireball orbits from Feb. 17, 2019 intersect at a single point–Earth. Source: Spaceweather.com

Nice #Fireball caught on Video from #Florida this morning around 2am (7:00 Universal Time) – If you saw this event, please report it here: https://t.co/qRilnZsyyF – AMS Event#711-2019 – https://t.co/GvlSm7V6oR pic.twitter.com/muFXjsuOxH

#Meteor Activity Outlook for February 16-22, 2019 https://t.co/ZEKFSubCQX Another slow week for meteors… But it's fireball season! pic.twitter.com/W2c6QPvBsR

When the Comet, #Iwamoto escapes from #NGC2903 #spiral_galaxy

During its routine yearly monitoring of the weather on our solar system's outer planets, Hubble uncovered a new mysterious dark storm on Neptune and provided a fresh look at a long-lived storm circling around the north polar region on Uranus: https://t.co/ErZTfFwZfF pic.twitter.com/NzHhhxOK8n

The MRO (Mars Reconnaissance Orbiter) has photographed the InSight spacecraft, which landed on Mars on November 26, 2018. https://t.co/NVP1CL440E

NASA Ice Giant Orbiters – This is from the “I WISH” Department

I’ve seen a LOT of calls for Ice Giant orbiter missions on Twitter in recent weeks – I couldn’t agree more!

Roses are red.
Neptune is blue.
Send Neptune a mission
(and Uranus, too)! pic.twitter.com/hsjh8GQ8ec

So, I created this pic of a concept Uranus Orbiter using Space Engine and Kerbal Space Program: 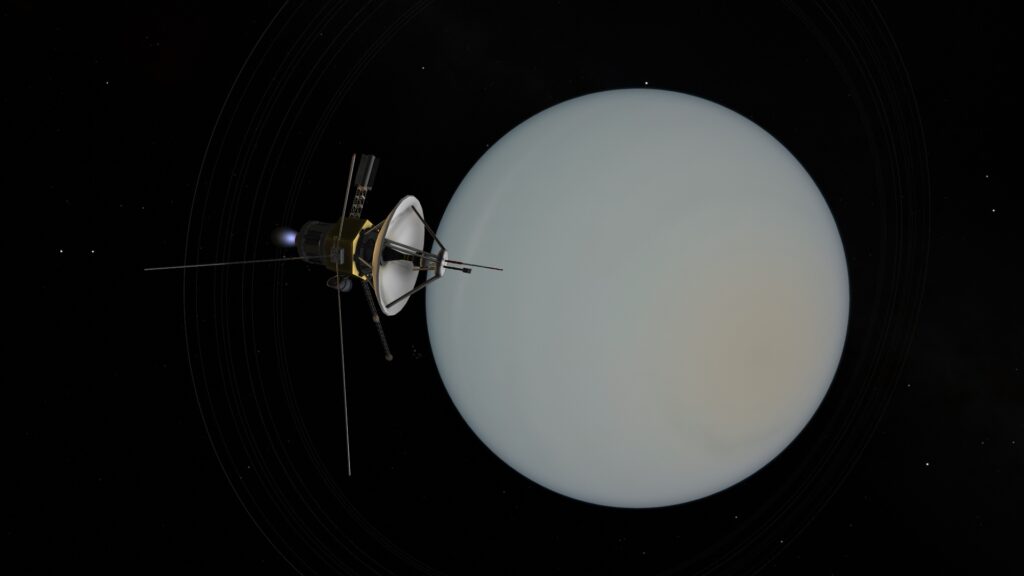 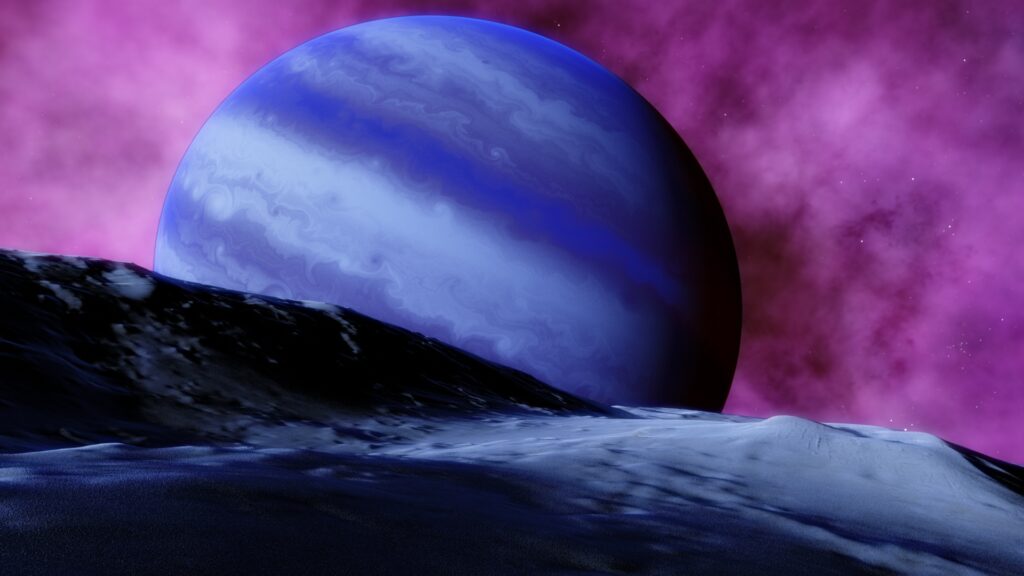 #HubbleFriday Hubble has captured the smoking gun of a newborn star! These five objects, visible in blue in the top center of the image, lie within NGC 1333, a reflection nebula full of gas and dust found about a thousand light-years away from Earth: https://t.co/y9erxz69kz pic.twitter.com/CBaBreyexs

I’m creating several posters for an Astronomy Night event to be held at my wife’s school in March; this image will be one of them: