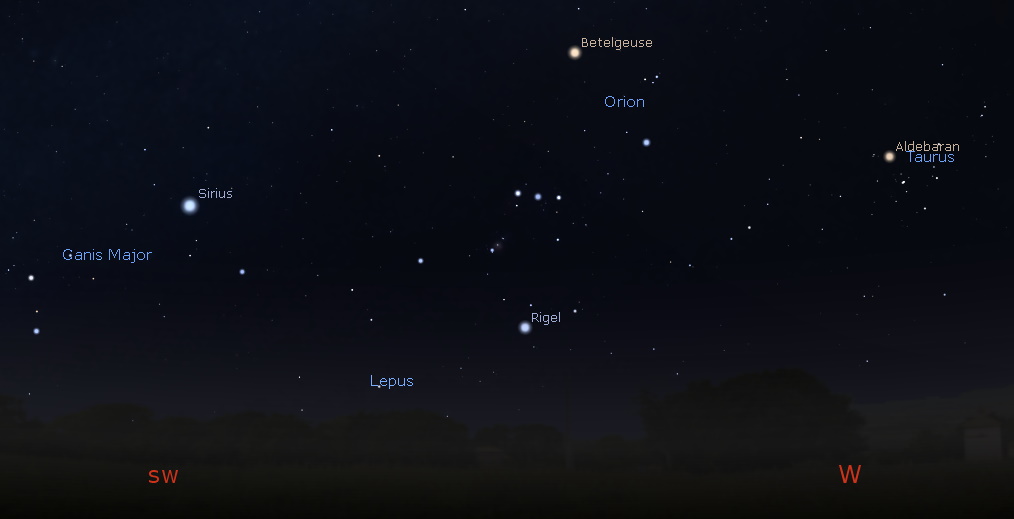 The constellation Orion is moving slowly towards the west each evening; the star Betelgeuse has been dimming since last year, and is no longer in the top 25 brightest stars – which several of my astronomer friends have commented is “just weird!”

As I was writing this post, I saw on SpaceWeather.com that apparently the dimming of Betelgeuse has stopped. 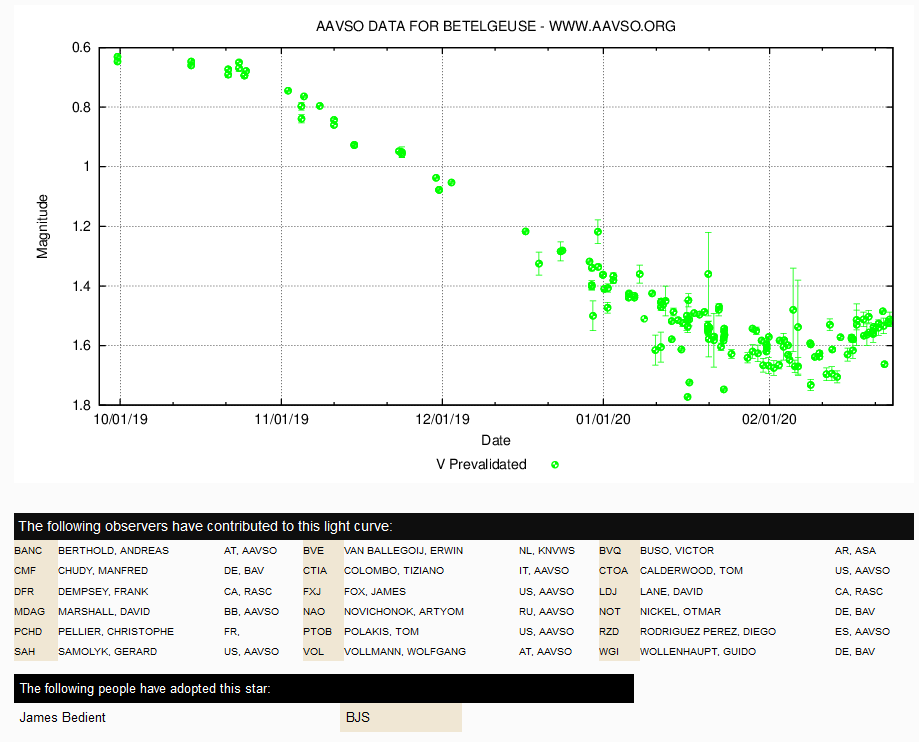 Betelgeuse hit bottom during the week of Feb. 7-13th with a magnitude slightly greater than +1.6. Based on observations, Betelgeuse has apparently stopped dimming and has started to slowly brighten. Credit: American Association of Variable Star Observers (AAVSO)

Predawn observers have three planets to choose from above the southeastern horizon: Saturn, Jupiter and Mars. 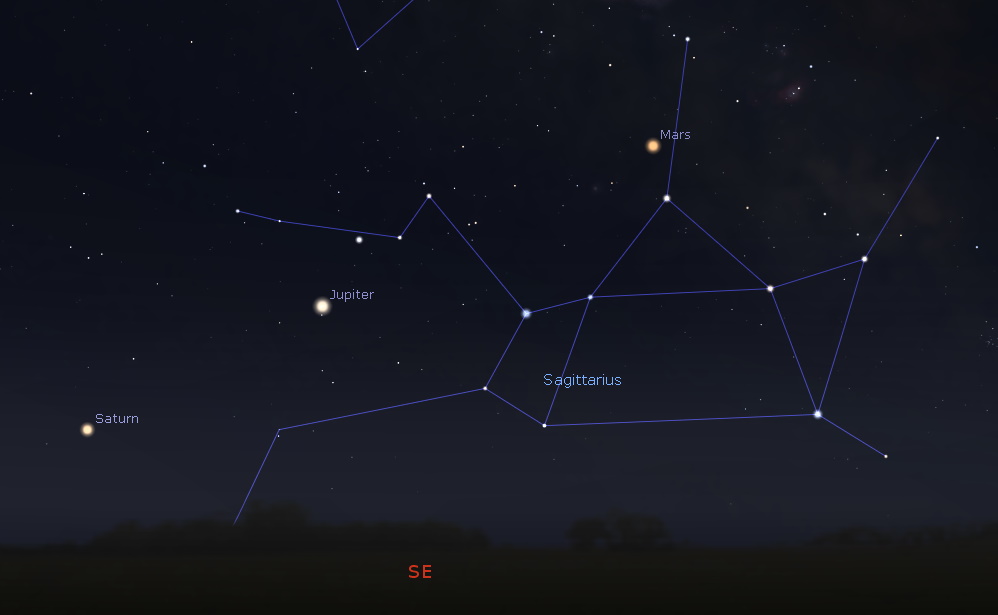 Saturn, Jupiter and Mars appear across the southeastern sky at 6:00 AM this week. Credit: Stellarium / Bob Trembley.

The crescent Moon joins Venus above the western horizon at dusk from February 25th – 28th.

The first quarter Moon occurs on March 2nd, it will be visible high in the southern sky in early evening.

The Moon from 2020-02-25 – 2020-03-02. Visualizations by Ernie Wright / NASA’s Scientific Visualization Studio.
Click this image to go to the NASA 2020 Moon Phase and Libration site. Click the image of the Moon on that site to download a high-rez image of the current Moon phase with the names of craters and other features shown – many along the terminator.

This morning, a NASA hero passed away at the age of 101.

We honor Katherine Johnson's pioneering spirit and incredible contributions to science and spaceflight. Her dedication and skill as a mathematician helped put humans on the Moon. https://t.co/dKW4zxhFau pic.twitter.com/zmuN6LKz49

Some beautiful large prominences on the Sun’s limb over the last several days!

Here’s a still of the SDO eclipse image: 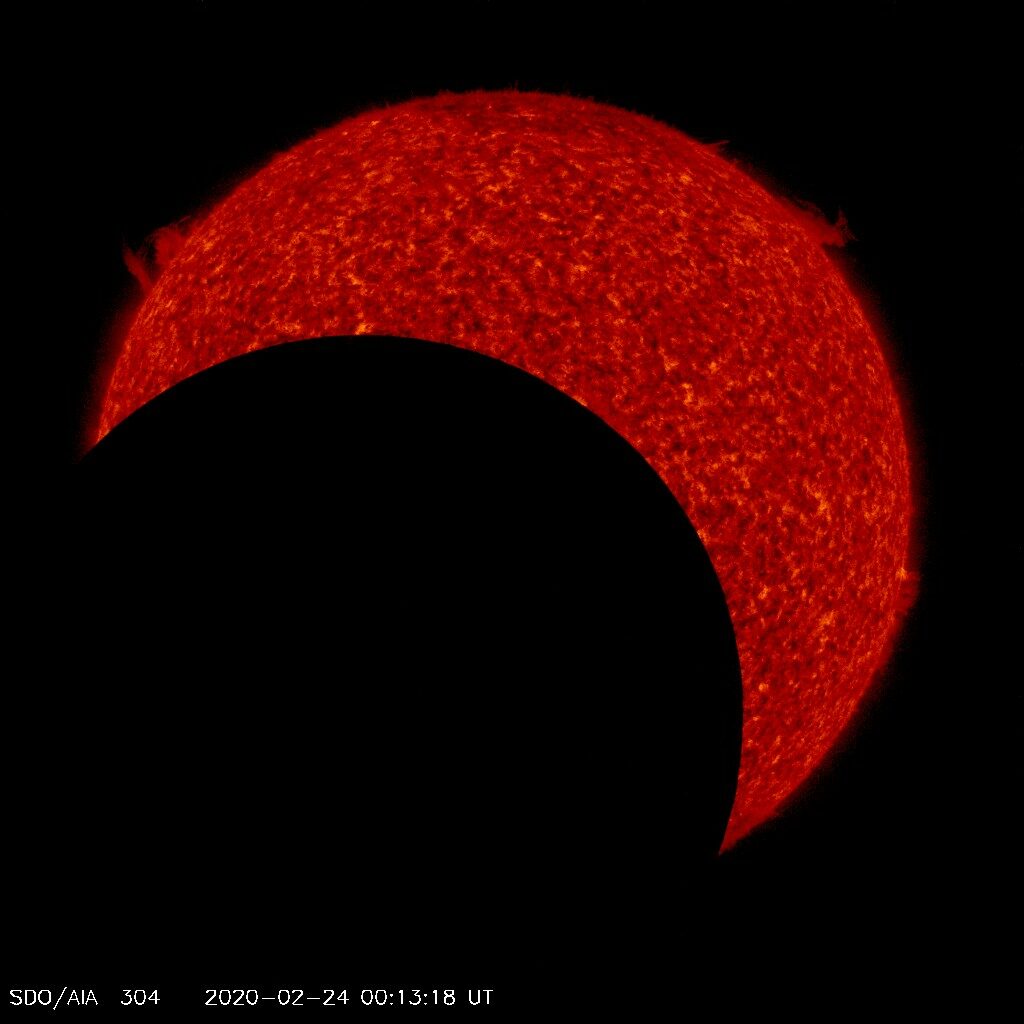 The Sun eclipsed by the Moon on 2020-02-24 as seen by NASA’s Solar Dynamics Observatory. Credit: NASA/SDO and the AIA, EVE, and HMI science teams

A very special #golfball: A study conducted by astronomers using ESO facilities has observed the asteroid Pallas for the first time at extremely high angular resolution.

Fireball & Meteor News: Meteorite Strike May Have Killed a Man in India! 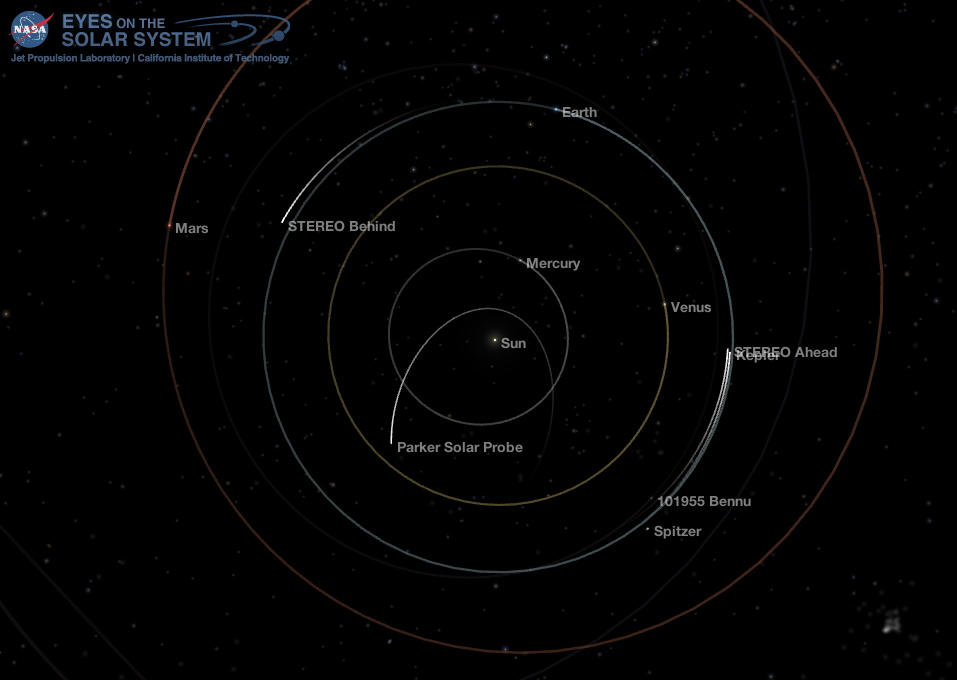 Position of the planets and a couple spacecraft in the inner solar system, 2020-02-25. Credit: NASA Eyes on the Solar System / Bob Trembley.

Position of the planets in the middle solar system – asteroid 4 Vesta is highlighted: 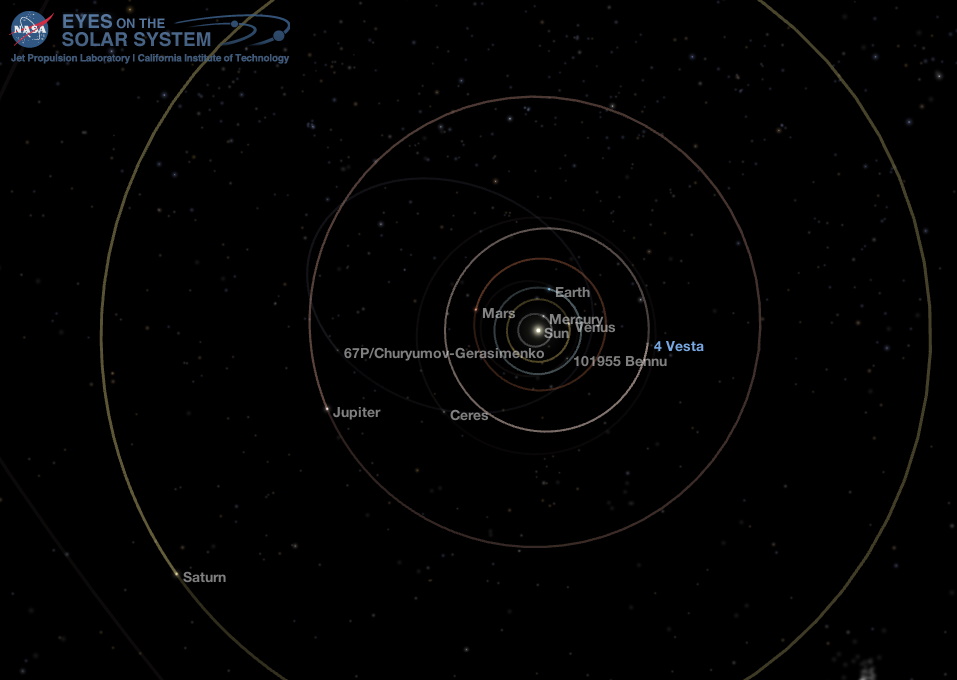 Position of the planets in the middle solar system, 2020-02-25. Credit: NASA Eyes on the Solar System / Bob Trembley. 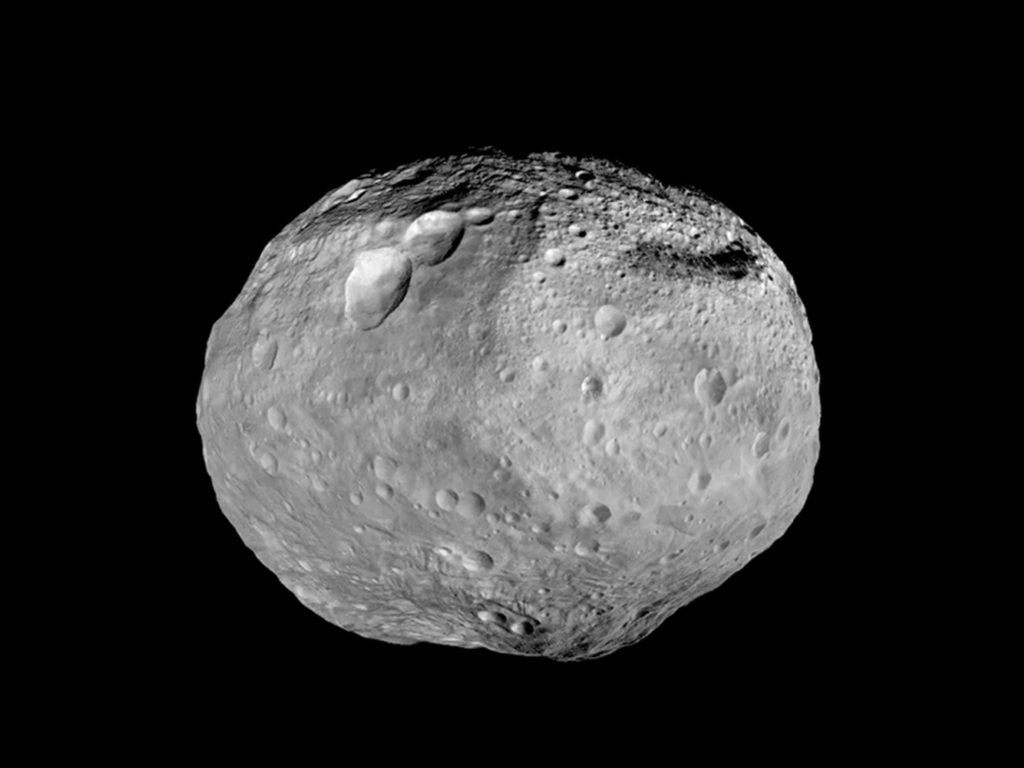 Vesta (minor-planet designation: 4 Vesta) is one of the largest objects in the asteroid belt, with a mean diameter of 525 kilometres (326 mi). It was discovered by the German astronomer Heinrich Wilhelm Matthias Olbers on 29 March 1807 and is named after Vesta, the virgin goddess of home and hearth from Roman mythology.

Vesta is the second-most-massive and probably the second-largest asteroid, after the dwarf planet Ceres, and contributes an estimated 9% of the mass of the asteroid belt. It is probably slightly larger than Pallas, but is about 25% more massive. Vesta is the only known remaining rocky protoplanet (with a differentiated interior) of the kind that formed the terrestrial planets. – Wikipedia

I covered Vesta and Ceres extensively in my series about NASA’s Dawn mission.

3D Model of Vesta – go ahead and grab-and-drag it with your mouse! 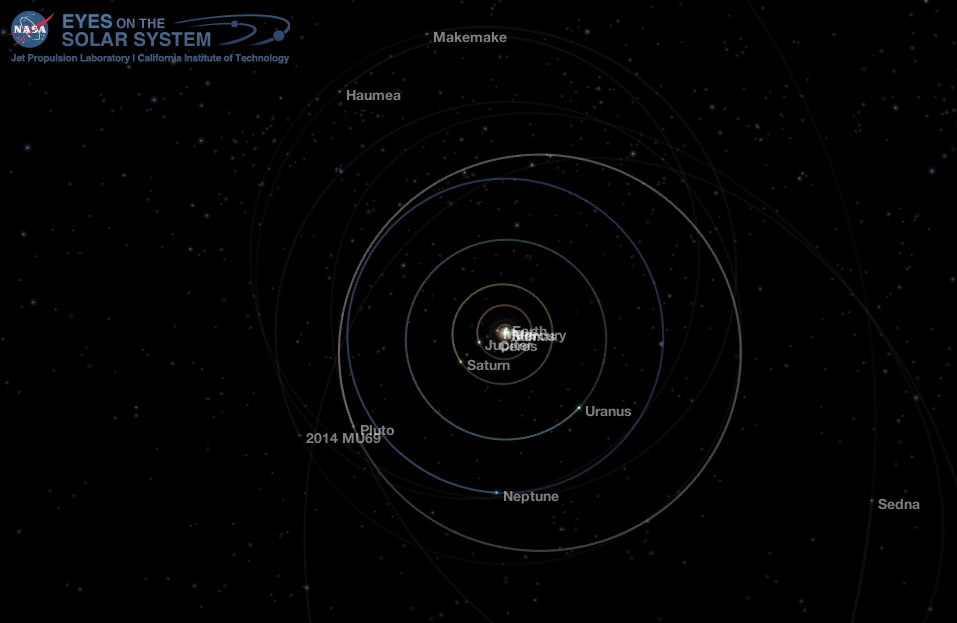 Position of the planets in the outer solar system, 2020-02-25. Credit: NASA Eyes on the Solar System / Bob Trembley.

Smack dab in the middle of sample collection site Osprey.

.@NASAJuno has measured the O/H ratio at Jupiter: 1.1-5.1 times the Solar value. This value, obtained at the equator, implies that the planetesimals that formed Jupiter were unlikely to have been water-rich. Li et al.: https://t.co/KmPxLuUwso pic.twitter.com/RdLRNmCA88

New evidence from Hubble indicates the shape of the Sombrero galaxy is the result of major galaxy mergers, though its smooth disk shows no signs of recent disruption: https://t.co/5V4dJIMvC7 pic.twitter.com/Zdphx1HeW8

Some parts of the Mississippi River Delta are disappearing due to sea-level rise, while other parts are not. A new NASA campaign, Delta-X, will be collecting data by air and by boat to better understand why. https://t.co/xJPIWVG375

Eileen Grzybowski from Oklahoma shares what her and her students observed in the night sky as part of @GLOBEatNight. You can be a #CitizenScientist too! Click the link to learn how:https://t.co/OAJBMBG3hi pic.twitter.com/GMxtt18aeo

Be the 1st in Feb to rate the brightness (or darkness) of your night sky https://t.co/YEK5j3OWnk Join GlobeatNight citizen-science campaign

Continuing with my visual tour of nearby stars and their systems, we travel to Sirius, 8.44 light years distant. 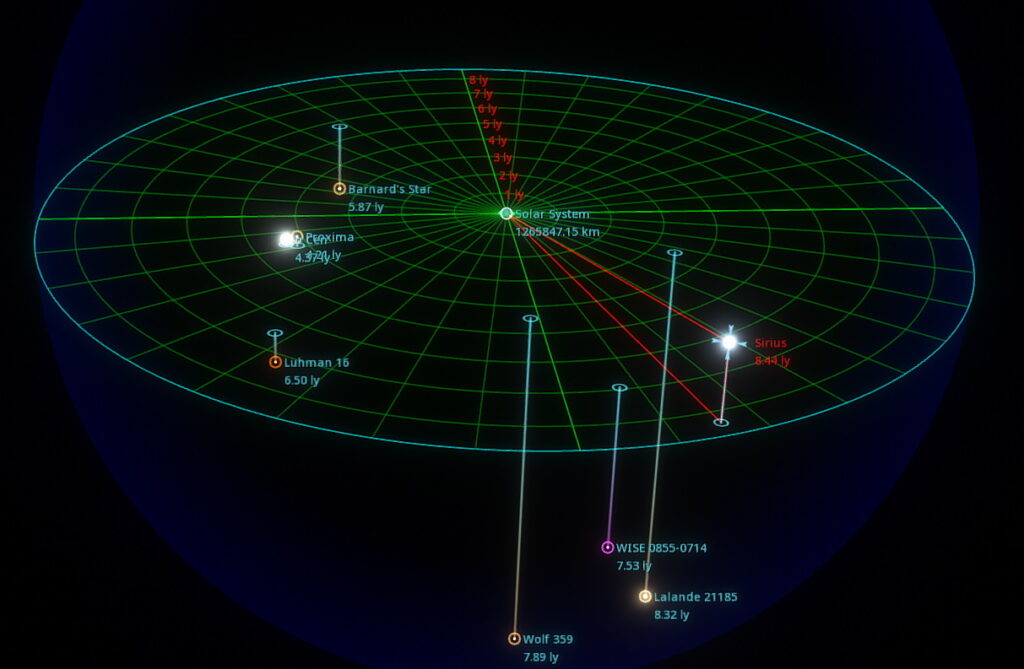 Distance to the Sirius star system from Sol; the plane (green) is aligned with the orientation of the Milky Way galaxy’s plane. Credit: SpaceEngine / Bob Trembley.