This summer’s nationwide library reading program, “A Universe of Stories,” coincides with NASA’s 60th anniversary, and the 50th anniversary of the Apollo 11 Moon landing. The Warren Astronomical Society (Michigan) has received multiple requests from libraries for summer speakers, astronomy programs and display case setups – and they’re still coming in! I’ve reached out to other astronomy clubs and volunteer NASA/JPL Solar System Ambassadors in southeastern Michigan for help covering all the outreach requests. 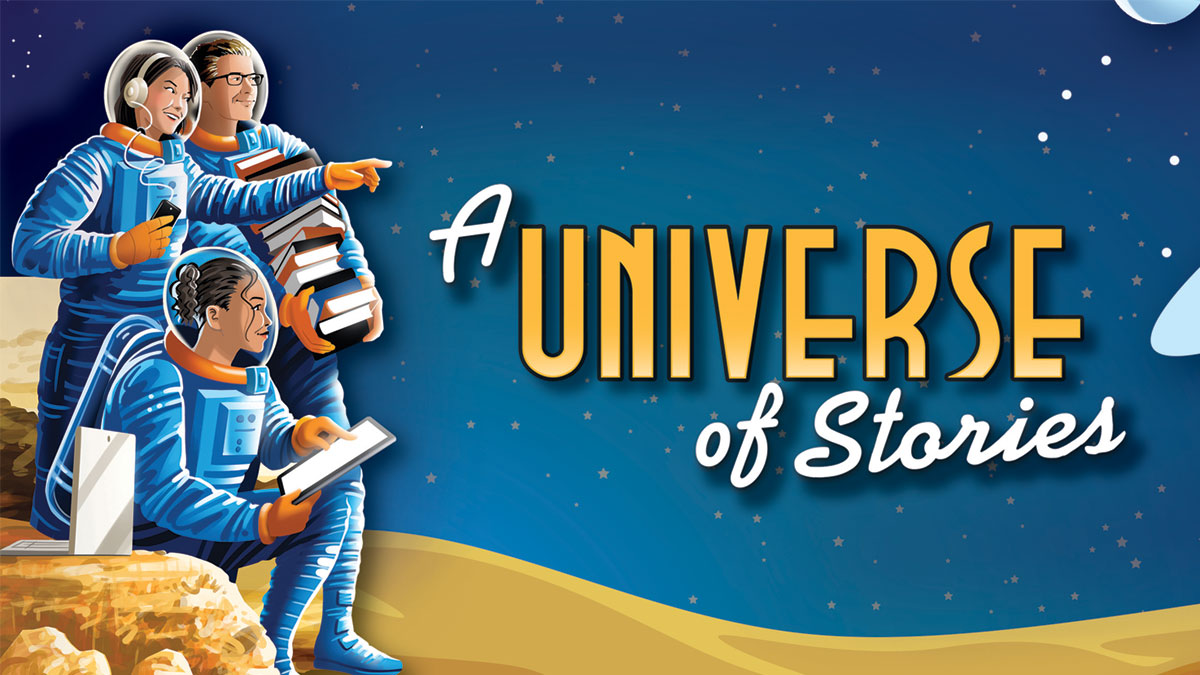 If you are looking for speakers for this summer, Solar System Ambassadors in your state, and local astronomy clubs are a great resource. You can find many clubs and events listed on the NASA Night Sky Network site.

Venus and Saturn continue to spread apart this week, and the waning crescent Moon appears very near several planets in the southeastern predawn sky.

Mercury can be seen very low in the western sky at dusk this week. 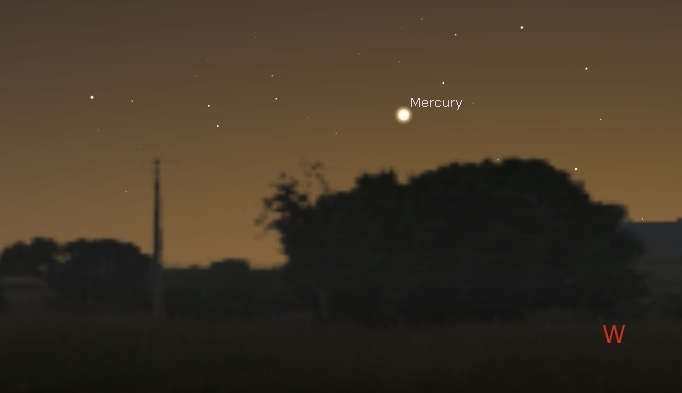 Mars and Uranus are high in the west-southwestern sky before midnight; Mars will be slowly moving away from Uranus all month. 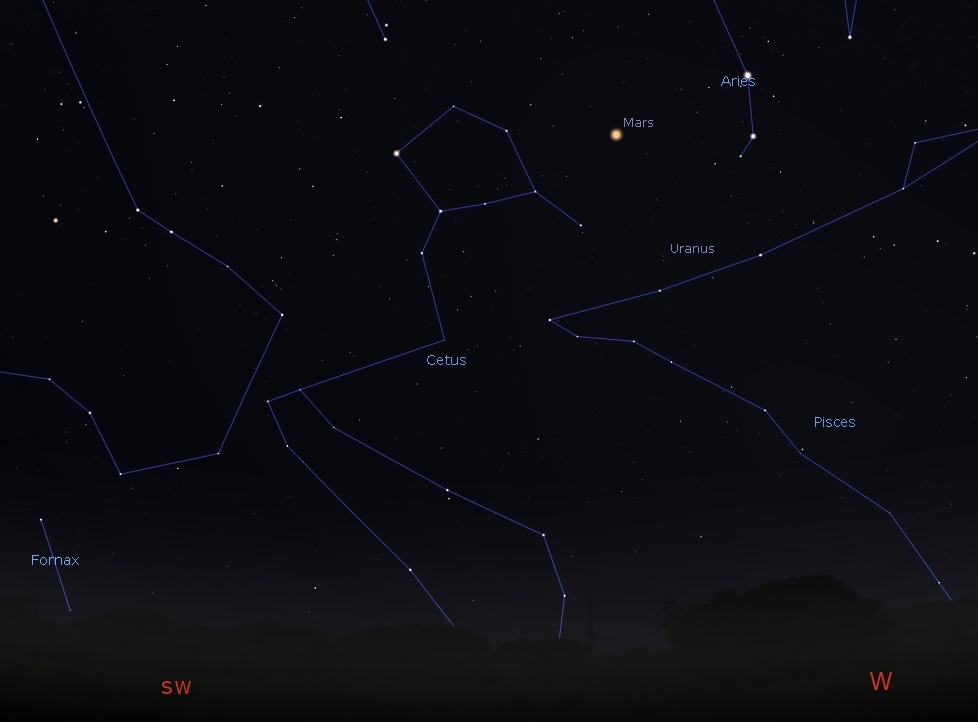 Orion and Taurus can be seen setting in the west shortly after midnight this week. 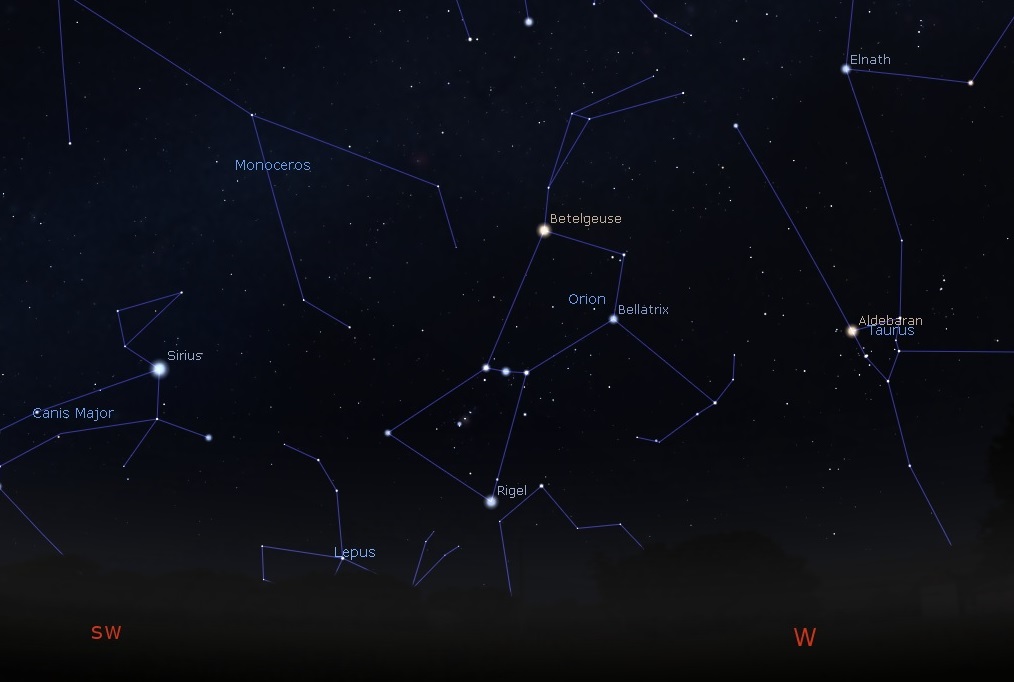 Orion and Taurus set in the west shortly after midnight this week. Credit: Stellarium / Bob Trembley.

The Beehive Cluster (also known as Praesepe (Latin for “manger”), M44, NGC 2632, or Cr 189), is an open cluster in the constellation Cancer. It is one of the nearest open clusters to Earth, containing a larger population of stars than other nearby bright open clusters. Under dark skies, the Beehive Cluster looks like a small nebulous object to the naked eye; as known since ancient times. Classical astronomer Ptolemy described it as “nebulous mass in the breast of Cancer”, and it was among the first objects that Galileo studied with his telescope. – Wikipedia 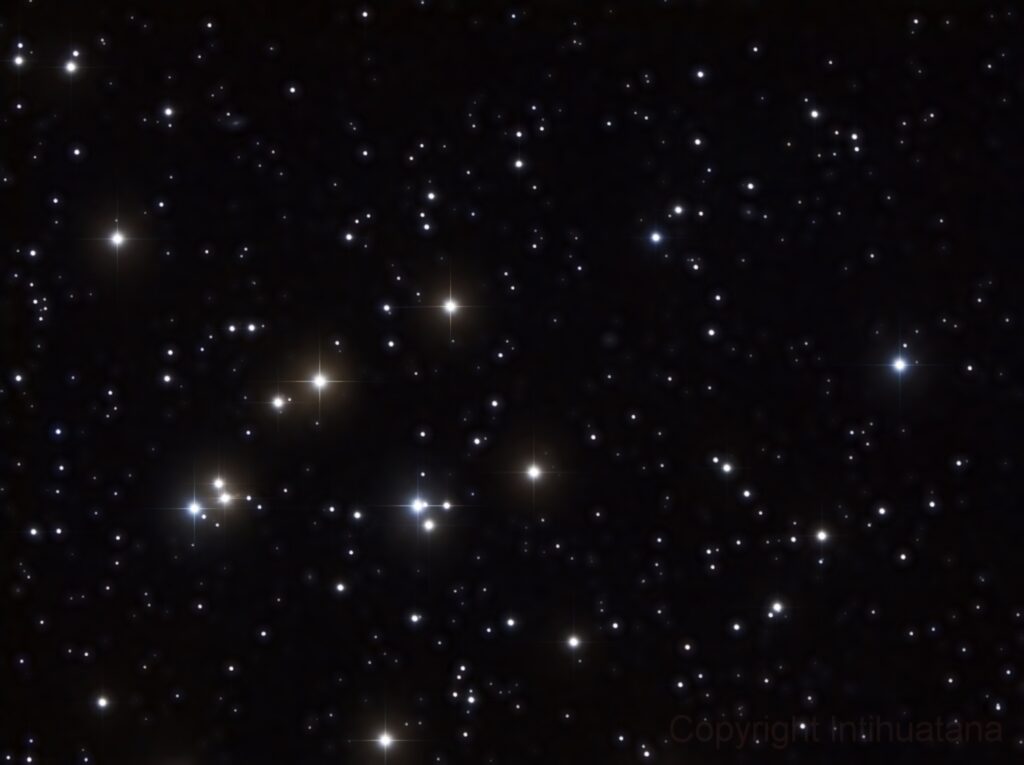 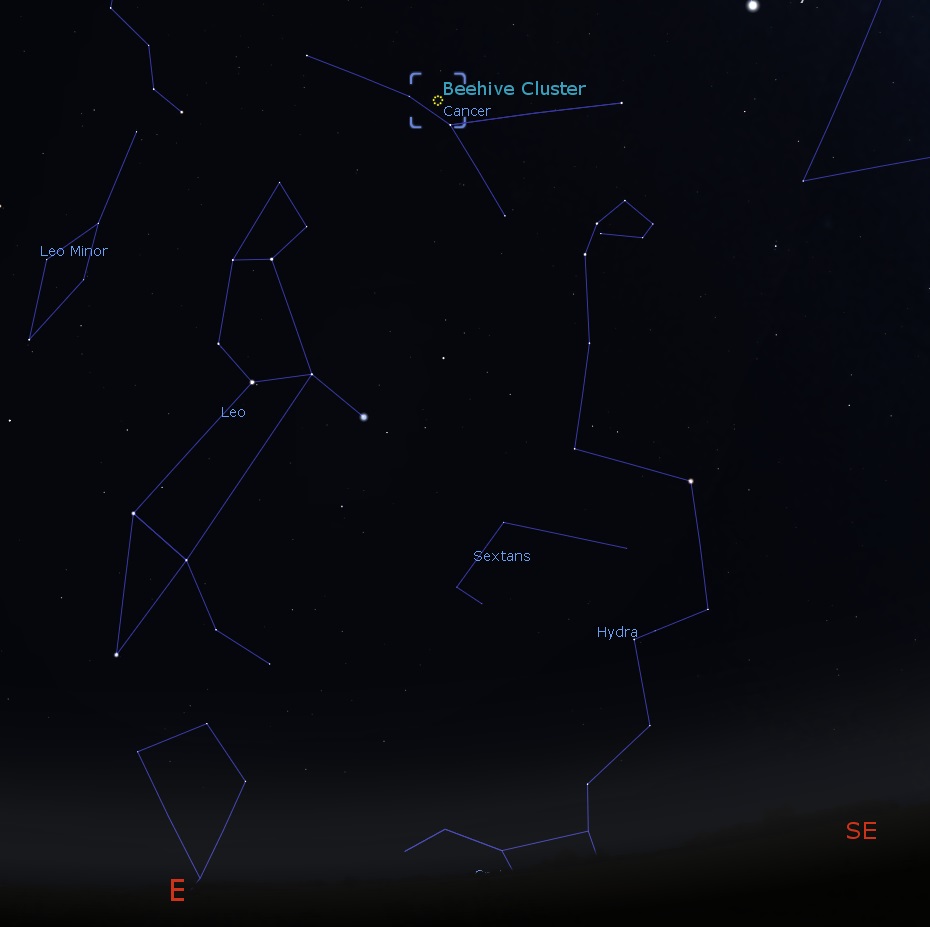 The Sun has been spot-free for 26 days – almost a month! Large coronal holes remain open at both poles, and an irregularly shaped coronal hole along the equator has solar wind pouring out of it.

SpaceWeather.com says: “NOAA forecasters say there is a 50% chance of minor G1-class geomagnetic storms on Feb. 27th when a fast-moving stream of solar wind is expected to hit Earth’s magnetic field. The gaseous material is flowing from a large hole in the sun’s atmosphere, now facing our planet.”

Solar astronomers have had a treat for the last several days, with prominences galore and a beautiful loop on the lower right limb!

Some interesting news from our solar observing fleet:

Measurements from @esa/@NASA's SOHO solar observatory show that Earth's geocorona (a diffuse cloud of hydrogen atoms around our planet) extends farther than previously thought — far enough that even the Moon orbits through it. More from @esascience: https://t.co/0nUFQuoawq pic.twitter.com/v245yJD4Qh

In this diagram of the inner solar system, all of the fireball orbits from Feb. 25, 2019 intersect at a single point–Earth. Source: Spaceweather.com

Sweeping through this stunning field of view, #Comet 71P/Clark really is in the foreground of these cosmic clouds.
You can spot the small coma and short tail of the comet as a faint smudge near the center of the left edge of the frame.
?Raul Villaverde Fraile
RT @SpaceFeatures pic.twitter.com/JccC4t4tsf

REXIS, my student-built x-ray spectrometer, observed Bennu for the first time during Launch +30 months calibrations last weekend! With that milestone, all five of my scientific instruments have now observed the asteroid. https://t.co/rwlJclhc3c

HiRISE 4K: Attempt No Landings Here – The power of HiRISE shows how needed it is when missions are planning to land rovers or, eventually, personnel on the surface on Mars.https://t.co/f0q6SD5blE

Here’s a video scroll over of this incredibly rough terrain on Mars:

This is an image captured just after #haya2_TD! It was taken with the wide-angle ONC-W1 onboard camera and shows the shadow of Hayabusa2 and a region of the surface that seems to have been discoloured by the touchdown. https://t.co/PEE6wfjDHE pic.twitter.com/UQoTNIQgIh

Mirror, mirror on the Moon. By measuring the earthshine reflected by the Moon, scientists can track changes in our climate. More: https://t.co/YoHvoHUt3y pic.twitter.com/AONIWQlSnp 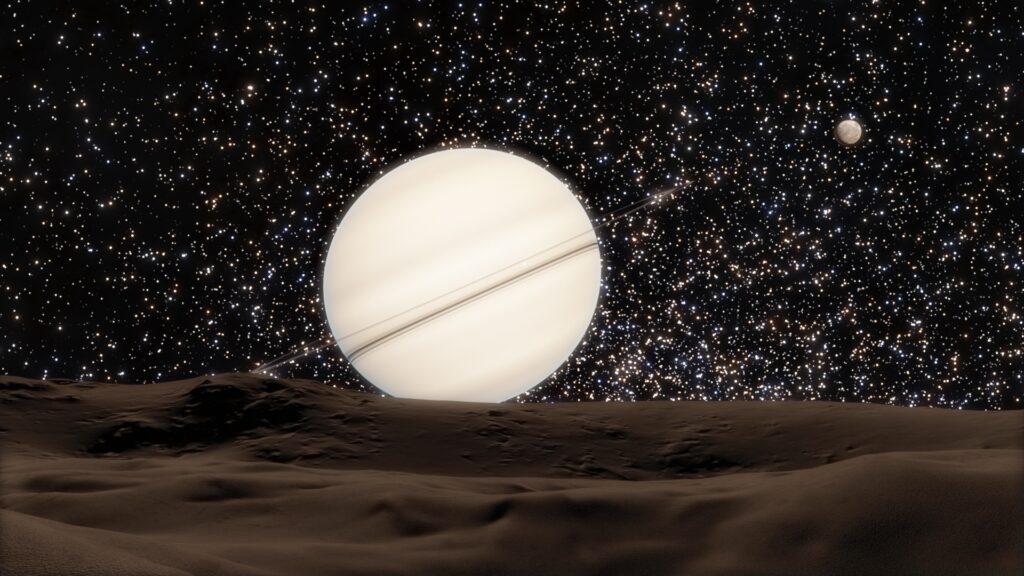 I mentioned last week that I’m creating several posters for an Astronomy Night event to be held at my wife’s school in March;  I found this super hi-rez image of the “Big Dipper” region of Ursa Major – I imagine this will look amazing printed 3’x7′!