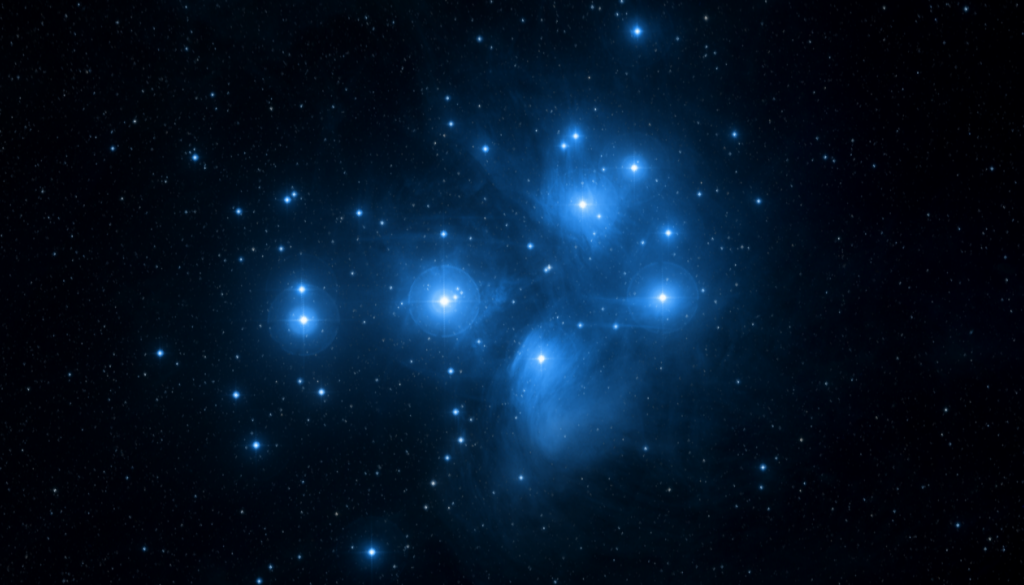 I mentioned in a previous post that I was going to cover star clusters with my school astronomy club – as luck would have it, we’ve not met again since last year. But hey! I can always collect material to present to them next week.

The Pleiades star cluster is one of those objects that first-time binocular and telescope users like to look at – easy to find, and lots of objects. You’re not going to see that blue nebulosity in a small telescope tho – it takes a much larger one (or a time exposure).

One of the most interesting things I find about the Pleiades is that the blue nebulosity those stars are lighting up is not related to those stars – that’s just some random bit of the interstellar medium that they’re passing through on their way!

Jupiter, Saturn and Mercury appear in the southwestern sky after sunset this week.

By the beginning of next week, Saturn will be much lower toward the horizon, and Mercury will be disappearing into the glare of the sun.

Mars and the star Antares appear above the southeastern horizon before sunrise all week.

By the beginning of next week, Venus makes a return to the southeastern predawn sky.

The Moon appears near the Pleiades star cluster high in the southeastern sky after sunset on Jan. 12th.

The Moon appears near the star Aldebaran high in the southeastern sky after sunset on Jan. 13th.

The Moon appears within the winter hexagon in the east-southeastern sky after sunset on Jan. 14th & 15th.

The Moon appears near the star Pollux in the eastern sky after sunset on Jan. 16th and 17th.

Project Diana was the first experiment in radar astronomy.

The experiment bounced radar echoes off the Moon in 1946 to study the Earth’s atmosphere. [Link]

The Sun has three named sunspots, and a tiny one in the northern hemisphere that will likely get its own designation. Spaceweather.com says “All of these sunspots have stable magnetic fields that pose little threat for strong flares,” that being said, from the videos below, they are producing a lot of weaker flares.

There is coronal loop activity associated with each active region. A large coronal hole is in the southern hemisphere, rotating into view; coronal holes appear at both poles – both about the same medium size.

Several smaller prominences, and a couple larger but short-lived ones. Each of the active regions are easily visible, and appear to be spouting small flares.

My wife and I both noticed a different timbre to the sound of the bolide compared to thunder.

Issues in a widely accessed article?

Mark Boslough  points out some inconsistencies in the article about an aerial explosion that destroyed a Bronze Age city.

Position of the planets & several spacecraft in the inner solar system on January 11th:

The Pleiades, also known as The Seven Sisters, Messier 45, and other names by different cultures, is an asterism and an open star cluster containing middle-aged, hot B-type stars in the north-west of the constellation Taurus. At a distance of about 444 light years, it is among the nearest star clusters to Earth. It is the nearest Messier object to Earth, and is the most obvious cluster to the naked eye in the night sky.

The cluster is dominated by hot blue and luminous stars that have formed within the last 100 million years. Reflection nebulae around the brightest stars were once thought to be left over material from their formation, but are now considered likely to be an unrelated dust cloud in the interstellar medium through which the stars are currently passing. This dust cloud is estimated to be moving at a speed of approximately 18 km/s relative to the stars in the cluster.

Computer simulations have shown that the Pleiades were probably formed from a compact configuration that resembled the Orion Nebula. Astronomers estimate that the cluster will survive for about another 250 million years, after which it will disperse due to gravitational interactions with its galactic neighborhood.

Together with the open star cluster of the Hyades, the Pleiades form the Golden Gate of the Ecliptic. – Wikipedia