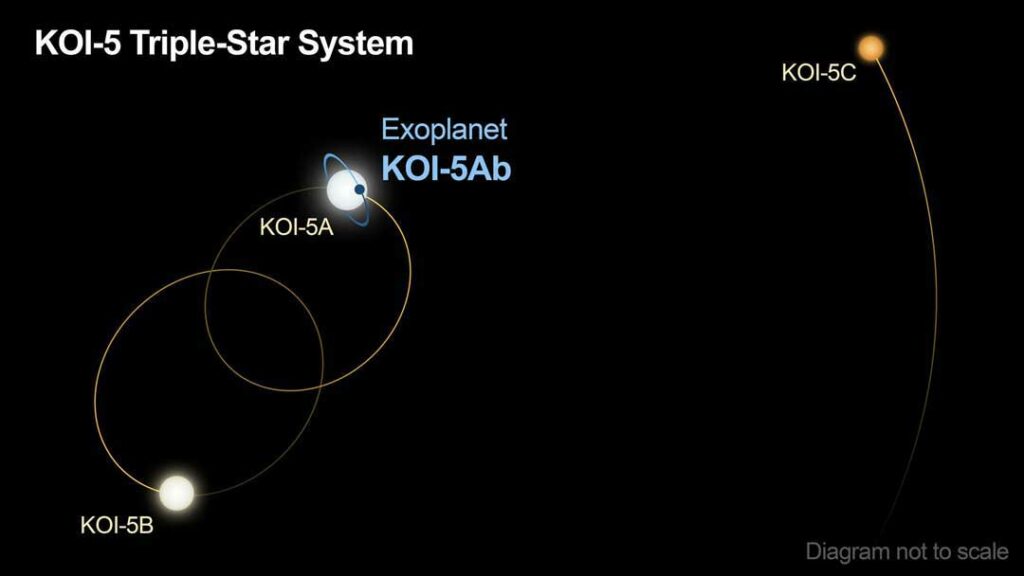 Venus appears very low above the southeastern horizon before sunrise. 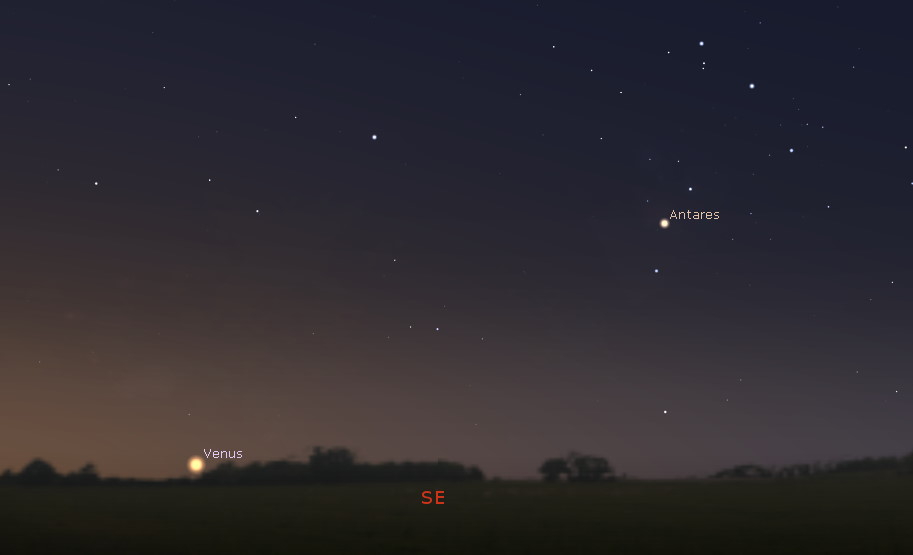 Jupiter, Saturn and Mercury continue to form a triple conjunction in the southwestern sky at dusk – Saturn may be a bit difficult to see; Mercury appears slightly higher above the horizon each evening.

Mercury appears in the southwestern sky at dusk – the Moon joins Mercury on the evening of Jan 15th. 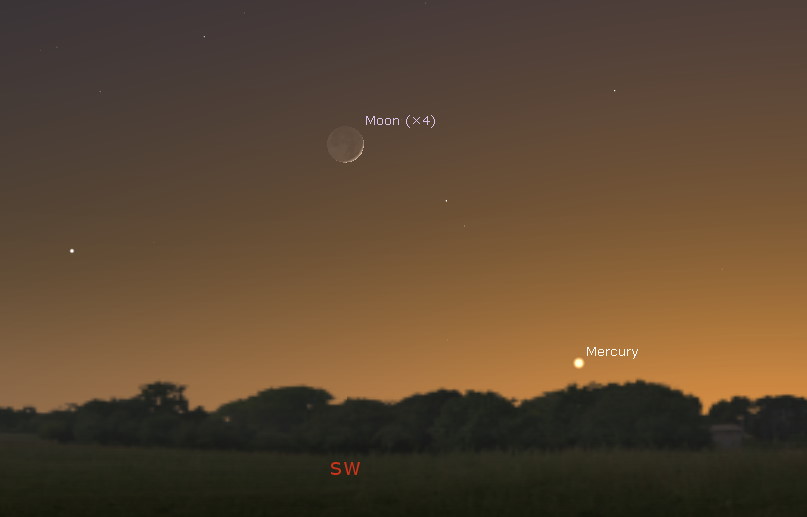 Mars appears high in the southern sky after sunset; the constellations Orion, Taurus and Canis Major appear lower and to the east of Mars. 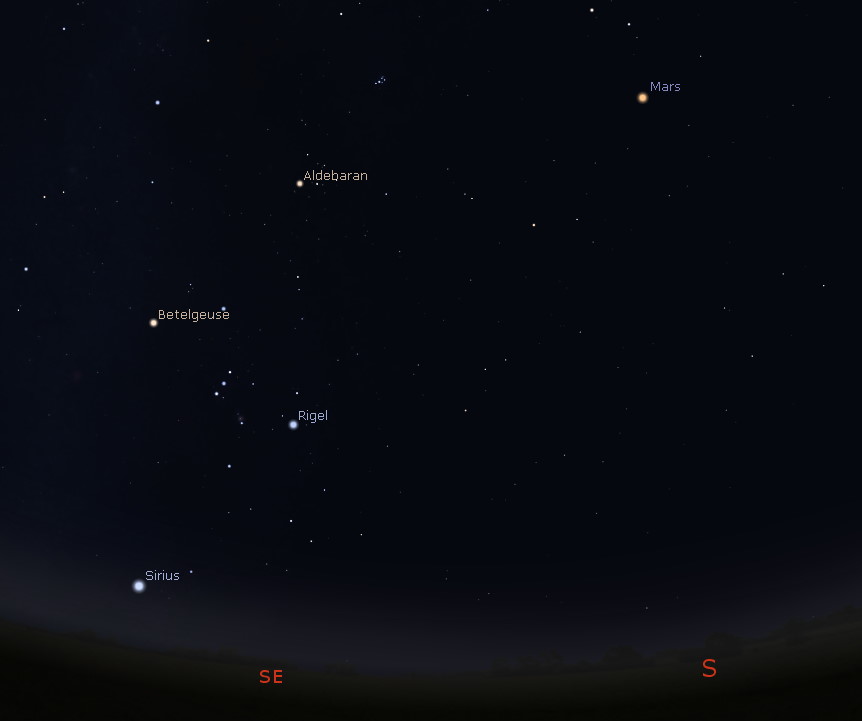 If you look almost straight up at 3:00 AM, you can sky-hop from the Big Dipper to Arcturus and Spica. 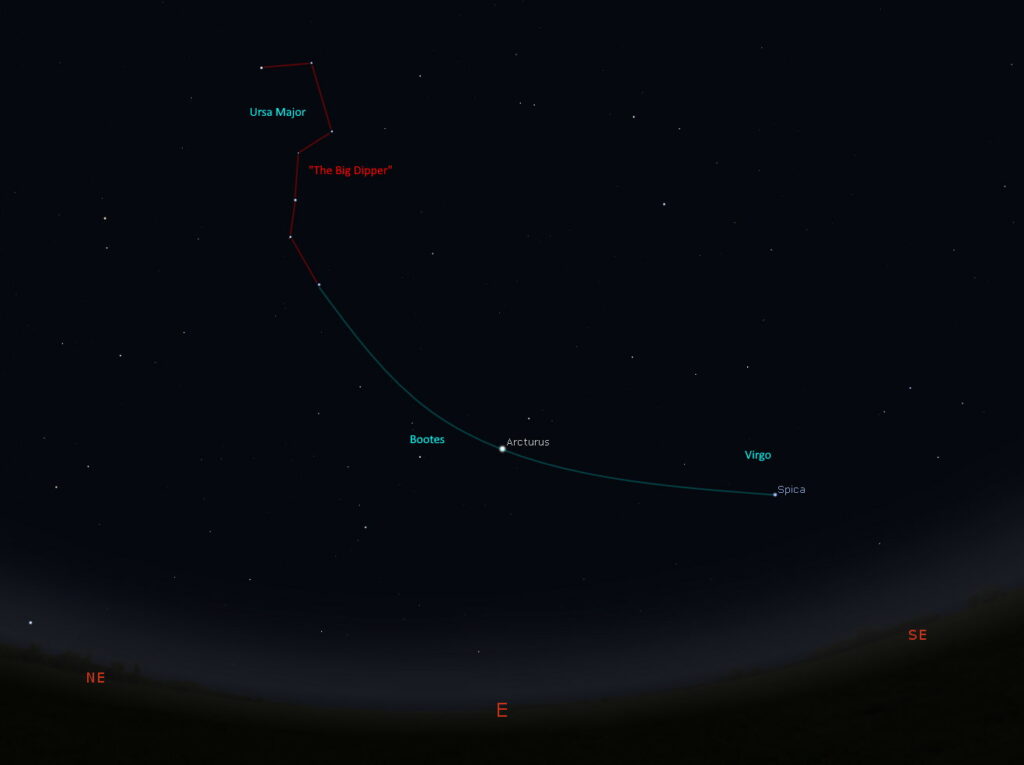 Sky Hopping with the Big Dipper at 3:00 AM. Credit: Bob Trembley / Stellarium.

The new Moon occurs on Jan. 13th – the Moon will be hidden in the glare of the Sun.

After Jan. 13th, the Moon will be a waxing crescent – visible toward the southwest in early evening.

If you click on the Moon image above, or click this link, you will go to NASA’s Moon Phase and Libration, 2021 page – it will show you what the Moon looks like right now. If you click the image on that page, you will download a high-rez TIF image annotated with the names of prominent features – helpful for logging your observations!

This year, tiny cameras will head to the Moon aboard a landing spacecraft as part of our @NASAArtemis program. They’ll help picture & study craters made when touching down on the lunar surface to help predict landing impacts. More: https://t.co/XlOsu20l32 pic.twitter.com/WMXFJwj33g

We're now targeting Sat., Jan. 16 for a hot fire test of the rocket that will launch @NASAArtemis I to the Moon.

The Sun has been spot-free for 9 days.

The northern coronal hole remains diminished; the southern coronal hole has opened up a bit, and has a very large tendril stretching up towards the equator that is rotating in to view. Above that tendril is a bright region of coronal activity without a sunspot.

A couple long-lived prominences appear on the Sun’s limb over the last couple days; that region of coronal activity appears like an orange scar seen in the video below.

Uranus and Neptune may be far from the Sun, but they can be just as vulnerable to its influence as the closer planets. New NASA research finds that intense solar activity can trigger new “magnetic seasons” on these icy worlds. https://t.co/Z6xTdjimHS pic.twitter.com/B6C22lVjkB

Nanoflares are a long-theorized — but still unconfirmed — candidate for the incredible heating of the Sun's outer atmosphere. Using data from two NASA satellite missions, scientists may have made the first observation of a nanoflare from start to finish: https://t.co/DO4UOG4jvt pic.twitter.com/UYdjr6IzA1

I’m not at all sure how I missed the Asteroid Terrestrial-impact Last Alert System account on Twitter, but I’m following them now!

Our SAAO colleagues have completed the assembly of the ATLAS dome! Thanks to Nic and Willie for recording it!https://t.co/WXdIOvARIy 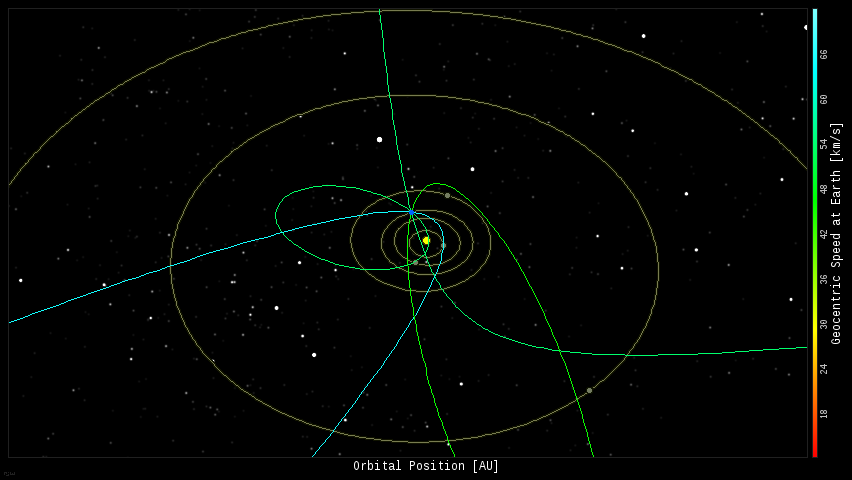 We confirm. It looks like a fireball – https://t.co/xg1AiMyhD0 – We didn't receive any reports about this event so far though. 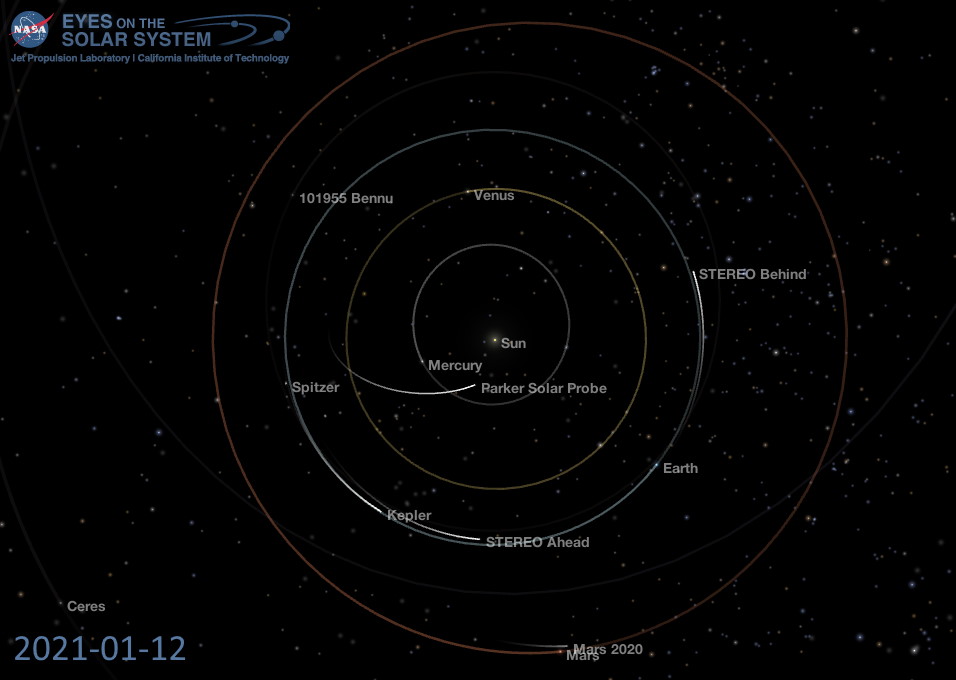 Position of the planets and a couple spacecraft in the inner solar system, 2021-01-12. Credit: Bob Trembley / NASA Eyes on the Solar System.

Position of the planets in the middle solar system – the orbit of comet 67P/Churyumov-Gerasimenko is highlighted: 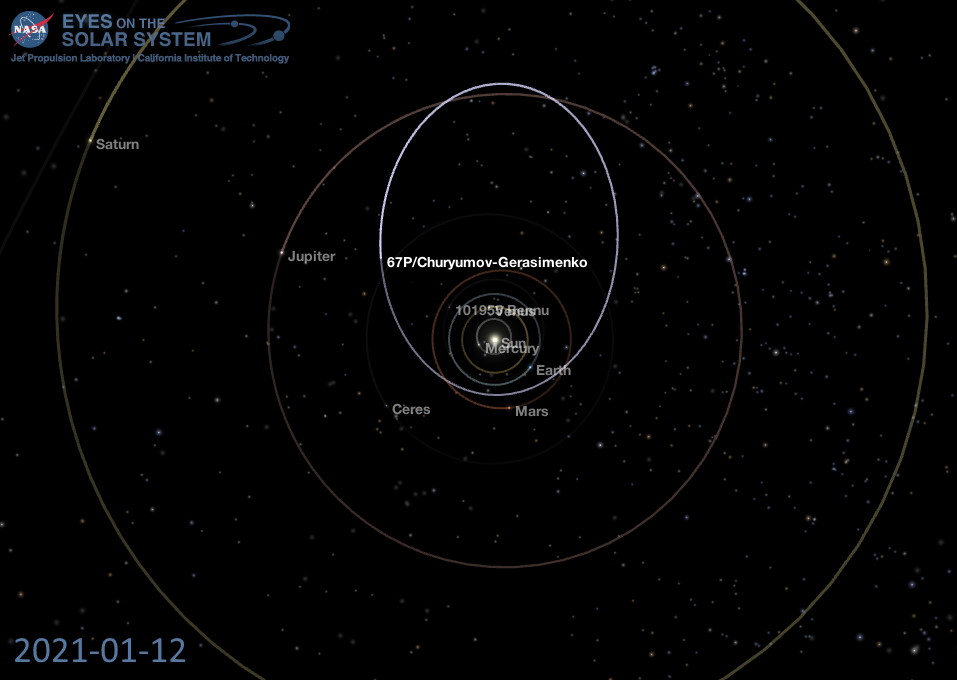 Position of the planets in the middle solar system, 2021-01-12. Credit: Bob Trembley / NASA Eyes on the Solar System.

Position of the planets, dwarf planets and some transneptunian objects in the outer solar system – the orbit of dwarf planet 225088 Gonggong (2007 OR10) is highlighted: 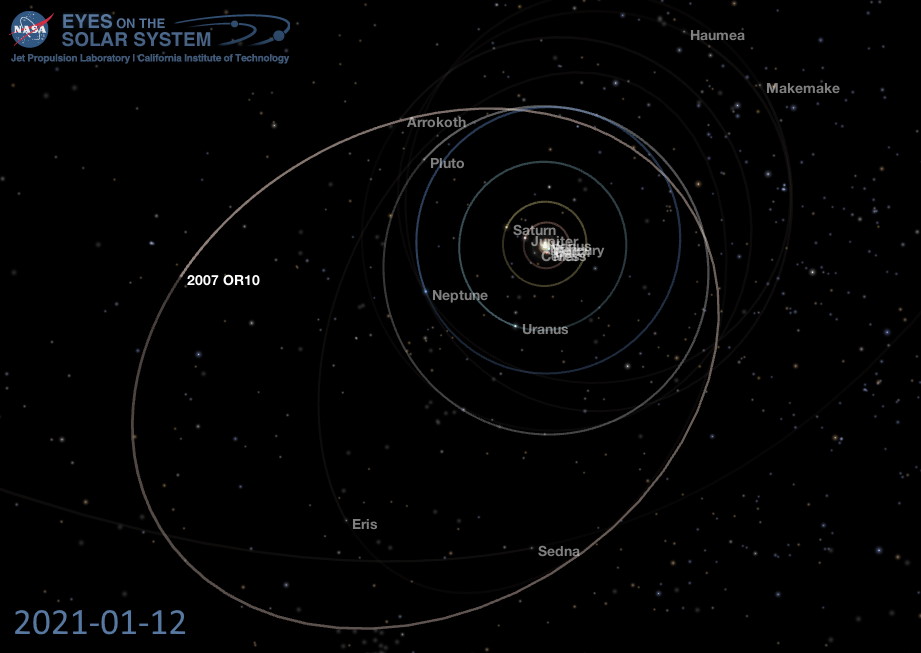 Position of the planets and some transneptunian objects in the outer solar system, 2021-01-05. Credit: Bob Trembley / NASA Eyes on the Solar System.

Students, join me on the #CountdownToMars! Build your own mission and “land” it along with me when I touch down on February 18. Register and let's go together: https://t.co/D9EO9ra8IX

Plus: Reply with questions about my mission for a chance to be featured LIVE on landing day. pic.twitter.com/GovKp1JWHF

The Atmospheric Waves Experiment has passed another step towards a 2022 launch! AWE will study atmospheric gravity waves — which shape our upper atmosphere's response to space weather — from its vantage point on the @Space_Station. More from @USUAggies. ⬇️ https://t.co/lVleyKGN3Y

#OTD in 2007, HiRISE, a camera aboard the Mars Reconnaissance Orbiter, captured this photo of Jupiter from Mars orbit. @NASAMars pic.twitter.com/lwMqzbjwAy

Putting in some overtime: the @NASAInSight Mars lander and the #JunoMission Jupiter orbiter have received mission extensions. An independent review panel found that both are likely to bring new discoveries – and new questions – about our solar system: https://t.co/fHSJoYZTQa pic.twitter.com/e1pgjsXCAk

Attention bookworms! ? Discover the story of Hubble in a newly released book all about the riveting history of the telescope and its first 30 years operating in space. “Not Yet Imagined” is available for FREE download now!

The first of two identical satellites to be launched five years apart, Sentinel-6 Michael Freilich will make high precision ocean altimetry measurements to continue the work previously done by Jason-1, Jason-2/OSTM, and the Jason-3 missions. A secondary objective is to collect high resolution vertical profiles of temperature and water vapor through the Radio Occultation instrument. This is used to help numerical weather predictions.

Sometimes, doing these posts, I come across something that makes me go “Oh WOW!” This is one of those!

?Discovery Alert!?
Astronomers have confirmed an exoplanet – a planet beyond our solar system – orbiting in a triple-star system ~1,800 light-years away.
It took years, and some scientific detective work with multiple telescopes to confirm KOI-5Ab. https://t.co/wpT2RZUt1x pic.twitter.com/Z1PJC6GTVm

The KOI-5 star system consists of three stars, labeled A, B, and C in this diagram. Star A and B orbit each other every 30 years. Star C orbits stars A and B every 400 years. The system hosts one known planet, called KOI-5Ab, which was discovered and characterized using data from NASA’s Kepler and TESS (Transiting Exoplanet Survey Satellite) missions, as well as ground-based telescopes. KOI-5Ab is about half the mass of Saturn and orbits star A roughly every five days. Its orbit is titled 50 degrees relative to the plane of stars A and B. Astronomers suspect that this misaligned orbit was caused by star B, which gravitationally kicked the planet during its development, skewing its orbit and causing it to migrate inward. 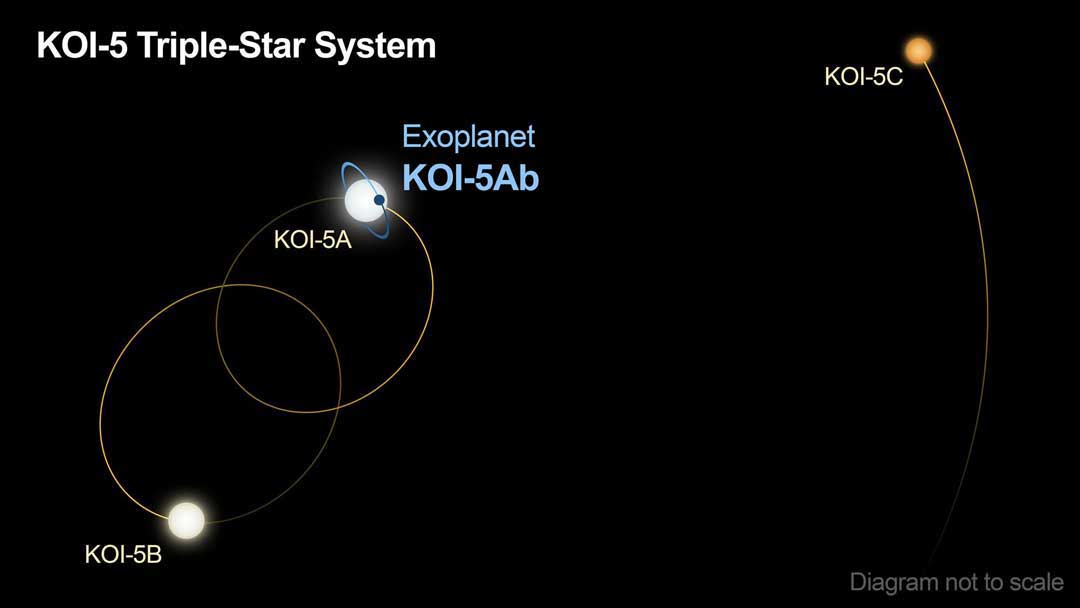 This picture is the one my wife said “THAT one!” to: 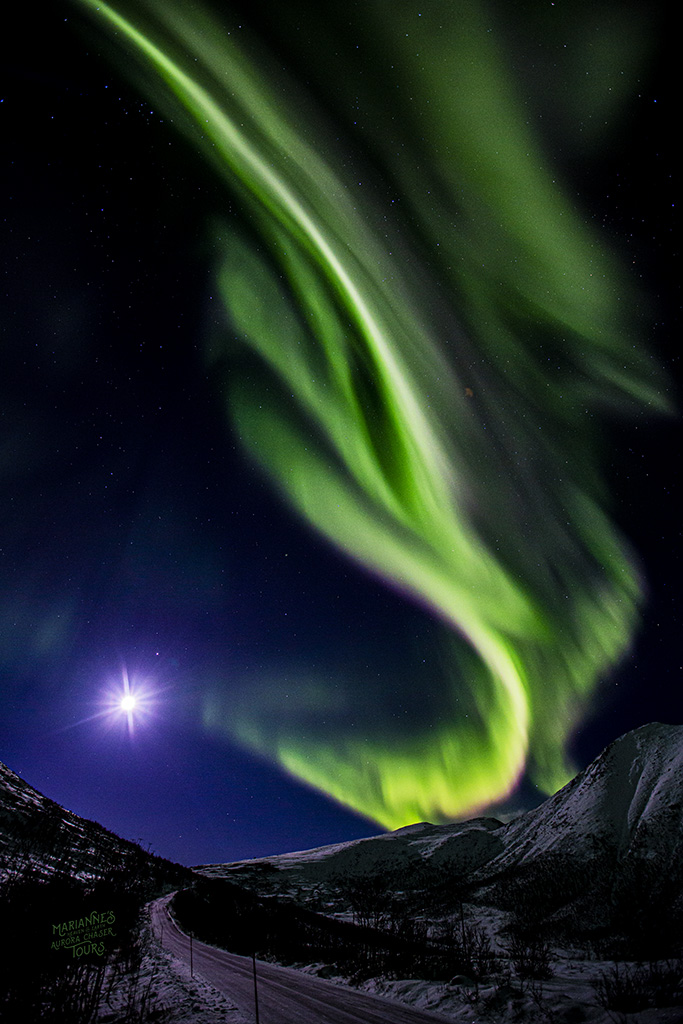 Here's insight from a recent study on how artificial nightlight affects predator-prey interactions. This is one of the first research studies done to examine the ecological impacts of #lightpollution on a large scale. https://t.co/yKf8oaN9HN

The galaxy NGC 6946 is nothing short of spectacular. In the last century alone, NGC 6946 has experienced 10 observed supernovae, earning its nickname as the Fireworks Galaxy. In comparison, our Milky Way averages just one to two supernova events per century. This NASA/ESA Hubble Space Telescope image shows the stars, spiral arms, and various stellar environments of NGC 6946 in phenomenal detail.

We are able to marvel at NGC 6946 as it is a face-on galaxy, which means that we see the galaxy “facing” us, rather than seeing it from the side (known as edge-on). The Fireworks Galaxy is further classified as an intermediate spiral galaxy and as a starburst galaxy. The former means the structure of NGC 6946 sits between a full spiral and a barred spiral galaxy, with only a slight bar in its center, and the latter means it has an exceptionally high rate of star formation.

The galaxy resides 25.2 million light-years away, along the border of the northern constellations of Cepheus and Cygnus (The Swan). 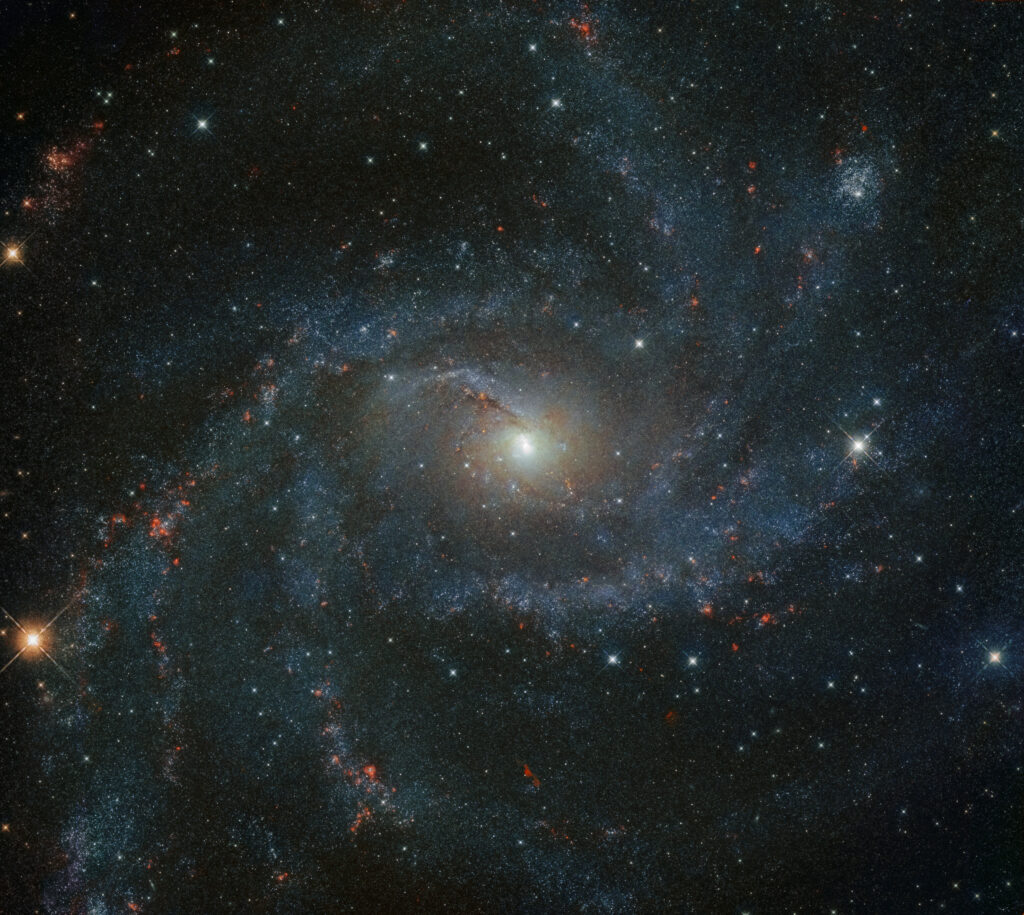