We’re running a membership drive this month – our goal is 150 new members. Please subscribe and help support this website and VOF education and outreach programs.

The constellation Orion appears high in the southwestern sky at midnight this week; at the latest meeting of the Warren Astronomical Society, the dimming of the star Betelgeuse was discussed – members mentioned that the star had almost dimmed to the level of the other three major stars in the constellation… which was “just weird.” 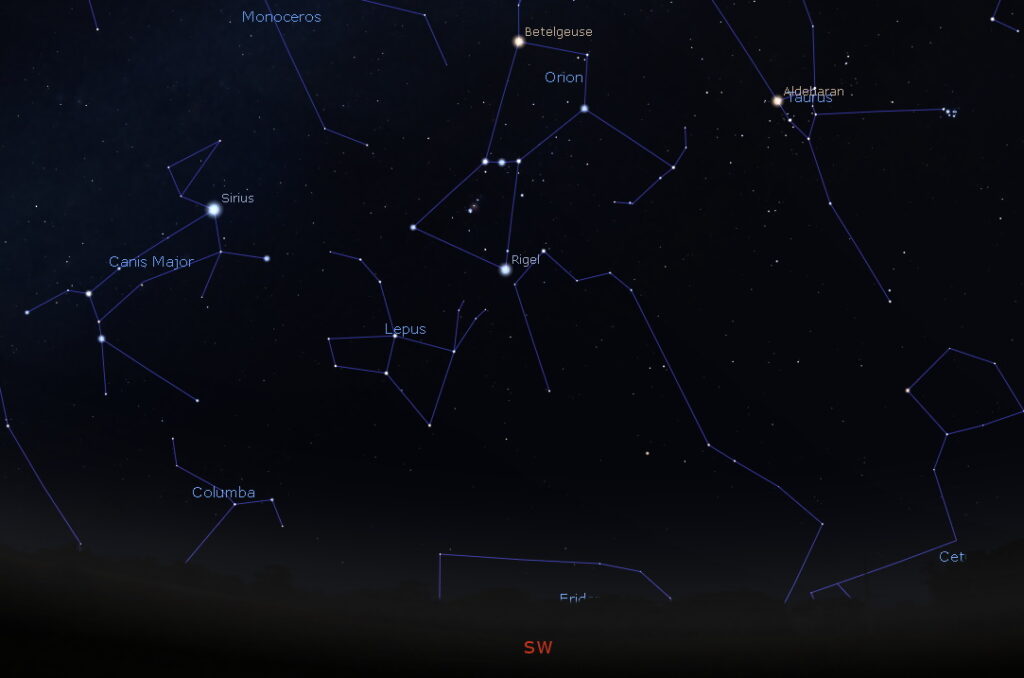 Here's another comparison showing the dimming of #Betelgeuse – this time shot at 50mm focal length (and cropped in on Orion). At left is a shot from Jan 2019, right is the one from last night. Identical equipment/exposures/apertures etc.

Jupiter makes a return to the southeastern at dawn! Jupiter will appear very low on the horizon this week. Mars continues to appear near the star Antares in the southeastern horizon before dawn – a waning crescent Moon joins the planets on January 23 & 24th.

Venus continues to appear high above the southwestern horizon at dusk this week – a thin waxing crescent Moon joins Venus from Jan. 26-29th.

After Jan. 24th, the Moon will be a waxing crescent, visible toward the southwest in early evening.

On Feb. 10, join us for a behind-the-scenes look at how we’re developing and advancing the #Artemis missions to the Moon. Learn about astronaut life in space and tour facilities where engineers design and test the Orion spacecraft and Gateway outpost! https://t.co/6a0qRmuYdz pic.twitter.com/rpoTldLg5t

The Sun has been spot-free for 9 days; coronal holes continue to appear at both poles – the northern hole has reduced in size quite a bit from previous weeks. A small coronal hole appears near the equator; Spaceweather.com says “Solar wind flowing from this minor coronal hole could reach Earth on Jan. 21.”

#ParkerSolarProbe's measurements of the solar wind reveal a chorus of plasma waves that hold clues to the wind's origins — and scientists have turned some of this data into sound. Listen ⬇️ and read more from @JHUAPL: https://t.co/tPW5TnZrUt https://t.co/1B1xPbQvbd

Jupiter is the shepherd for many, many asteroids – this dance of gravity just amazes me!

Millions of asteroids being shepherded by Jupiter. We call them Trojans and Hildas. https://t.co/FjfmZb9eCz https://t.co/KTQ5HHybKZ pic.twitter.com/ioC7OAJjvI

Satellite loop appears to show the flash of the meteorite seen in Puerto Rico this evening! ☄️ @StormHour pic.twitter.com/Mepq8UBUVG

Position of the planets and a couple spacecraft in the inner solar system – the Parker Solar Probe has re-crossed the orbit of Mercury. 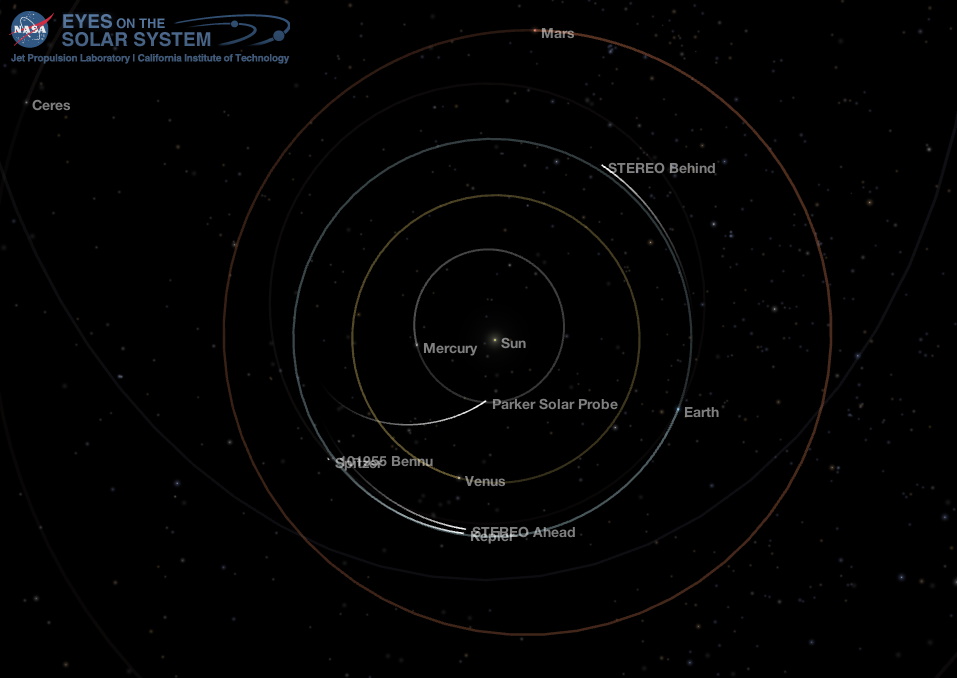 Position of the planets and a couple spacecraft in the inner solar system, 2020-01-21. Credit: NASA Eyes on the Solar System / Bob Trembley.

Position of the planets in the middle solar system – the Earth’s orbit is bringing it around the Sun, and Jupiter is coming back into view at dawn. 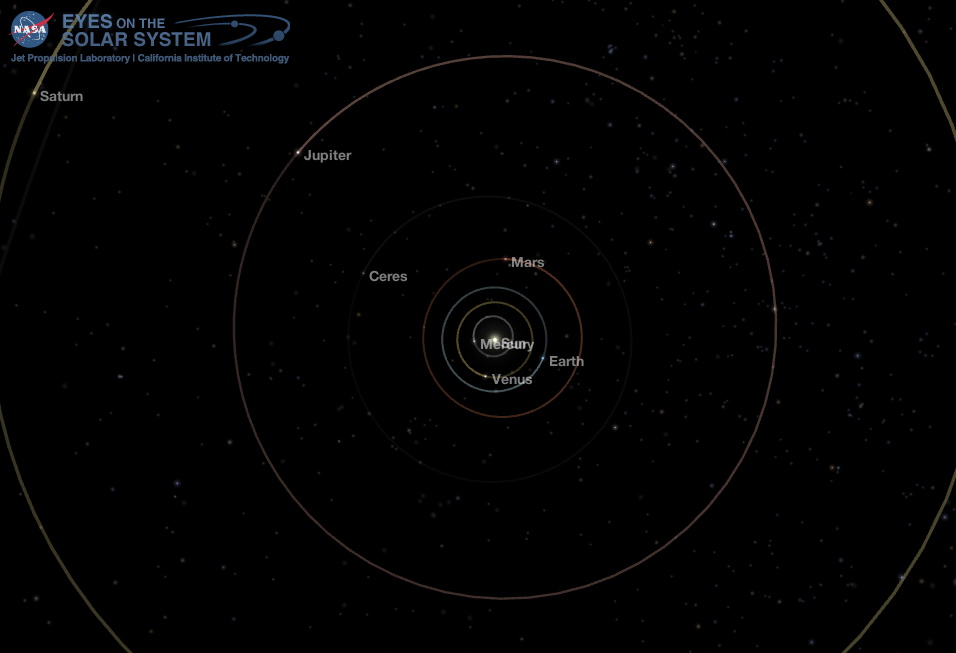 Position of the planets in the middle solar system, 2020-01-21. Credit: NASA Eyes on the Solar System / Bob Trembley.

Position of the planets in the outer solar system – the orbit of transneptunian object (174567) Varda-Ilmarë is highlighted: 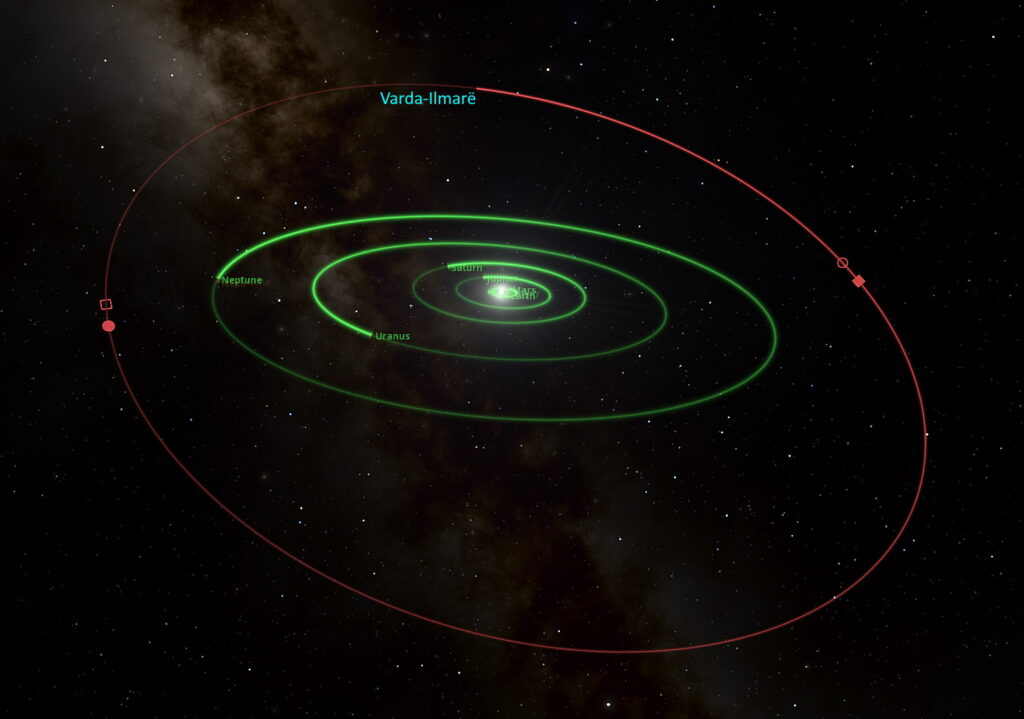 174567 Varda (provisional designation 2003 MW12) is a binary trans-Neptunian object of the resonant hot classical population of the Kuiper belt, located in the outermost region of the Solar System. Its moon, Ilmarë, was discovered in 2009.

Brown estimates that, with an absolute magnitude of 3.5 and a calculated diameter of approximately 700–800 kilometers (430–500 miles), it is likely a dwarf planet. However, Grundy et al. argue that objects such as Varda, in the size range of 400–1000 km, with albedos less than ≈0.2 and densities of ≈1.2 g/cm3 or less, have likely never compressed into fully solid bodies, let alone differentiated, and so are highly unlikely to be dwarf planets.

Varda has at least one satellite, Ilmarë (or Varda I), which was discovered in 2009. It is estimated to be about 350 km in diameter (about 50% that of its primary), constituting 8% of the system mass, or 2×1019 kg, assuming its density and albedo the same as that of Varda.

The Varda–Ilmarë system is tightly bound, with a semimajor axis of 4809±39 km (about 12 Varda radii) and an orbital period of 5.75 days. – Wikipedia 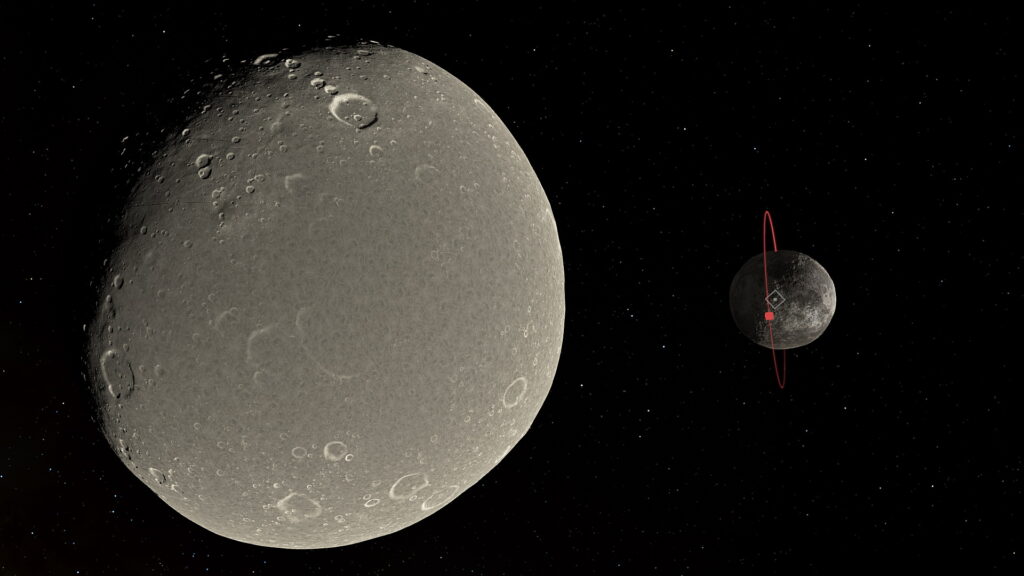 174567 Varda seen from above Ilmarë – the system’s barycenter is the gray diamond, and the orbit of Varda around that barycenter is shown in red. Credit: SpaceEngine / Bob Trembley.

Test complete! Today, @SpaceX completed its In-Flight Abort Test designed to show the #CrewDragon spacecraft’s capability to safely separate from the rocket in the unlikely event of an inflight emergency: https://t.co/j7v2y8svOk pic.twitter.com/VbKh9E2BAQ

On Tuesday, Jan 21, I’ll fly closer to site Nightingale than ever before.
Time to start preparing for #TAG2020
Let’s do this ? pic.twitter.com/ZyjBIyeUsG

At 1:33pm EST, @Astro_Jessica and @Astro_Christina concluded today's spacewalk. After working 6 hours and 58 minutes the two successfully completed the battery upgrade for one channel on one pair of the station’s solar arrays. #AskNASA | Read more… https://t.co/GQfO9zyIGP pic.twitter.com/e3mHSeM8l3

The final speaker of the #AAS235 @NASA_TESS splinter session is Eliza Kempton. She highlighted how many of the exoplanets being discovered by TESS are prime targets for @NASAWebb – JWST can be used to reveal the properties of the atmospheres of exoplanets! pic.twitter.com/e3r199OeWn

ESA/Hubble #Flashback: Within this galaxy, NGC 4993, Hubble discovered the first visual counterpart of a gravitational wave event — the merger of two neutron stars.

LIVE: NASA and @NOAA climate experts discuss the annual global temperatures analysis for 2019 in a teleconference: https://t.co/PWJkcuQ2Jt
Earth's global surface temperatures in 2019 were the second warmest since modern recordkeeping began in 1880: https://t.co/ZRrydb1PiR pic.twitter.com/aA4kbtaWJU

Data from the NASA Exoplanet Archive
* Confirmed Planets Discovered by TESS refers to the number planets that have been published in the refereed astronomical literature.
* TESS Project Candidates refers to the total number of transit-like events that appear to