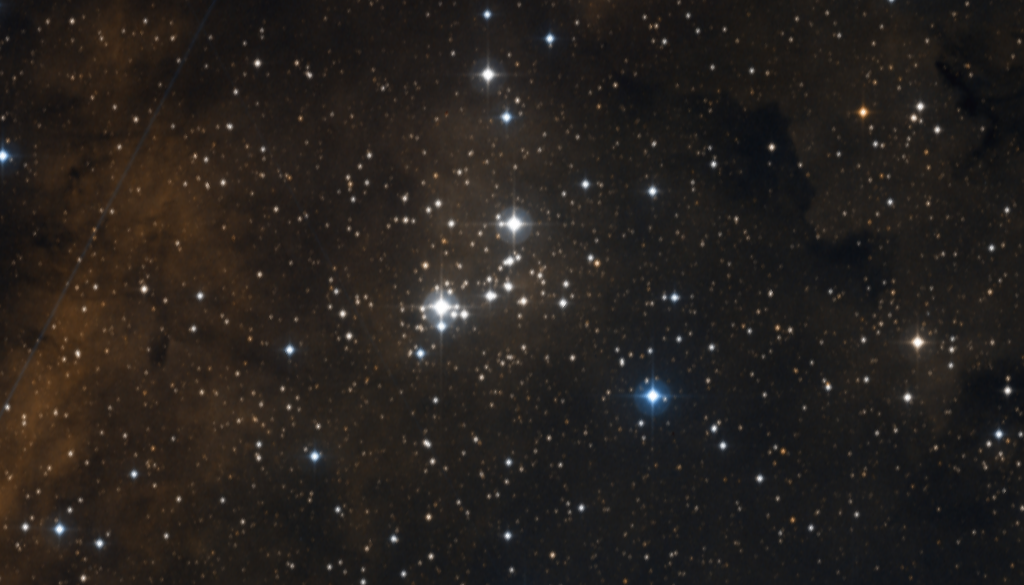 My granddaughter absconded with my father in-law’s magnifying glass, and has discovered the wonders of refraction!

I can’t wait until she uses binoculars for the first time! I’m going to start her out with those because I’ve found that children below the age of 5 typically have trouble using telescopes.

As I’m writing this post, my wife and I ordered a child’s binocular for her! I would encourage everyone to provide binoculars to their children!

Jupiter, Saturn and Mercury appear in the southwestern sky after sunset this week; the Moon appears near Saturn on Jan. 4th. You might be able to spot Venus to the west of Mercury – just after sunset for a couple days.

The Moon appears near Jupiter on Jan. 5th and 6th in the southwestern sky after sunset.

The Moon appears high in the southwestern sky after sunset on Jan. 8th,

The Moon appears high in the southeastern sky with the constellations Orion and Taurus after sunset on Jan. 10th.

Close-up of the Moon and Uranus high in the southeastern sky with sunset on Jan. 10th – Uranus appears a bit over 6° from the Moon.

Every astronomer I know cringes at the phrase "Super Moon"

The Sun has one spot rotating out of view, and a new spot forming and rotating into view in the southern hemisphere. Spaceweather.com says “Big sunspot AR2916 is turning away from Earth as it sets off on a 2-week trip around the farside of the sun. With its exit, the chance of solar flares has plummeted. NOAA forecasters estimate a 10% chance of M-class flares today, dropping to no more than 1% tomorrow.”

The Sun seen in 193 angstroms on January 3rd.

The active region rotating into view in the southern hemisphere is showing a lot of coronal loop activity. There’s some “plasma indirection” (they look like tornadoes) occurring near that developing active region in the southern hemisphere. A long sinuous coronal hole stretches almost from the equator to the Sun’s south pole. The coronal holes at the poles both appear small in size.

The Sun seen in 304 angstroms on January 3rd.

If you have a hydrogen-alpha solar telescope – NOW is the time to get it out and set it up! There are prominences everywhere along the Sun’s limb. The active region rotating out of view in the southern hemisphere is spitting flares angrily!

The SOLARACTIVITY PICTURE OF THE DAY for January 3rd, 2022 is this awesome eruptive prominence capture by Jett Aguilar from the Philippines imaged with a Lunt100mm. Jett comments: “Solar Imaging Session, 31 December 2021I was finally able to finish processing my hydrogen alpha solar imaging done last New Year’s Eve, December 31, 2021. As if welcoming the New Year, the Sun gave a giant eruptive prominence on its Southwestern limb (image with Earth size for comparison). There were also some large prominences on the SE limb, and sunspot group AR2916 gave a nice imaging opportunity as it approaches the Western limb. For my hydrogen alpha imaging, I used my Lunt 100 mm H- alpha telescope with a Skyris 236M camera.”

Have you watched "Don't Look Up" on Netflix?

Researcher from China develops a computer simulation of asteroid collisions

Position of the planets & several spacecraft in the inner solar system on January 4th:

Keep up with the latest NASA STEM happenings by subscribing to the NASA EXPRESS newsletter.

I discovered this little gem while scanning the skies with my 8″ Dobsonian telescope – I return to it frequently.

NGC 6910 is an open cluster in the constellation Cygnus. It was discovered by William Herschel on October 17, 1786. The cluster was also observed by John Herschel on September 18, 1828. It is a poor cluster and with prominent central concentration, with Trumpler class I2p. NGC 6910 is the core cluster of the stellar association Cygnus OB9.

NGC 6910 is located half a degree east-north east of Gamma Cygni, also known as Sadr. It may be physically related with the nebula IC 1318 (also known as the Gamma Cygni Nebula) as it lies at a similar distance, behind the galactic Great Rift. Cygnus OB9 is located within the Orion arm of the Milky Way. Cygnus OB9’s dimensions in the sky are 2.5 degrees by 1.5 degrees, which corresponds at its distance to 175×105 light years across. It includes many OB stars, along with supergiant stars, like the red supergiant RW Cygni. Gamma Cygni is a foreground star, lying at a distance of approximately 1,500 light years. Because it lies behind a number of molecular clouds, the light from NGC 6910 is dimmed by more than one magnitude.- Wikipedia