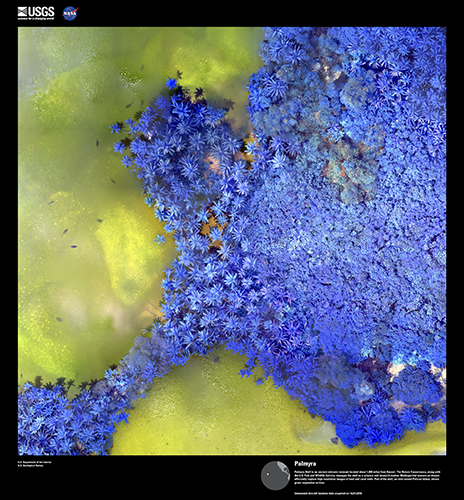 For the images in this week’s “In the Sky” post, I turned light pollution off in Stellarium – these images show a multitude of stars you cannot see from an urban or suburban locations. I remember camping at a VERY dark sky location in Michigan’s Upper Peninsula, and not being able to find any familiar guide stars because there were SO MANY stars! This is one of the best reasons to get away from the city lights, and visit a dark sky location!

Mercury is visible low above the southwestern horizon at sunset – appearing a bit higher above the horizon each evening.

Jupiter and Saturn are also visible low above the southwestern horizon at sunset – appearing a bit lower each evening.

The three planets join to form a triple conjunction on Jan 10th, but it may be a challenge to observe due to the nearness to sunset. 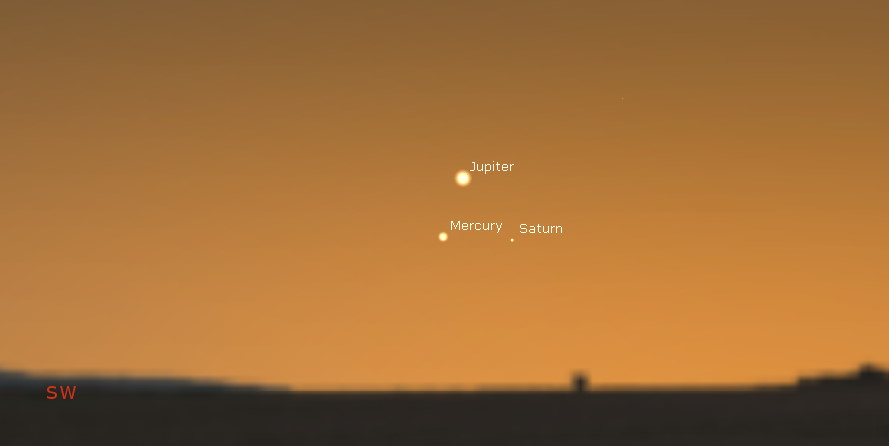 Mars appears high in the southwestern sky after sunset, and through midnight. 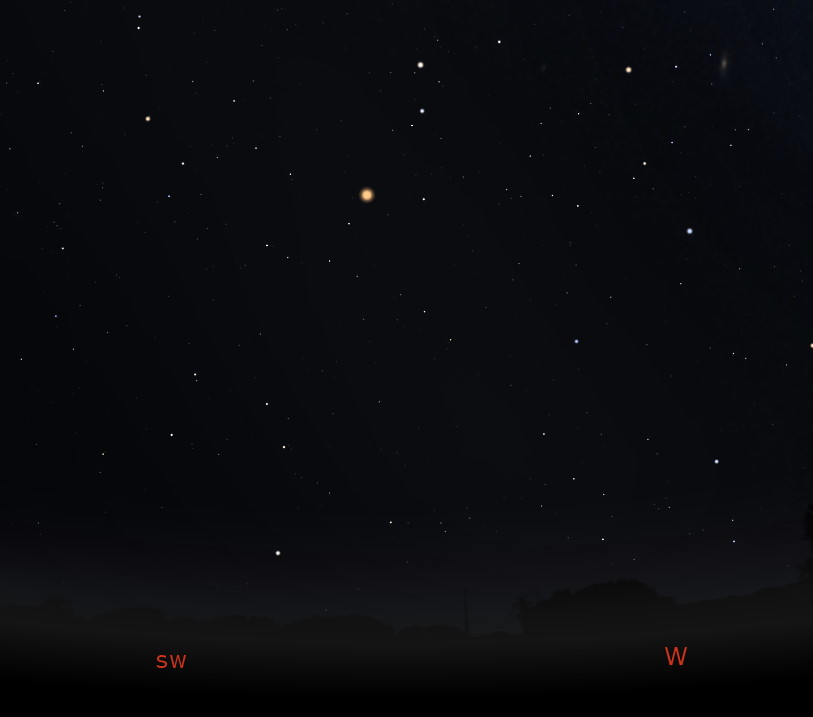 Mars appears high in the southwestern sky after sunset, and through midnight. Credit: Bob Trembley / Stellarium.

Orion, Taurus and Canis Major appear with the Milky Way in the eastern sky after sunset. 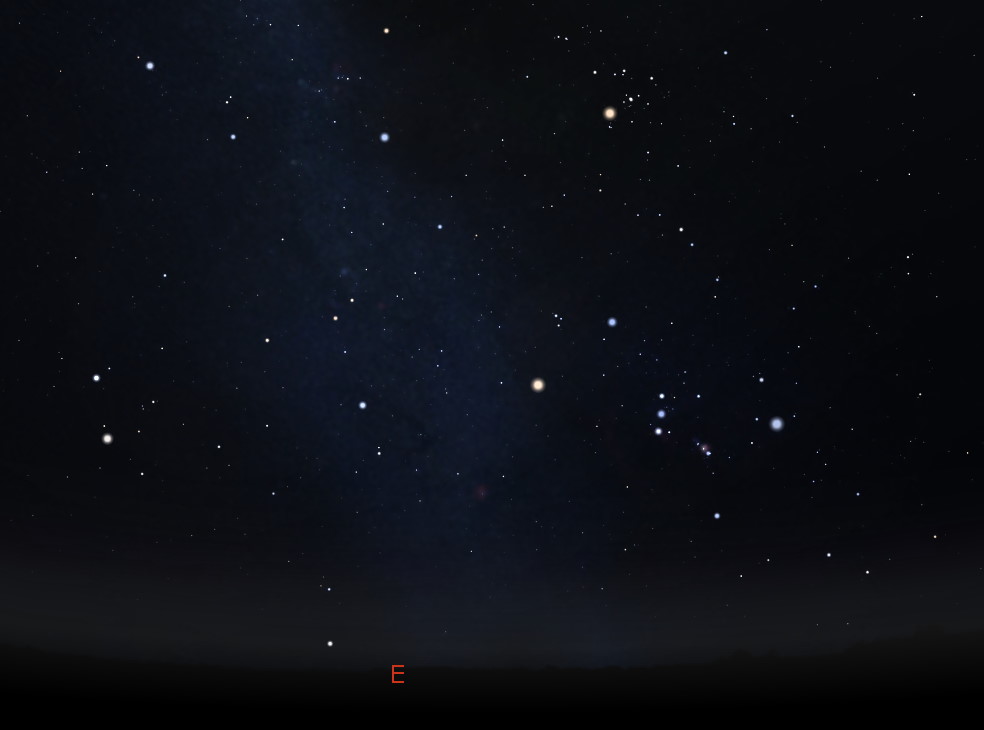 The constellations Orion, Taurus and Canis Major appear with the Milky Way in the eastern sky after sunset. Credit: Bob Trembley / Stellarium.

Cassiopeia and the double cluster appear with the Milky Way in the northwestern sky before midnight. 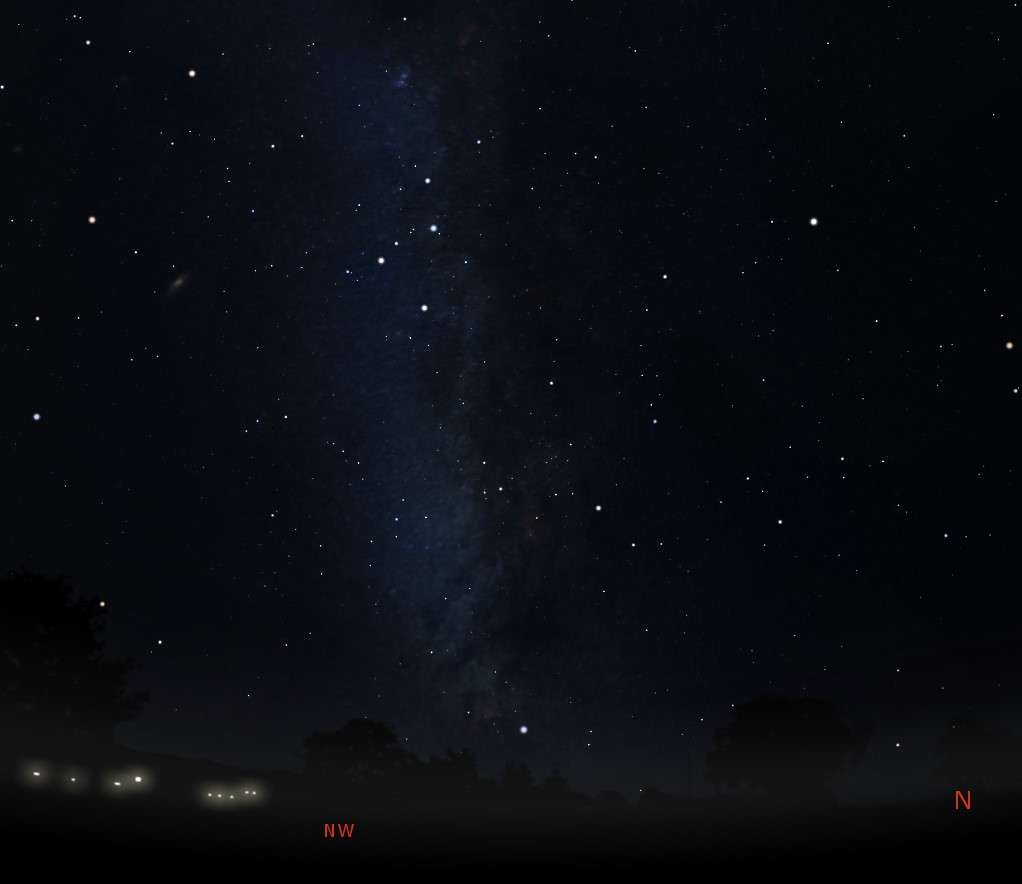 The constellation Cassiopeia, the double cluster and the Andromeda galaxy appear with the Milky Way in the northwestern sky before midnight. Credit: Bob Trembley / Stellarium.

The waning crescent Moon appears in the southeastern sky with the star Spica at 3:00 AM on Jan. 6th. 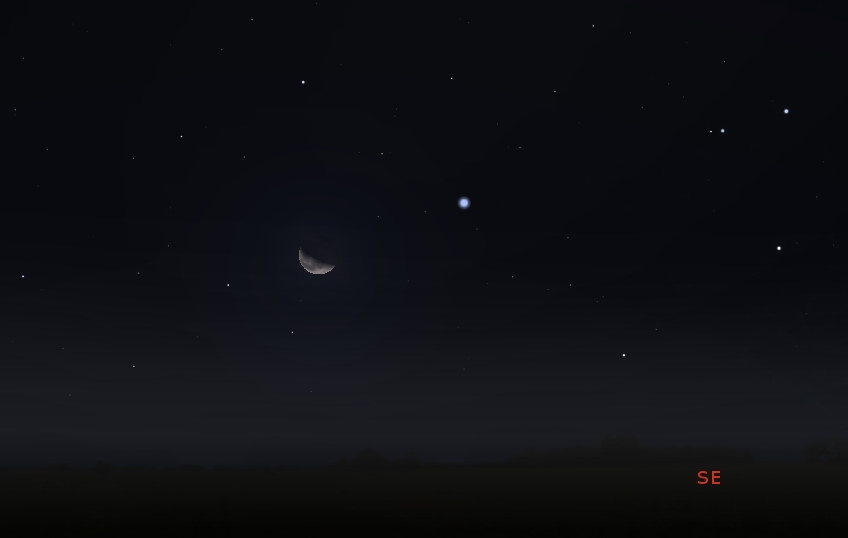 The waning crescent Moon appears in the southeastern sky with the star Spica at 3:00 AM on Jan. 6th. Credit: Bob Trembley / Stellarium.

A very thin waning crescent Moon appears on the southeastern horizon with the star Antares before sunrise on Jan. 10th – there is a good chance of viewing earthshine on the Moon this morning. 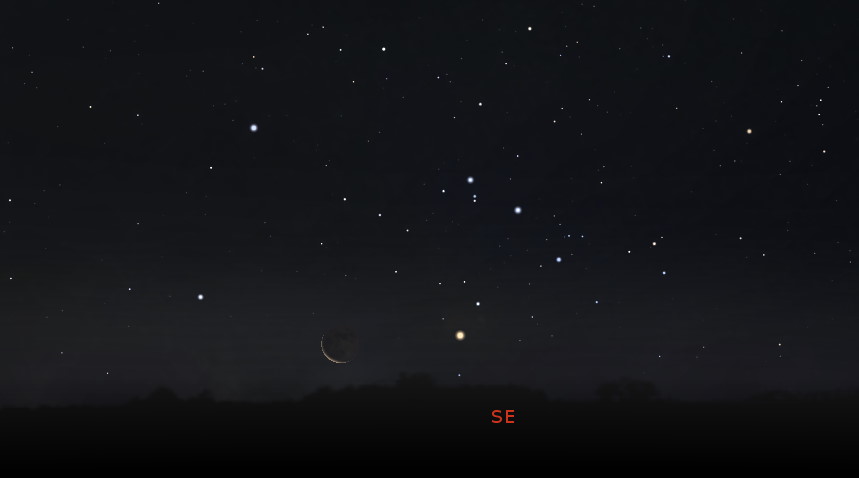 The east-southeastern sky seen from a dark sky site at 1:00 AM from Grytviken, South Georgia and the South Sandwich Islands is stunning! 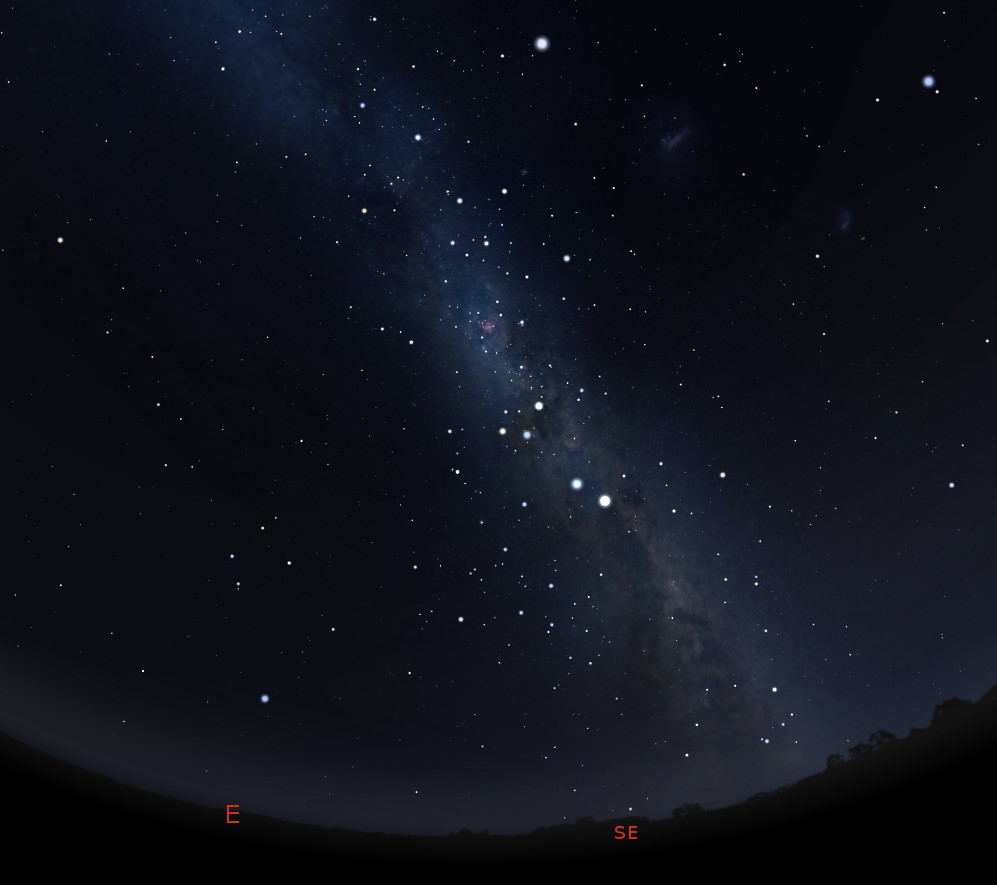 The east-southeastern sky seen from a dark sky location on Grytviken, South Georgia and the South Sandwich Island in the southern hemisphere is stunning! Credit: Bob Trembley / Stellarium.

The Moon will be a waning gibbous – rising after sunset, visible high in the sky after midnight, and visible to the southwest after sunrise.

The third-quarter Moon occurs on Jan 6th – rising around midnight, and visible to the south after sunrise.

After Jan. 6th, the Moon will be a waning crescent – visible low to the east before sunrise – be sure to look for earthshine!

If you click on the Moon image above, or click this link, you will go to NASA’s Moon Phase and Libration, 2021 page – it will show you what the Moon looks like right now. If you click the image on that page, you will download a high-rez TIF image annotated with the names of prominent features – helpful for logging your observations!

We're getting ready to celebrate the 50th anniversary of the launch of #Apollo14 on January 31. For now, enjoy today's #MoonCrushMonday, featuring #Apollo14 astronaut Alan Shepard next to the Modular Equipment Transporter during a surface traverse. pic.twitter.com/B7NIVnEImM

University teams will present their ideas in a @NASA_Technology challenge that could help @NASAArtemis missions explore uncharted areas of the Moon. Administrator @JimBridenstine joins the event on Jan. 6 at 10:30am ET; awards will be announced Jan. 11: https://t.co/oMzC6Tiscs pic.twitter.com/9MUAecvbFE

In 2020, together with the National Space Grant Foundation, @NASA awarded nearly $310,000 to 11 university teams for the development of studies, concepts, and technologies that could help support the agency’s deep space exploration capabilities. https://t.co/VwHW53XD0l

As was stated during last night’s meeting of the Warren Astronomical Society: “The Sun is BORING!” There have been no sunspots for 2 days.

Light prominence activity over the last couple days – one rather large prominence (upper right) has remained active for those couple of days.

A secret behind the workings of sunquakes might be hidden beneath the solar surface. New research found that the acoustic source of this solar seismic activity was around 700 miles below the surface of the Sun — not above the surface as previously thought. https://t.co/pIzJzuYNro pic.twitter.com/1sVRM88kKW

A secret behind the workings of sunquakes — seismic activity on the Sun during solar flares — might be hidden beneath the solar surface. ☀️ 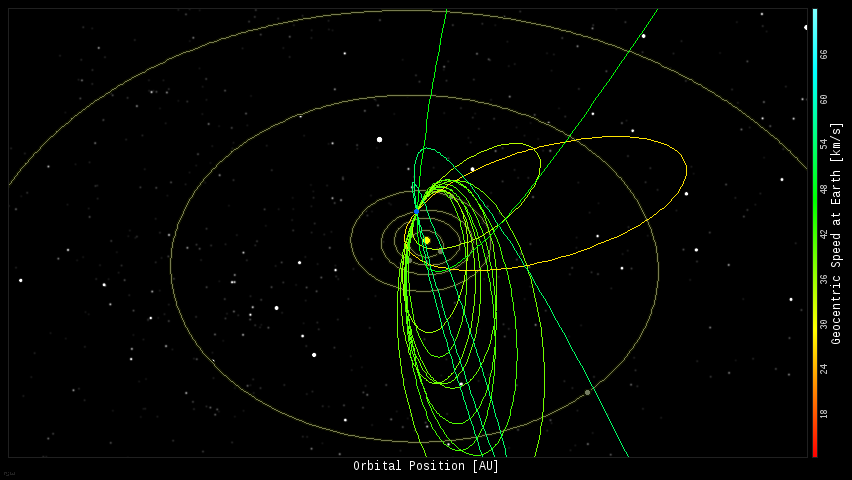 OK… let’s get something straight: UFO’s exist. The term LITERALLY means Unidentified Flying Object. It does NOT mean have to mean ALIENS! The reporter in the video correctly identified it as a “glowing oblong mass” and did not attach any extraterrestrial explanation for whatever it was. 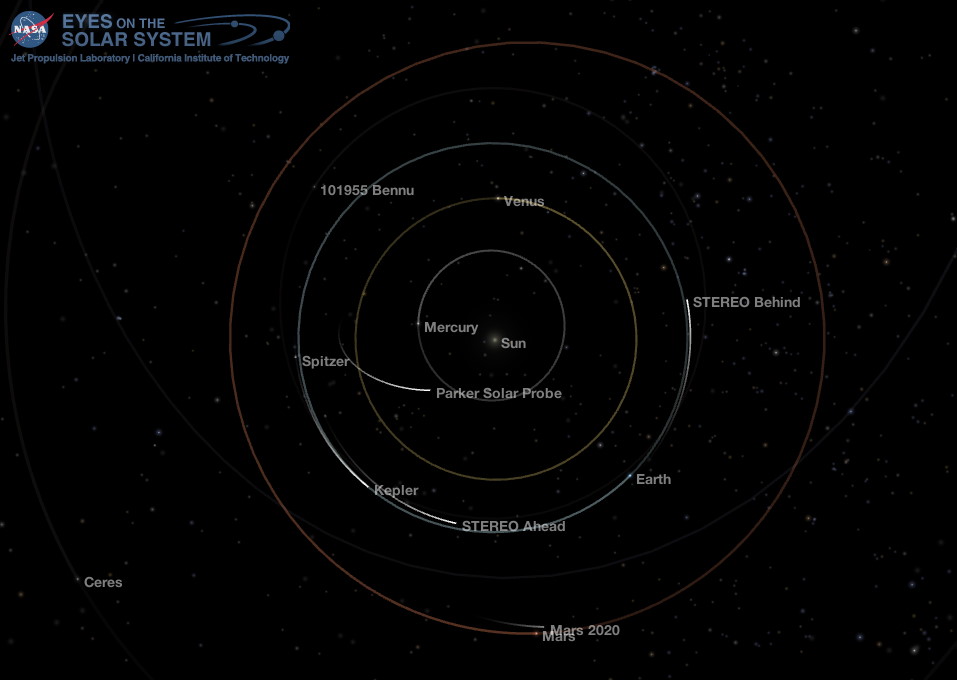 Position of the planets and a couple spacecraft in the inner solar system, 2021-01-05. Credit: Bob Trembley / NASA Eyes on the Solar System.

Position of the planets in the middle solar system – the orbit of dwarf planet Ceres is highlighted. 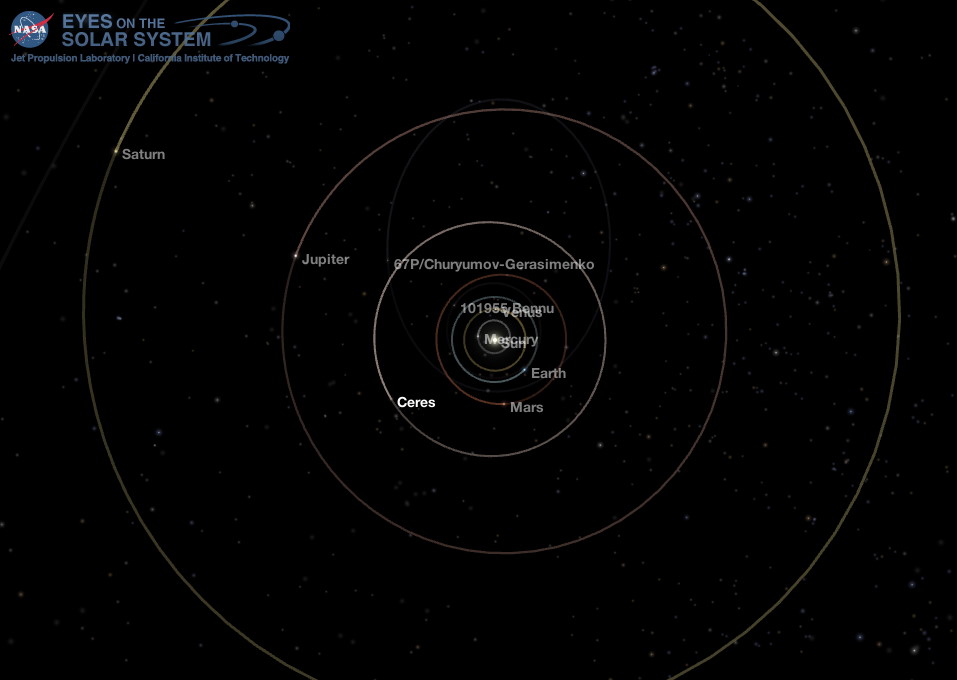 Position of the planets in the middle solar system, 2021-01-05. Credit: Bob Trembley / NASA Eyes on the Solar System.

Position of the planets, dwarf planets and some transneptunian objects in the outer solar system – the orbit of dwarf planet Makemake is highlighted. 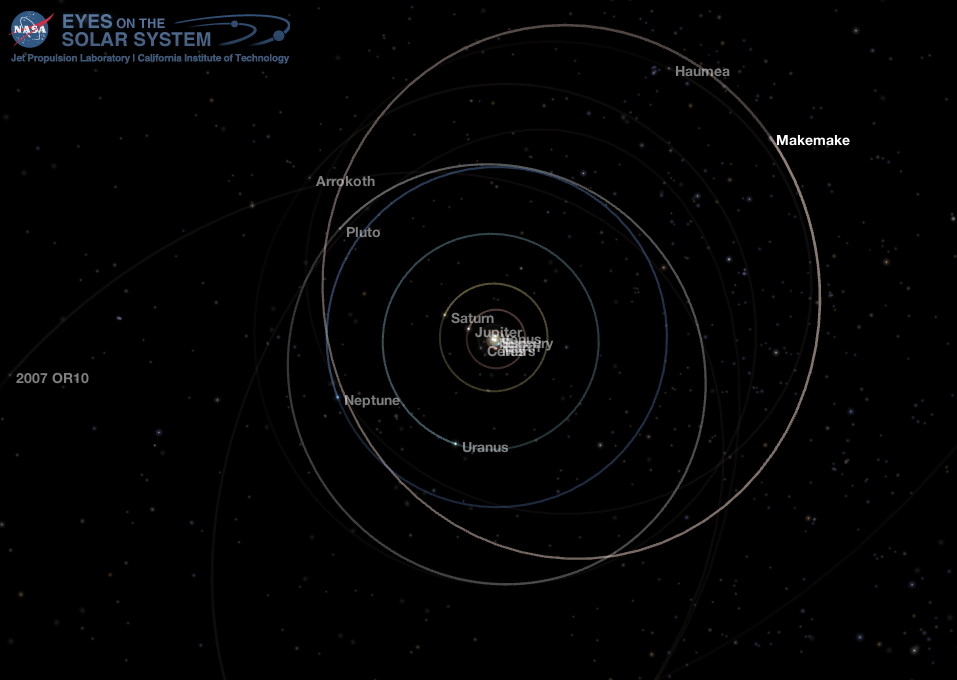 Position of the planets and some transneptunian objects in the outer solar system, 2021-01-05. Credit: Bob Trembley / NASA Eyes on the Solar System.

Start off the new year by looking up! ✨?? In January, Earth reaches its closest approach to the Sun for the year, plus there are chances to spot two elusive planets later in the month. Details and downloads at: https://t.co/BrqV1v3paR pic.twitter.com/9jqXo83nZj

Happy New Year! The station orbits the Earth at 17,500 miles per hour (28,000 kilometers per hour) enabling the crew to see 16 sunrises and sunsets each day. pic.twitter.com/aRvF54KR03

HiPOD: A Taste of Jezero

NASA’s Perseverance rover is set to land in Jezero in February 2021, and this image shows part of the western inlet valley into the crater.

Happy #NationalTriviaDay! ? Our Hubble Trivia series explores the telescope's history, discoveries, and science! Test your Hubble knowledge with our quizzes and short videos.

The raw images from this pass are now available at https://t.co/mGfITRv89Y. This view was processed by Kevin M. Gill. See more at https://t.co/Ql7aCQMUsY #JunoMission pic.twitter.com/ynMuSfqN3r

Palmyra Atoll is an ancient volcanic remnant located about 1,000 miles from Hawaii. The Nature Conservancy, along with the U.S. Fish and Wildlife Service, manages the atoll as a science and research station. Multispectral sensors on drones efficiently capture high-resolution images of land and coral reefs. Part of the atoll, an islet named Pelican Island, shows green vegetation as blue. Credit: USGS.

What do Americans want NASA to do? Make monitoring global climate a top priority. https://t.co/d8IBHDGpTR

A lot happened in 2020, from COVID-19, to #EarthDayAtHome, to the successful launch of the sea level-measuring satellite Sentinel-6 Michael Freilich. It's time for a year in review as we ring in 2021. Here were our top stories: https://t.co/nXTlNuodMa pic.twitter.com/OXfz2VTDrN

KELT-9b is one of the hottest exoplanets we know.

It has a surface temperature of 7,800℉ (4,300℃), hotter than some stars. The heat likely rips molecules in its atmosphere to shreds. #MondayMotivation: It keeps going.https://t.co/vNTq56GZs0 pic.twitter.com/FYNaPj9Lf4

Artist’s rendering of a “hot Jupiter” called KELT-9b, the hottest known exoplanet – so hot, a new paper finds, that even molecules in its atmosphere are torn to shreds. Image credit: NASA/JPL-Caltech.

Our latest video allows your students (and you!) to color @NASA’s Mars helicopter, Ingenuity, alongside a NASA engineer who helped make the actual Mars helicopter!

A gravitational lens is a distribution of matter (such as a cluster of galaxies) between a distant light source and an observer, that is capable of bending the light from the source as the light travels towards the observer. This effect is known as gravitational lensing, and the amount of bending is one of the predictions of Albert Einstein‘s general theory of relativity. – Wikipedia 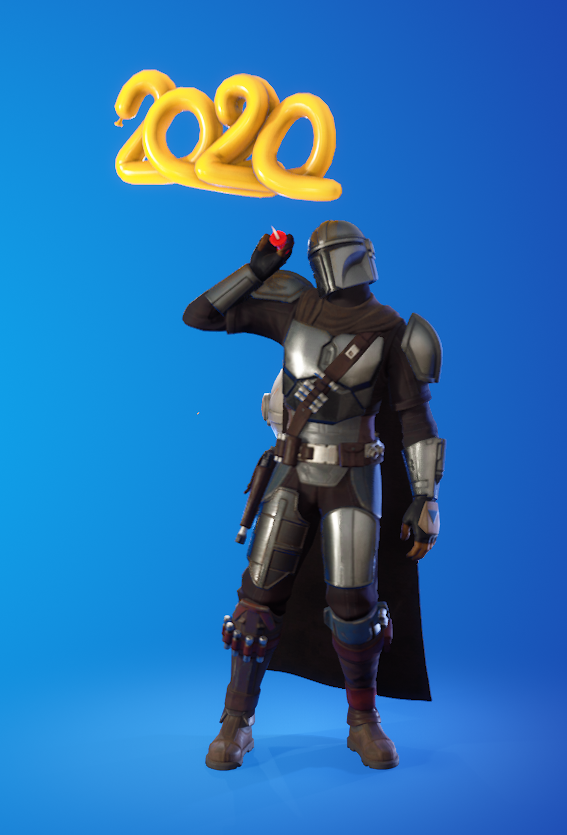