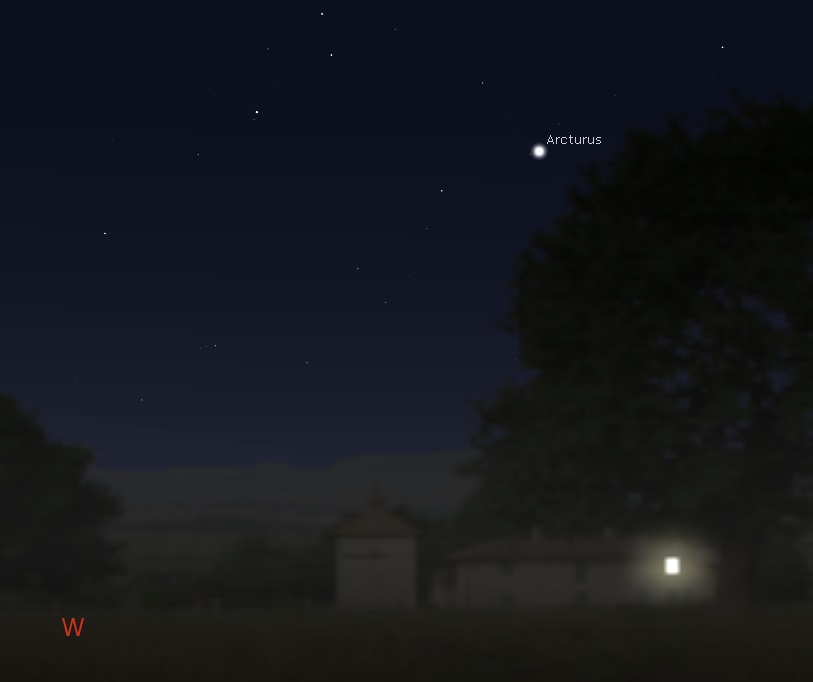 [tweet https://twitter.com/NASA/status/1151122320259452928 width=’300′ align=’right’]I was nine years old when Apollo 11 landed on the Moon in 1969; I was glued to my 13 inch black and white TV the entire mission, and I have been a complete space geek ever since. I have a lecture that I’ve given several times recently covering the space race, NASA Spin-offs, the OSIRIS-REx asteroid sample return mission, and my trip out to Tucson in January.  At the end of my lecture, I mention the #WeTheGeeks:Asteroids Google Hangout hosted by the White House in May of 2013; during this hangout, several influential individuals in various space and tech industries all agreed that two things had a major influence on their lives: the Apollo program, and Star Trek – I couldn’t agree more!

This is the week of the Apollo 11 50th anniversary (#Apollo50th); 60 years ago, going to the Moon or planets was a dream of science fiction. Technology has advanced far beyond that of the era of the Moon landings, and robotic probes have explored all the major bodies in the solar system, taking us into the the next phase of solar system exploration, which will focus on landers and long-term reconnaissance orbiters. Apollo 11 was the first successful sample return mission; the OSIRIS-Rex asteroid sample return mission will be the largest U.S. sample return since the Apollo missions. Seven nations have now orbited the Moon, and four have landed (or crashed) on it;  NASA says it wants to send humans back to the Moon – including the first woman – by 2024. I’m hoping the next 50 years of space exploration will be as exciting for this generation, as the dawn of the space age was for me!

The star Arcturus appears in the western sky around midnight.

The star Arcturus in the western sky after midnight on July 16th. Credit: Stellarium / Bob Trembley.

Jupiter is high and the star Antares is low in the southwestern sky around midnight all week. 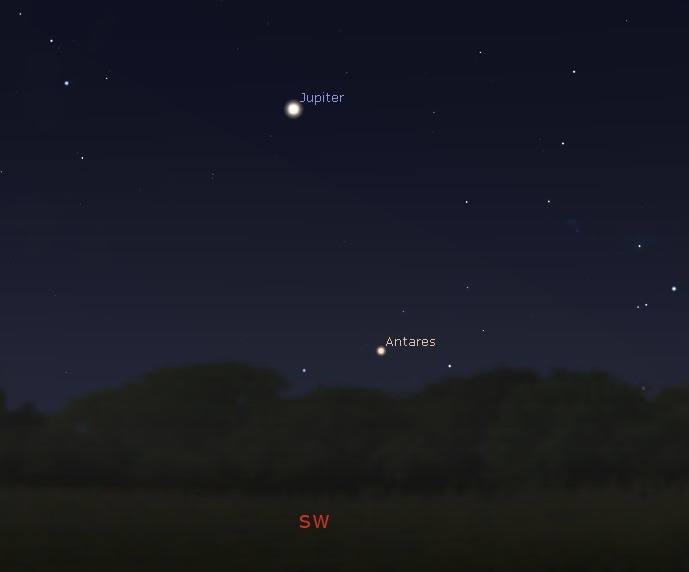 Jupiter and the star Antares in the southwestern sky after midnight on July 16th. Credit: Stellarium / Bob Trembley.

The Moon will appear near Saturn in the Southern sky after sunset on July 16th & 17th.

The Moon appears near Saturn after sunset on July 16 and 17th. Credit: Stellarium / Bob Trembley.

The constellation Ursa Major and the “Big Dipper” asterism appear low in the northern sky around 2:00 AM all week. 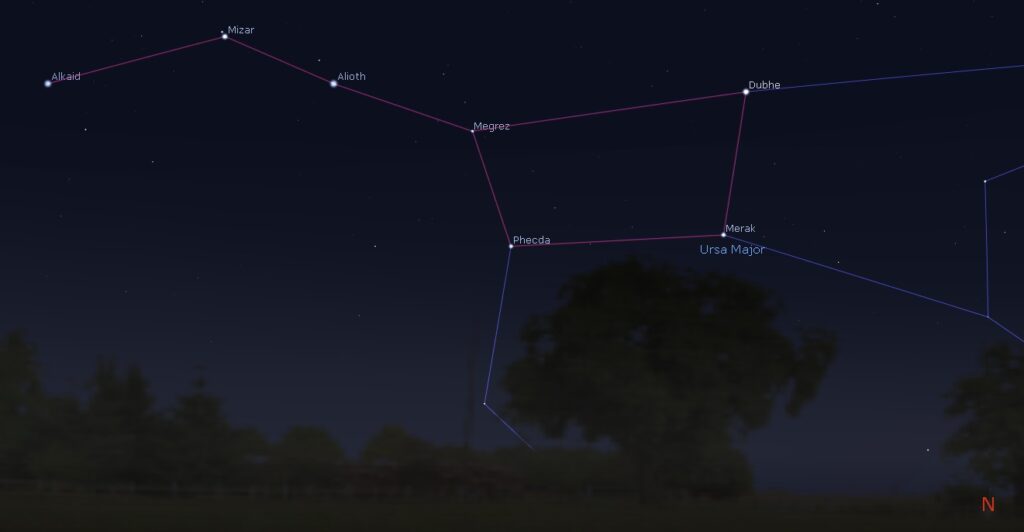 The constellation Ursa Major and the “Big Dipper” asterism in the northern sky around 2:00 AM on July 16th. Credit: Stellarium / Bob Trembley.

Several million young stars reside in a nearby region of frenzied star birth known as 30 Doradus. Located 170,000 light-years away in the heart of the Tarantula Nebula, 30 Doradus is part of the Large Magellanic Cloud, a small, satellite galaxy of our Milky Way. It is the brightest star-forming region visible in a neighboring galaxy, and it is home to the most massive stars ever seen. No known star-forming region inside the Milky Way Galaxy is as large or as prolific as 30 Doradus.

The intense star birth in 30 Doradus may be fueled partly by its close proximity to the Small Magellanic Cloud, a companion to its host galaxy. 30 Doradus churns out stars at a furious pace over millions of years. The Hubble image reveals the stages of star birth, from embryonic stars a few thousand years old and still wrapped in cocoons of dark gas, to behemoths that die young in supernova explosions.

Hubble observations show star clusters of various ages, from about 2 million to 25 million years old. Collectively, the stars comprise a bulk material millions of times the mass of the Sun. 30 Doradus contains one of the most rapidly rotating stars and the fastest moving stars ever observed.

The region’s sparkling centerpiece is a giant, young star cluster named NGC 2070, only 2 million to 3 million years old. Its stellar inhabitants number roughly 500,000. The cluster is a hotbed for young, massive stars. Its dense core, known as R136, is packed with several dozen of the most massive stars known, each about 100 times the mass of the Sun and about 10 times as hot. The cluster also harbors many thousands of smaller stars. For many years, it defied analysis from ground-based observations because of the facilities’ inadequate resolution. It was once even suggested to be a single “superstar,” about 3,000 times the mass of the Sun, until high-resolution images showed that it was actually many smaller stars.

The massive stars are carving deep cavities in the surrounding material by unleashing a torrent of ultraviolet light. This light is winnowing away the enveloping hydrogen gas cloud in which the stars were born. The Hubble image reveals a fantastic landscape of pillars, ridges, and valleys. Besides sculpting the gaseous terrain, the brilliant stars may be triggering a successive generation of offspring. When the ultraviolet radiation hits dense walls of gas, it creates shocks, which may generate a new wave of star birth.

30 Doradus is a “Rosetta Stone” for understanding regions of intense star formation. Many small galaxies exhibit more spectacular star birth, but 30 Doradus is near enough to Earth for its stellar contents and nebular structures to be studied in detail. Astronomers using Hubble can resolve individual stars, which provide important information about the stars’ birth and evolution.

Elena Sabbi of the Space Telescope Science Institute has studied how star formation propagates across the region. Daniel Lennon of the European Space Astronomy Centre in Spain is calculating the directions of motion of massive runaway stars, searching in particular for the origins of massive stars that have been ejected from R136.

Regions such as 30 Doradus are vital contributors to the evolution of galaxies and even life, because massive stars synthesize many of the heavier chemical elements in their nuclear furnaces and final supernova explosions. The explosions disperse the heavy elements to the surrounding interstellar medium, where new stars and planetary systems form from the enriched material. – NASA / Hubblesite.org

The full Moon occurs on July 16th – rising at sunset, visible high in the sky around midnight, and up all night.

After July 16th, the Moon will be a waning gibbous – rising after sunset, visible high in the sky after midnight, and visible to the southwest after sunrise. This is the phase of the Moon when people sometimes ask me “Why can I see the Moon during the day?”

Let's get historic for this week's #MondayMotivation! The #Apollo50th anniversary is almost here. Get inspired by stories about the Moon & the people who explore it with the new NASA Explorers: Apollo podcast series. Download & listen at https://t.co/9347KBgVAf. pic.twitter.com/GxFnoD1ZdQ

Happy #MoonCrushMonday! In honor of the #Apollo50th anniversary this week, here's an image of the landing site taken in 2009 by our Lunar Reconnaissance Orbiter. You can still see the descent stage & Neil Armstrong and @TheRealBuzz's tracks! https://t.co/pSaorqfJVU pic.twitter.com/1qrdsnZYrl

SpaceWeather.com says: “Earth is exiting a stream of solar wind flowing from a hole in the Sun’s atmosphere. The day-long enhancement in solar wind velocity caused by this stream did little to spark geomagnetic activity. Better luck next time? Another stream of solar wind is due to arrive on July 19th”

Some exciting prominence activity on the Sun’s limb the last couple days! 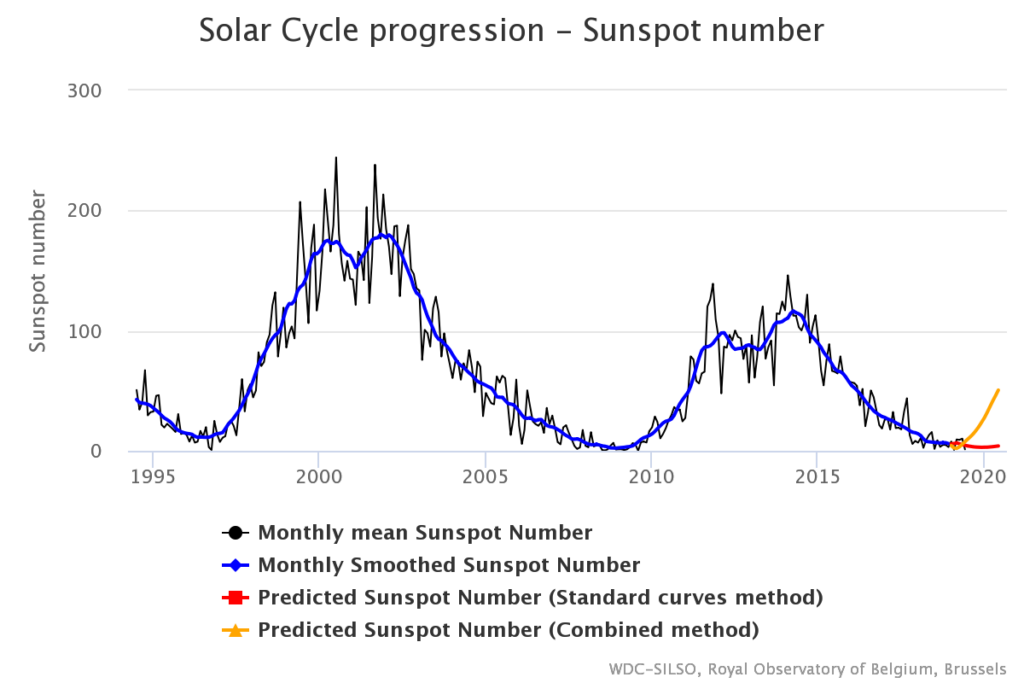 Four years ago today, @NASANewHorizons made its closest approach to Pluto. This approximately true-color image reveals this dynamic world’s atmosphere, as seen backlit by the Sun after New Horizons passed by Pluto. https://t.co/bQ8WFJryGE pic.twitter.com/j69m33Gsjq

I’ve spent months getting thousands of images of Bennu from every possible angle. So now it’s time to show off… which features do you want to see more of, but from a different perspective?

Comment with an image of your favorite feature and I'll show you one from another angle! pic.twitter.com/Gd1YWcCrQ1

Flying a 41-year-old spacecraft takes careful planning and creativity! Engineers have made some changes to ensure that @NASAVoyager 2 can continue to collect data from interstellar space for several years to come: https://t.co/DBkglnkbwp pic.twitter.com/9YHVVotKLF

This is where I went to college, and met my wife; it’s beautiful country, and will always hold a special place in my heart.

CO2, we see you! Our latest carbon dioxide-observing mission onboard @space_station is healthy and just collected its first measurements. https://t.co/fBF4LAmSC5 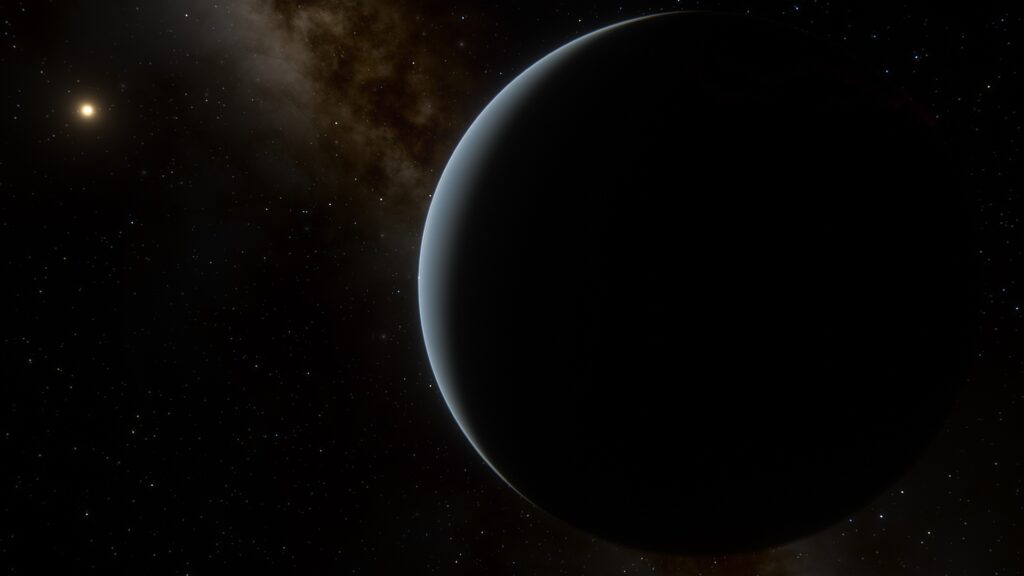 AB Pictoris b is an extrasolar planet or possible brown dwarf orbiting the K-type star AB Pictoris, located around 154 light years away from Earth. The estimated mass of this planet is 13.5 Jupiter masses, but because modeling such young objects is difficult, the true mass of the planet remains unknown. Certain models predict the planets mass to be around 11 Jupiter masses, but others predict it to be as high as 70 Jupiter masses. Using evolutionary models the planet should be around 13 Jupiter masses. As the actual mass is not known and isn’t known if the mass of the objects exceeds the deuterium burning limit, it is unclear whether or not the planet should be identified as a extrasolar planet or a brown dwarf. – Astronomy WiKi | FANDOM.com 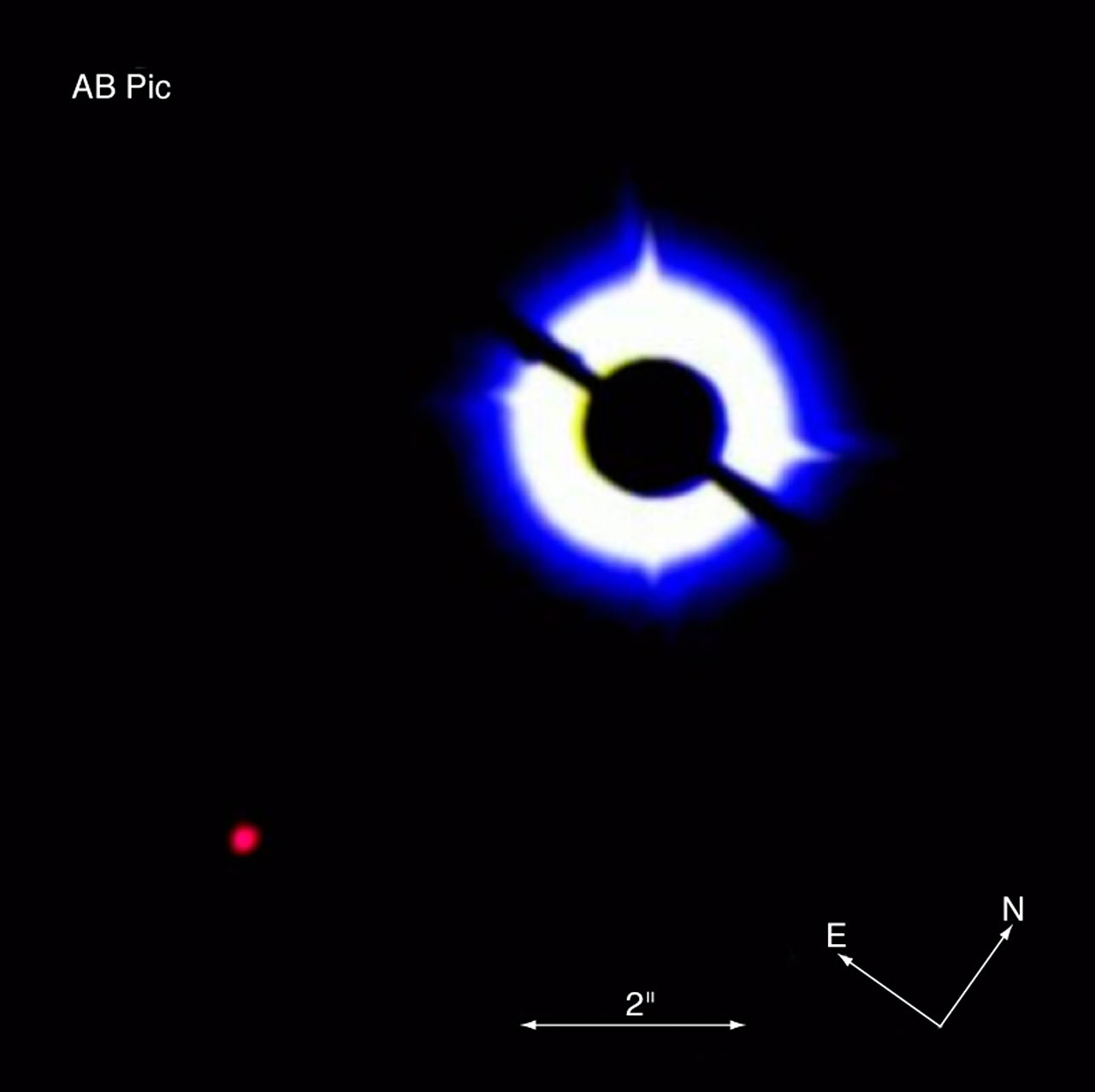 Coronagraphic image of AB Pictoris showing its tiny companion (bottom left). The data was obtained on 16 March 2003 with NACO on the VLT, using a 1.4 arcsec occulting mask on top of AB Pictoris. Credit: ESO

New Measurement of How Fast the Universe is Expanding

A new measurement of how fast the universe is expanding has been made! The revised measurement falls in the center of a hotly debated question in astrophysics that may lead to a new interpretation of the universe's fundamental properties: https://t.co/zgXyrBUx1G pic.twitter.com/wepbkG6AOx

One of the key galaxy types we see in the Universe is the spiral galaxy, as demonstrated in the subject of this Hubble Picture of the Week, NGC 2985, located in the constellation of Ursa Major Credit: @ESA / @Hubble_Space / @NASA /L. Ho https://t.co/4d100ndhKR pic.twitter.com/4Gf34iQ17w

NASA Eyes on the Solar System: an immersive 3D solar system and space mission simulator – free for the PC /MAC. I maintain the unofficial