The Apollo 11 50th anniversary is itself now a part of history – the hashtag #Apollo50th was trending on social media. One of the coolest things I saw on the news was the Washington Monument being used as a projection screen for an animation of the Apollo 11 launch and mission – the celebration drew a veritable horde of attendees to the National Mall.

The star Arcturus continues to be the evening star the western sky after sunset.

The star Arcturus in the western sky around midnight on July 23rd. Credit: Stellarium / Bob Trembley.

Saturn is high and Jupiter is low in the southwestern sky around midnight all week. 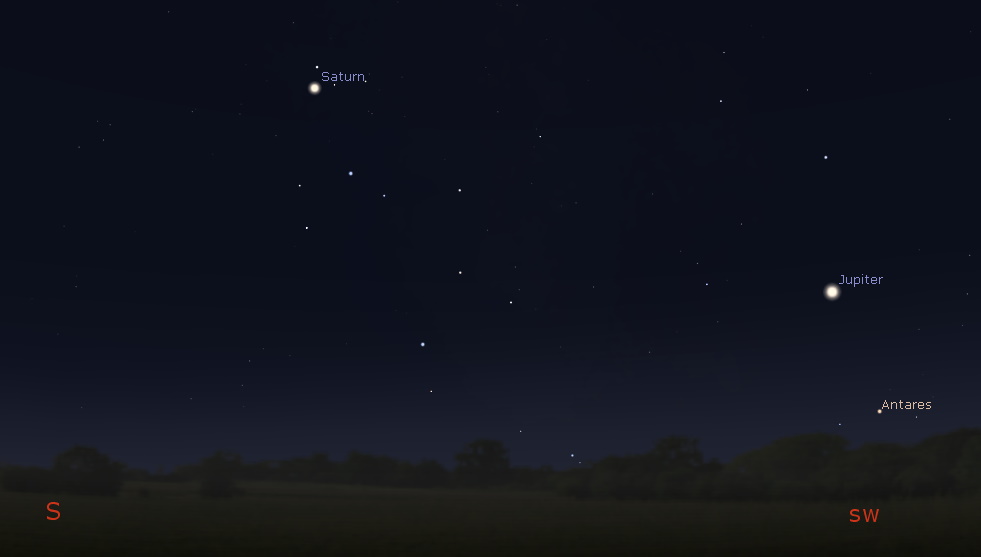 The Moon will appear near the star Aldebaran in the Eastern sky early in the morning on  July 27th & 28th.

The Moon will continue to appear closer to the eastern horizon with each morning; I’ll be watching for it out my kitchen window as I make my morning coffee. I wonder if I’ll be able to see the waning crescent Moon from our new home – wherever that may be… 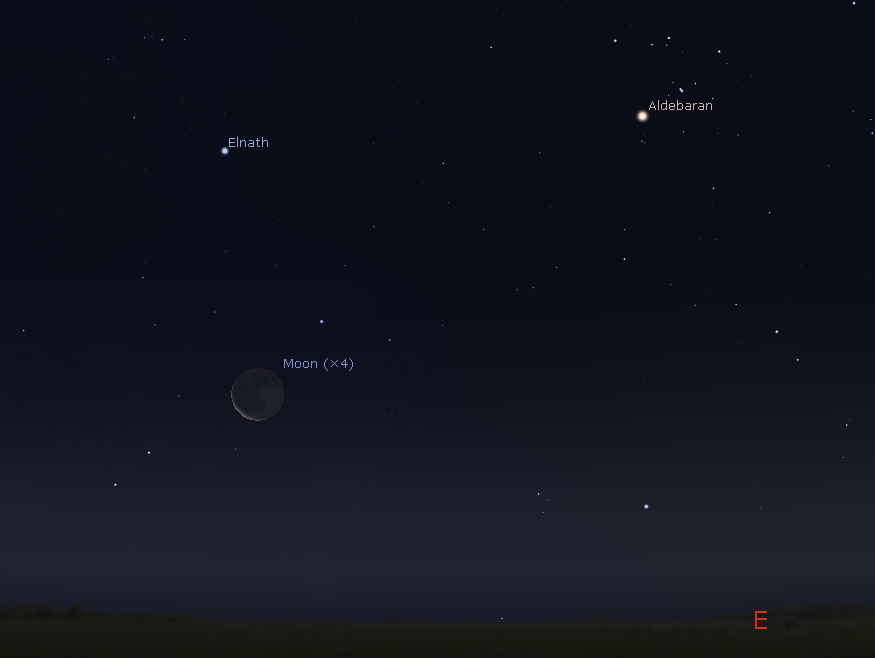 The Moon appears low in the eastern sky early in the morning on July 29th. Credit: Stellarium / Bob Trembley.

The Wild Duck Cluster (also known as Messier 11, or NGC 6705) is an open cluster of stars in the southern constellation of Scutum. It was discovered by Gottfried Kirch in 1681. Charles Messier included it in his catalogue of diffuse objects in 1764. Its name derives from the brighter stars forming a triangle which could resemble a flying flock of ducks (or, from other angles, one swimming duck). The cluster is located just to the east of the Scutum Star Cloud midpoint.

The Wild Duck Cluster is one of the richest and most compact of the known open clusters. It is one of the most massive open clusters known, and it has been extensively studied. Its age has been estimated to about 316 million years. The core radius is 1.23 pc while the tidal radius is 29 pc. Estimates for the cluster mass range from 3,700 M☉ to 11,000 M☉, depending on the method chosen… – Wikipedia

The third-quarter Moon occurs on July 25th, it rises around midnight, and is visible to the south after sunrise.

After July 25th, the Moon will be a waning crescent, visible low to the east before sunrise.

Rik Hill is now posting his astrophotos of the Moon on the Sacred Space Astronomy blog! Rik is a frequent poster on Facebook’s Moon Photography group.

The Sun has a very small spot that was briefly visible but is fading – I can’t spot it on any of the most recent HMI images, but it’s magnetic activity is clearly visible as bright regions on the equator in the two videos below. SpaceWeather.com says “AR2745 poses no threat for strong solar flares. Its magnetic polarity identifies it as a member of old Solar Cycle 24.” Large coronal holes continue to appear at both poles.

A long-lived pillar prominence on one limb, and a couple very photogenic prominences on the Sun’s other limb made for excellent targets for solar observers!

Pan, the innermost of Saturn’s known moons, has a mean radius of 8.8 miles (14.1 kilometers) and orbits 83,000 miles (134,000 kilometers) away from Saturn, within the Encke Gap of Saturn’s A-ring. As it orbits Saturn every 13.8 hours, it acts as a shepherd moon and is responsible for keeping the Encke Gap open. The gap is a 200 mile (325 kilometer) opening in Saturn’s A ring.

Pan creates stripes, called “wakes,” in the ring material on either side of it. Since ring particles closer to Saturn than Pan move faster in their orbits, these particles pass the moon and receive a gravitational “kick” from Pan as they do. This kick causes waves to develop in the gap and also throughout the ring, extending hundreds of miles into the rings. These waves intersect downstream to create the wakes, places where ring material has bunched up in an orderly manner thanks to Pan’s gravitational kick.

I was playing around in SpaceEngine, and these screen shots of Pan were just too good not to share! 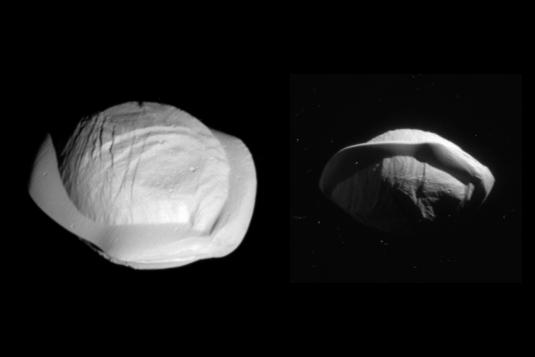 These two images from NASA’s Cassini spacecraft show how the spacecraft’s perspective changed as it passed within 15,300 miles (24,600 kilometers) of Saturn’s moon Pan on March 7, 2017. This was Cassini’s closest-ever encounter with Pan, improving the level of detail seen on the little moon by a factor of eight over previous observations. Image Credit: NASA/JPL-Caltech/Space Science Institute

By request! Here’s a different perspective of that crater within a crater in Bennu’s south. It was taken while in a terminator orbit… you can see the line of dawn on the left. The shadows here provide a good sense of the larger crater’s depth and size.https://t.co/k1kcdfqxBx pic.twitter.com/7LrBeUetpe

Scientists from UA's Lunar & Planetary Laboratory (my home institution) have been pioneering new image processing techniques since they mapped the moon for the Apollo program. Today, @UALPL is developing new techniques to globally map Bennu prior to sample collection. #Apollo50th https://t.co/BUnDpfrBY6

India is on Their way to the Moon!

India has launched its Chandrayaan 2 mission to the moon https://t.co/zLnR5leKMy pic.twitter.com/NnXfTe3Mbe

FOOTAGE OF REENTRY FROM TIANGONG-2!!!

Last month's global average concentration of atmospheric carbon dioxide (CO2) was about 412 parts per million (ppm), up about 3 ppm from June 2018. https://t.co/qjYgQZI1Al

CO2, we see you! Our latest carbon dioxide-observing mission onboard @space_station is healthy and just collected its first measurements. https://t.co/fBF4LAmSC5 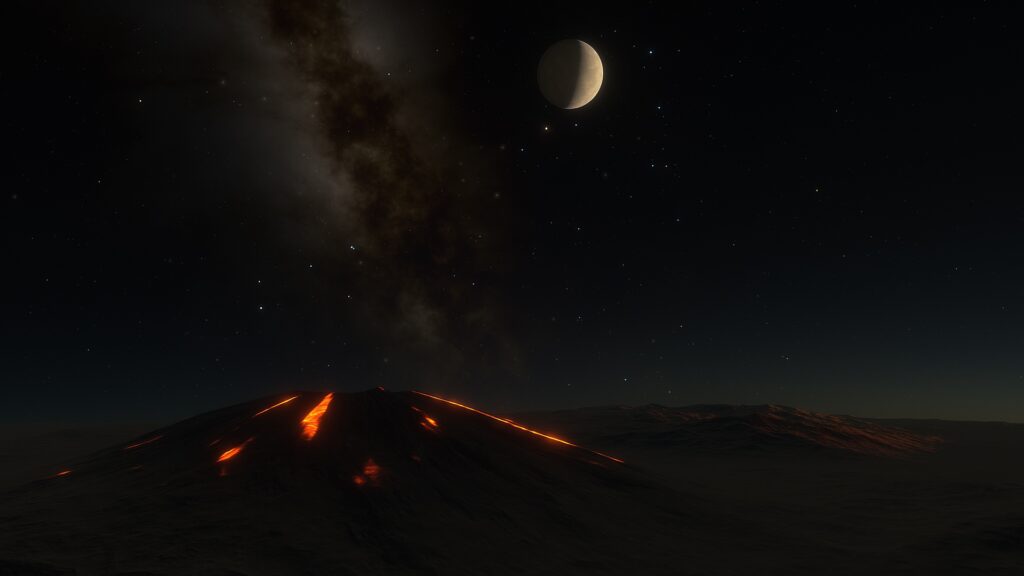 Simulation of a volcano on the smaller planet of a hypothetical double-planet system orbiting the star Menkent. Credit: SpaceEngine / Bob Trembley

A sharply angled perspective can make it seem as if we are craning our necks to see over a barrier into the galaxy's bright centre. Credit: @ESA / @Hubble_Space / @NASA L. Ho https://t.co/WkvCfCBXlS pic.twitter.com/4caXli67Bj