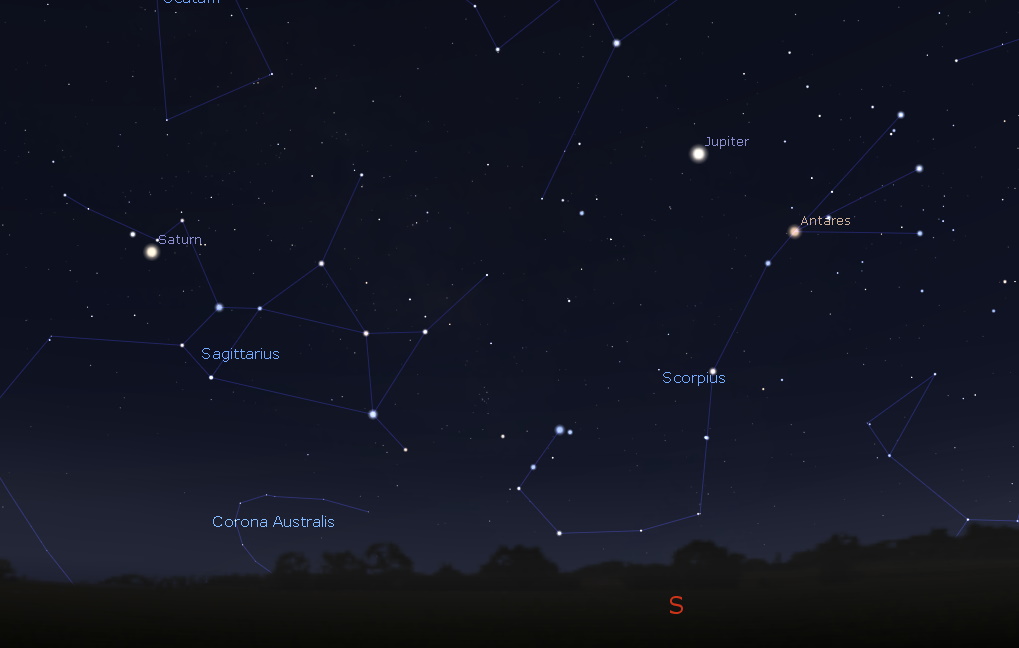 I went outside this morning before sunrise to see the thin waning crescent Moon above the horizon – although it was clear overhead, clouds stubbornly clung to my eastern horizon, obscuring my view… 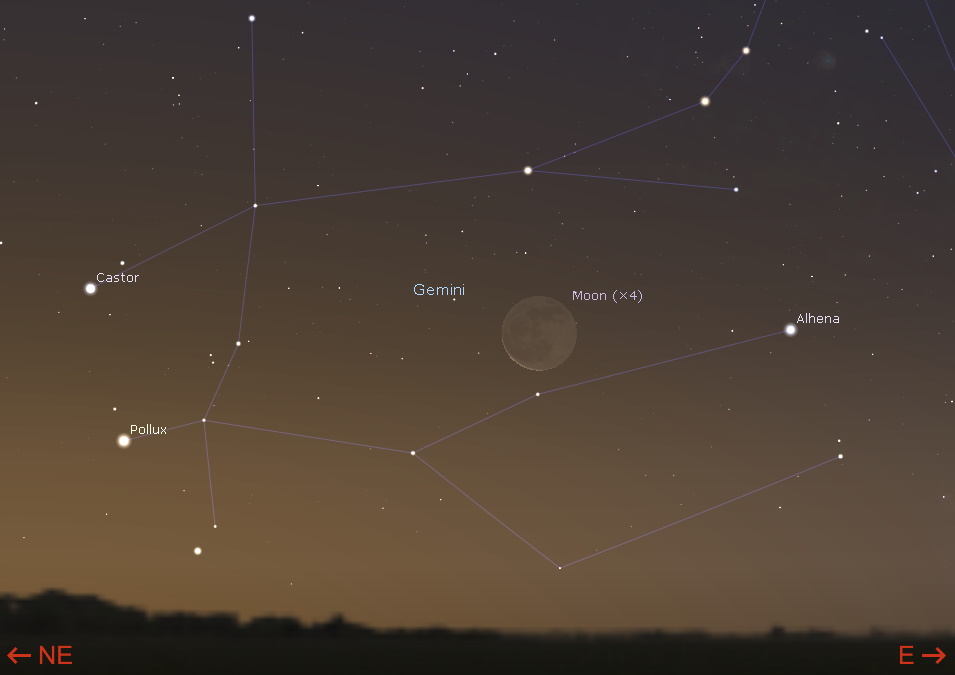 So I found this tweet with an image of the Moon I had wanted to see.

Here's a look at Tuesday's beautiful sunrise in DC along with the waning crescent Moon. Make it a great day! #wusa9 #GetUpDC pic.twitter.com/9Sqrwy6g2d

Saturn and Jupiter high in the southern sky after sunset all week. Credit: Stellarium / Bob Trembley.

The Andromeda galaxy is visible in the east-northeastern sky around midnight. 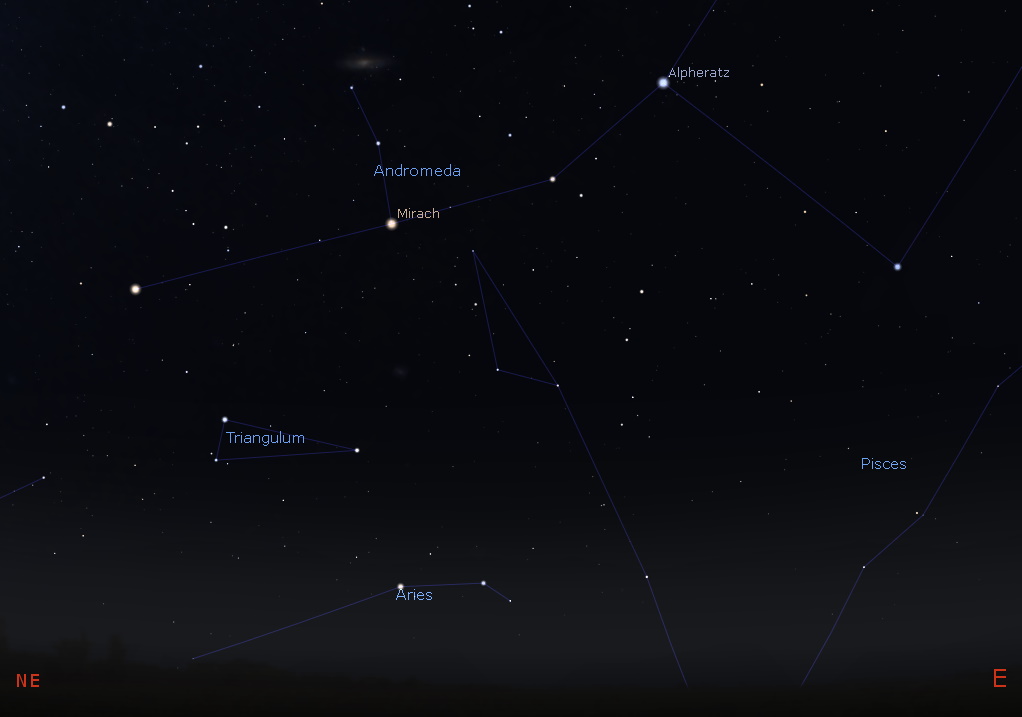 Andromeda in the east-northeastern sky after sunset all week. Credit: Stellarium / Bob Trembley.

You can explore the Andromeda galaxy – and zoom waaaaaaay in here: [Link]

By the beginning of August, Mercury will be visible in the same patch of east-northeastern predawn sky. 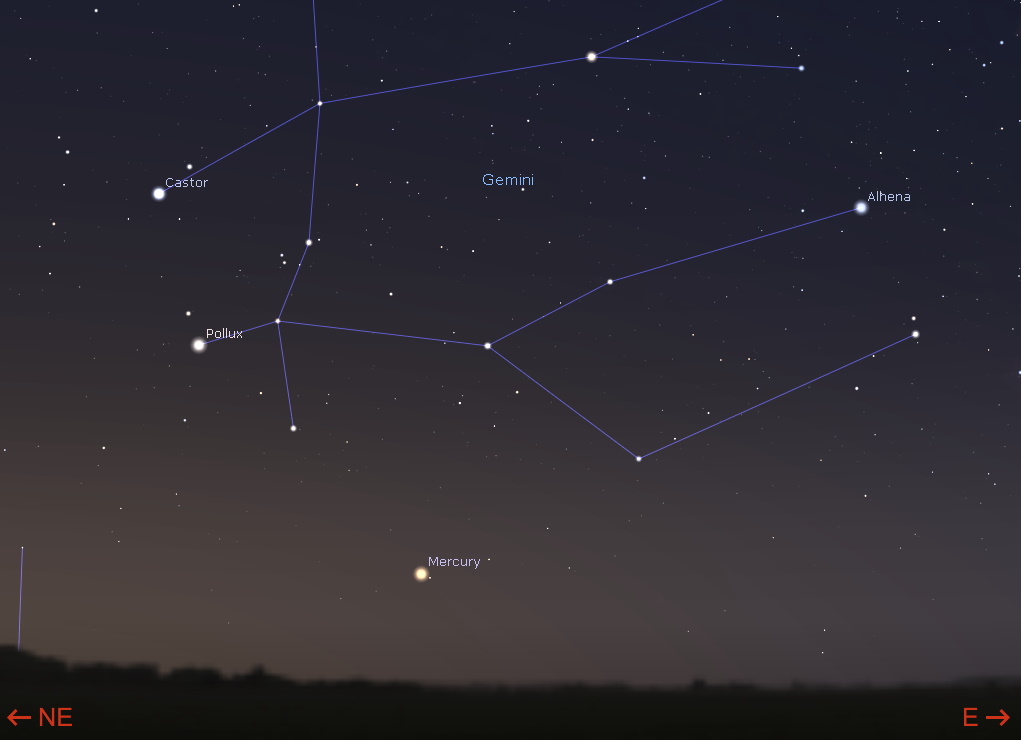 The waxing crescent Moon appears near the star Spica after sunset on August 5th. 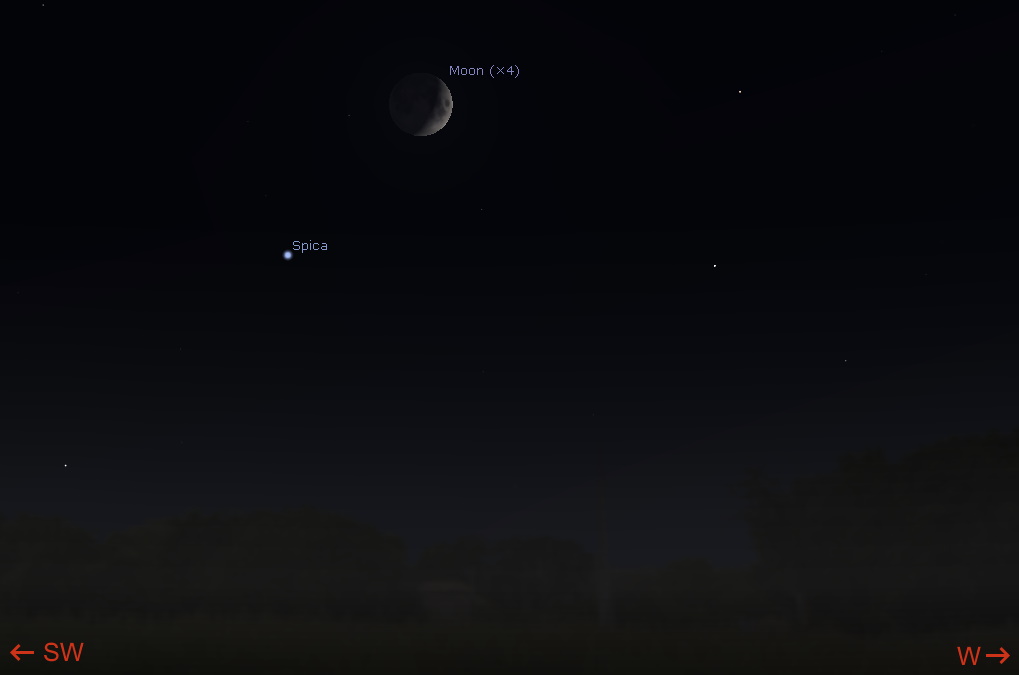 The Moon near the star Spica on August 5th after sunset. Credit: Stellarium / Bob Trembley. 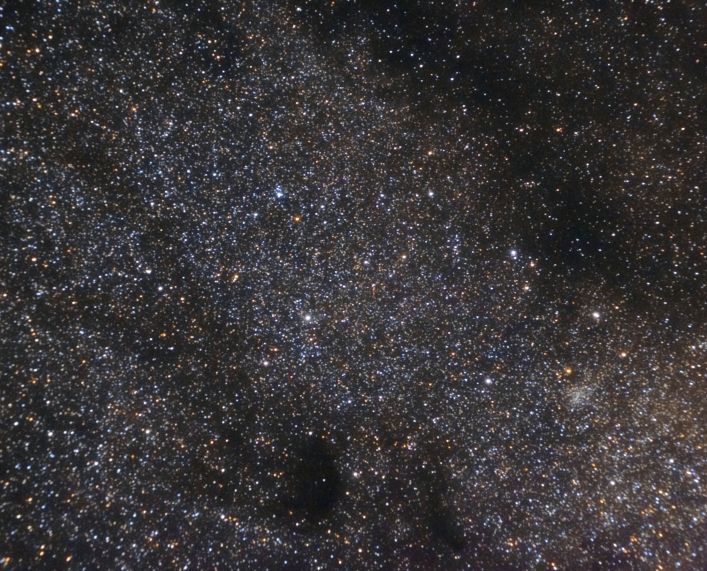 The stars, clusters and other objects comprising M24 are part of the Sagittarius or Sagittarius-Carina arms of the Milky Way galaxy. Messier described M24 as a “large nebulosity containing many stars” and gave its dimensions as being some 1.5° across. Some sources, improperly, identify M24 as the faint cluster NGC 6603. The location of the Sagittarius Star Cloud is near the Omega Nebula (also known as M17) and open cluster Messier 18, north of M24. M24 is one of only three Messier objects that are not deep sky objects.

M24 fills a space of significant volume to a depth of 10,000 to 16,000 light-years. This is the most dense concentration of individual stars visible using binoculars, with around 1,000 stars visible within a single field of view. The star cloud can be seen visible when the Milky Way itself is visible as well. Without the dust and gas that conceals the Milky Way, M24 holds a collection of numerous kinds of stars that are placed along the Milky Way and through the galaxy’s obscuring band of interstellar dust. – Wikipedia

After August 1st, the Moon will be a waxing crescent, v2isible toward the southwest in early evening.

Once completed, our @NASA_SLS will be the world’s most powerful rocket, capable of sending @NASA_Astronauts and supplies to and around the Moon for future #Artemis missions! ? Check out its milestone summer progress, accelerating us to its first launch: https://t.co/mHzVzxCuyX pic.twitter.com/E8yOveEBHv

As @NASA celebrated the 50th anniversary of the first crewed landing on the moon, the agency released new details about how it will procure landers to enable humans to return to the moon in the 2020s: https://t.co/er0MMqkFvn pic.twitter.com/K5XYmkojJ7

The Sun has been spot-free for 7 days. SpaceWeather.com says “Earth is about to be strobed by three streams of solar wind–each flowing from a hole the sun’s atmosphere.” These coronal holes are clearly visible in the video below from NASA’s Solar Dynamics Observatory on July 29th ” The southern coronal hole seems to have reduced in size – the northern hole remains open and huge.

Some fantastic prominence activity over the last couple days gave solar photographers another chance to capture some great photos.

From 22,300 miles in space, NOAA's #GOES16 caught the blue/white flash of a fireball, streaking across the skies just east of #LongIsland, last night. #meteor @amsmeteors pic.twitter.com/Ojjhi3qHQZ

…we all knew this Word of the Week would be back. pic.twitter.com/w1sCtOgrXv

Focusing on any short-term global temperature trend can be misleading. Here’s why it’s important to look at the big picture: https://t.co/iFBMYNGNcn pic.twitter.com/pEkuzG0BAy 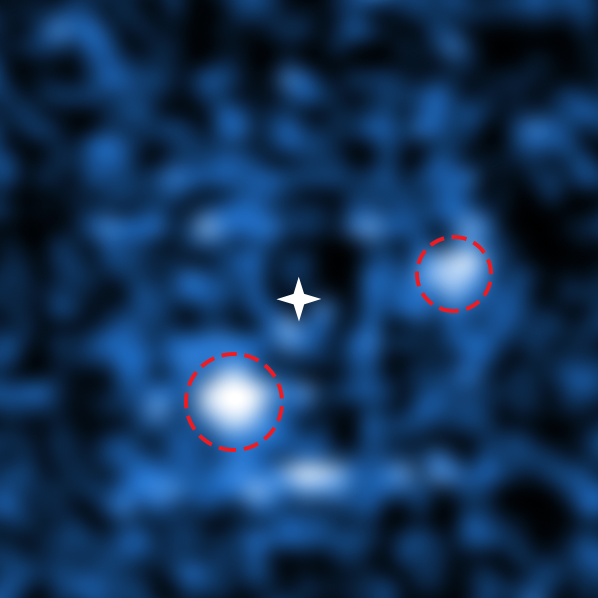 PDS 70 is only the second multi-planet system to be directly imaged. Through a combination of adaptive optics and data processing, astronomers were able to cancel out the light from the central star (marked by a white star) to reveal two orbiting exoplanets. PDS 70 b (lower left) weighs 4 to 17 times as much as Jupiter while PDS 70 c (upper right) weighs 1 to 10 times as much as Jupiter. 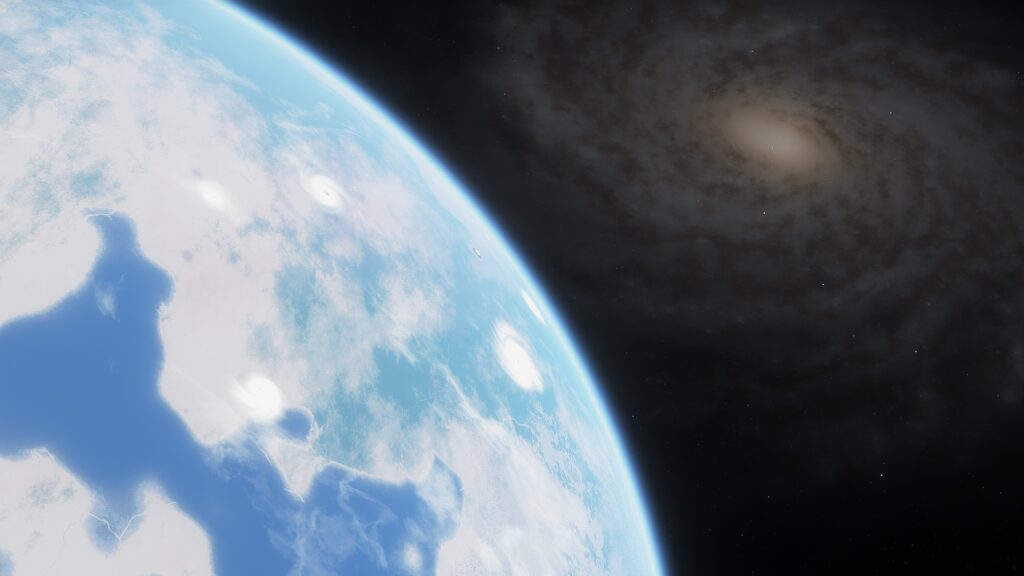 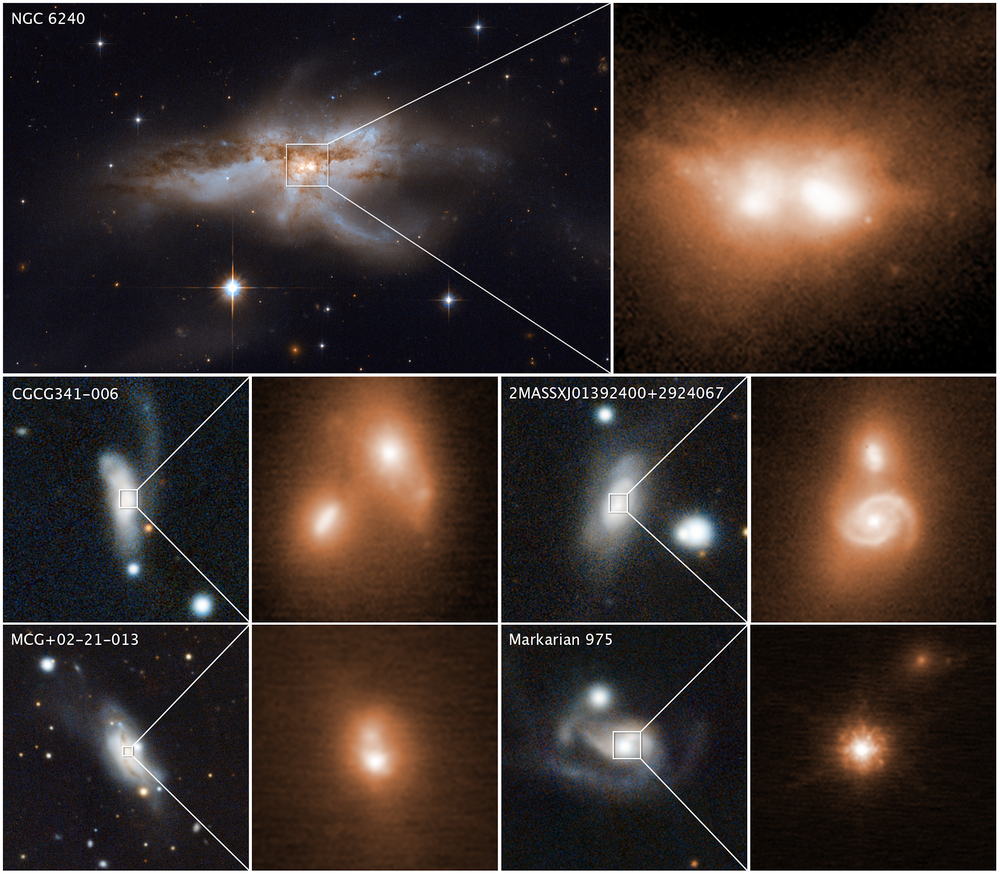 The image at top left, taken by Hubble’s Wide Field Camera 3, shows the merging galaxy NGC 6240. A close-up of the two brilliant cores of this galactic union is shown at top right. This view, taken in infrared light, pierces the dense cloud of dust and gas encasing the two colliding galaxies and uncovers the active cores. The hefty black holes in these cores are growing quickly as they feast on gas kicked up by the galaxy merger. The black holes’ speedy growth occurs during the last 10 million to 20 million years of the merger.

Images of four other colliding galaxies, along with close-up views of their coalescing nuclei in the bright cores, are shown beneath the snapshots of NGC 6240. The images of the bright cores were taken in near-infrared light by the W. M. Keck Observatory in Hawaii, using adaptive optics to sharpen the view.

The reference images (left) of the merging galaxies were taken by the Panoramic Survey Telescope and Rapid Response System (Pan-STARRS).

The two nuclei in the Hubble and Keck Observatory photos are only about 3,000 light-years apart — a near-embrace in cosmic terms. If there are pairs of black holes, they will likely merge within the next 10 million years to form a more massive black hole.

These observations are part of the largest-ever survey of