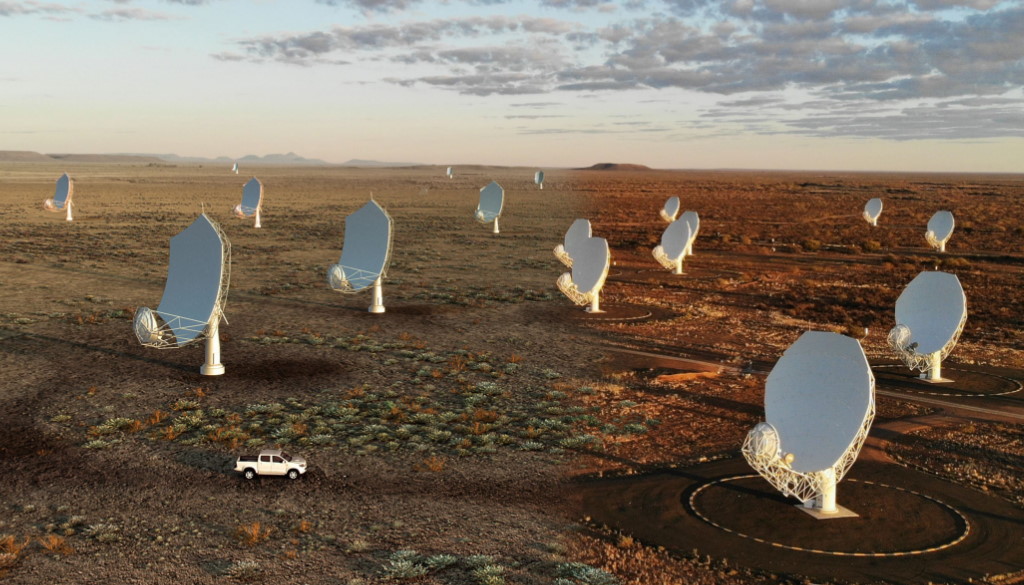 I recently learned about the Square Kilometre Array – an international effort to build “the world’s largest radio telescope.” Sites are being built in both Africa and Australia – the total collecting area of the SKA will be well over one square kilometer!

Cover Image: Composite image of the SKA-Mid telescope in South Africa. The image blends a real photo (on the right) of the existing MeerKAT radio telescope dishes, with an artist’s impression of the future SKA-Mid dishes as they will look when constructed (left). The 15m wide dish telescopes, will provide the SKA with some of its highest resolution imaging capability, working towards the upper range of radio frequencies which the SKA will cover. Credit: SKAO, SARAO

I am completely gobsmacked by the data processing requirements of the SKA Project:

… scientists and engineers are working on a system which will require two supercomputers each 25% more powerful than the best supercomputer in the world in 2019, and network technology that will see data flow at a rate 100,000 times faster than the projected global average broadband speed in 2022.

…there is a desire to reach hundreds of Gigabits per second. This will require network infrastructure will surpass the global internet by a huge factor in terms of the amounts of data being sent globally. Signal processing has never witnessed anything on this scale.

For the last several decades, the field of astronomy has been generating an enormous and an accelerating amount of data – I have to wonder how this compares with other fields of science like biology and chemistry?

Jupiter and Saturn continue to appear in the southeastern predawn sky all week – the Moon appears near Jupiter on June 1st.

Mars and Venus appear above the western horizon after sunset, Mars appears near-ish to the star Pollux in the constellation Gemini. Mercury, which was VERY close to Venus in the sky last week is now well below the horizon.

The star Pollux is classified as a K0 III giant, quite a bit larger than our Sun; it is also the closest giant star to the Sun.

The Moon appears in the southern morning sky after sunrise from June 1-6th, although it may be a bit difficult to see after June 4th.

A very thin waning crescent Moon appears in the eastern predawn sky on June 7th – look for earthshine! You can point to the Moon and tell your friends and family the the planet Uranus is slightly above the Moon, and the dwarf planet Ceres is to the right and closer to the horizon.

The Moon is a Waning Gibbous – rising after sunset, visible high in the sky after midnight, and visible to the southwest after sunrise.

The Third Quarter Moon occurs on June 2nd – rising around midnight, and visible to the south after sunrise

After June 2nd, the Moon will be a Waning Crescent – visible low to the east before sunrise.

Spaceweather.com reports: “AN OFF-TARGET CME MIGHT SIDESWIPE EARTH TODAY: Minor G1-class geomagnetic storms are possible on June 1st when a CME is expected to sideswipe Earth’s magnetic field. The storm cloud was hurled into space on May 28th by departing sunspot AR2824. High-latitude sky watchers should be alert for auroras, especially in the southern hemisphere where autumn darkness favors visibility.”

Intense coronal loop activity with flares around sunspot 2827, smaller but active loops over 2828. The northern coronal hole remains wide open, and there are several patchy coronal holes on the Sun’s face.

Prominences everywhere, again! Sunspot 2824 looks very angry at this frequency – you can see it blowing flares!

WARNING WILL ROBINSON! “A potentially hazardous asteroid is zooming past Earth on Tuesday!”

Whenever I see a headline like this, I head over to the JPL Small Body Database Browser to have a look at the asteroid’s orbit.

Uh huh… just as I thought! The article states that Potentially Hazardous Object 2021 KT1 will pass within 4,600,000 miles – that’s 19.2 Lunar Distances. Many of the objects in the Asteroid Close Encounter table above frequently pass much closer than that, but hey THIS asteroid has that “Potentially Hazardous Asteroid” label attached to it, so it’s more exciting!

I worry more about asteroids that pass within 1 lunar distance – especially the ones passing within the geosynchronous satellite ring! Asteroid 2021 KT1 was discovered on April 23, 2021, and is passing by the Earth just a couple months afterwards – a trend that has been, and will be growing over time.

I just noticed the NAME of this thing… KT1… Yikes!!! K-T referring to the infamous asteroid strike 65 million years ago.

Position of the planets & several spacecraft in the inner solar system on June 1st:

My wife is teaching her astronomy students about exoplanets this week – I sent her this list of websites:

This was reported in a “Michigan Dark Sky” email!

I’ve been to the Keweenaw Mountain Lodge, and it would be a fantastic place to host a star party!! And I happen to know a lot of people in the Keweenaw Peninsula!

When the Cassini mission arrived at Saturn, I was frantic with excitement – just ask my wife! I remember seeing this image from Cassini and feeling utter astonishment!

This view from NASA’s Cassini spacecraft shows a wave structure in Saturn’s rings known as the Janus 2:1 spiral density wave. Resulting from the same process that creates spiral galaxies, spiral density waves in Saturn’s rings are much more tightly wound. In this case, every second wave crest is actually the same spiral arm which has encircled the entire planet multiple times.

The radius from Saturn at which the wave originates (toward lower-right in this image) is 59,796 miles (96,233 kilometers) from the planet. At this location, ring particles orbit Saturn twice for every time the moon Janus orbits once, creating an orbital resonance. The wave propagates outward from the resonance (and away from Saturn), toward upper-left in this view. For reasons researchers do not entirely understand, damping of waves by larger ring structures is very weak at this location, so this wave is seen ringing for hundreds of bright wave crests, unlike density waves in Saturn’s A ring.

The image gives the illusion that the ring plane is tilted away from the camera toward upper-left, but this is not the case. Because of the mechanics of how this kind of wave propagates, the wavelength decreases with distance from the resonance. Thus, the upper-left of the image is just as close to the camera as the lower-right, while the wavelength of the density wave is simply shorter.

This wave is remarkable because Janus, the moon that generates it, is in a strange orbital configuration. Janus and Epimetheus (see PIA12602) share practically the same orbit and trade places every four years. Every time one of those orbit swaps takes place, the ring at this location responds, spawning a new crest in the wave. The distance between any pair of crests corresponds to four years’ worth of the wave propagating downstream from the resonance, which means the wave seen here encodes many decades’ worth of the orbital history of Janus and Epimetheus. According to this interpretation, the part of the wave at the very upper-left of this image corresponds to the positions of Janus and Epimetheus around the time of the Voyager flybys in 1980 and 1981, which is the time at which Janus and Epimetheus were first proven to be two distinct objects (they were first observed in 1966).

Epimetheus also generates waves at this location, but they are swamped by the waves from Janus, since Janus is the larger of the two moons.

This image was taken on June 4, 2017, with the Cassini spacecraft narrow-angle camera. The image was acquired on the sunlit side of the rings from a distance of 47,000 miles (76,000 kilometers) away from the area pictured. The image scale is 1,730 feet (530 meters) per pixel. The phase angle, or sun-ring-spacecraft angle, is 90 degrees.

Annnnnnnnnd this is the first time I’ve actually read about what they are, and now I’m even MORE amazed! MAN I love this stuff!