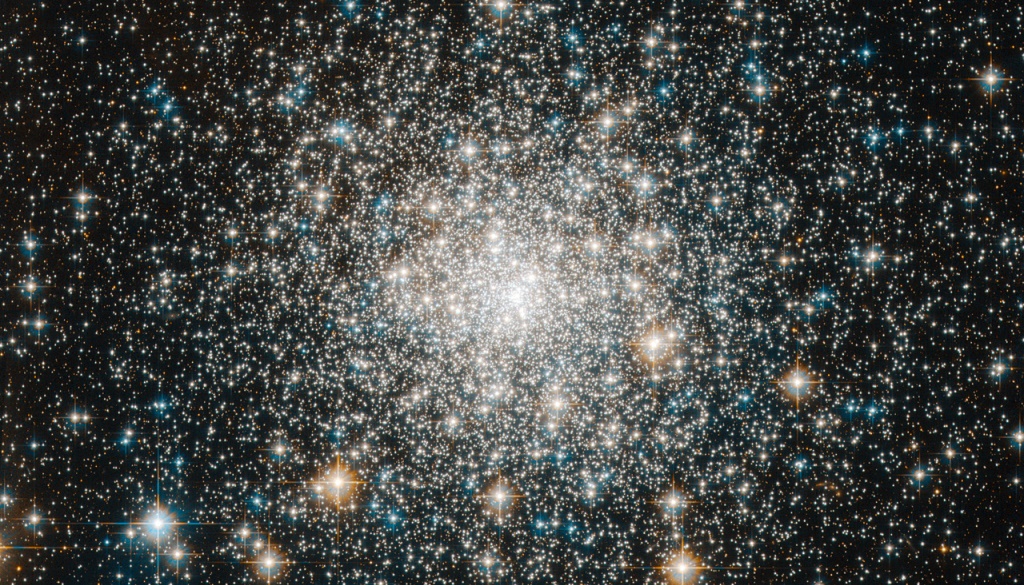 In case you missed my teaser post about the new meteor cameras in the Tucson area:

Venus, Jupiter and Mars appear in the eastern predawn sky all week.

The Moon appears in the middle of the constellation Sagittarius in the southern sky in the early morning hours on June 15th.

The Moon appears near Saturn in the southeastern sky in the early morning hours on June 18th.

The Sun has six named sunspots – up from four last week.

Spaceweather.com says: “Sunspot group AR3032 (sandwiched between 3030 and 3033) has a ‘beta-gamma’ magnetic field that harbors energy for M-class solar flares.” Also: “A CME launched by yesterday’s slow-motion solar flare is expected to pass near Earth on June 15th. Geomagnetic storms are possible if the CME makes contact. NOAA forecasters say minor G1-class storms are likely, with a chance for G2 (moderate) and a slight chance of G3 (strong) storms.”

A gigantic coronal hole is dead in the center of the Sun’s face. Several active regions show bright coronal activity with a moderate about of coronal loops. The small opening at the north pole remains open. A bit of plasma indirection can be seen on the Sun’s limb at the 5:00 o’clock position.

WOW! The active region in the northern hemisphere is crackling with flares! Light prominence activity along the Sun’s limb.

Position of the planets & several spacecraft in the inner solar system on June 14nd:

Concept Comet Interceptor to be stationed at L2

No worries tho – it was designed for that.

Lucy in the sky without a solar panel

Gaia Data Release 3 (Gaia DR3) will be released on 13 June 2022. The data will become available through the Gaia Archive

Almost 8.5 years after its launch with the goal to create the largest and most precise 3-D map of the Milky Way galaxy, the Global Astrometric Interferometer for Astrophysics (Gaia) mission has detected two confirmed transiting exoplanets: Gaia-1 b and Gaia-2 b. Read the discovery paper by Panahi et al. (2022).

Pro Tip: Other Gaia data in the archive include distances and magnitudes in the Planetary Systems and Planetary Systems Composite Parameters tables, and Gaia and HIPPARCOS data are used to calculate masses of known planets, such as bet Pic b. Also, ExoFOP links to Gaia data for each star (currently DR2, and soon DR3).

Copper Harbor! My old stomping grounds! This is where my wife and I saw aurora all the time!

In the above image, the NASA/ESA Hubble Space Telescope has captured the brilliance of the compact centre of Messier 70, a globular cluster. Quarters are always tight in globular clusters, where the mutual hold of gravity binds together hundreds of thousands of stars in a small region of space. Having this many shining stars piled on top of one another from our perspective makes globular clusters a popular target for amateur skywatchers and scientists alike. Messier 70 offers a special case because it has undergone what is known as a core collapse. In these clusters, even more stars squeeze into the object’s core than on average, such that the brightness of the cluster increases steadily towards its centre.

The legions of stars in a globular cluster orbit about a shared centre of gravity. Some stars maintain relatively circular orbits, while others loop out into the cluster’s fringes. As the stars interact with each other over time, lighter stars tend to pick up speed and migrate out toward the cluster’s edges, while the heavier stars slow and congregate in orbits toward the centre. This huddling effect produces the denser, brighter centres characteristic of core-collapsed clusters. About a fifth of the more than 150 globular clusters in the Milky Way have undergone a core collapse.

Although many globular clusters call the galaxy’s edges home, Messier 70 orbits close to the Milky Way’s centre, around 30 000 light-years away from the Solar System. It is remarkable that Messier 70 has held together so well, given the strong gravitational pull of the Milky Way’s hub.

Messier 70 is only about 68 light-years in diameter and can be seen, albeit very faintly, with binoculars in dark skies in the constellation of Sagittarius (The Archer). French astronomer Charles Messier documented the object in 1780 as the seventieth entry in his famous astronomical catalogue.

This picture was obtained with the Wide Field Camera of Hubble’s Advanced Camera for Surveys. The field of view is around 3.3 by 3.3 arcminutes. – ESA/NASA

Messier 19 appears as a fuzzy patch of light in 2-inch binoculars. Amateur telescopes will show a cluster about 6 arc minutes in size visually and 13.5 arc minutes photographically. The cluster’s elliptical shape is evident even in small instruments. A 10-inch telescope, on the other hand, will reveal the cluster’s bright core about 3 by 4 arc minutes in apparent size and a halo occupying a region 5 by 7 arc minutes in size. The best time of year to see the cluster is in the summer months.

Messier 19 contains a number of variable stars, including four Cepheids and RV Tauri type stars, and at least one RR Lyrae type variable with a known pulsation period. The cluster has four confirmed RR Lyrae variables.

Globular cluster M19 and the disk of the Milky Way rising over the horizon of a dark sky site on a hypothetical life-bearing exoplanet – best viewed in a dark room.