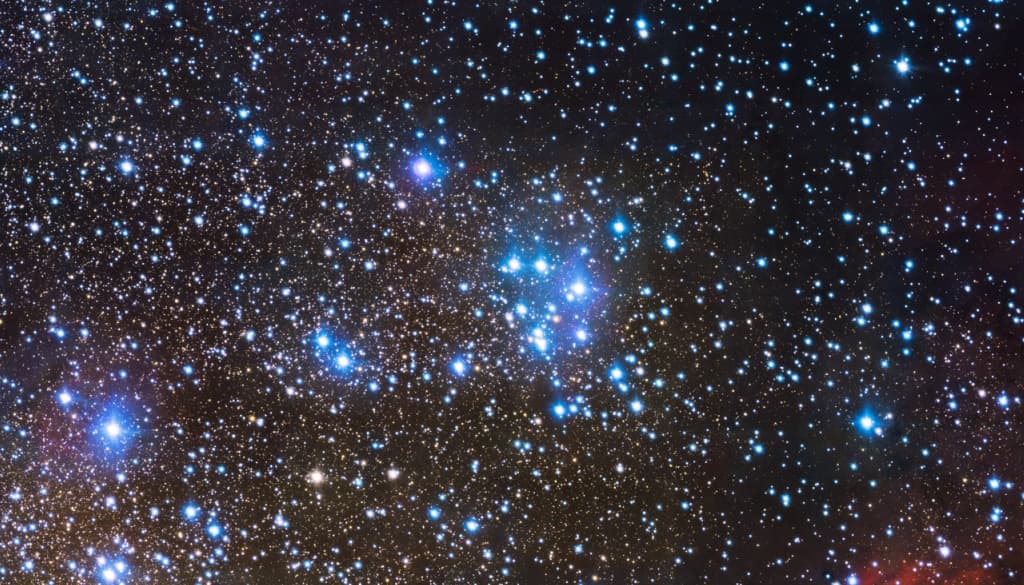 There will be nationwide viewing events for the first images from the James Webb Space Telescope. A few months ago there was a huge push from NASA/JPL’s Solar System Ambassador program to have Ambassadors participate in events this summer. Stay tuned!

I must admit I’m more than a tad excited to see JWST’s first images, but “having to do your visual presentation” right after Sgr A* is gonna be really challenging for them!

Saturn has pulled away so far Venus that I’d have to zoom WAY out in Stellarium to show all four planets in one image, or I could show Saturn’s portion of the sky in a separate image – which I have.

The Waxing Crescent Moon appears near the star Pollux in the constellation Gemini in the northwestern sky after sunset on June 2nd. The ISS makes an appearance too!

From 10:02 PM – 10:04 PM over my location in Clinton Township, Michigan, you should be able to see the ISS bright in the sky! For all sorts of satellite flyovers for your location, head over to Heavens-Above.com.

The Sun has only four named sunspots – down from eight last week.

Spaceweather.com says “Sunspot AR3027 has a reversed magnetic polarity,” which is weird… They also say “Yesterday, a magnetic filament on the sun erupted, hurling a faint CME into space. NOAA forecasters say it could hit Earth’s magnetic field on June 5th or 6th. Even weak CME strikes can cause geomagnetic storms, so there is a chance of minor G1-class storms when the CME arrives.”

BOOM! Something big explodes across the Sun’s face at the beginning of this video! One very small coronal hole is near the center of the Sun’s face. The North pole looks to have a small coronal opening. The active region in the northern hemisphere is flaring like crazy – it looks like it’s boiling!

The BOOM mentioned in the previous video is visible in this one as a large and short-lived filament. There is another filament in the southern hemisphere that remains for the entire length of the video. There are several prominences all along the Sun’s limb.

Launching sounding rockets into the Cusp Aurora… which I’ve never heard of!

Position of the planets & several spacecraft in the inner solar system on June 2nd:

… with Kerbalnaut Jebediah Kerman onboard… at least that’s what we’re told!

Can one ever really “relax” while in orbit?

Complicated spacecraft are made from complicated parts – that all need to work together!

This week’s five new planets include three hot Jupiters and a second planet in the Kepler-1656 system.

The School Year Wrapping Up, But Learning Does Not Have to Stop

Seriously, I learn something new each week writing these posts – I LOVE it!

Image Caption: The small smattering of bright blue stars upper left of centre in this huge 615 megapixel ESO image is the perfect cosmic laboratory in which to study the life and death of stars. Known as Messier 18 this open star cluster contains stars that formed together from the same massive cloud of gas and dust. This image was captured by the OmegaCAM camera attached to the VLT Survey Telescope (VST) located at ESO’s Paranal Observatory in Chile.

Messier 18 (M18) is a relatively dim open star cluster located in the constellation Sagittarius. The cluster lies at an approximate distance of 4,900 light years, or 1,500 parsecs, from Earth and has an apparent magnitude of 7.5. Its designation in the New General Catalogue is NGC 6613.

Messier 18 may form a binary star cluster with the nearby NGC 6618, embedded within Messier 17 (the Omega Nebula). Scientists have speculated that the proximity of the two clusters may suggest that they had formed together. – messier-objects.com

Messier 18 is one of Charles Messier’s original discoveries. Messier included the cluster in his catalogue of comet-like objects on June 3, 1764 and described it as a “cluster of small stars, a little below above nebula, No. 17, surrounded by slight nebulosity, this cluster is less obvious than the preceding, No. 16: with an ordinary telescope of 3.5-foot [FL], this cluster appears like a nebula; but with a good telescope one sees nothing but stars. (diam. 5′)” – messier-objects.com

The cluster is estimated to be about 32 million years old, which makes it quite young. The hottest stars have the spectral classification B3. Most of the stars in M18 are quite small, but the cluster is also home to several bright blue, yellow and orange stars. It also contains a small amount of dust and nebulosity.

Messier 18 is located between two other prominent Messier objects, Messier 17 (the Omega Nebula) and Messier 24 (the Sagittarius Star Cloud). It can be difficult to find because it is quite small, distant and invisible to the naked eye. – messier-objects.com

Yes, But How Many Stars?

Messier 18 is about 10 times more distant than the better known Messier 45 (the Pleiades), located in Taurus. M18 is probably the hardest of the 11 Messier objects located in this area of the sky to find. The cluster lies against the backdrop of the galactic plane, which makes it even more challenging to locate and for astronomers to say with certainty how many stars it contains. – messier-objects.com

It has one definite Be star and 29 B-type stars in total. There are three supergiant stars, all of class A or earlier. – Wikipedia

This got me wondering if data from the GAIA mission can help figure out the number of stars in M18? I guess I need to do some research!

This “Hot Neptune” planet orbits 0.1 AU away from a very Sun-like star. Framing the shot to get the planet, the unexpected comet, stars from M18 (bottom-middle), and the Lagoon Nebula (M8, in the background) was tough!