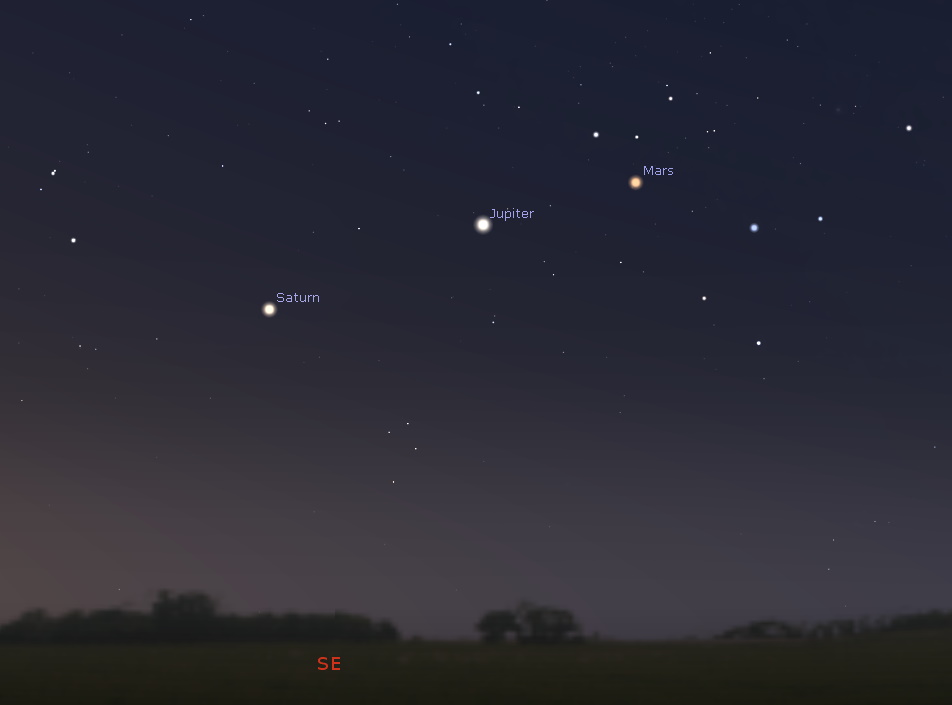 Times are interesting for me right now – we’re packing to move out of our home of 22 years; the big stuff is all in storage, and there are only a couple rooms left to go. The house echoes, and my poor parrots are confused… My granddaughter is a month old, and visits frequently, I’ve got a bit yet to do for taxes, and I’m working on a presentation about interstellar travel for the Warren Astronomical Society… and I keep getting distracted by all the cool things I keep finding – like a paper about suspended animation research being done for Mars missions.

The three planets in the early morning southeastern sky are a bit closer than last week – Mars will appear much closer to Jupiter by week’s end.

The Moon appears high in the southeastern sky at midnight on March 10th. 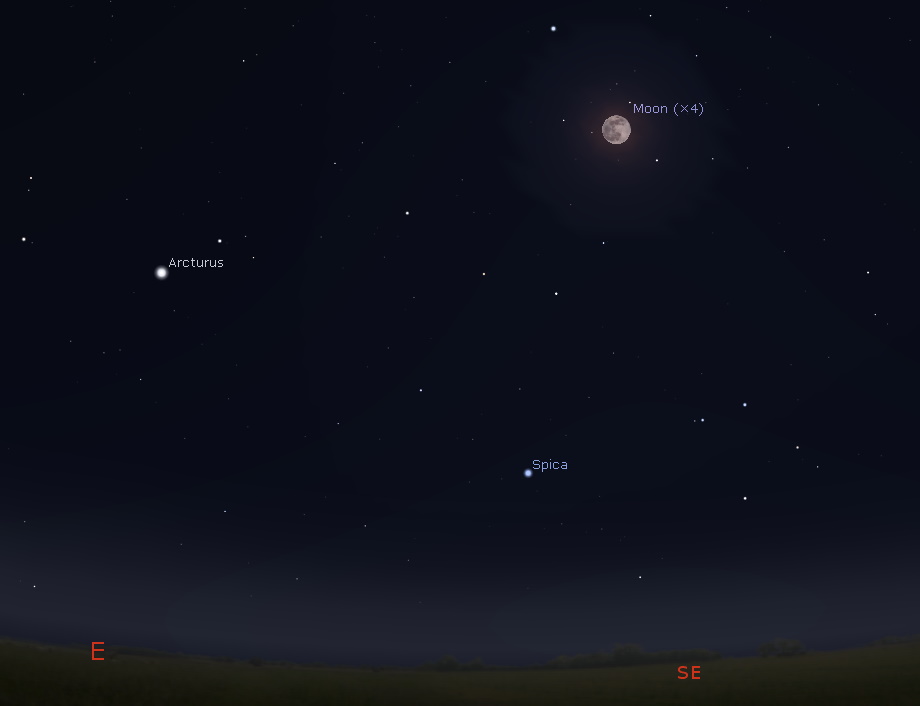 The Moon high in the east-southeastern sky at midnight on March 10th. Credit: Stellarium / Bob Trembley.

On March 12th, the Moon appears above the horizon near the star Spica. 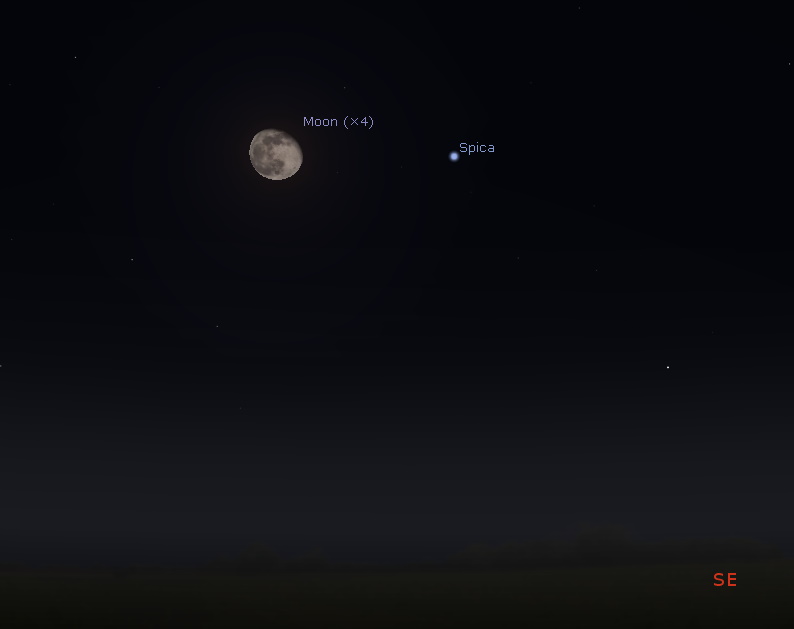 Conjunction of the Moon near the star Spica in the southeastern sky at midnight on March 12th. Credit: Stellarium / Bob Trembley.

The Moon joins the planets in what I’m calling a “Mega-Conjunction” in the southeastern predawn sky from March 17-19th. This will likely be very distracting to commuters heading eastward on those mornings; drivers are urged to get a good look at this spectacle before they leave for their destinations!

Venus is high in the western sky at sunset, and will continue to be the “evening star” through mid-May. 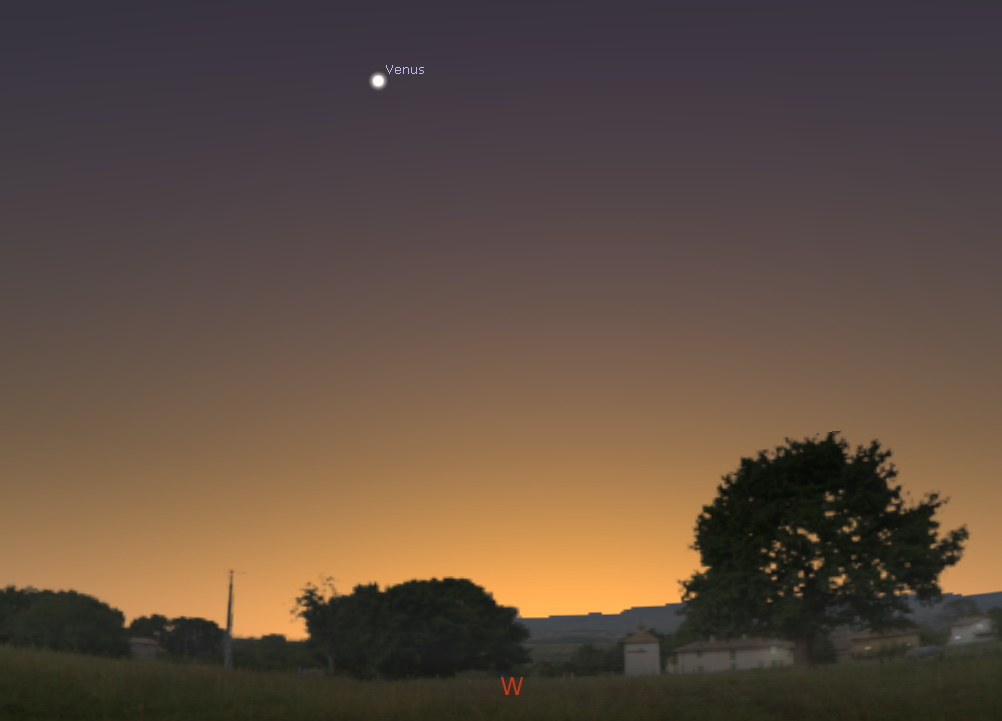 The full Moon occurred on March 9th – the Moon is now a waning gibbous, rising after sunset, visible high in the sky after midnight, and visible to the southwest after sunrise.

The last-quarter Moon occurs on March 16th, rising around midnight, and visible to the south after sunrise.

The Moon from 2020-03-10 – 2020-03-16. Visualizations by Ernie Wright / NASA’s Scientific Visualization Studio.
Click this image to go to the NASA 2020 Moon Phase and Libration site. Click the image of the Moon on that site to download a high-rez image of the current Moon phase with the names of craters and other features shown – many along the terminator.

It's our last full Moon of winter – called the Crow, Worm , Sugar, Sap, or Lenten Moon. And yes, it's also a supermoon, meaning that the Moon is closer than average to the Earth in its orbit. #ObserveTheMoon https://t.co/mPPEjWDTiw pic.twitter.com/kLbj3OaQYX

Humankind’s next space outpost, lunar #Gateway, will serve as a staging point to reach the Moon's surface. A new ESA-backed study is considering whether it could also be used in planetary defence missions, to intercept asteroids approaching Earth ? https://t.co/AhNOV8Ixa8 pic.twitter.com/159h3EF2Uc

Some beautiful large prominences on the Sun’s limb over the last couple days!

Georgia de Nolfo is an experimental astrophysicist, focusing on energetic particles from the Sun. She also develops instruments for an array of applications, including an upcoming CubeSat that will search for gamma rays associated with gravitational waves. https://t.co/tTeJRp4O7X pic.twitter.com/EmTXa2r9jl

Hey Earth, about that asteroid in the news, 52768(1998 OR2), it will pass by Earth at a distance over SIXTEEN times farther than our Moon! I put that *distance* to scale in the diagram below and made Earth/Moon larger so you can see them pic.twitter.com/591f7T7yXm

Position of the planets and a couple spacecraft in the inner solar system – the Parker Solar Probe has crossed the orbit of Venus; from this viewpoint, STEREO Ahead  and Kepler appear to be “close,” but they are 1.6 million miles from each other. 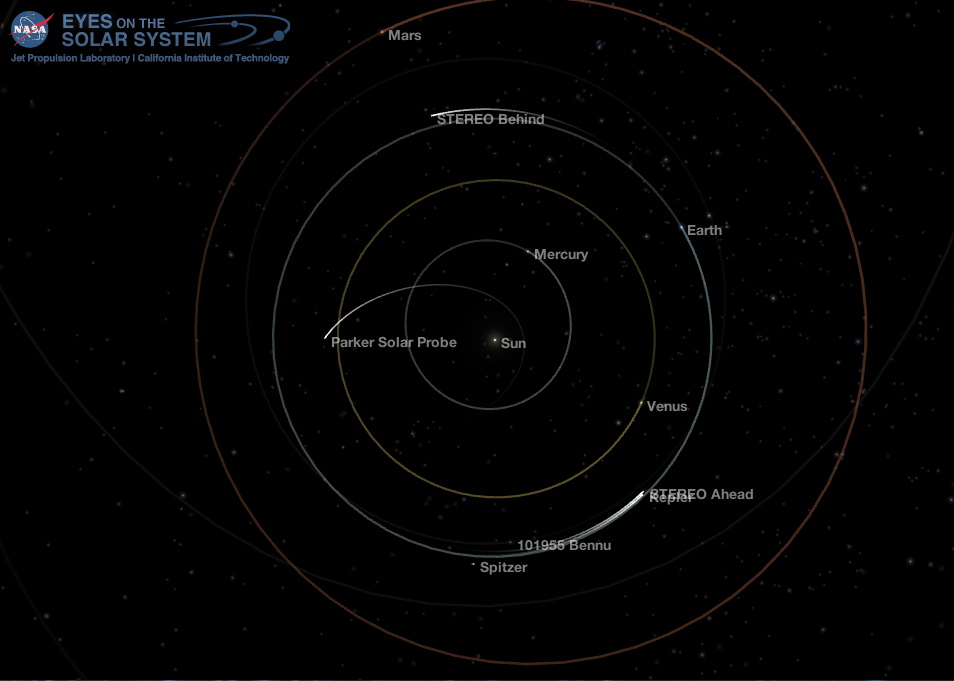 Position of the planets and a couple spacecraft in the inner solar system, 2020-03-10. Credit: NASA Eyes on the Solar System / Bob Trembley. 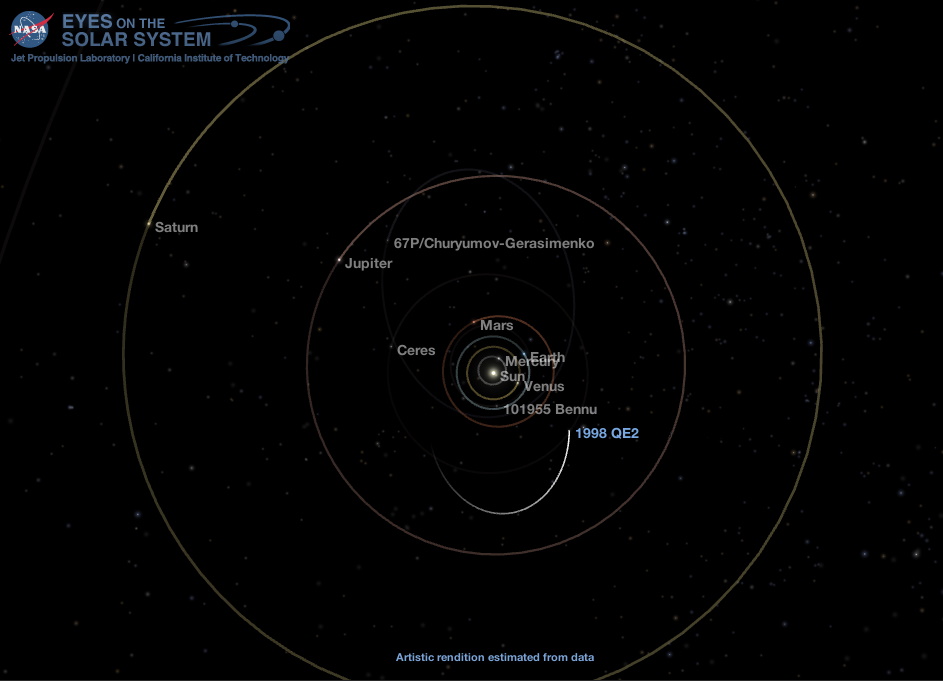 Position of the planets in the middle solar system, 2020-03-10 – the orbit of asteroid 1998 QE2 is highlighted. Credit: NASA Eyes on the Solar System / Bob Trembley.

Position of the planets, dwarf planets, transneptunian objects and far-reaching spacecraft in the outer solar system: 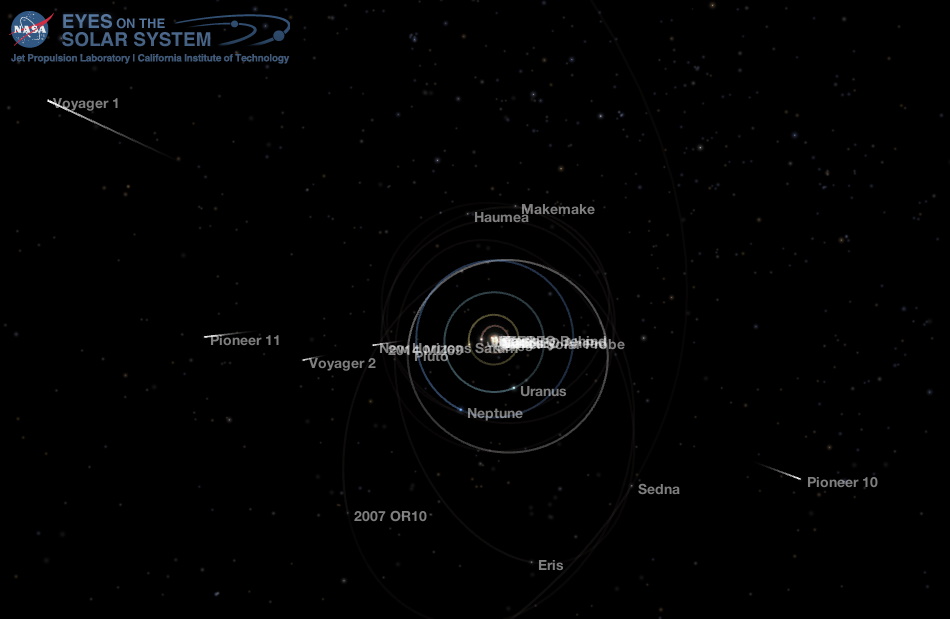 Position of the planets, a few dwarf planets and spacecraft in the outer solar system, 2020-03-10. Credit: NASA Eyes on the Solar System / Bob Trembley. 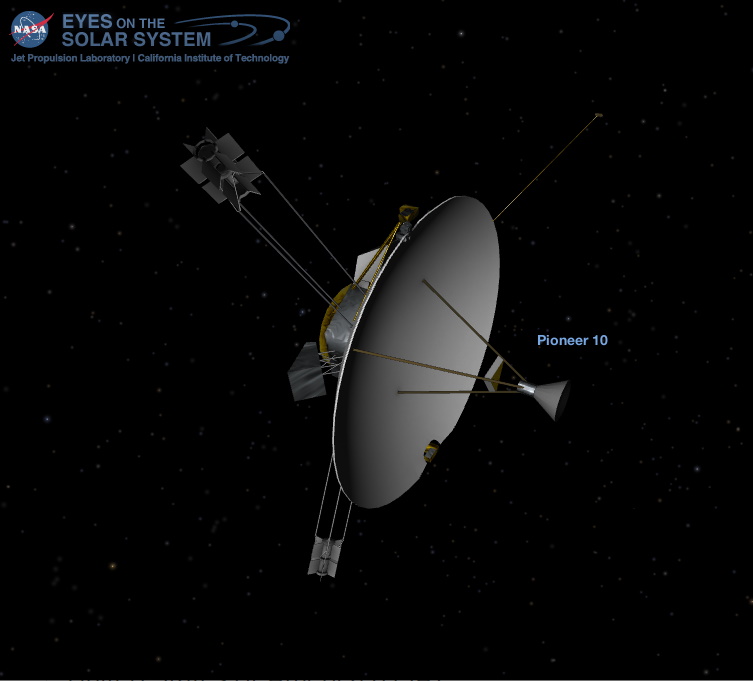 Side view of the Pioneer 10 spacecraft. Credit: NASA Eyes on the Solar System / Bob Trembley.

Pioneer 10  is an American space probe, launched in 1972 and weighing 258 kilograms (569 pounds), that completed the first mission to the planet Jupiter. Thereafter, Pioneer 10 became the first of five artificial objects to achieve the escape velocity that will allow them to leave the Solar System. This space exploration project was conducted by the NASA Ames Research Center in California, and the space probe was manufactured by TRW Inc.

Pioneer 10 was assembled around a hexagonal bus with a 2.74-meter (9 ft 0 in) diameter parabolic dish high-gain antenna, and the spacecraft was spin stabilized around the axis of the antenna. Its electric power was supplied by four radioisotope thermoelectric generators that provided a combined 155 watts at launch.

It was launched on March 2, 1972, by an Atlas-Centaur expendable vehicle from Cape Canaveral, Florida. Between July 15, 1972, and February 15, 1973, it became the first spacecraft to traverse the asteroid belt. Photography of Jupiter began November 6, 1973, at a range of 25,000,000 kilometers (16,000,000 mi), and about 500 images were transmitted. The closest approach to the planet was on December 4, 1973, at a range of 132,252 kilometers (82,178 mi). During the mission, the on-board instruments were used to study the asteroid belt, the environment around Jupiter, the solar wind, cosmic rays, and eventually the far reaches of the Solar System and heliosphere.

Radio communications were lost with Pioneer 10 on January 23, 2003, because of the loss of electric power for its radio transmitter, with the probe at a distance of 12 billion kilometers (80 AU) from Earth. – Wikipedia 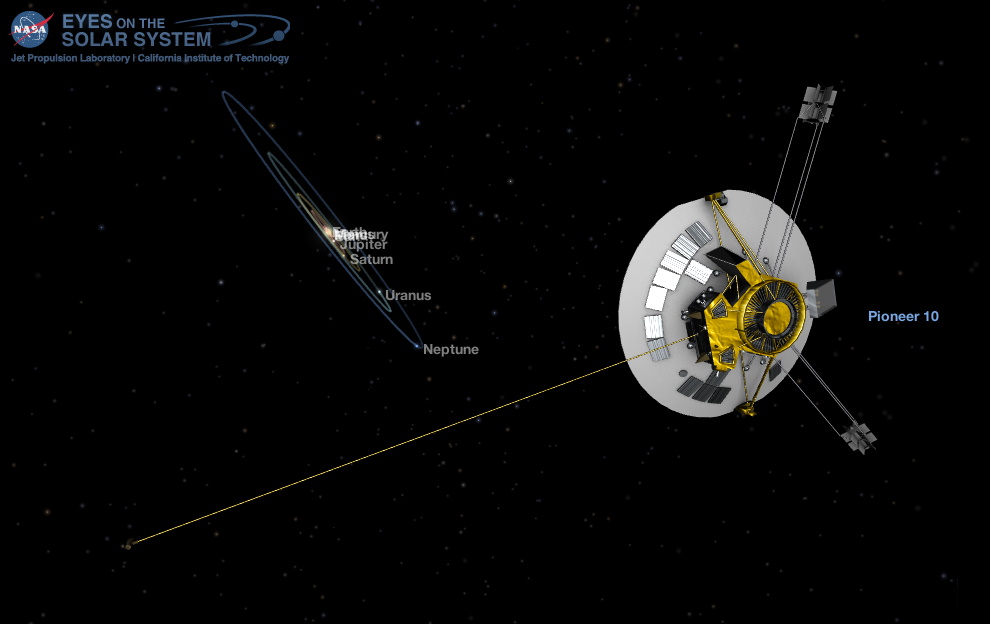 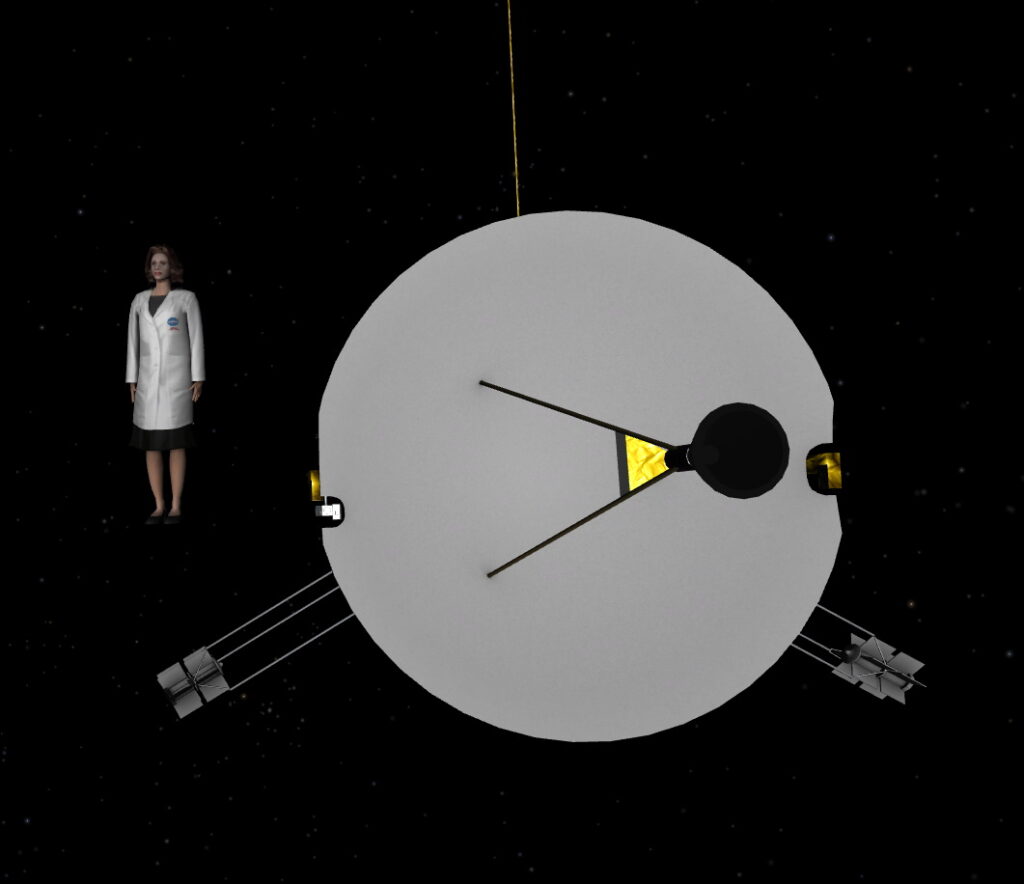 12 of Bennu’s surface features now officially have International Astronomical Union-approved names! OSIRIS-REx team members proposed names for the features, which are inspired by birds & bird-like creatures in mythology, & the places associated with them. https://t.co/ztcpWUp0us pic.twitter.com/N2EM2QUtEv

The @SpaceX #Dragon is powered up and open for business at the station as @AstroDrewMorgan and @Astro_Jessica begin unpacking and activating the new science. More pix… https://t.co/N3bP9qF37E pic.twitter.com/xOb6sEbXQq

ESA/Hubble #Flashback: Catalogued as HD 44179, this nebula is more commonly called the "Red Rectangle" because of its unique shape and colour.

Antarctica is losing ice mass at a rate of 145 gigatonnes per year.

But how big is 1 gigatonne? This @NASAClimate video gives you an idea. #ClimateEmergency pic.twitter.com/6WsaTAzUyJ

Keeping an eye on climate? We have updated our "vital sign" dashboard with the latest sea level data, as seen from space ?️https://t.co/f8Cpqo7QQT