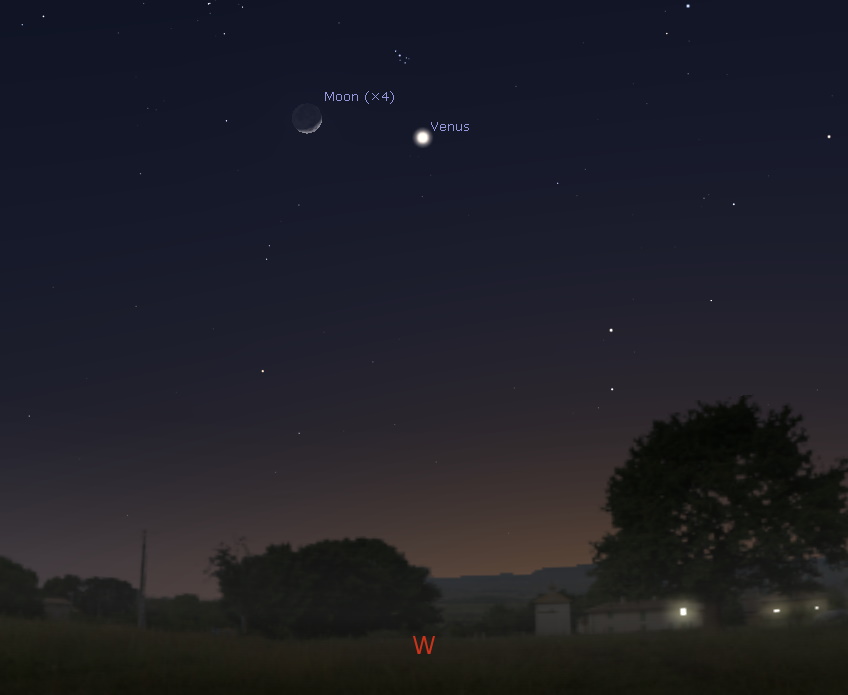 My wife and I have finished moving out of our home of 22 years, and are now living in her parent’s basement; we were planning on taking our time looking for a new home, but with Michigan on COVID-19 lock-down, any home-hunting plans have gone out the window. My wife’s school is having teachers interact with students via Google Classroom, and the Warren Astronomical Society held their first online “virtual meeting.”

I saw a comment on a Solar System Ambassador (SSA) forum that the greatly increased streaming activity is putting a lot of pressure on the internet. In one SSA’s community, she could not connect to Skype or Facebook Live because of internet congestion. With so many communities going to telework, tele-education, etc. and also streaming HD video around the clock, the internet is very congested on a limited bandwidth. Some people cannot stream a doctor’s appointment; some doctors cannot get pages to load to refill much needed prescriptions. For educational purposes, a suggestion for SSAs was to create pre-recorded videos and load them in SD, that would help the situation and still meet the educational needs of families and communities. I’ve had ideas for a couple videos for quite some time – perhaps now is the time to start on them.

The three planets in the early morning southeastern sky are a much closer to each other this week; Mars appears very near Saturn by the weekend.

The Moon appears near Venus in the western sky at dusk from March 27-29th this week. Credit: Stellarium / Bob Trembley.

The bright star Vega in the constellation Lyra rises in the northeastern sky around midnight this week. 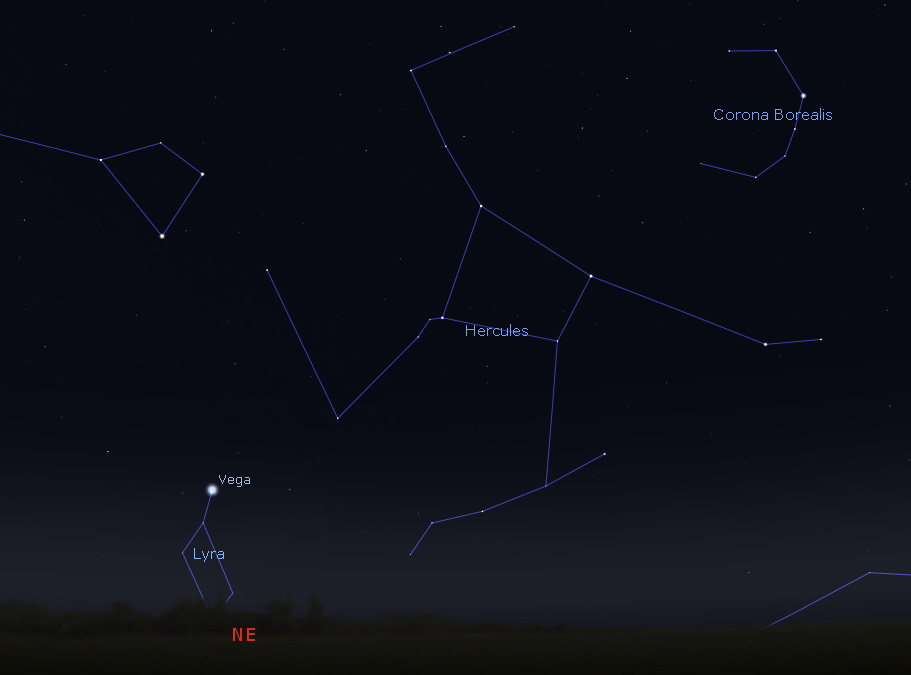 The star Vega in the constellation Lyra rising in the northeastern sky around midnight on March 24th. Credit: Stellarium / Bob Trembley.

The new Moon occurs on March 24th – it will not be visible at this time… unless it eclipses the Sun and the orbiting Solar Dynamics Observatory catches it again.

After March 24th, the Moon will be an waxing crescent, visible toward the southwest in early evening.

The Moon from 2020-03-24 – 2020-03-30. Visualizations by Ernie Wright / NASA’s Scientific Visualization Studio.
Click this image to go to the NASA 2020 Moon Phase and Libration site. Click the image of the Moon on that site to download a high-rez image of the current Moon phase with the names of craters and other features shown – many along the terminator.

The Moon as Art

The Moon as Art?

For over 10 years, our Lunar Reconnaissance Orbiter has taken spectacular images of our Moon, like this one. See the full Moon as Art gallery: https://t.co/iuCkty79dP pic.twitter.com/RoZZoHGWUs

More beautiful large prominences on the Sun’s limb over the last couple days!

After nearly two decades monitoring the Sun, the SORCE spacecraft was powered down in February. Read about how its data has advanced our understanding of our star and its influence on Earth. ⬇️ https://t.co/AvZjx7nktS 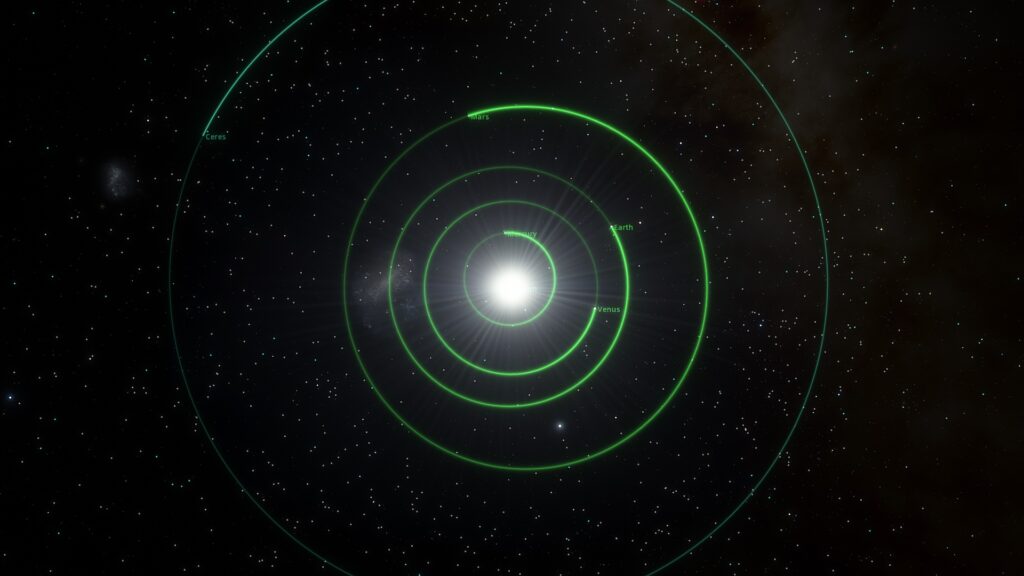 Position of the planets and several asteroids in the inner solar system, 2020-03-10. Credit: SpaceEngine / Bob Trembley. 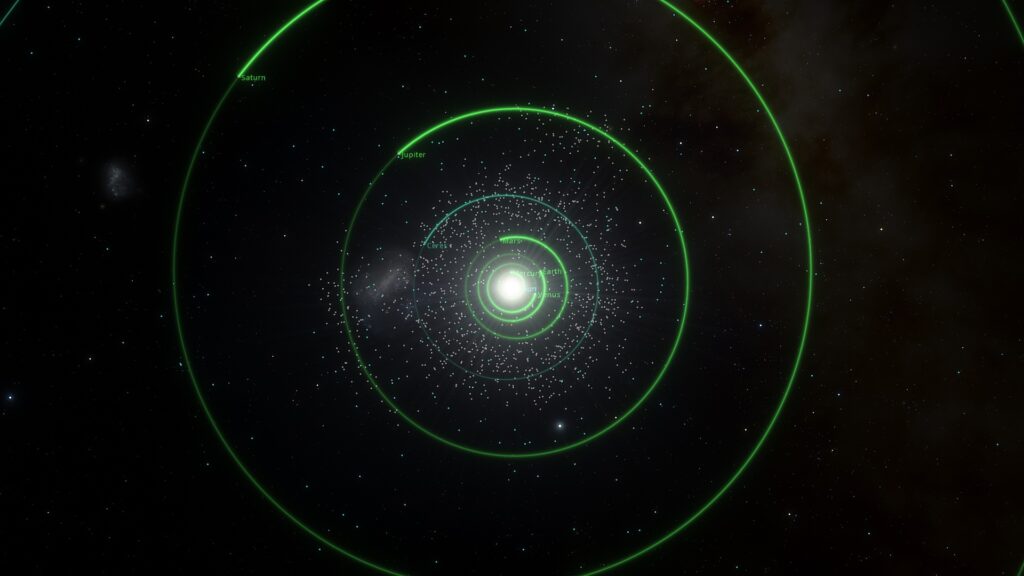 Position of the planets and several asteroids in the middle solar system, 2020-03-10. Credit: SpaceEngine / Bob Trembley.

Side view of the inner and middle solar system, showing the alignment of the planets causing the conjunction in the eastern predawn sky.

Side view of the position of the planets in the inner and middle solar system on 2020-03-24. Credit: SpaceEngine / Bob Trembley.

Position of the planets, dwarf planets, transneptunian objects in the outer solar system: 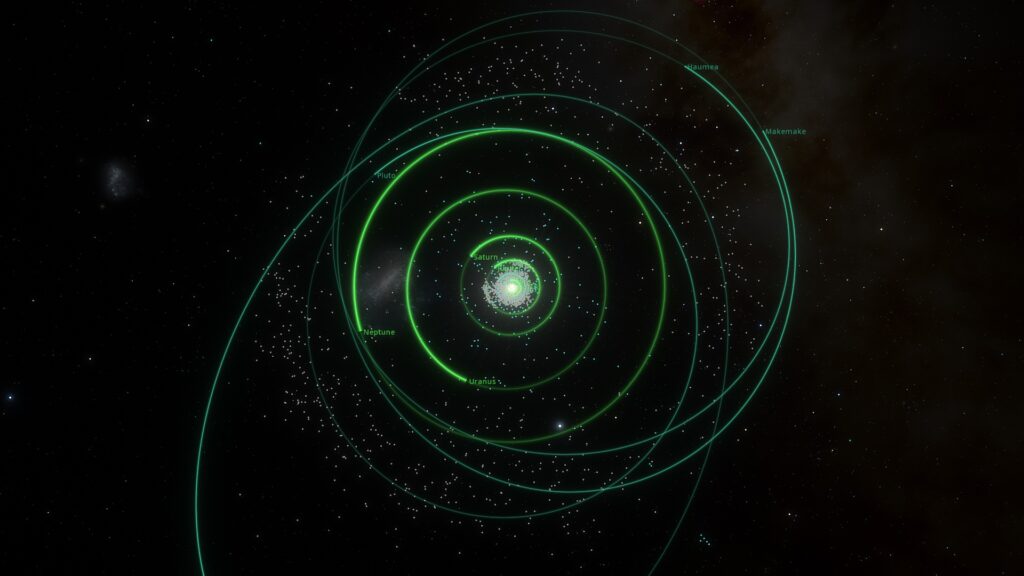 Probably one of Bennu’s coolest rocks.

Vision tests and 3D bioprinting took place aboard the station today as a new crew on Earth prepares for launch next month. Read more… https://t.co/F9VVB7lACZ pic.twitter.com/Y1daNMvaYf

I’ve never seen the word bioprinting before (neither has my spell-checker); my guess was close, but I was still surprised when I saw: “NASA Flight Engineer Jessica Meir activated a 3-D bioprinter that is being tested for its ability to manufacture human organs in space.” My jaw hung slack for a moment there… Just WOW!

Using Hubble, astronomers have discovered that the pressure from some supermassive black holes can push material away at a fraction of the speed of light. Depicted in this illustration, these outflows are the most energetic ever witnessed in the universe: https://t.co/kA525J8L6x pic.twitter.com/DcTA3jNH5P

NASA’s new 3-dimensional portrait of methane shows the world’s second largest contributor to global warming as it travels through the atmosphere, along with its ground sources. https://t.co/bmU8hyewgx

During this difficult time, IDA has witnessed how the night, and its star-filled sky, can be a source of comfort, unity & inspiration for our worldwide community. In the coming weeks, we commit to maintaining our passion for the night. Learn more: https://t.co/ZQ9FrHtNpd

Around the world, we're faced with the unique challenge to come together by being apart – to be #AloneTogether. We hope wherever you are, you can safely gaze upon the #nightsky this evening & feel connected to our global community. We'll be looking up with you ✨
?: Royce Bair pic.twitter.com/xy7GXcucom

Continuing with my visual tour of nearby stars and their systems, we travel to the red dwarf Ross 248, 10.31 light years distant. 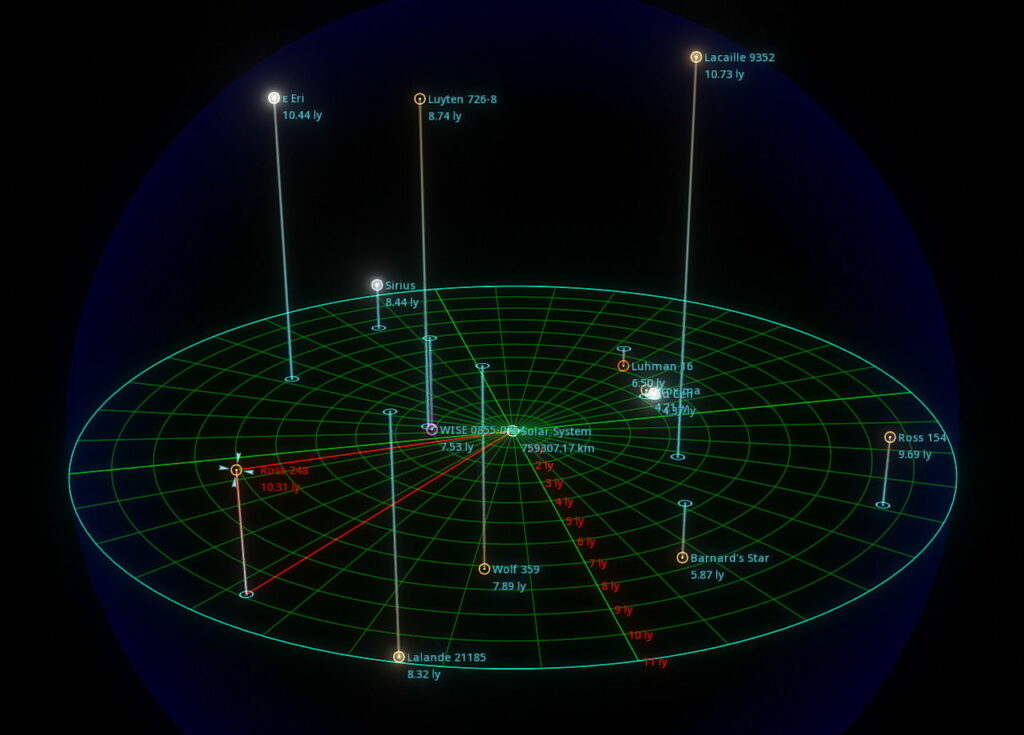 Distance to Ross 248 from Sol; the plane (green) is aligned with the orientation of the plane of the Milky Way galaxy. Credit: SpaceEngine / Bob Trembley.

Ross 248, also called HH Andromedae or Gliese 905, is a small star approximately 10.30 light-years (3.16 parsecs) from Earth in the northern constellation of Andromeda. It was first catalogued by Frank Elmore Ross in 1926 with his second list of proper-motion stars; on which count it ranks 261st in the SIMBAD database. It was too dim to be included in the Hipparcos survey.

Within the next 80,000 years, Ross 248 is predicted to be nearest star to the Sun for a brief time, overtaking the current nearest star and triple system, Alpha Centauri. Despite its proximity it is too dim to be seen with the naked eye.

This star has about 12% of the Sun’s mass and 16% of the Sun’s radius, but only 0.2% of the Sun’s luminosity. It has a stellar classification of M6 V, which indicates it is a type of main-sequence star known as a red dwarf. This is a flare star that occasionally increases in luminosity. With high probability, there appears to be a long-term cycle of variability with a period of 4.2 years. This variability causes the star to range in visual magnitude from 12.23 to 12.34. In 1950, this became the first star to have a small variation in magnitude attributed to spots on its photosphere. – Wikipedia 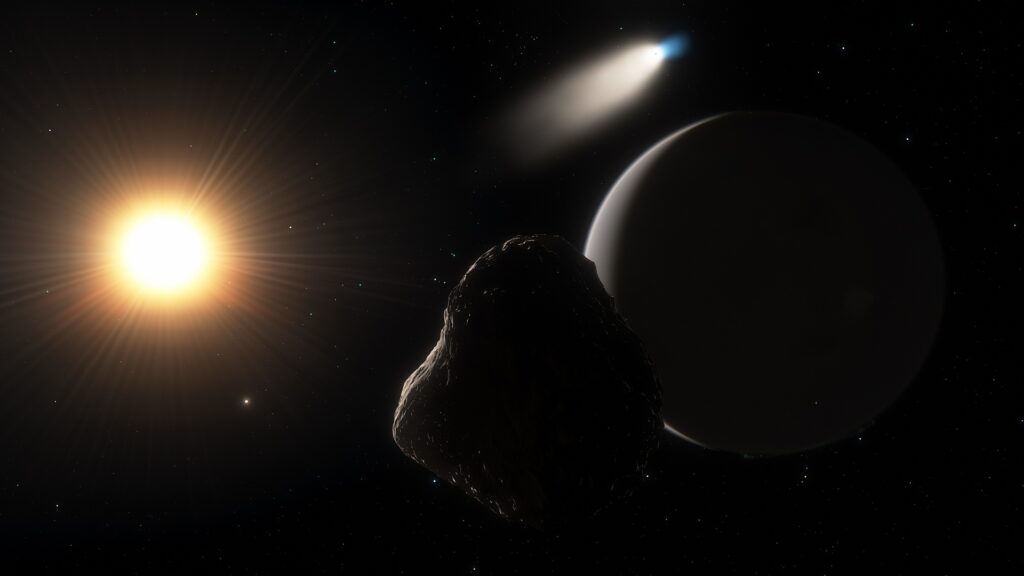