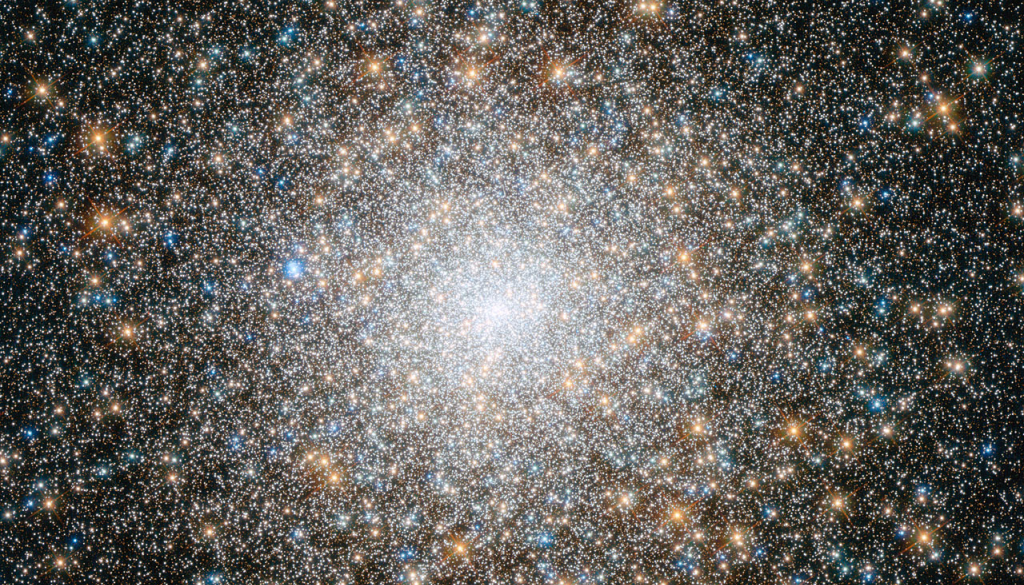 I have to admit – when I saw M15 today while working on this post, I stared at it for about 5 minutes and kept saying “Wow!” Yup, that still happens to me!

My granddaughter took me for a walk down the block this weekend – when we got to end of the block she pointed up into the sky and said “Moon!” I looked up, and sure enough, there it was! I was blown away – she’s only two!

I sound like a broken record again: Jupiter, Venus, Mars and Saturn continue to appear in the southeastern predawn sky all week.

The Moon appears near the star Regulus in the western sky at midnight on May 10th.

The Moon appears near the star Spica in the southern sky at midnight on May 14th.

Three sunspots rotating out of view, and two large sunspots on the Sun’s earthward face – flaring quite a bit.

Spaceweather.com says “Earth-orbiting satellites have just detected an X1-class solar flare. The source is “mixed-up” sunspot AR3006. Radiation from the flare ionized the top of Earth’s atmosphere, causing a shortwave radio blackout over the Atlantic Ocean.”

Lots of coronal loop activity in the southern hemisphere.

Details: “The sun this morning 09 May 2022
Protuberance and filament on the edge of a limb. Wonderful show.
Ts70 – Daystar Quark – Asi 120mms
AS3 – Astrosurface and Photoshop.
Good sky to all.”

Been seeing quite a few of these lately!

Position of the planets & several spacecraft in the inner solar system on May 10th:

JWST - I can see clearly now!

Change of command on the International Space Station

This week’s seven new planets were found either through their radial velocities (pi Men d, TYC 2187-512-1 b, and iot Dra c) or spied on by TESS during their transits (TOI-1246 b, c, d, & e). We’ve also added 180 new sets of parameters—most of them from Patel & Espinoza 2022. Find the new data in the Planetary Systems Table and its companion table, Planetary Systems Composite Parameters. – exoplanetarchive.ipac.caltech.edu

Exciting new results from the Event Horizon Telescope – May 12!

Assistant Professor Tim Wisner tweets that the EHT has been observing the black hole in the center of the Milky Way: Sgr A*

Messier 15 (M15), also known as the Great Pegasus Cluster, is a globular cluster located in the northern constellation Pegasus. The cluster has an apparent magnitude of 6.2 and lies at a distance of 33,600 light years (10,000 parsecs) from Earth. It has the designation NGC 7078 in the New General Catalogue.

Messier 15 is one of the oldest known globulars in our galaxy. It has an estimated age of 12 billion years and only 1 percent of the Sun’s iron content. – messier-objects.com

Messier 15 has a density classification IV and is one of the most densely concentrated clusters of its kind. The cluster is notable for its steep central cusp, with an exceptionally large number of stars orbiting what is likely a central black hole. – messier-objects.com

The central density cusp is a result of the cluster having undergone a core collapse, a contraction of its core region. This is a common occurrence in globular clusters as they evolve: Messier 30 and Messier 70 also contain a collapsed core. A total of 21 of the 157 known globular clusters in the Milky Way, and possibly 8 more, including Messier 62 and Messier 79, have undergone a core collapse.

The core of Messier 15 is very small – about 0.14 arc minutes or 1.4 light years – compared to the cluster’s size. Half the cluster’s mass is concentrated within the central 10 light years, or 1.06 arc minutes. Scientists have theorized that either the cluster contains a supermassive black hole at its core or the concentration of mass is a result of the gravitational interaction of the stars in this area. A survey of the cluster’s inner 22 light years alone revealed about 30,000 stars. – messier-objects.com

The cluster contains more than 100,000 stars, including a considerable number of variables (112) and pulsars (8), neutron stars formed in supernova explosions that occurred when M15 and the universe itself were still young. – messier-objects.com

What I was listening to while I was writing this