When it comes to astronomy, asteroids are pretty much my favorite subject; the Sun comes in #2 by a wide margin. I have a presentation about the Sun that I’ve given numerous times – I’m modifying it to present remotely to my wife’s middle-school science students, and creating a worksheet based on my presentation. Here’s me giving my Sun presentation to the Warren Astronomical Society before the total solar eclipse of 2017:

I’ve also suggested to my wife that she show the following videos to her science students:

Mars continues to pull away from Saturn and Jupiter in the southeastern predawn sky; the Moon joins the early morning planets from May 12-15th.

The Moon appears near the planets for several days in the southeastern predawn sky from May 12-15. Credit: Stellarium / Bob Trembley.

Mercury appears low on the northwestern horizon at sunset this week. 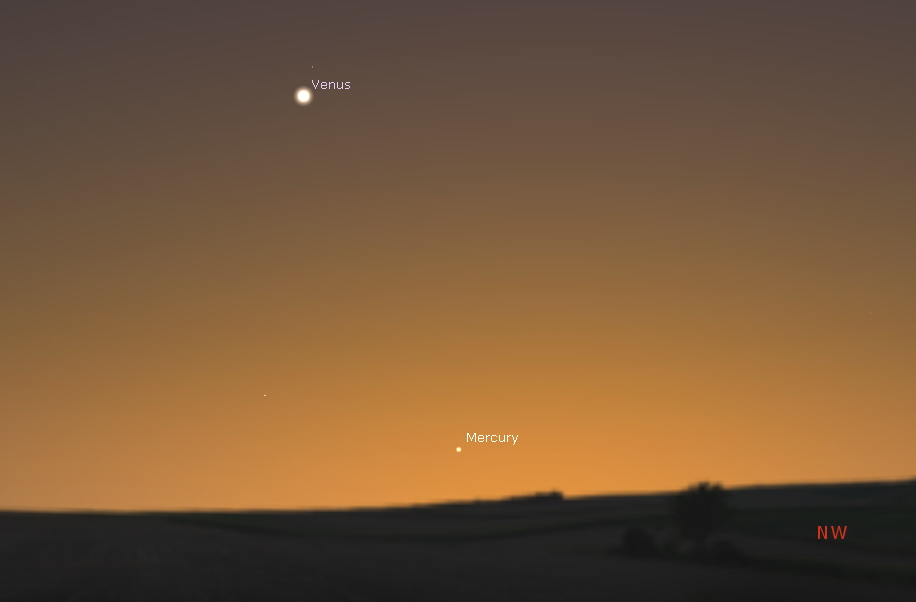 Mercury low on the no northwestern horizon at sunset this week. Credit: Stellarium / Bob Trembley.

Venus appears a bit lower each evening on the northwestern horizon after sunset.  Comet C/2019 Y4 (ATLAS) will be north of Venus and the star Capella, but may require binoculars or a telescope to see. 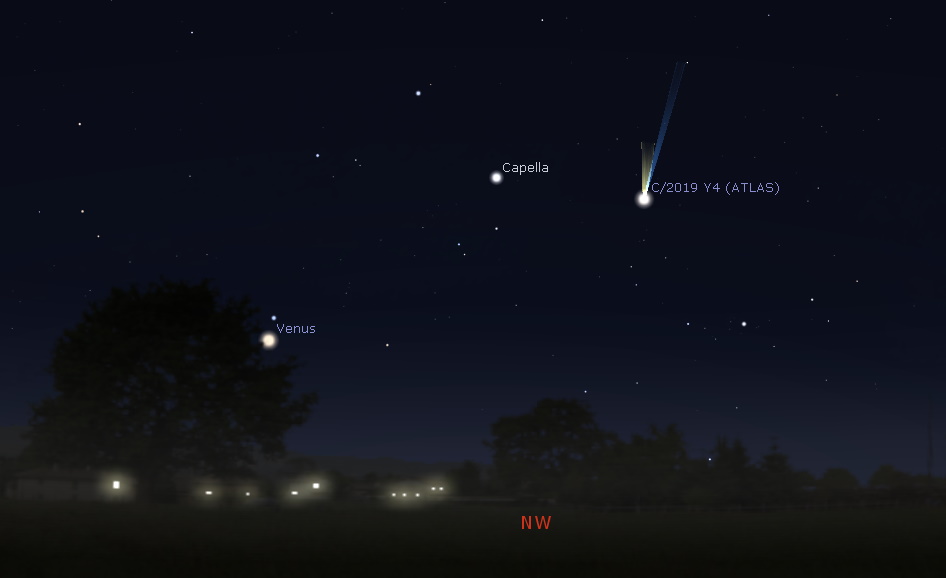 The third quarter Moon occurs on May 14th, rising around midnight, and visible to the south after sunrise.

After May 14th, the Moon will be a waning crescent, visible low to the east before sunrise (my favorite).

This week on #NASAatHome Spaceport Series, we're talking #Artemis, which is @NASA's program which will land the first woman and next man on the Moon by 2024.

Live at 1 p.m. ET we'll talk with experts about launch complex 39B, which is ready for launch: https://t.co/qoF1zGbqZm pic.twitter.com/7XrfsPhh5F

The Sun has been spotless for 9 days. Coronal holes remain open at both poles, and smaller holes pepper the face of the Sun.

Light prominence on the Sun for the last couple days – a short-lived pyramidal “flame” prominence appears on the Sun’s limb in the video below.

Last night there was what appears to be a large fireball caught between 22:34:12 and 22:34:22 travelling SE to NW captured from #Thatcham @VirtualAstro @UKMeteorNetwork @UKspace pic.twitter.com/WE3gCfUXXg 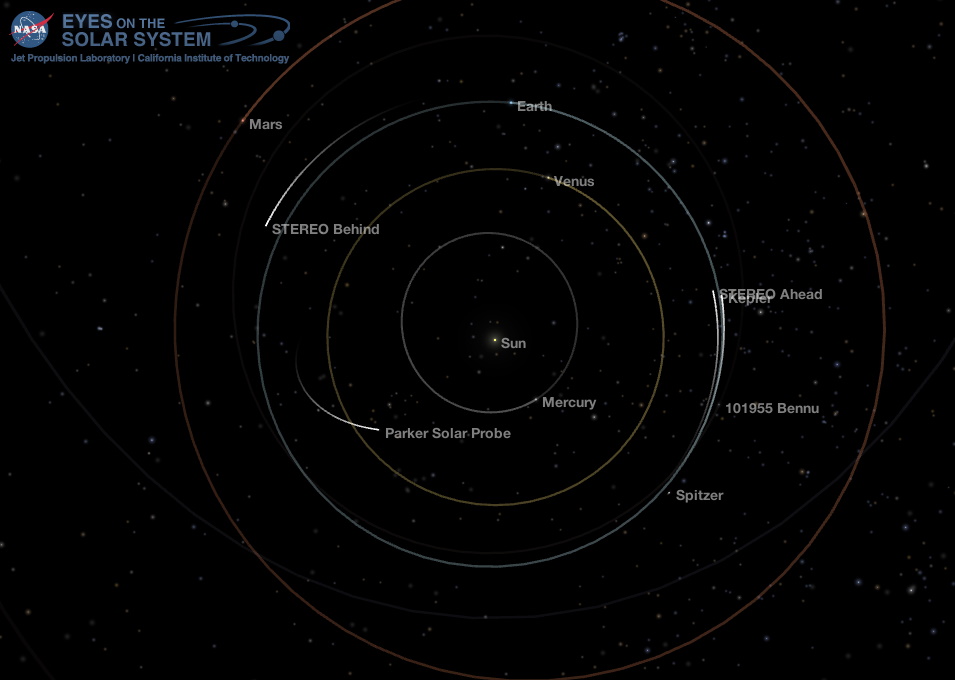 Position of the planets and a couple spacecraft in the inner solar system, 2020-05-12. Credit: NASA Eyes on the Solar System / Bob Trembley. 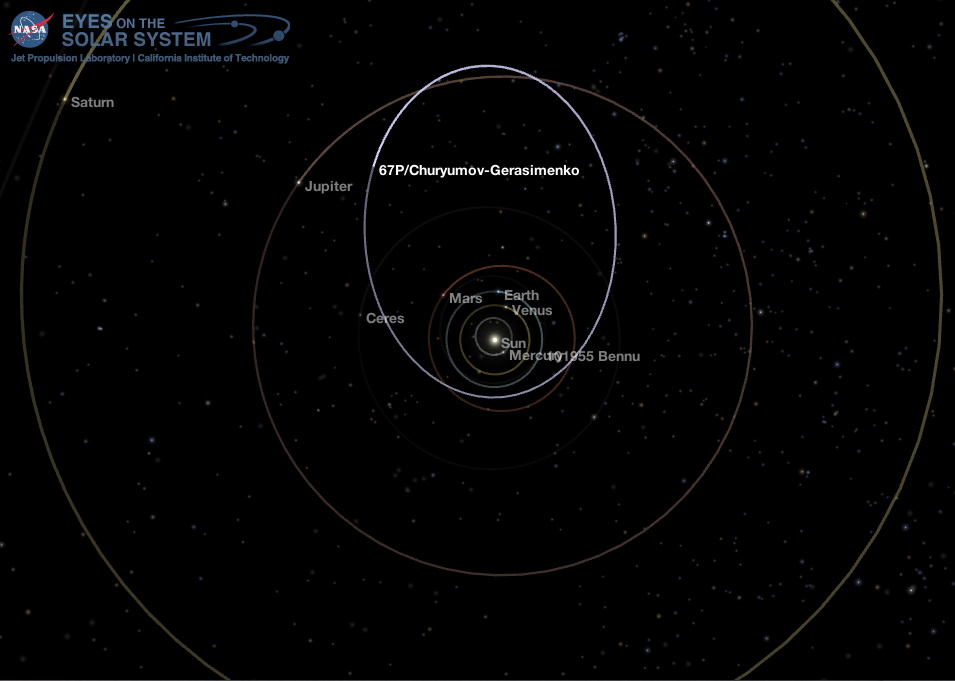 Position of the planets in the middle solar system, 2020-05-12 – the orbit of comet 67P/Churymov-Gerasimenko is highlighted. Credit: NASA Eyes on the Solar System / Bob Trembley. 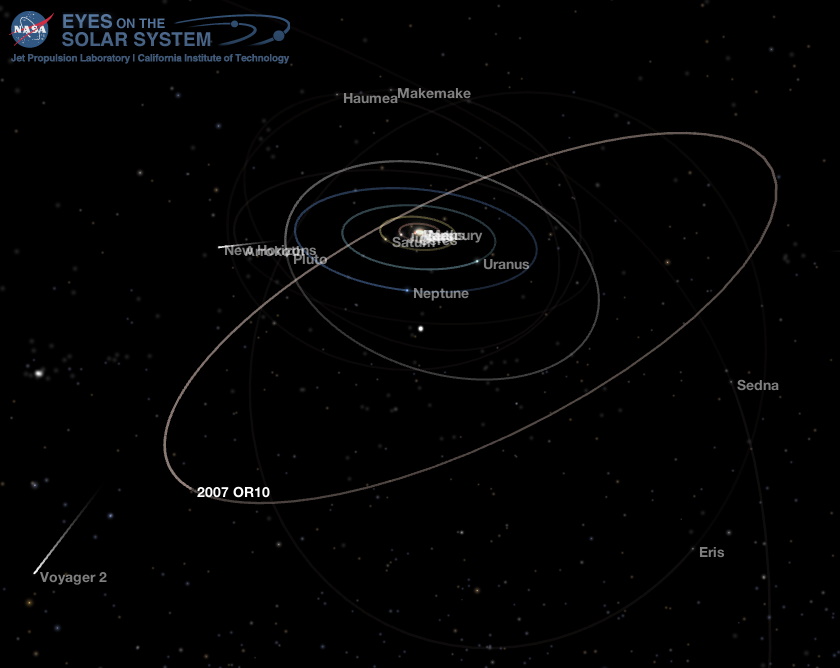 Position of the planets in the outer solar system on 2020-05-12 – the orbit of transneptunian object 2007 OR10 is highlighted. Credit: NASA Eyes on the Solar System / Bob Trembley.

This image was taken on April 28 from a distance of 6 miles (10 km). It was captured two weeks after Checkpoint rehearsal, and two days before orbit re-entry.

The @NorthropGrumman #Cygnus spacecraft was released from the @CSA_ASC #Canadarm2 robotic arm at 12:09pm ET today. It will orbit Earth until the end of May for more space research. Read more… https://t.co/UVtTaifId3 pic.twitter.com/wTfIymPbdr

#HubbleClassic This image of the nebula K 4-55 was the last of many beautiful pictures taken by Hubble's Wide Field and Planetary Camera 2 over >15 years. Astronauts removed & replaced the camera during Servicing Mission 4, which launched #OTD in 2009: https://t.co/fqEmwWlqmf pic.twitter.com/N8aqJWWMyR

I recently spotted evidence of an eclipse on Mars. Watch closely as the surface gets dimmer, and my solar power dips just before 11:25 a.m. Phobos—the bigger of Mars’ two moons—was responsible for this one, as it slipped between the sun and me. pic.twitter.com/HNvDj7bQkS

With nods to @BackyrdAstroGuy for the idea, here’s some Jupiter for your phone’s wallpaper image.

How to browse the images from the monitoring cameras on @BepiColombo @ESA_Bepi at @ESA's Planetary Science Archive (https://t.co/uIlGw0i0fu) in six simple steps. CC @esascience @esapsanews pic.twitter.com/zckN0IwziH

Volcanic activity has shaped Greenland and Antarctica, but it's not to blame for today's rapidly melting polar ice sheets. Learn why. https://t.co/Nbv5Ri7nJK

While not exactly spacecraft news, the KSP twitter feed has been posting a LOT of educational and space-related news – this one was pretty cool!

In March 5, 2019 NASA has successfully tested an advanced air-to-air photographic technology in flight, capturing the first-ever images of the interaction of shockwaves from two supersonic aircraft in flight.

Inquiring minds want to know…have we seen a change in #lightpollution as a result of lockdowns around the world? @jamieacarter explores this question with IDA Director of Public Policy @JohnBarentine, who weighs in with some interesting observations https://t.co/YWJKsRfBUd

This is an optical zoom to the star cluster:

This prompted me to fire up SpaceEngine, and create a virtual fly-to the star cluster:

Continuing with my visual tour of nearby stars and their systems, we travel to the 61 Cygni star system, 11.41 light years distant. 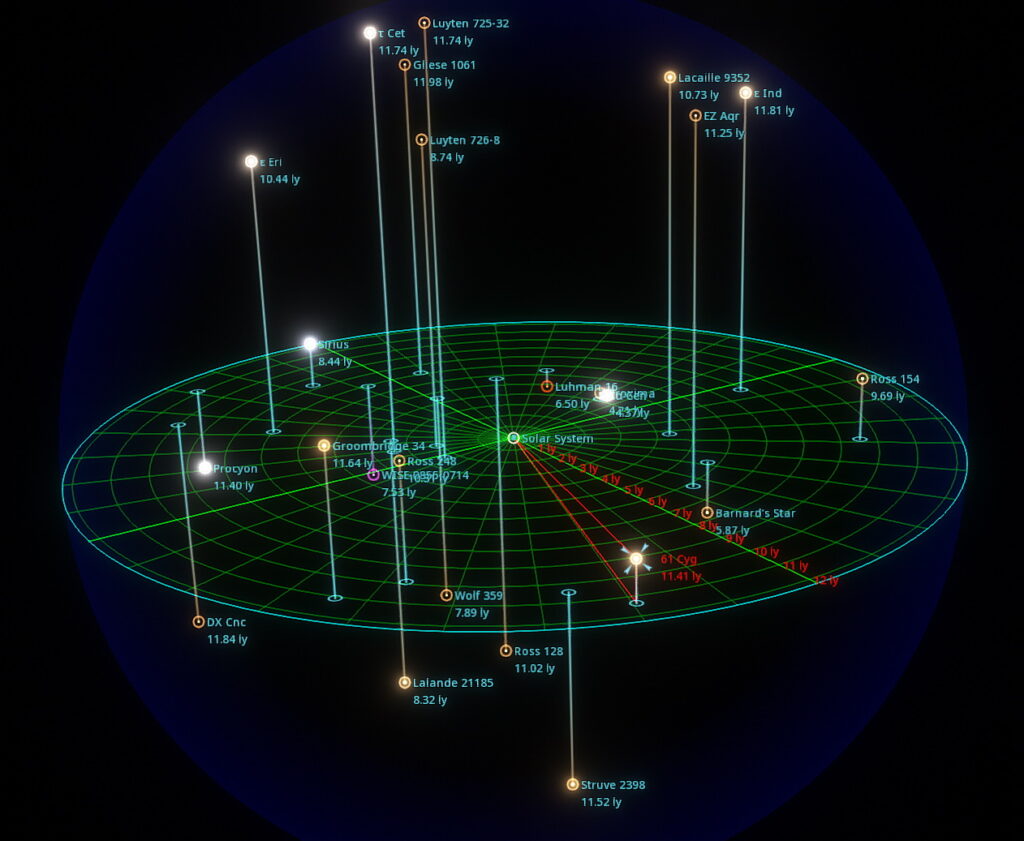 Distance to 61 Cygni from Sol; the plane (green) is aligned with the orientation of the plane of the Milky Way galaxy. Credit: SpaceEngine / Bob Trembley.

61 Cygni /ˈsɪɡni/ is a binary star system in the constellation Cygnus, consisting of a pair of K-type dwarf stars that orbit each other in a period of about 659 years. Of apparent magnitude 5.20 and 6.05, respectively, they can be seen with binoculars in city skies or with the naked eye in rural areas without photopollution.

61 Cygni first attracted the attention of astronomers when its large proper motion was first demonstrated by Giuseppe Piazzi in 1804. In 1838, Friedrich Bessel measured its distance from Earth at about 10.4 light-years, very close to the actual value of about 11.4 light-years; this was the first distance estimate for any star other than the Sun, and first star to have its stellar parallax measured. Among all stars or stellar systems listed in the modern Hipparcos Catalogue, 61 Cygni has the seventh-highest proper motion, and the highest among all visible stars or systems.

Over the course of the twentieth century, several different astronomers reported evidence of a massive planet orbiting one of the two stars, but recent high-precision radial velocity observations have shown that all such claims were unfounded. No planets have been confirmed in this stellar system to date.

61 Cygni is relatively dim, so it does not appear on ancient star maps, nor is it given a name in western or Chinese systems. – Wikipedia 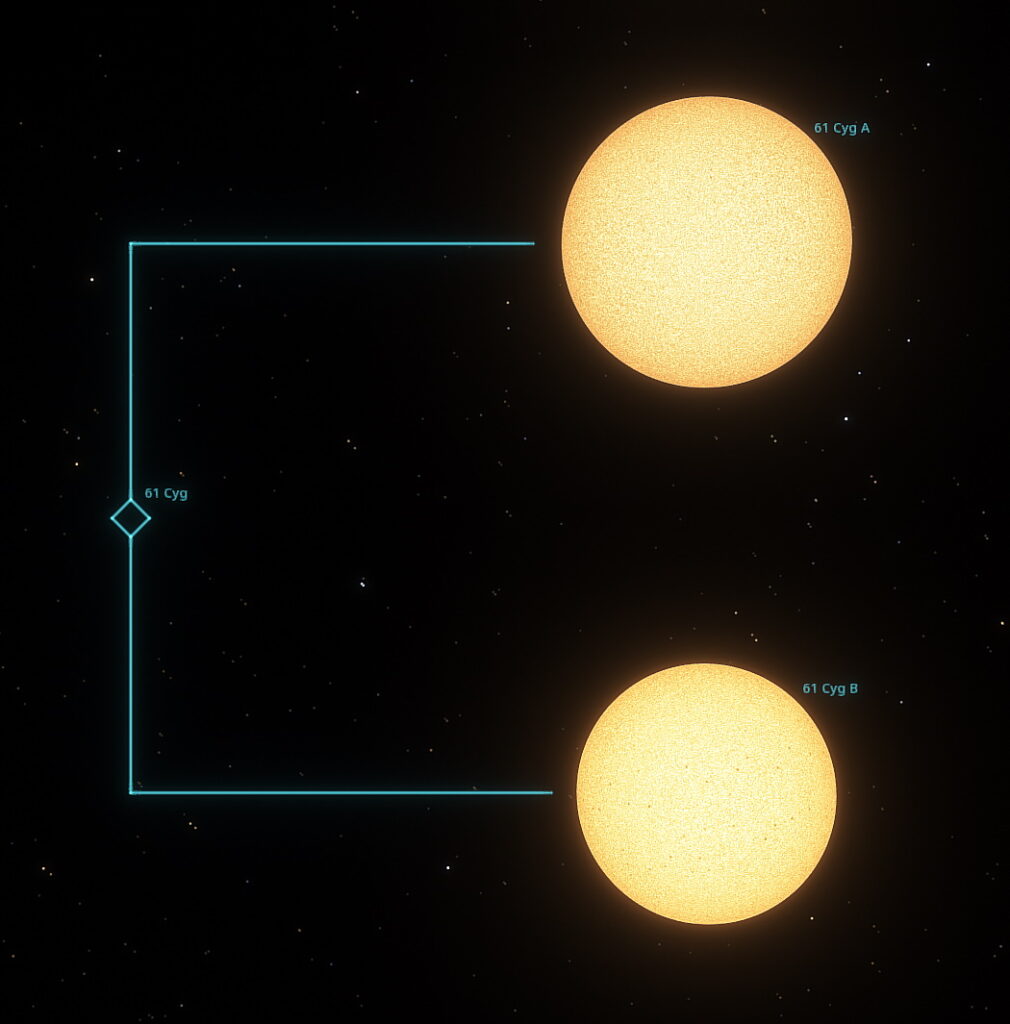 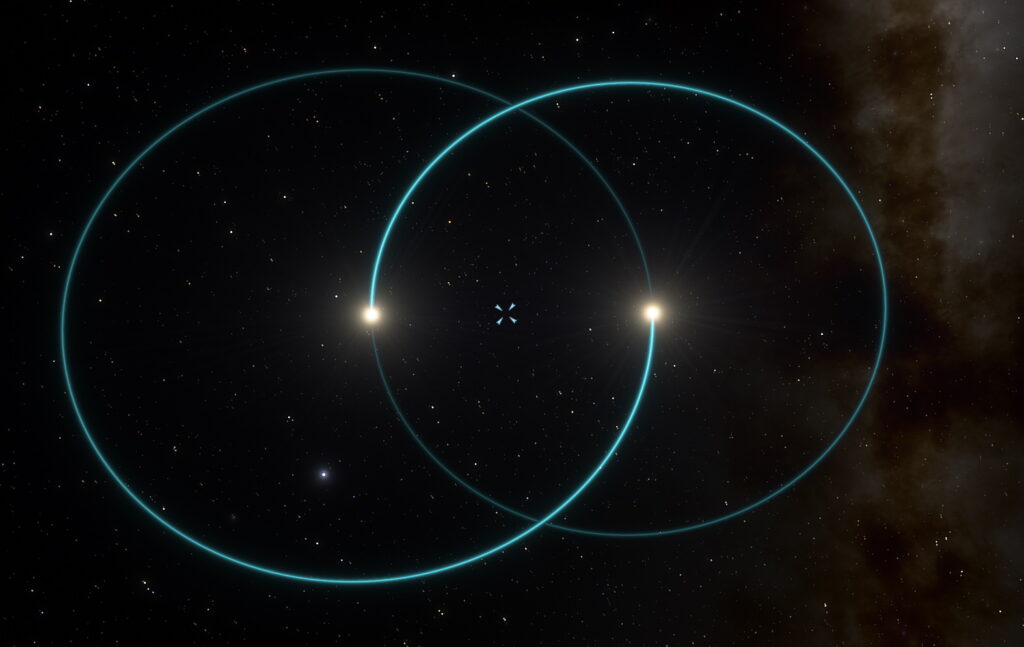 Top-down view of the orbits of the stars in the 61 Cygni star system – the system barycenter is highlighted. Credit: SpaceEngine / Bob Trembley. 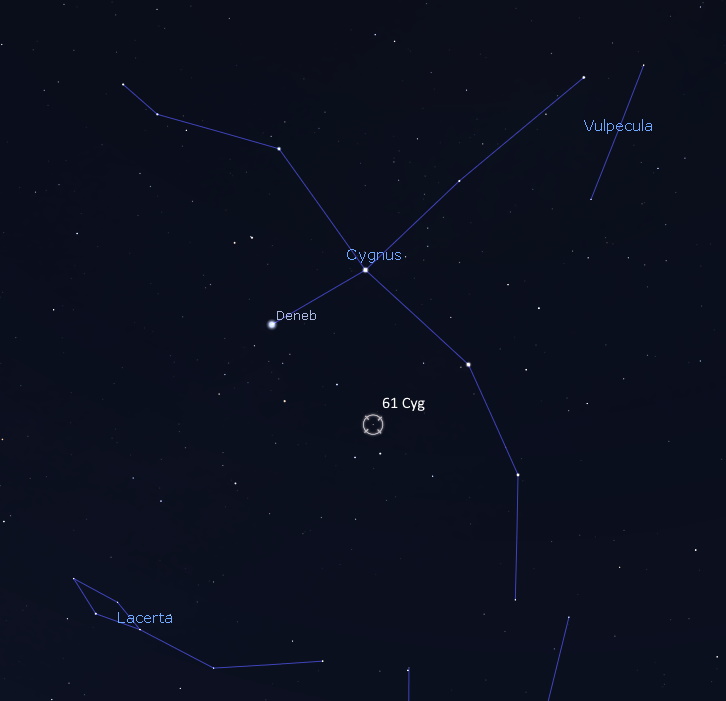 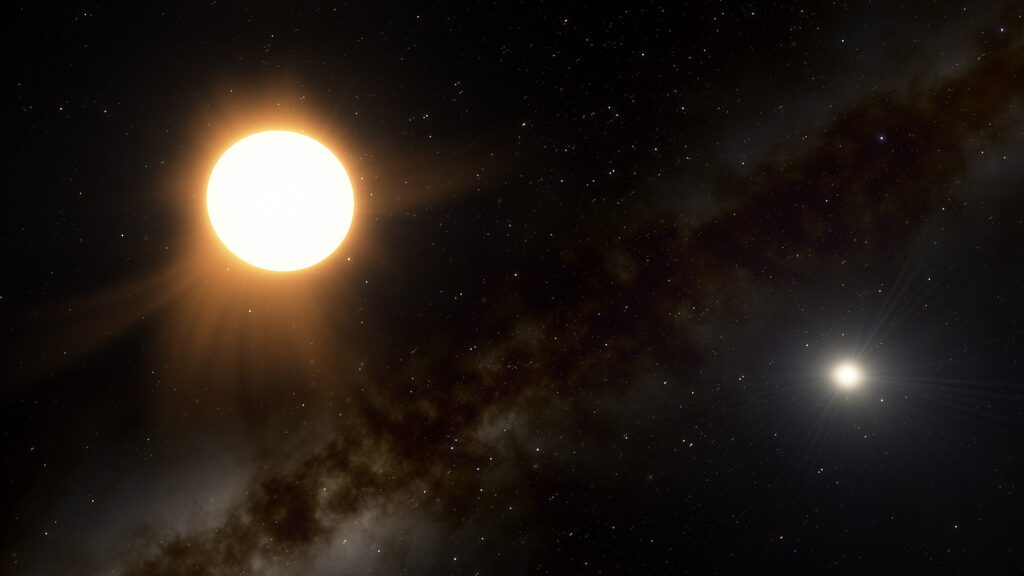 NASA Eyes on the Solar System: an immersive 3D solar system and space mission simulator – free for the PC /MAC. I maintain the unofficial NASA Eyes Facebook page.
Universe Sandbox: a space simulator that merges real-time gravity, climate, collision, and material interactions to reveal the beauty of our universe and the fragility of our planet. Includes VR support.
SpaceEngine: a free 3D Universe Simulator for Windows. Steam version with VR support available.
Stellarium: a free open source planetarium app for PC/MAC/Linux. It’s a great tool for planning observing sessions. A web-based version of Stellarium is also available. A new version of Stellarium has been released: