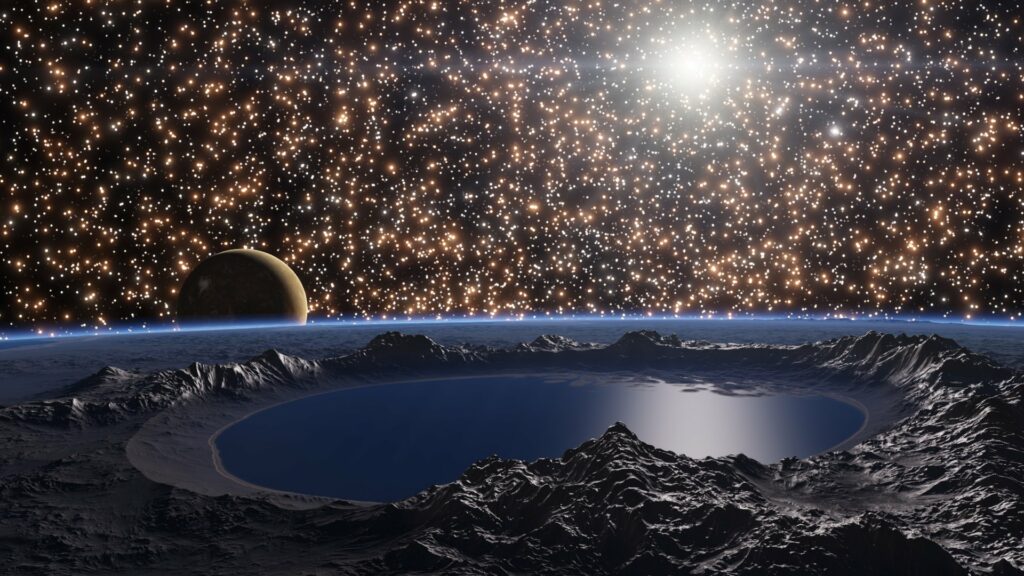 Mars is now half-way across the southeastern predawn sky from Saturn and Jupiter, and is getting farther away from the pair with each day. 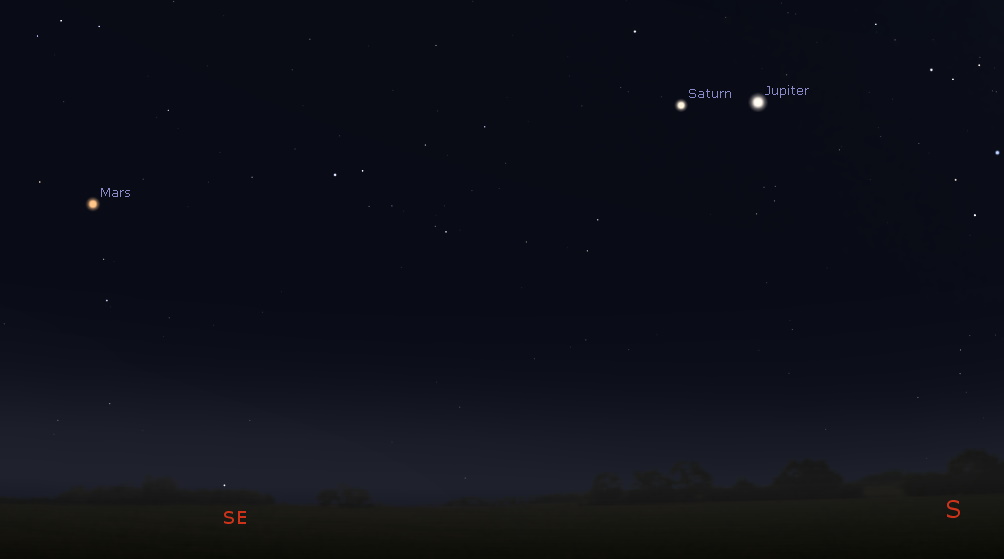 Mercury and Venus appear low on the northwestern horizon at sunset – the crescent Moon appears near the star Pollux on May 26th. 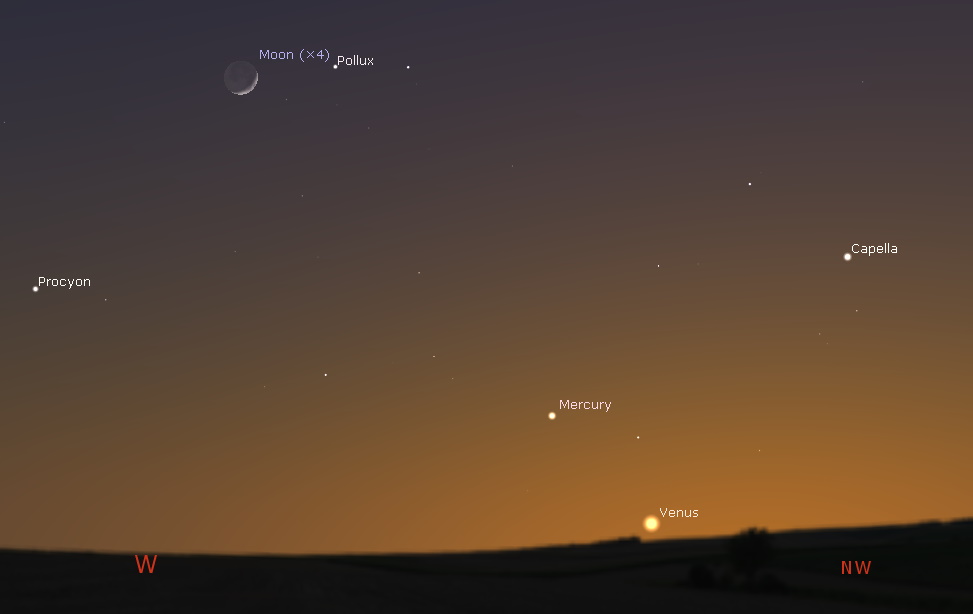 The waxing crescent Moon appears near the star Pollux in the western sky at sunset on May 26th; Mercury and Venus appear low on the horizon this week. Credit: Stellarium / Bob Trembley.

The Moon appears the star Regulus high in the west-southwestern sky after sunset on May 28 and 29th.

The Moon then appears near the star Spica, high in the southern sky after sunset on June 1st. 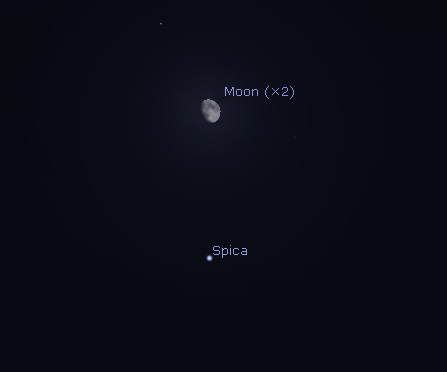 The Moon appears near the star Spica on June 1st high in the southern sky at 10:00 PM. Credit: Stellarium / Bob Trembley.

Asterisms galore in the east-northeastern sky at midnight this week: the Summer Triangle, the Northern Cross and the Mini-Cassiopeia – which I didn’t know was a thing… now I’ll have to go look for it! 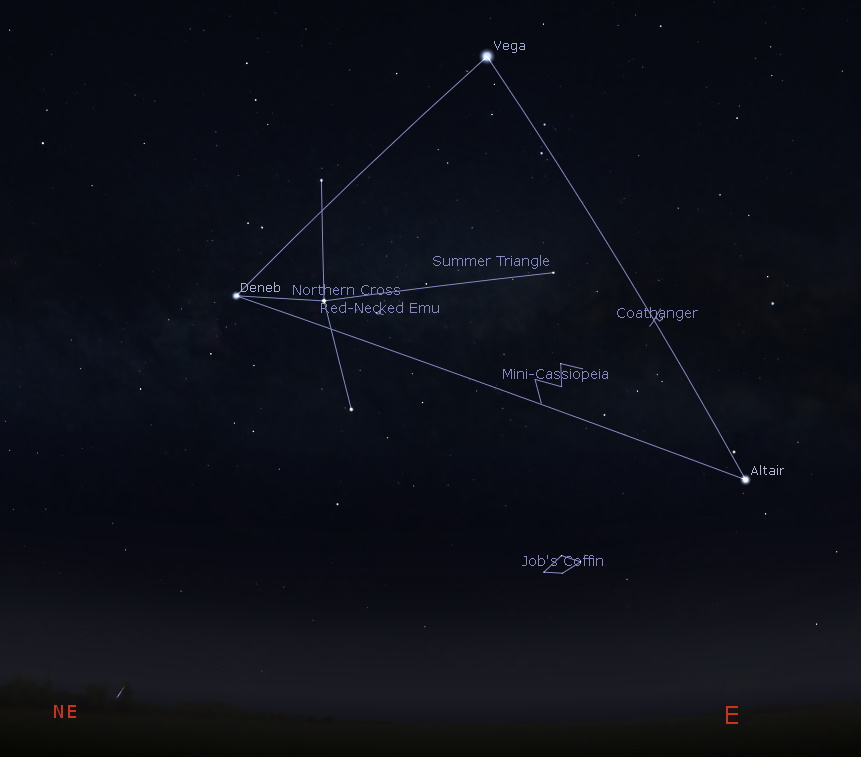 Asterisms in the east-northeastern sky at midnight this week. Credit: Stellarium / Bob Trembley.

The first quarter Moon occurs on Friday May 30th – visible high in the southern sky in the early evening.

After May 30th, the Moon will be a waxing gibbous – visible to the southeast in early evening, and up for most of the night.

The Sun has been spot-free for 24 days, apparently those 2 active regions rotating into view last week never developed into spots. Coronal loops from one of those regions are still visible in the videos below. The northern coronal hole remains open, but smaller than last week – the hole at the south pole is very large.

Beautiful, large, long-lived prominences on the Sun over the last few days! 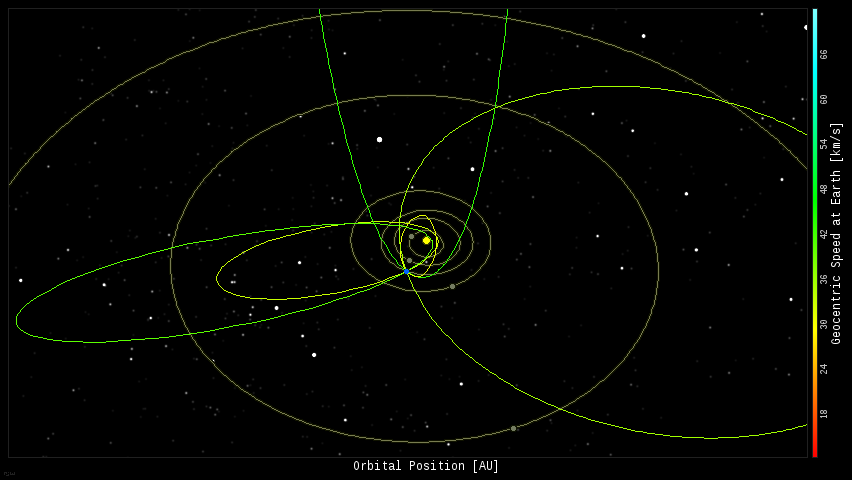 The American Meteor Society had 124 fireball reports from right around midnight. The reports came in from WA, ID, OR, MT and Alberta. Loni Grant captured this quick flash of light near Pablo.
Check your cameras if you have anything good, upload it at https://t.co/qD1dielwRC pic.twitter.com/trwxhOyueW

American Meteor Society approved 63 eyewitness reports about a fireball seen over Alberta, British Columbia, ID, MT, OR and WA on Friday, May 22nd 2020 around 12:47 AM. pic.twitter.com/8WrIraKlM1 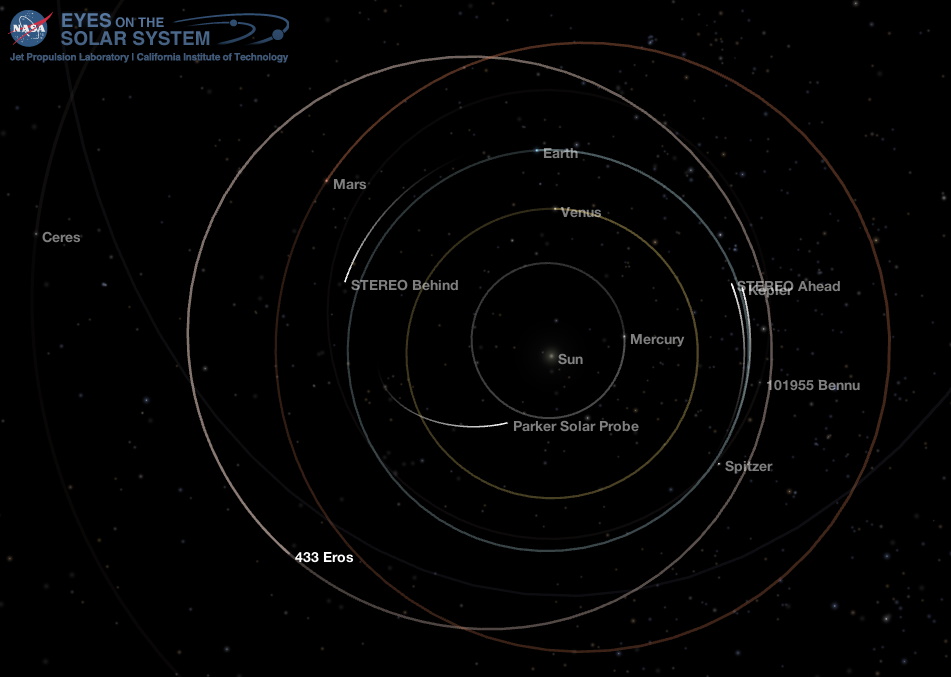 Position of the planets and a couple spacecraft in the inner solar system, 2020-05-26 – the orbit of asteroid Eros is highlighted.. Credit: NASA Eyes on the Solar System / Bob Trembley. 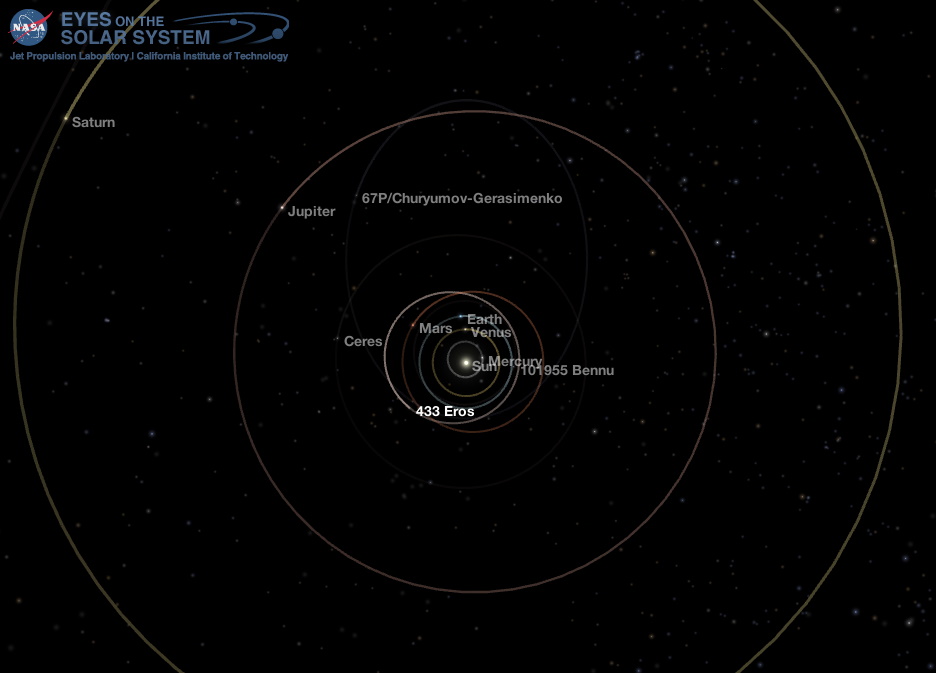 Position of the planets in the middle solar system, 2020-05-26 – the orbit of asteroid Eros is highlighted. Credit: NASA Eyes on the Solar System / Bob Trembley. 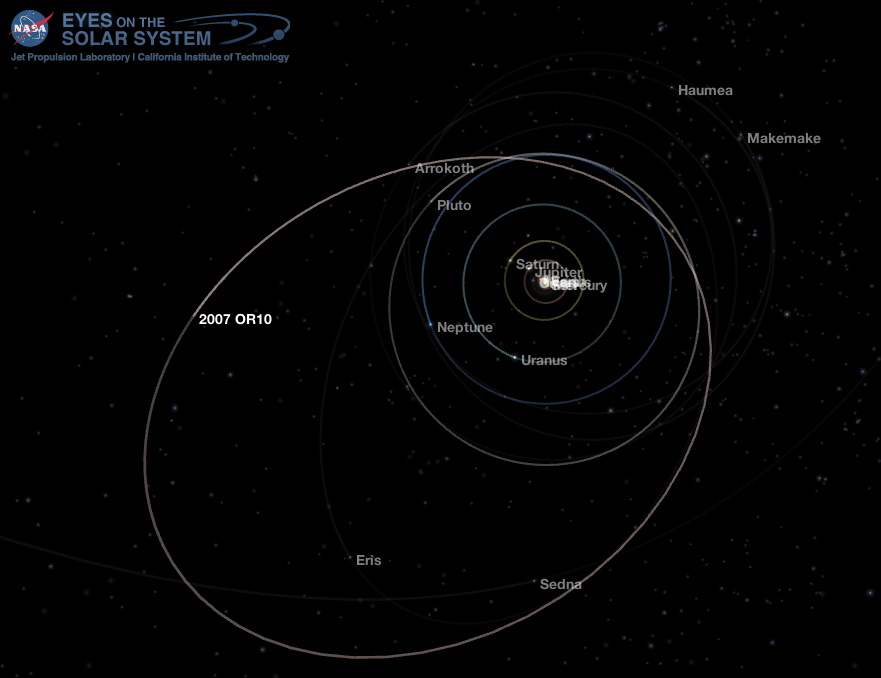 Position of the planets in the outer solar system on 2020-05-26 – the orbit of transneptunian object 2007 OR10 is highlighted. Credit: NASA Eyes on the Solar System / Bob Trembley.

With data from @NASA's @NASANewHorizons spacecraft — and a telescope a lot closer to home — scientists are unraveling the mysteries of Pluto's hazy atmosphere >> https://t.co/ATTrjhyyrJ pic.twitter.com/RiHdlrt6Xi

These images were taken during various mission phases and from various altitudes. The same boulder is pictured in all 3 images, but the details come into focus as we get closer to asteroid Bennu. pic.twitter.com/uWQFDYNBoG

On the @Space_Station, 10 EXPRESS Racks help keep @ISS_Research up and running — and after Wednesday's @JAXA_en launch, one more is on its way >> https://t.co/oTTCFqZM89 pic.twitter.com/EbRItvqT9A

This amazing image taken by @NASAHubble was only possible thanks to Nobel Laureates George Smith, born on this day in 1930, and Willard Boyle who invented the CCD sensor.

Kennedy Space Center's Launch Complex 39 has been the site of space history. The Crew Dragon spacecraft will launch from historic Pad 39A, the same launch pad that sent our first astronauts to the Moon. Explore the history of LC-39 in a new blog: https://t.co/5uCVxhYl7e
?: NASA pic.twitter.com/j20QPPC0j3

A new era of human spaceflight begins this week ?

Today, our #LaunchAmerica mission passed its final major review & teams received the “go” to proceed toward launch on May 27. @AstroBehnken & @Astro_Doug will fly aboard @SpaceX's Crew Dragon spacecraft: https://t.co/BeSFgRAEZn pic.twitter.com/4Vqu68pV0e

We love a good challenge. Kerbonauts, show us your skills! ? pic.twitter.com/c5gGfixlkW

Everybody excited for #CrewDragon #DM2 next week? I already flew the mission in @KerbalSpaceP where my monster ISS meets the @SpaceX capsule.#LaunchAmerica

It's hard to "see" sea level rise by just looking at the ocean, but its effects are very real. A new video covers some of the basics.

Want to go backward and forward in time? Enter our Climate Time Machine to see how some of Earth's key climate indicators have changed over the years. https://t.co/yvItokRB1D pic.twitter.com/HxDyyWrAY5 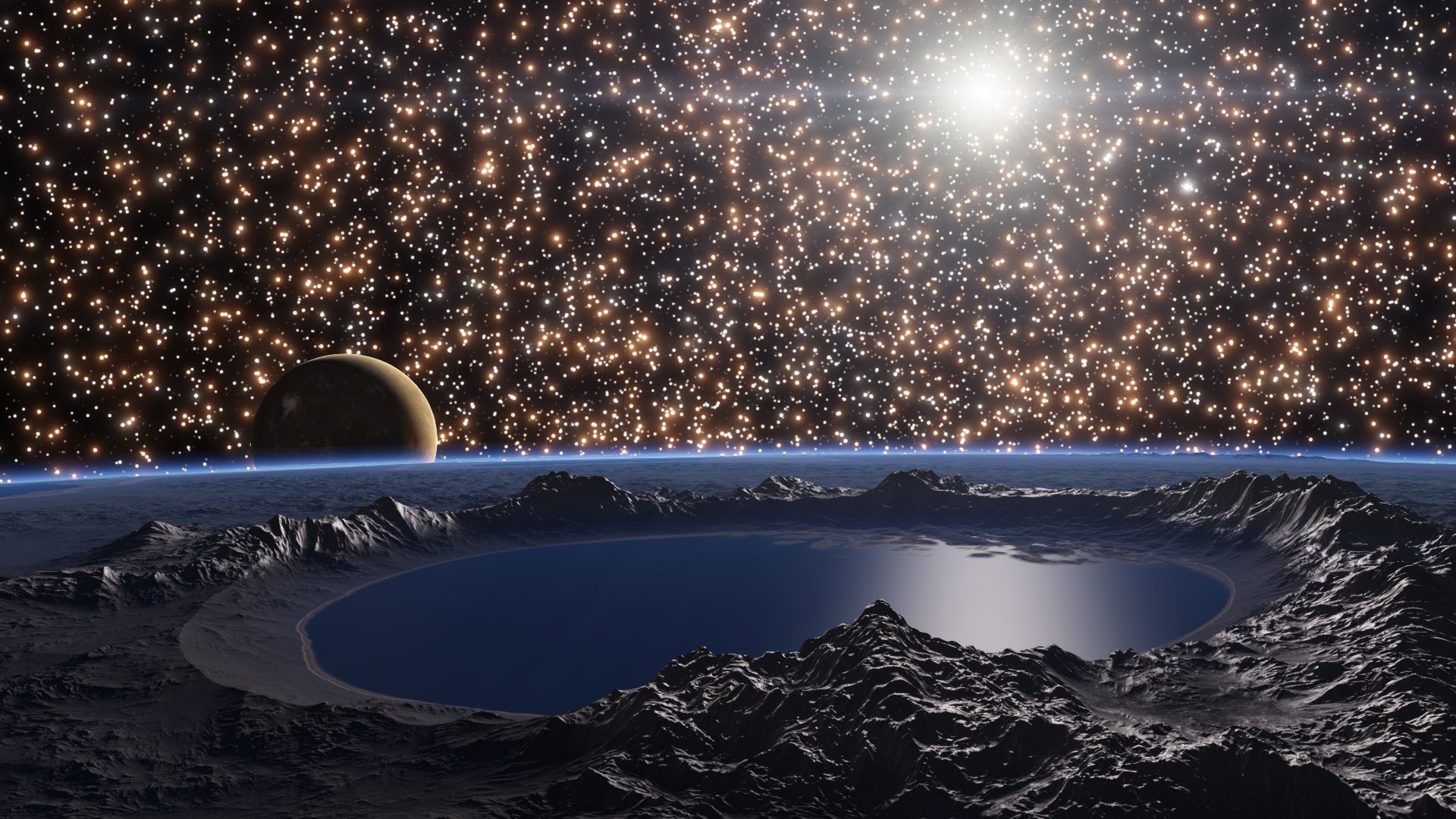 Artist’s concept of a crater lake on a body in a globular star cluster. Credit: SpaceEngine / Hap N Stance on Twitter.

Meet the next judge for our #CaptureTheDark Photo Contest: @AngryTheInch. Fortunate to live in the subarctic where #northernlights light up the night, Mia’s photos more often than not feature those magical lights in the sky.
Learn more at https://t.co/ECf8zAi01K
?: @AngryTheInch pic.twitter.com/8mDzM9sbR7

Continuing with my visual tour of nearby stars and their systems, we travel to the Groombridge 34 star system, 11.6 light years distant.

Distance to Groombridge 34 from Sol; the plane (green) is aligned with the orientation of the plane of the Milky Way galaxy. Credit: SpaceEngine / Bob Trembley.

Groombridge 34 [Gliese 15 / SAO 36248 / HIP 1475 / HD 1326] is a binary star system in the northern constellation of Andromeda. It was listed as entry number 34 in A Catalogue of Circumpolar Stars, published posthumously in 1838 by British astronomer Stephen Groombridge. Based upon parallax measurements taken by the Gaia spacecraft, the system is located about 11.6 light-years from the Sun. This positions the pair among the nearest stars to the Solar System.

Both components are small, dim red dwarf stars that are too faint to be seen with the naked eye. They orbit around their common barycenter in a nearly circular orbit with a separation of about 147 AU and a period of around 2,600 years. Both stars exhibit random variation in luminosity due to flares and they have been given variable star designations: the brighter member Groombridge 34 A is designated GX And, while the smaller component is designated GQ And.

The star system has a relatively high proper motion of 2.9 arc seconds per year, and is moving away from the Solar System at a velocity of 11.6 km/s. It achieved perihelion some 15,000 years ago when it came within 11 ly (3.5 pc) of the Sun. – Wikipedia 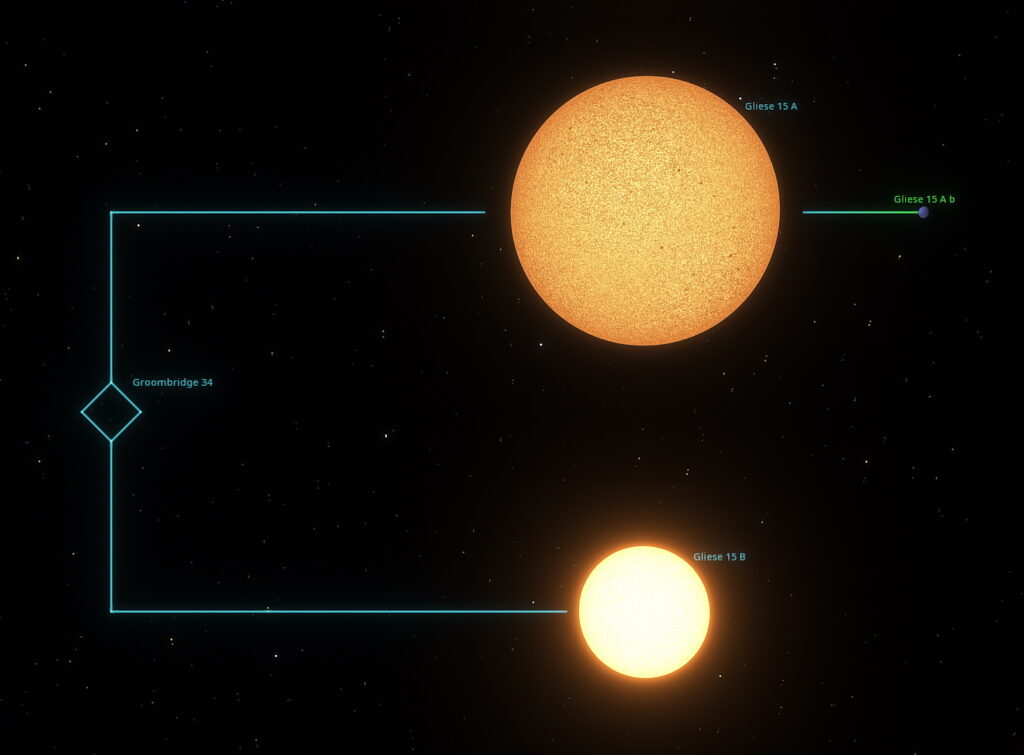 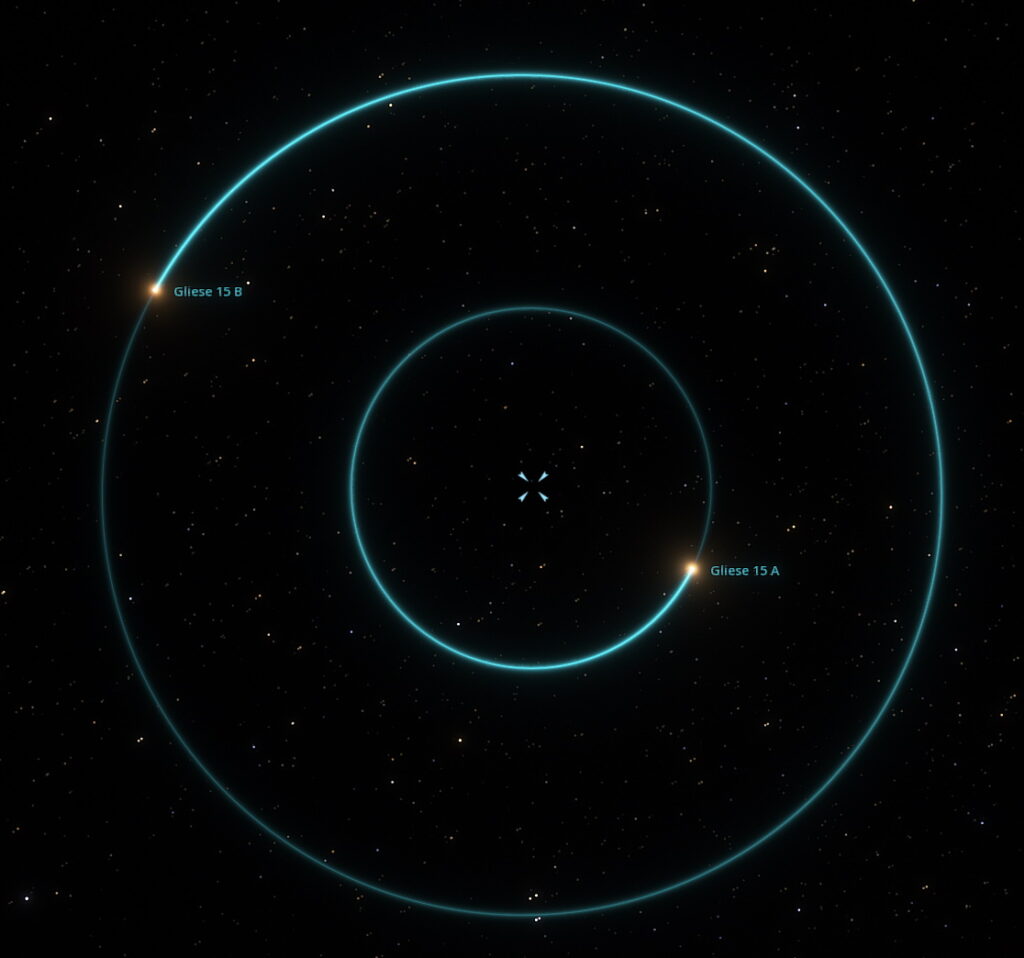 Top-down view of the orbits of the stars in the Groombridge 34 star system – the system barycenter is highlighted. Credit: SpaceEngine / Bob Trembley.

In August 2014, a planet orbiting around Groombridge 34 A was reported. The planet’s existence was deduced from analysis of the radial velocities of the parent Star by the Eta-Earth Survey using HIRES at Keck Observatory. At the time of its discovery, it was the sixth-nearest known exoplanet.

Using the CARMENES spectrograph combined with the measurements of the HARPS and HIRES spectrographs, researchers failed to detect the purported Groombridge 34 Ab. However, they did propose another that another planet (Groombridge 34 Ac, GJ 15 Ac) could be orbiting the parent star.

This discrepancy was later reconciled with new HIRES observations, covering a longer span of time, where both planets were recovered, constraining their minimum mass to 3.03 M⊕ for Groombridge 34 Ab and 36 M⊕ for Groombridge Ac. Their orbital periods are 11.4 and approximately 7,600 days, respectively. To date, this is the multi-planet system closest to our Sun, hosting the longest period Neptune mass planet discovered so far. – Wikipedia 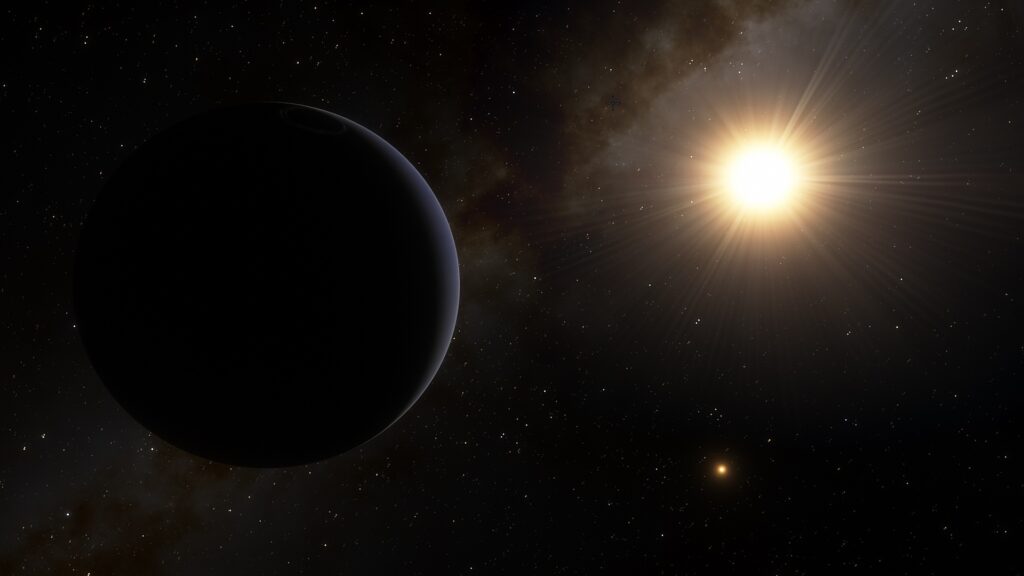