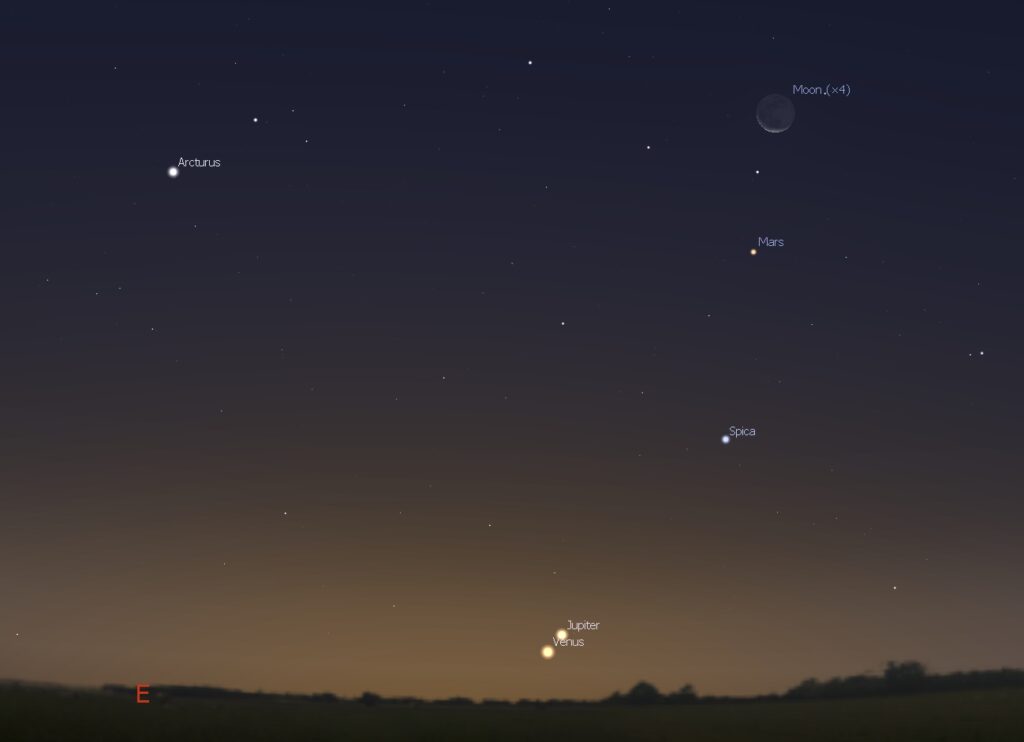 The multi-day conjunction of Jupiter and Venus in the southeastern predawn sky continues for the next couple days, and will be joined by a waning crescent Moon on the mornings of the 14th– 17th.

For an observing challenge, see if you can spot the 1% illuminated Moon near Venus and Jupiter on the morning of the the 17th … here’s hoping for Earthshine! 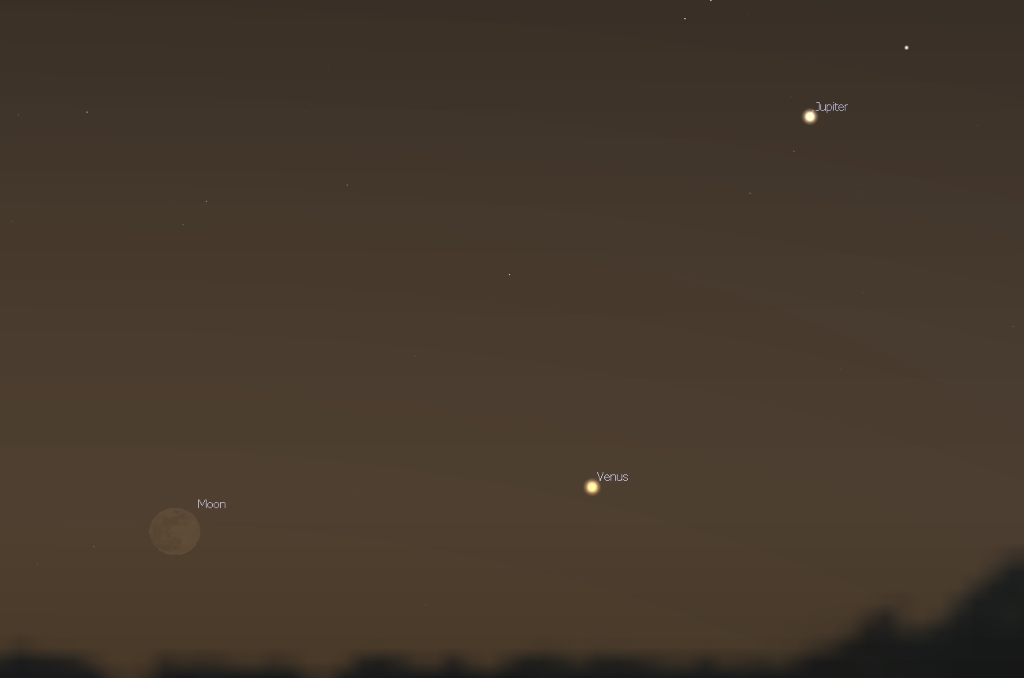 Orion, Taurus and the Pleiades are in the western sky before sunrise. 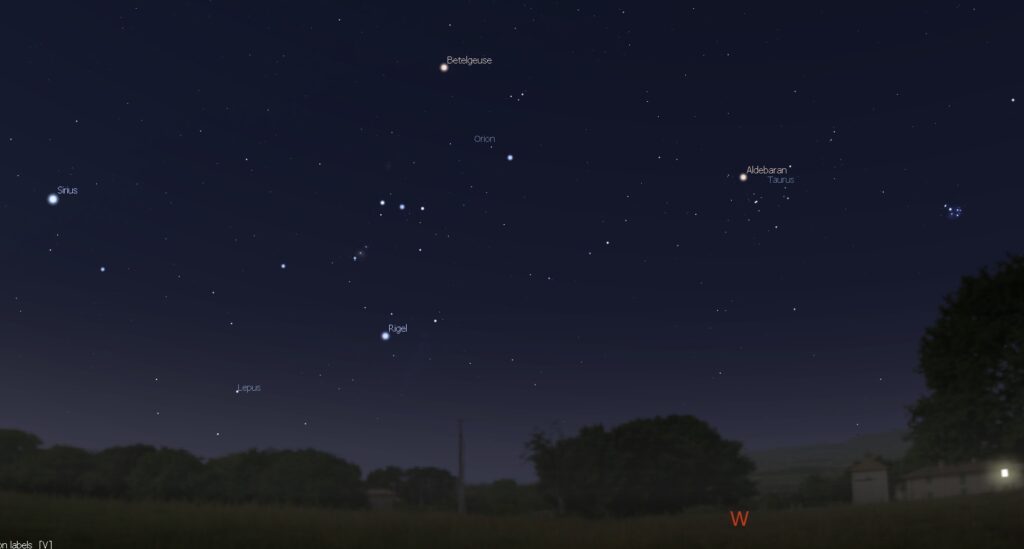 Perseus, Cassiopeia and Cepheus are to the north before sunrise – see if you can spot them!

Saturn is just above the treetops to the southwest after sunset, and is only visible for about a half hour before it sets. 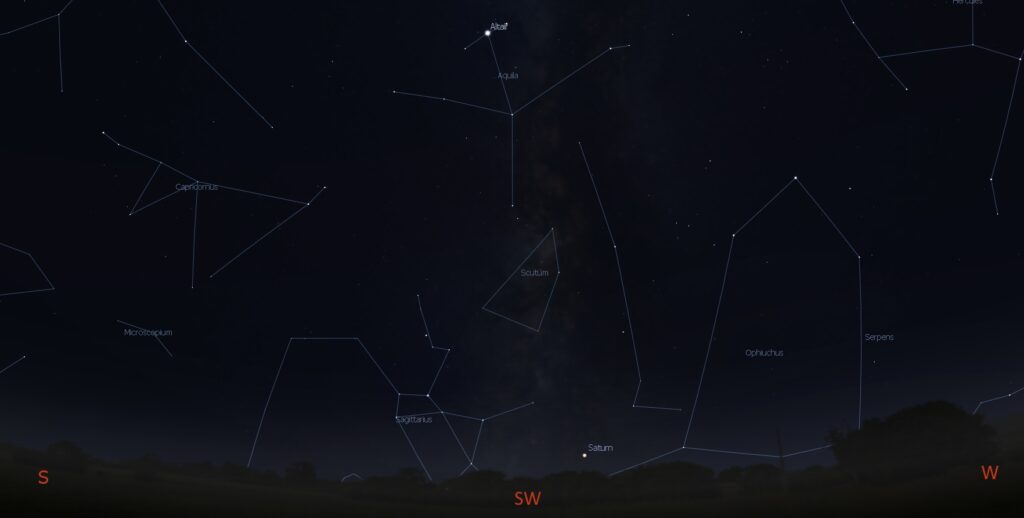 After nearly 2 weeks of spotless days, a small active region makes an appearance on the western limb of the Sun. 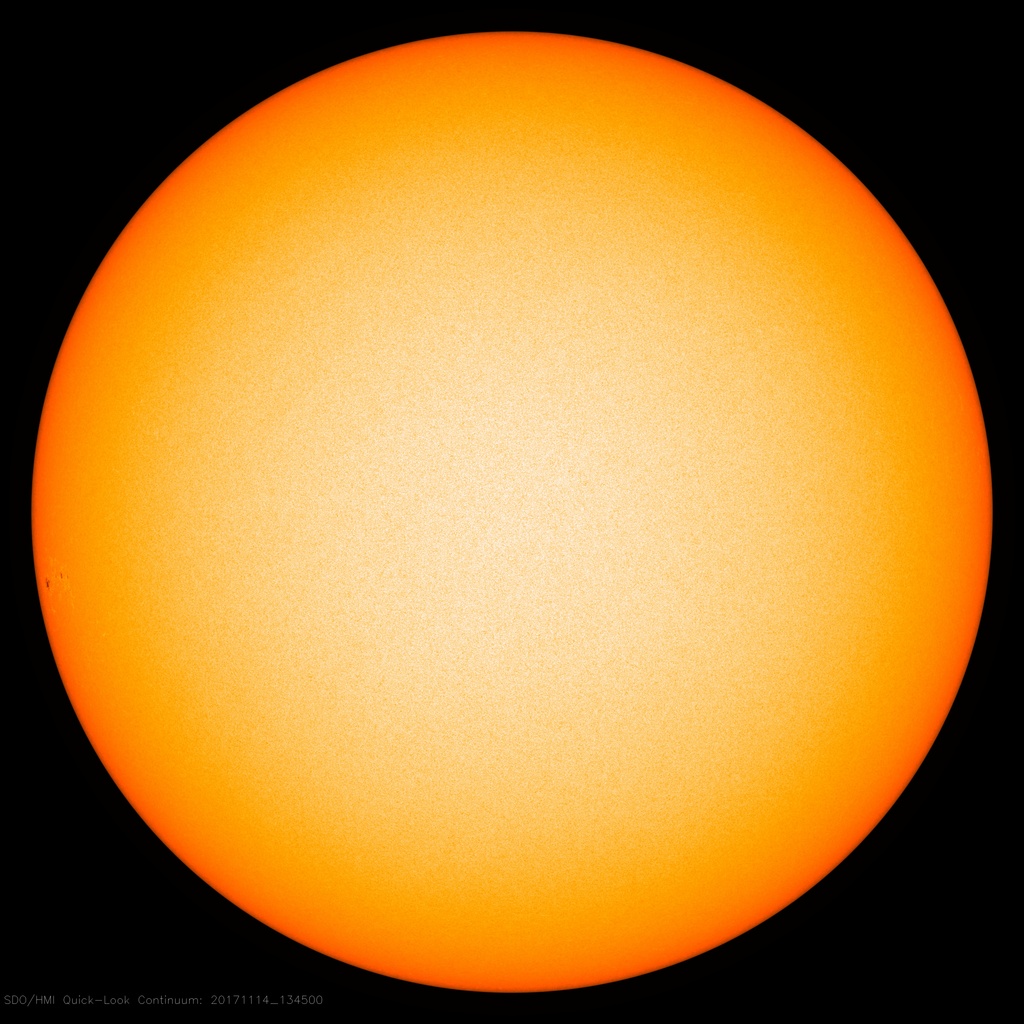 The view from the Solar Dynamics Observatory) in 304 angstroms shows several prominences on the Sun’s limb, and a bright spot on the western limb, where the active region resides. 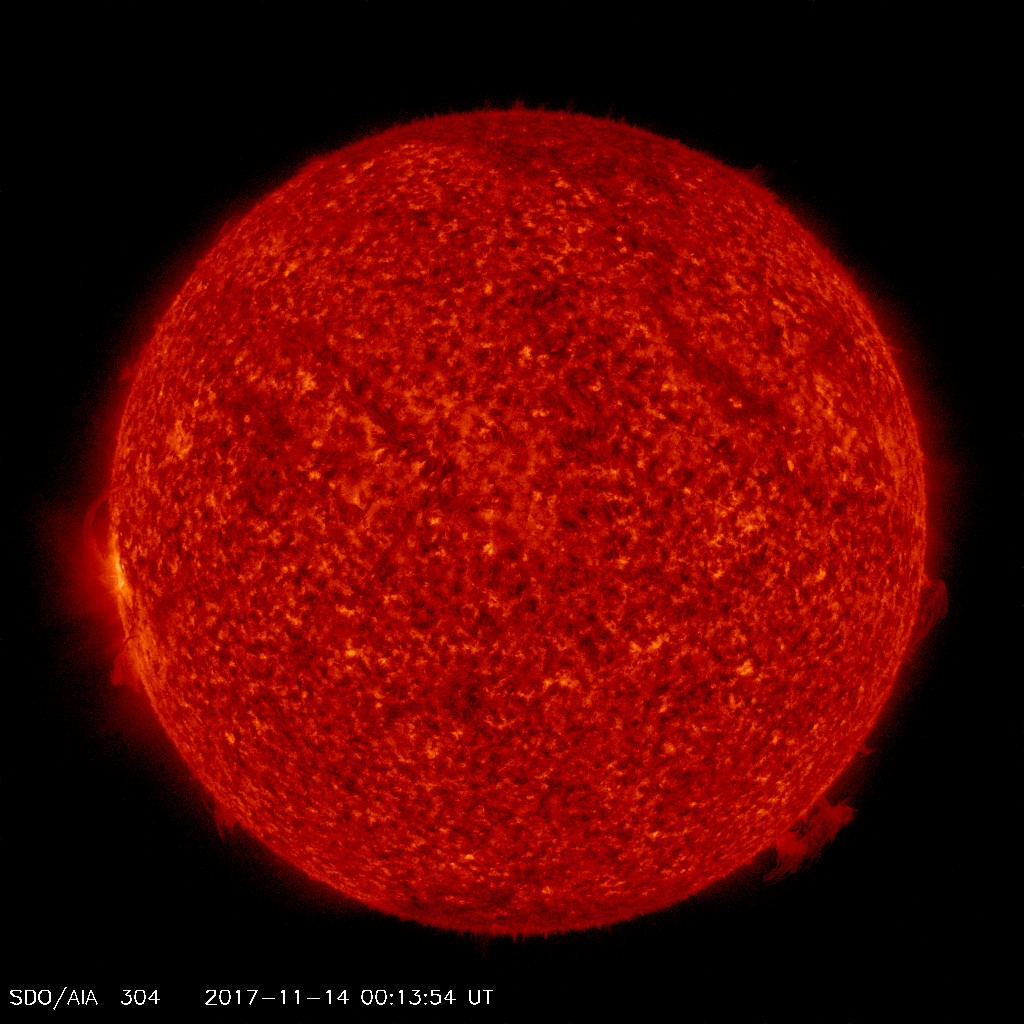 The Sun in 304 angstroms showing several prominences – Nov. 14, 2017. Image courtesy of NASA/SDO and the AIA, EVE, and HMI science teams.

The northern coronal hole has a peninsula reaching far to the south, and is joined by another coronal hole in the south reaching northward. SpaceWeather.com says: “Later today, Nov. 14th, a co-rotating interaction region (CIR) might hit Earth. CIRs are transition zones between slow- and fast-moving solar wind streams. They contain plasma density gradients and intense magnetic fields that often do a good job sparking auroras. NOAA forecasters say that G1-class geomagnetic storms are possible on Nov. 14-15 after the CIR arrives.” 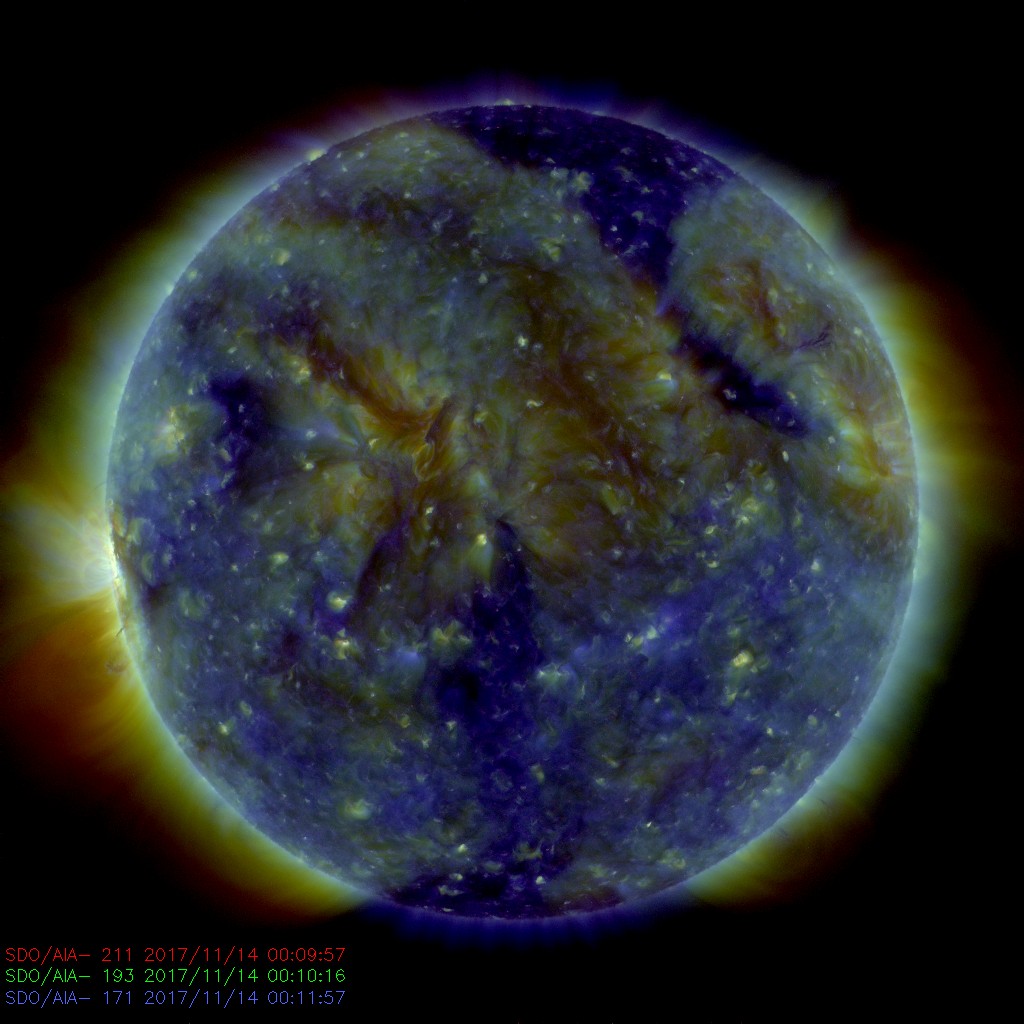 This is the position of the planets in the inner solar system using NASA Eyes on the Solar System. 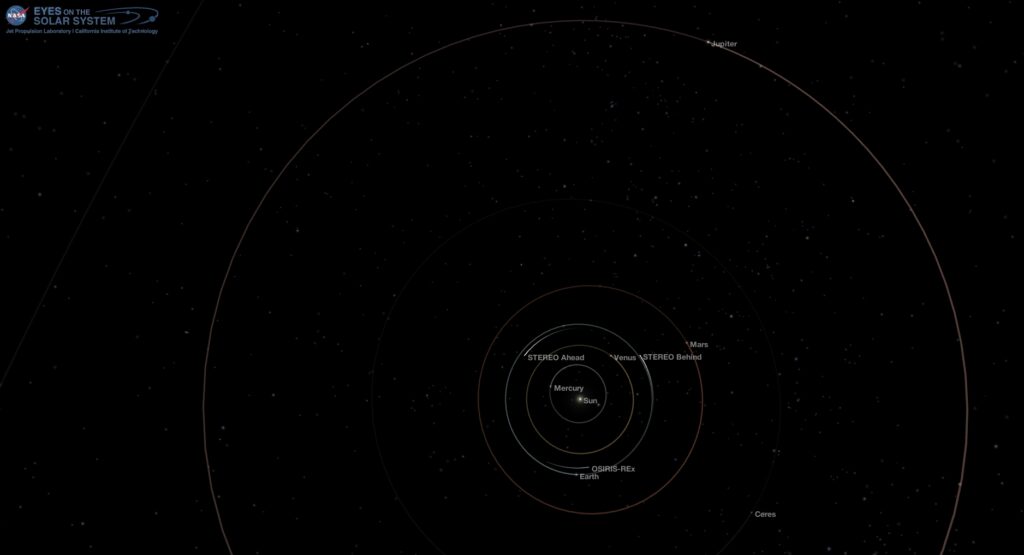