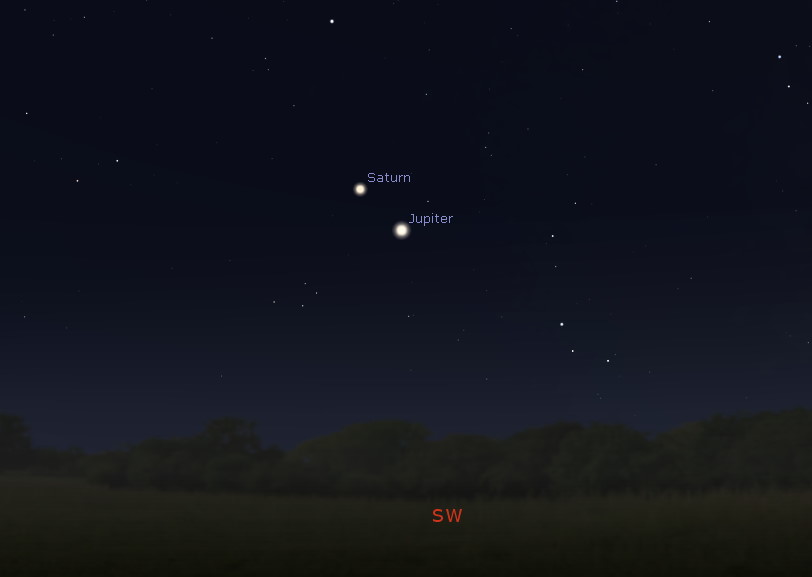 Jupiter and Saturn appear in the southwestern sky at dusk, getting closer together with each passing evening.

Mercury and Venus appear in the east-southeastern predawn sky all week – Mercury may be difficult to spot this week being so near the horizon. 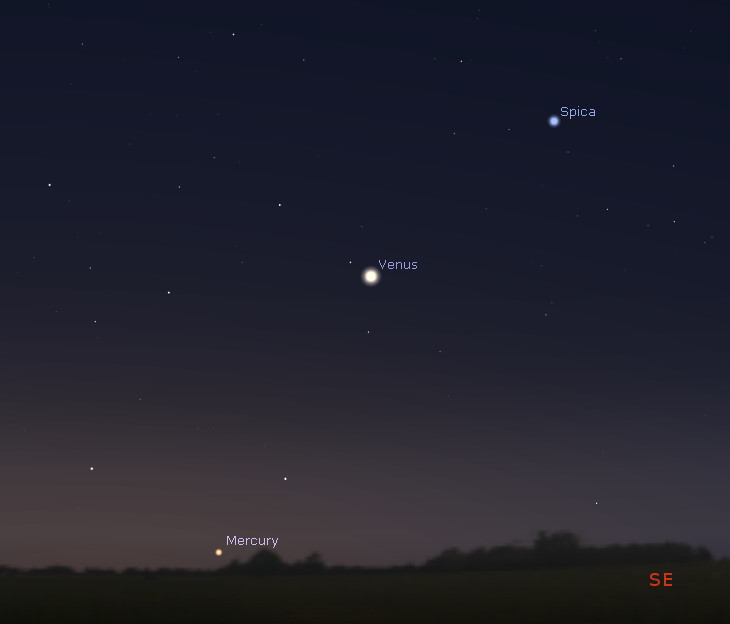 Mars appears high in the southeastern sky after sunset – the waxing gibbous Moon appears near Mars on Nov. 25th 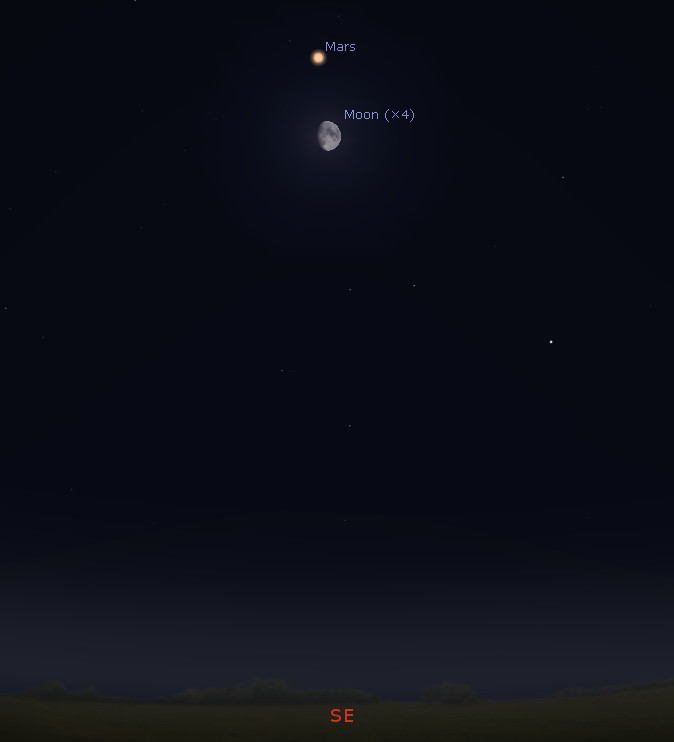 The constellations Orion and Taurus appear in the eastern sky a few hours after sunset, and move across the southern sky to appear in the western sky before sunrise.

The full Moon occurs on Nov. 30th – it rises at sunset, is visible high in the sky around midnight, and is visible all night. 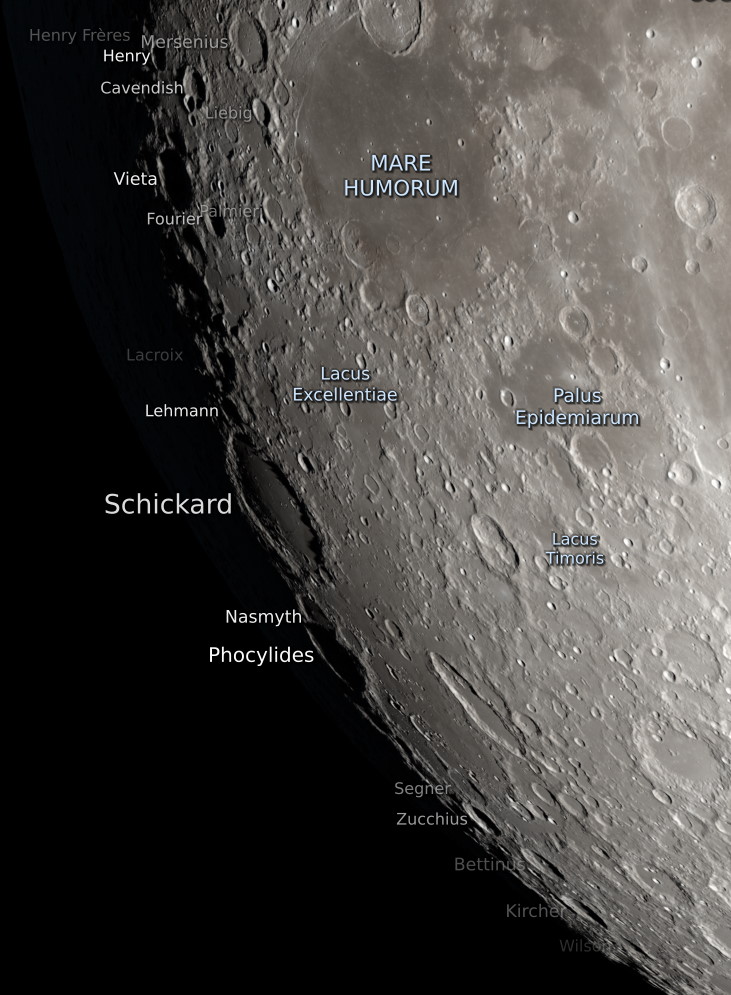 Annotated close-up of a section of the Moon on Nov. 27th. – showing the play of shadows along the terminator. Visualizations by Ernie Wright / NASA’s Scientific Visualization Studio.

And for those of you in the Southern Hemisphere, check out this video! #MoonCrushMonday https://t.co/69XFEJSPtn pic.twitter.com/8C77bkxff8

NASA installed a developmental RS-25 engine into the test stand at Stennis. This engine will be used in an upcoming test series to gather data and evaluate new components for development and production of new RS-25 engines for future #Artemis missions. pic.twitter.com/pFFaJXgwKY

The Sun has 3 active sunspots! This is the most at one time for this sunspot cycle – all three of these sunspots are relatively large, and pose a threat for C-class solar flares.

There are several regions of coronal activity across the Sun’s face – 3 regions in the southern hemisphere associated with the sunspots, and one in the northern hemisphere that has no spot.

The northern coronal hole, remains ginormous, with tendrils stretching almost to the equator; the coronal hole at the south pole remains small.

Lots of prominence activity over the last couple days; keep your eye on the lower left of the Sun’s face in the video below – the last second has something exciting happening!

WOW! The region of interstellar space that the Sun is embedded has a much higher concentration of hydrogen than previously thought!

Pickup ions — interstellar atoms that drift into our heliosphere & mix with the solar wind — carry clues about space beyond our solar system. A new study of pickup ions suggests nearby interstellar space has about 40% more hydrogen than previously thought. https://t.co/gNjxoWPxU1 pic.twitter.com/sxAuErd0TV 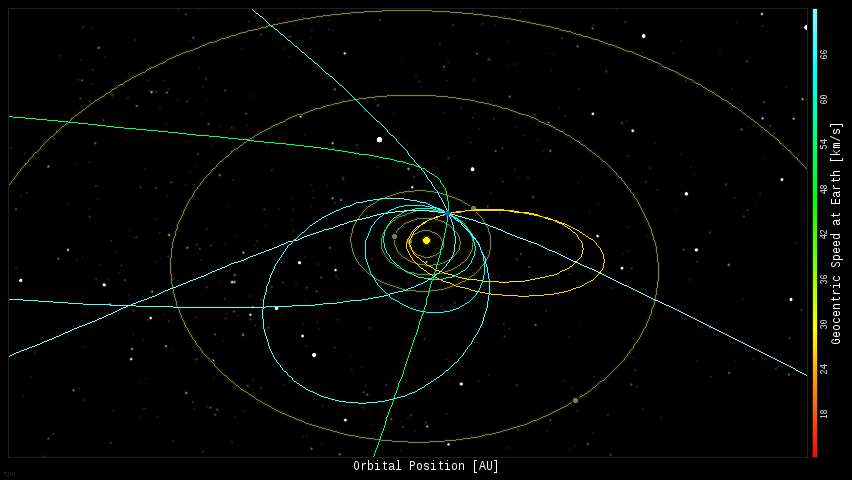 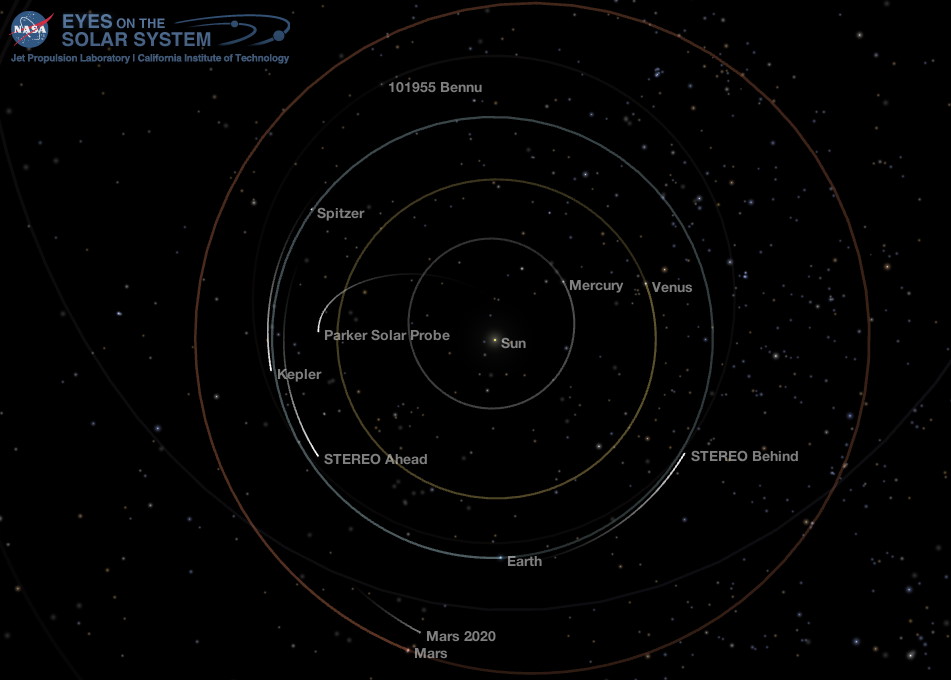 Position of the planets and a couple spacecraft in the inner solar system, 2020-11-24. Credit: Bob Trembley / NASA Eyes on the Solar System. 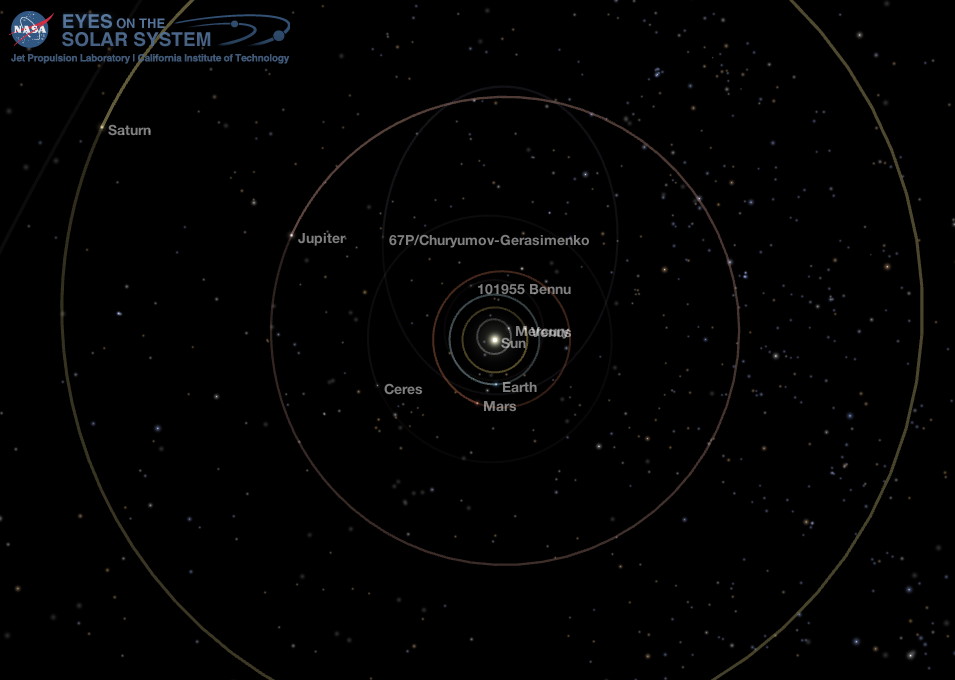 Position of the planets in the middle solar system, 2020-11-24. Credit: Bob Trembley / NASA Eyes on the Solar System. 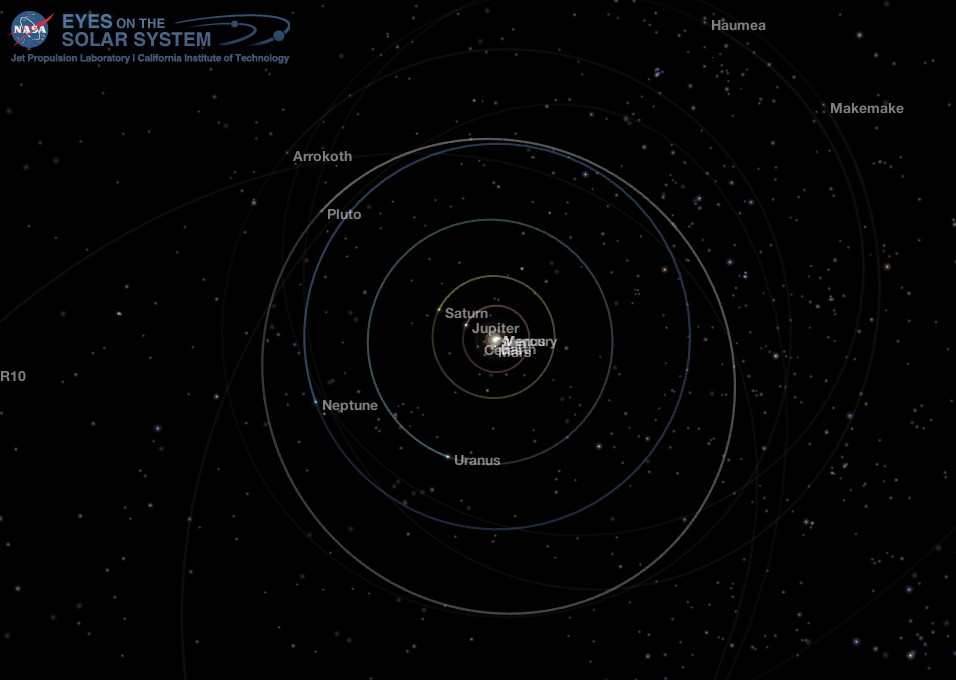 Position of the planets and some transneptunian objects in the outer solar system, 2020-11-24. Credit: Bob Trembley / NASA Eyes on the Solar System.

A Dragon spacecraft carrying cargo is scheduled arrive at the International Space Station on Dec. 6, around 11:30 a.m. EST following its launch from @NASAKennedy the day before. ?️ https://t.co/65Gc5g2yaH

With the mole just under the surface, I held up my camera for a better look at the work area. Up next: I’ll scrape some extra soil on top, and press down again to give it another assist.

This is an image of spiral galaxy NGC 3147, captured by Hubble.

⚫️ ? What you can’t see is the supermassive black hole at its center that weighs ~250 million times the mass of our Sun!

Learn more about black holes in this episode of Curious Universe: https://t.co/qREcbwdTG9 pic.twitter.com/EZD5PtyUqH

The Landsat 8 Flight Operations Team has successfully restored the spacecraft to nominal operations & resumed imaging of OLI/TIRS data on November 14, 2020.

Earth's climate is very sensitive to changes in atmospheric carbon dioxide content. Learn just how sensitive and why it's important for everyone. https://t.co/3tbReNlO8j

In 2019, a giant planet and its star were given names for rivers in Alaska that support indigenous and native populations.

The Mulchatna is a tributary of the Nushagak River, much like the planet is bound to its star. https://t.co/J9ROYn8URy#NativeAmericanHeritageMonth pic.twitter.com/hr3k8oIyT3

The Milky Way is filled with planets. Now astronomers have found the first candidate planet in another galaxy. https://t.co/5LzO45q7Vs

My wife and I visited this park in 2009; my daughter and son in-law attended a star party there. 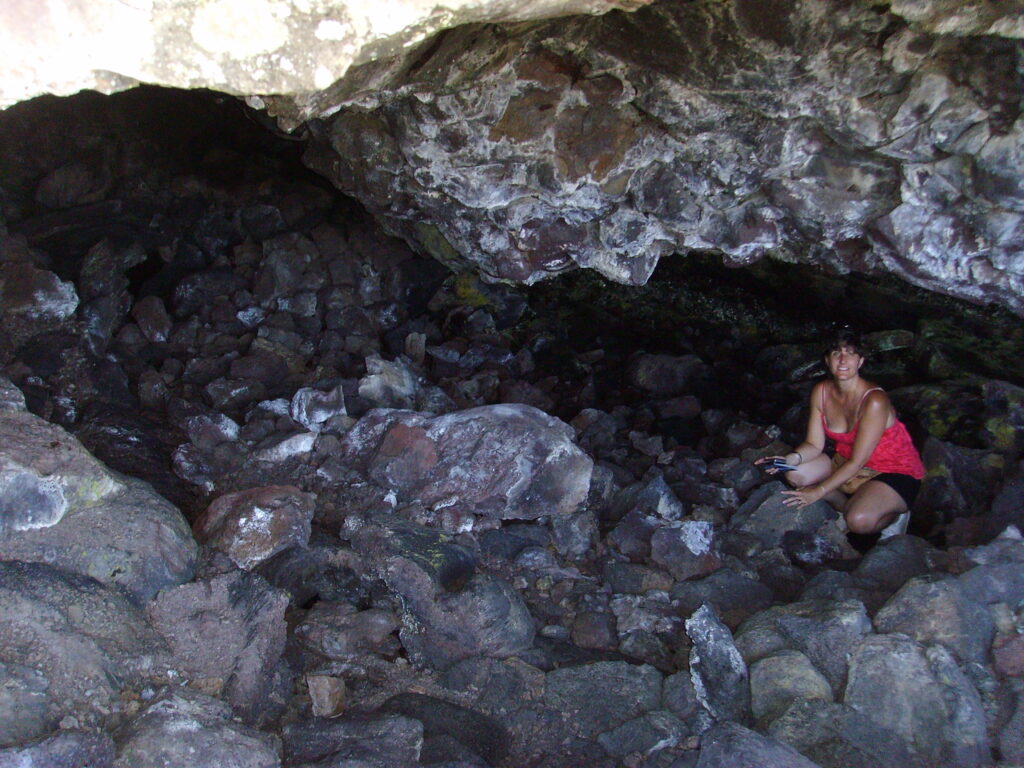 Connie Trembley in a Lava Tube at Craters of the Moon – 2009. Credit: Bob Trembley

ESA/Hubble #Flashback: This image features the star cluster Trumpler 14, one of the largest gatherings of hot, massive and bright stars in the Milky Way.

Continuing with my visual tour of nearby stars and their systems, we travel to DE CVn, about 15.8* light years distant. 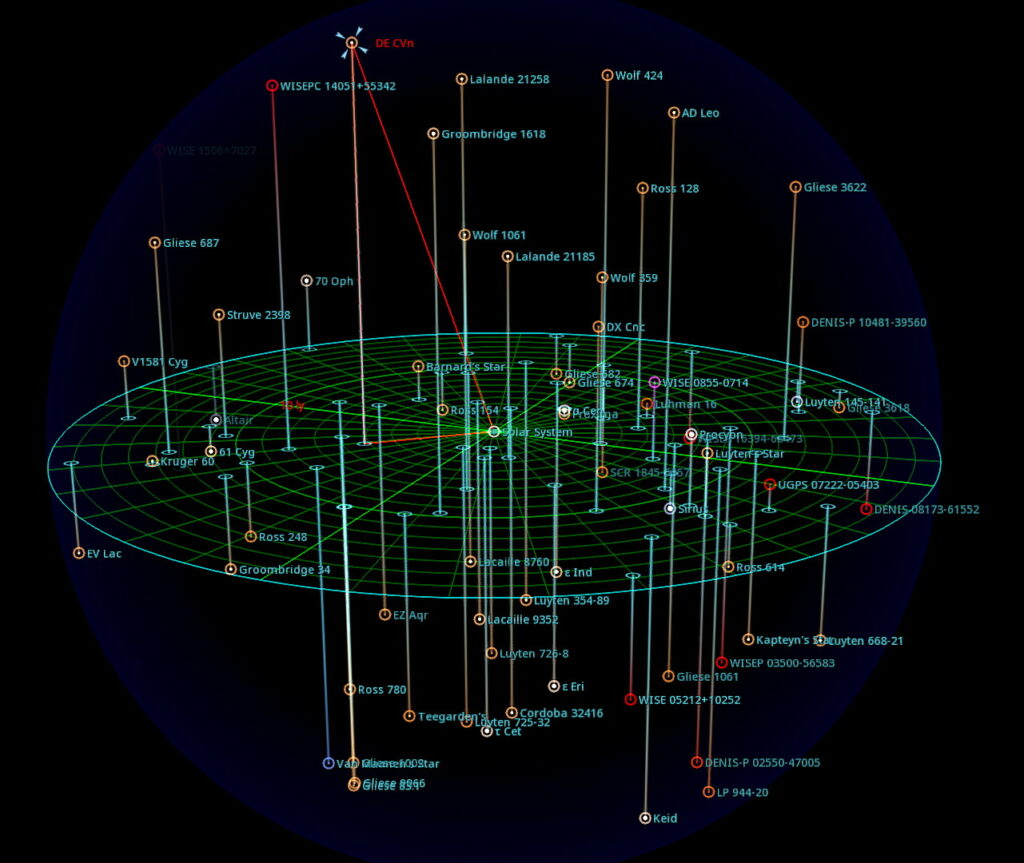 DE CVn is 15.83 light years from Sol; the plane (green) is aligned with the orientation of the plane of the Milky Way galaxy. Credit: SpaceEngine / Bob Trembley.

The system as one confirmed exoplanet orbiting the pair of stars at a distance of 5.75 AU with an orbital period of 11.22 years.

Artist rendering of DE CVn seen from nearby 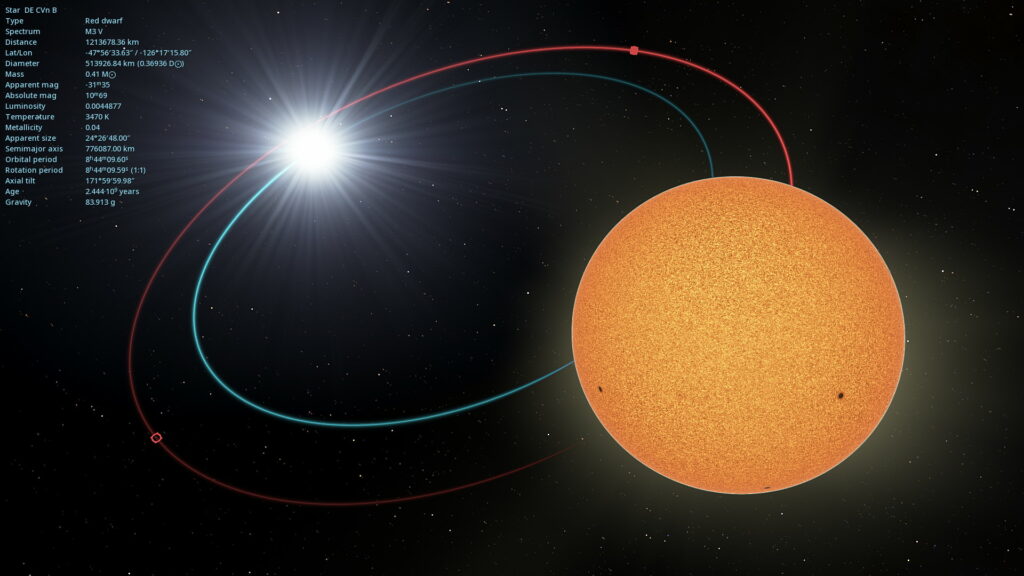 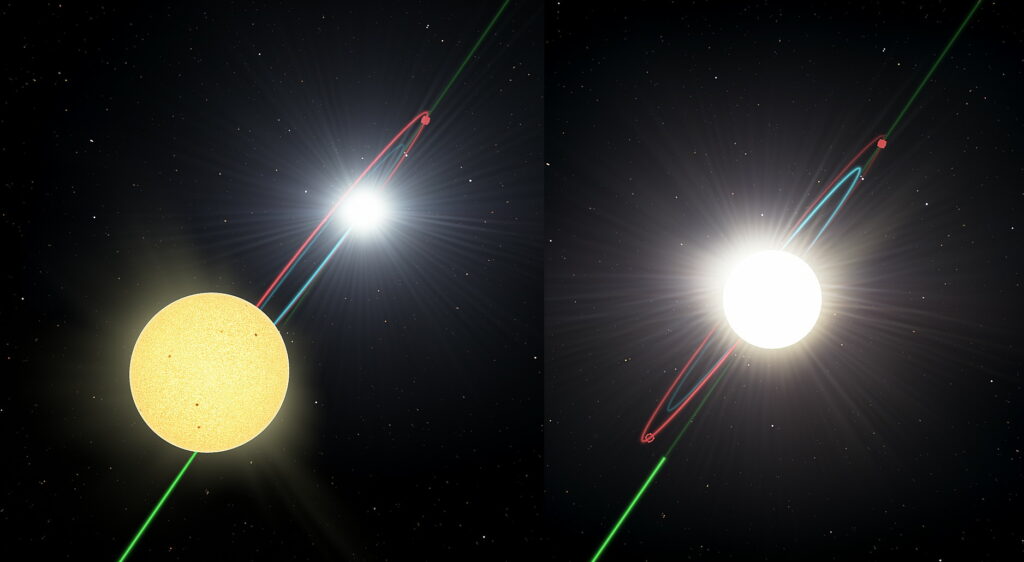 Artist rendering of DE CVn seen from a distance

Seen from a short distance, the two stars seem to merge into one. 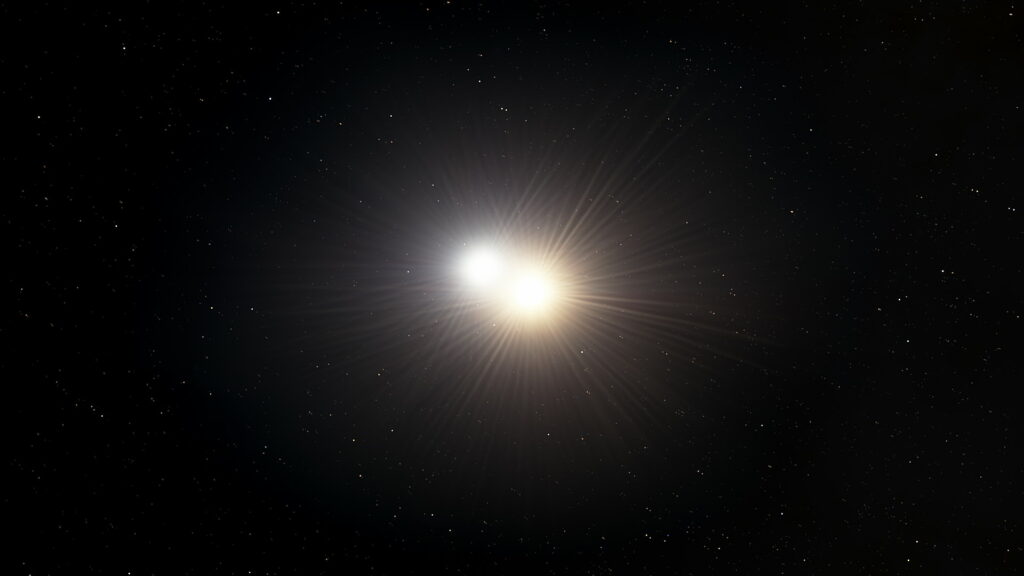 Artist rendering of the gas giant exoplanet DE CVn b 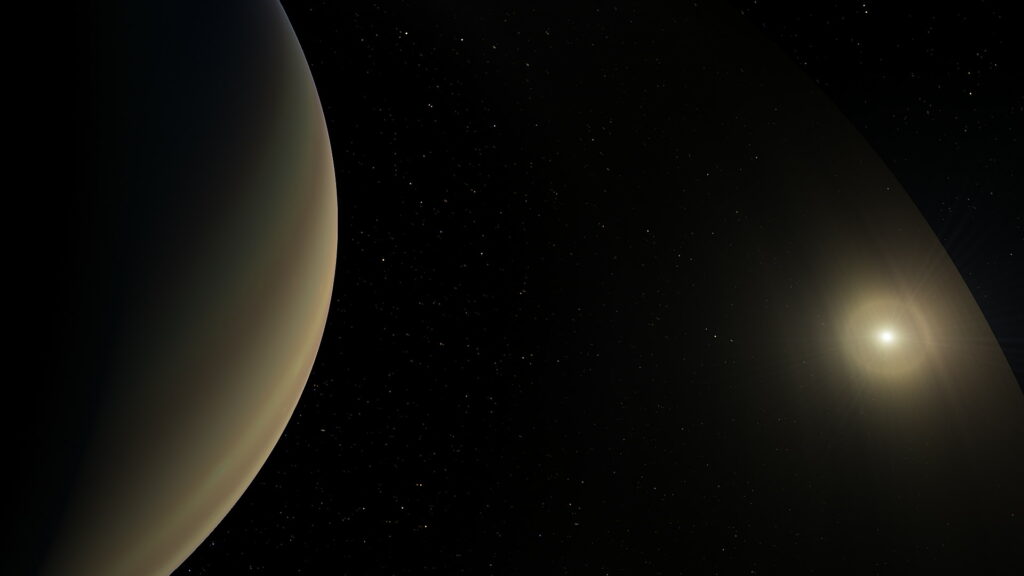