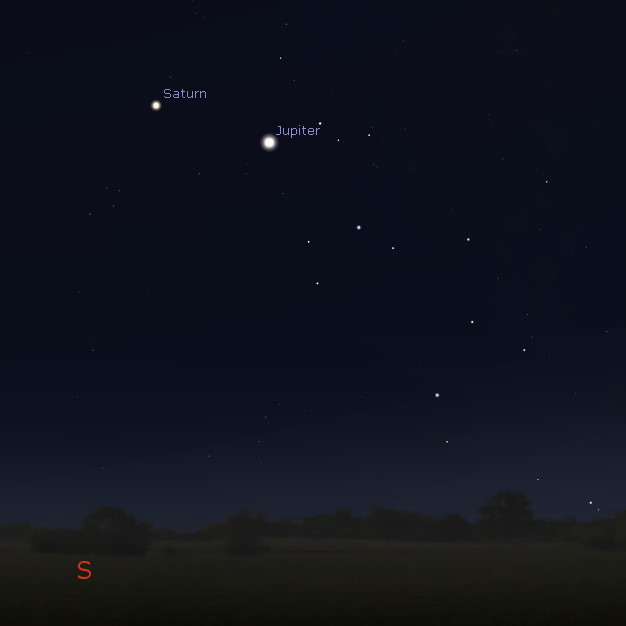 Venus appears in the eastern predawn sky all week; the waning crescent Moon appears near Venus on the mornings of Oct. 13th and 14th.

Saturn and Jupiter appear in the southern sky after sunset.

Saturn and Jupiter appear in the southern sky after sunset, and set in the southwest around midnight. Credit: Stellarium / Bob Trembley.

Mars is at opposition – when it and the Earth are in-line with the Sun; this is also when Mars is closest to the Earth in their orbits, so now is a great time to go observe Mars! 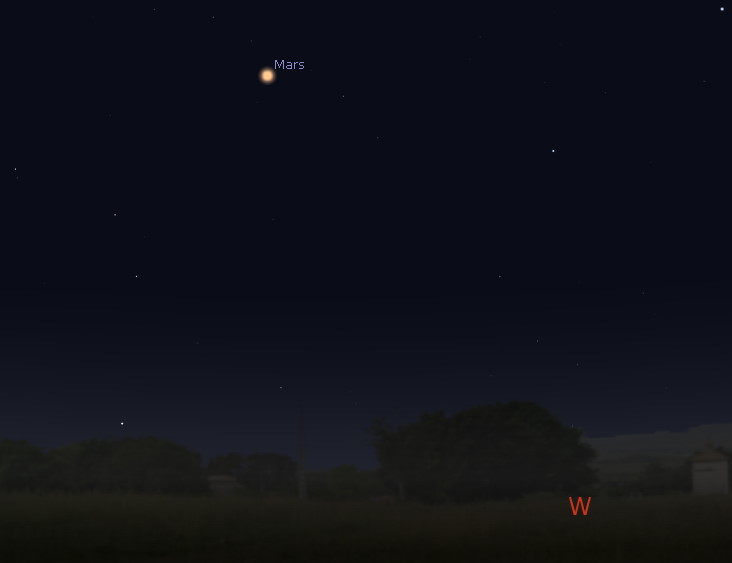 Mars appears in the eastern sky after sunset, is high in the southeastern sky at midnight, and sets in the west with the sunrise. Credit: Stellarium / Bob Trembley.

Here’s a close-up of the Mars opposition: 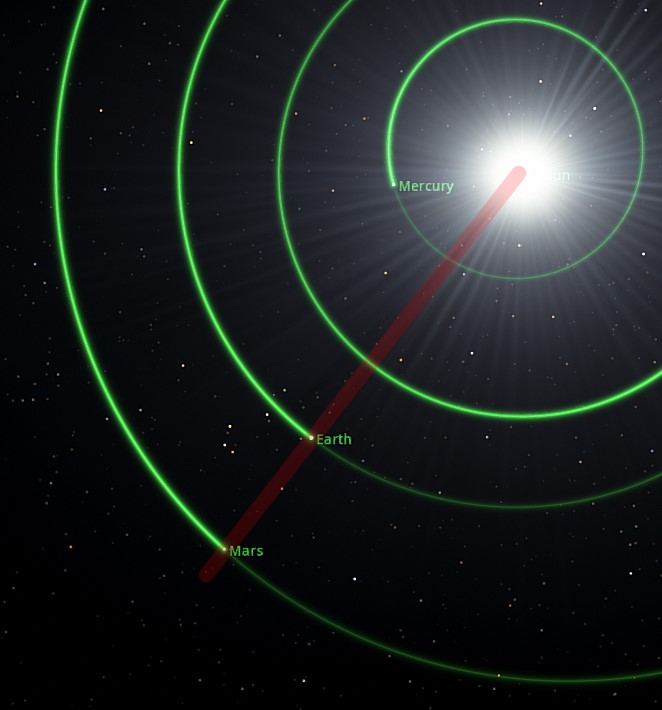 The new Moon occurs on Oct. 16th – the Moon will not be visible at this time… unless it get’s smacked by an asteroid…

The Moon returns to the southwestern sky at dusk as a waxing crescent by early next week.

Annotated close-up of a section of the Moon on Oct. 14th. Visualizations by Ernie Wright / NASA’s Scientific Visualization Studio.

BIG NEWS: #NASA and #JAXA to send Planetary Society-supported sample technology to the Moon and Phobos!

PlanetVac, developed by Honeybee Robotics, is designed to be a reliable, flexible, low-cost sample collection technology.

The Sun has a spot! AR2775 was indicated on SpaceWeather.com, but I could not see it even in the 4K hi-rez image – you can see where it is in the video below, it’s in the lower right, with a lot of coronal loop activity. Large coronal holes are open at both poles. 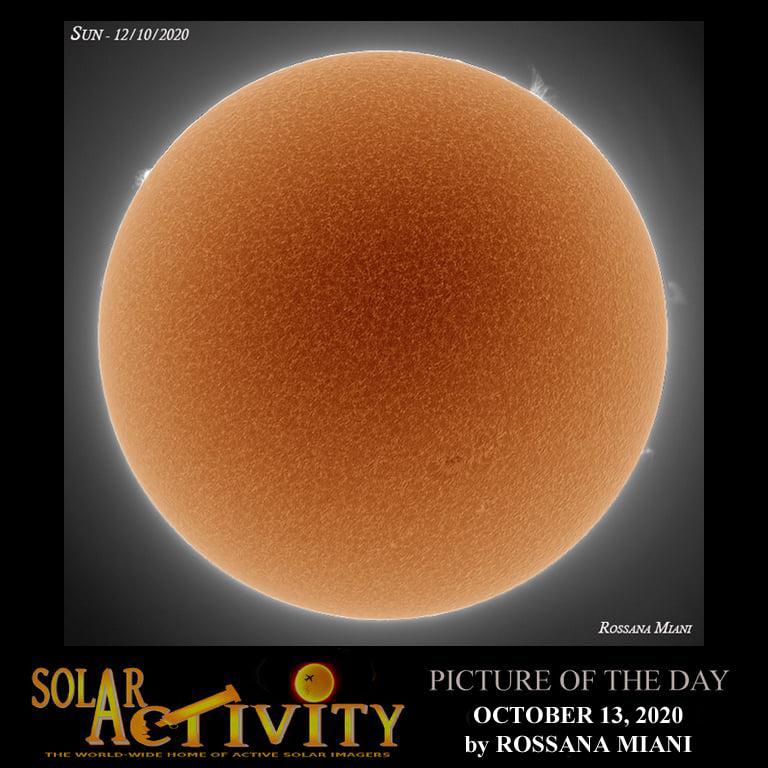 This SUNday, explore how observations of our own star, the Sun, can help us recognize stellar activity on distant stars — and understand whether they might host planets with conditions for life. https://t.co/eciKII3d1f pic.twitter.com/PVA2meyv1a

What looks like an asteroid that is expected to be pulled into Earth's orbit next month in fact may be an old rocket from a failed 1966 moon-landing mission, NASA’s leading asteroid expert says. The object is not expected to hit Earth. https://t.co/8sbCIFPU3B 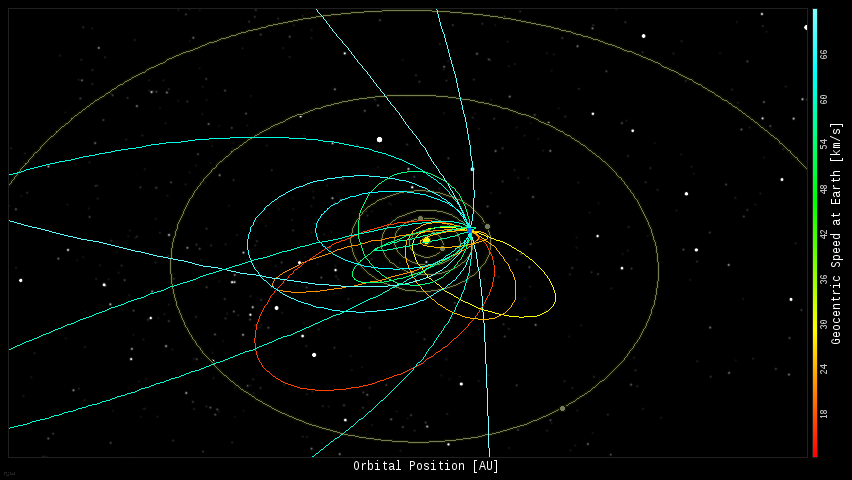 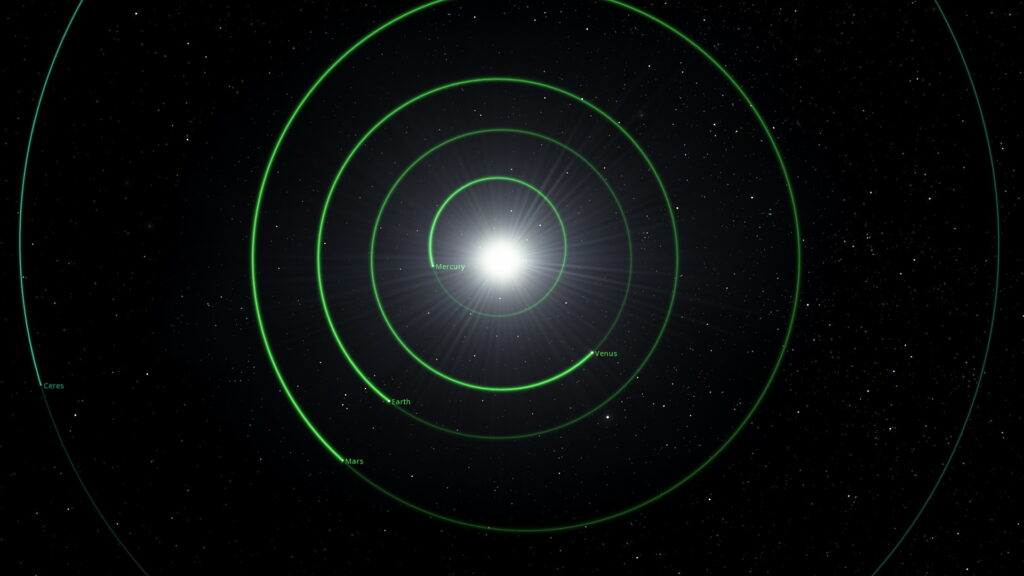 Position of the planets in the inner solar system, 2020-10-13. Credit: SpaceEngine / Bob Trembley. 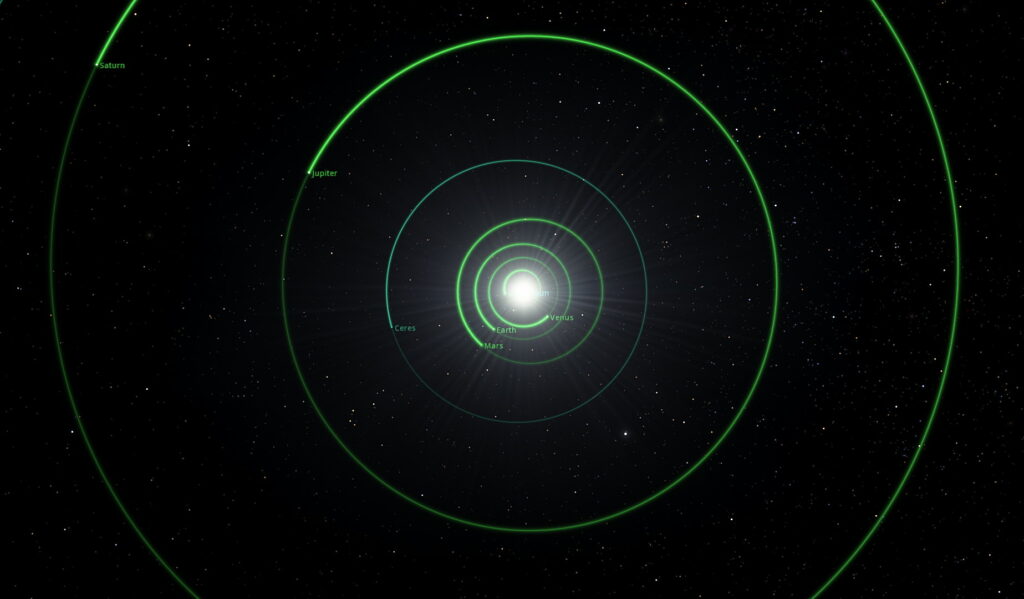 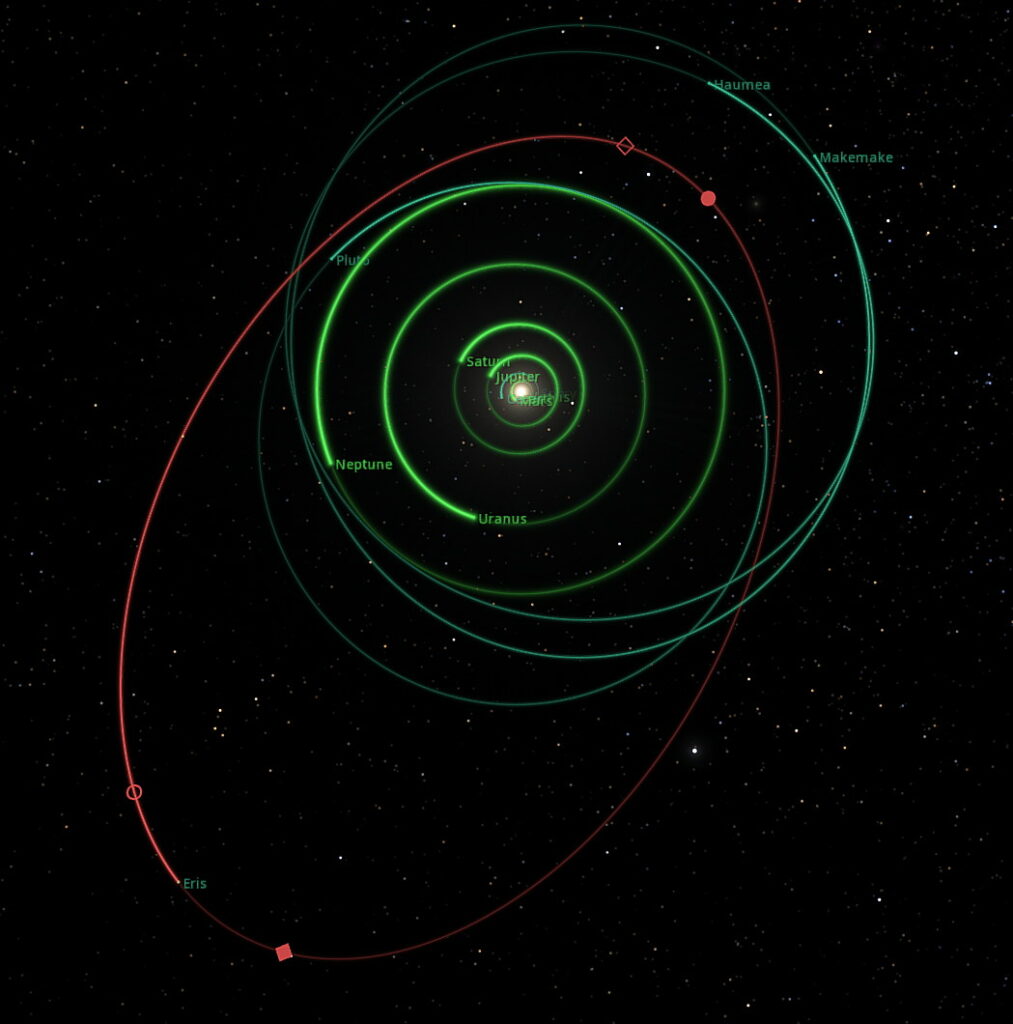 Want to know asteroid Bennu better? Take a tour of this small world I've been hanging out with. #ToBennuAndBack pic.twitter.com/1bOipvGmf9

The Soyuz rocket that will launch three Exp 64 crewmates to the station on Wednesday rolled out to its launch pad in Kazakhstan. More… https://t.co/QJNGlCe4vI pic.twitter.com/2UZeNuhOCW

Three Exp 64 crew will begin a 6-month space research mission on the station on Oct. 14 at 3:54am ET just over 3 hours after launching. https://t.co/qpyi2LM11l pic.twitter.com/kzcA1NIjtd

As you enjoy Mars glowing in the eastern sky this evening, just remember that bright, red dot is actually an active world. The HiRISE camera aboard our Mars Reconnaissance Orbiter has even caught avalanches in progress! More: https://t.co/Er7dUDDa00 pic.twitter.com/XaTeYo6YS7

Climate: Having a grandchild changes the way you look at Earth’s future

Did you know that carbon dioxide from human activity is increasing more than 250 times faster than it did from natural sources after the last Ice Age?

The evidence for climate change is compelling. Learn more at our updated "Evidence" page. https://t.co/UgU4KgxtMW

Meet some of the people behind the Sentinel-6 Michael Freilich satellite. This international effort will help us further understand our changing climate and rising sea levels. https://t.co/JAw2xkCJxB#SeeingTheSeas pic.twitter.com/Jor6pmgmfu

?️ Sometimes when we look out into the shadowy depths of the cosmos, we find it looking right back! ? @NASAHubble captured stunning detail in this spine-chilling cat’s eye here: https://t.co/07UuV1bvmu pic.twitter.com/ibTkGdnmNB

Continuing with my visual tour of nearby stars and their systems, we travel to the Gliese 229 system, about 19 light years distant. 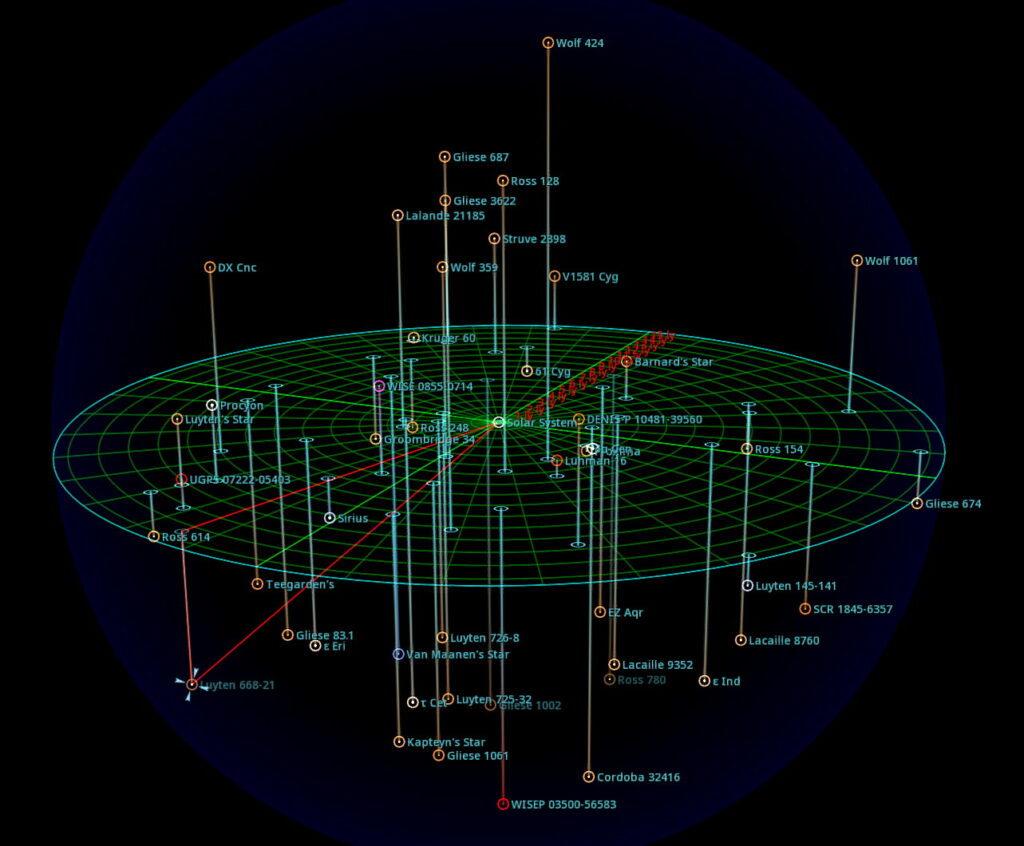 Gliese 229 is about 19 light years from Sol; the plane (green) is aligned with the orientation of the plane of the Milky Way galaxy. Credit: SpaceEngine / Bob Trembley.

Gliese 229 (also written as Gl 229 or GJ 229) is a binary system composed of red dwarf and brown dwarf about 19 light years away in the constellation Lepus. Primary component has 58% of the mass of the Sun, 69% of the Sun’s radius, and a very low projected rotation velocity of 1 km/s at the stellar equator.

The star is known to be a low activity flare star, which means it undergoes random increases in luminosity because of magnetic activity at the surface. The spectrum shows emission lines of calcium in the H and K bands. The emission of X-rays has been detected from the corona of this star. These may be caused by magnetic loops interacting with the gas of the star’s outer atmosphere. No large-scale star spot activity has been detected.

A substellar companion was discovered in 1994 by Caltech astronomers Kulkarni, Tadashi Nakajima, Keith Matthews, and Rebecca Oppenheimer, and Johns Hopkins scientists Sam Durrance and David Golimowski. It was confirmed in 1995 as Gliese 229B, one of the first two instances of clear evidence for a brown dwarf, along with Teide 1. Although too small to sustain hydrogen-burning nuclear fusion as in a main sequence star, with a mass of 21 to 52.4 times that of Jupiter (0.02 to 0.05 solar masses), it is still too massive to be a planet. As a brown dwarf, its core temperature is high enough to initiate the fusion of deuterium with a proton to form helium-3, but it is thought that it used up all its deuterium fuel long ago. This object now has a surface temperature of 950 K.

In March 2014, a super-Neptune mass planet candidate was announced in a much closer-in orbit around GJ 229. Given the proximity to the Sun, the orbit of GJ 229Ab might be fully characterized by the Gaia space-astrometry mission or via direct imaging. In 2020, a super-Earth mass planet was discovered around GJ 229. It orbits the star closer in than GJ 229Ab, and is located in the star’s habitable zone.  – Wikipedia

Orbit of Red Dwarf Gliese 229 A

This is a REALLY unusual system! When I was composing the images below, I centered on the exoplanet, and time-accelerated until the companion brown dwarf was in the frame with the band of the Milky Way; because the brown dwarf orbits so far away from the red dwarf, it does not move very fast across the sky. BUT! Because of the high inclination of the exoplanet, the brown dwarf appears to loop up and down! Very strange! 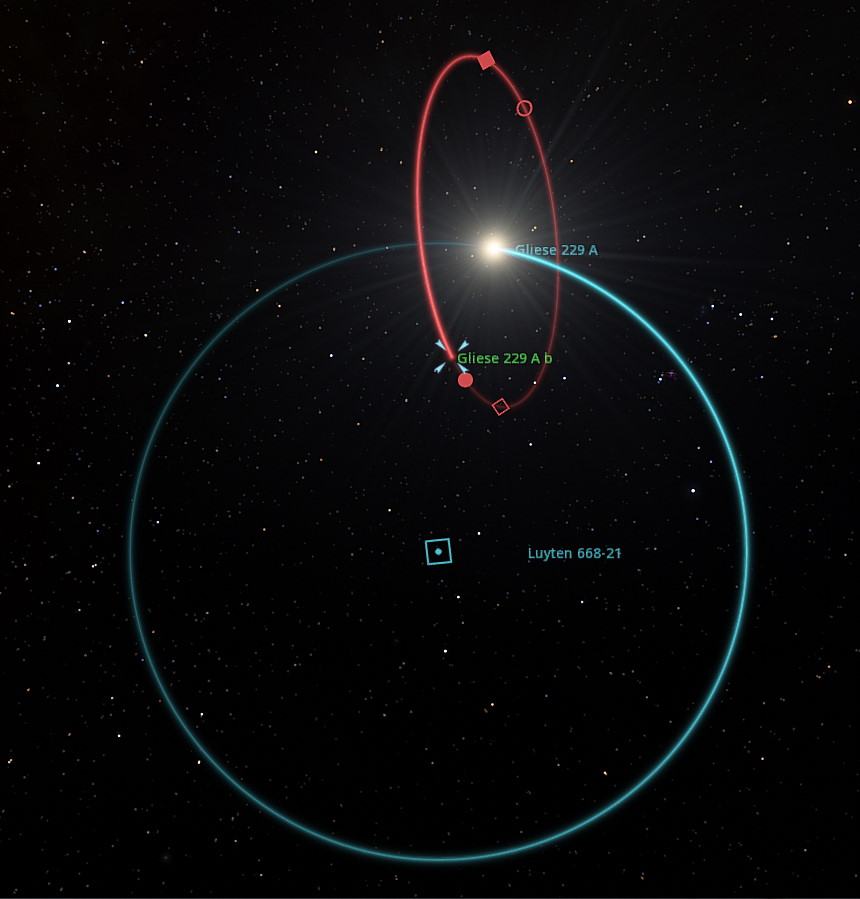 Orbit of Brown Dwarf Gliese 229 B 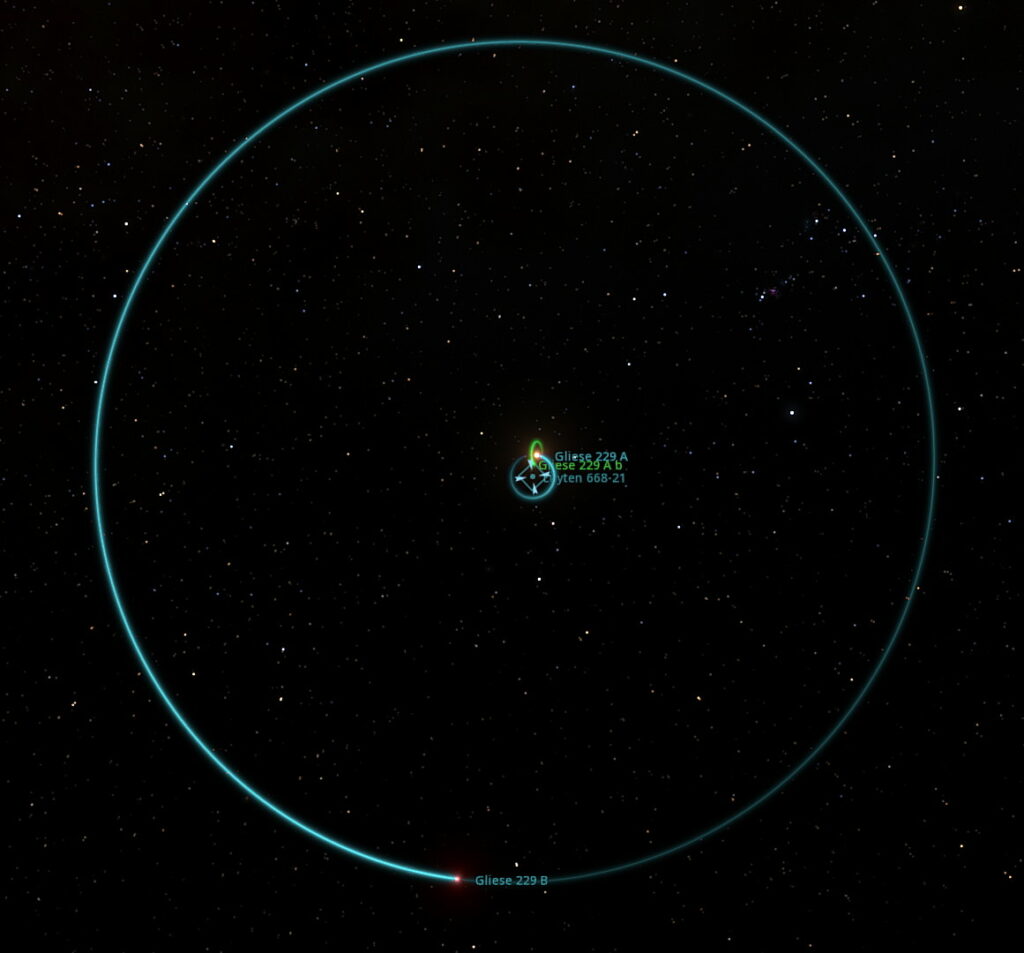 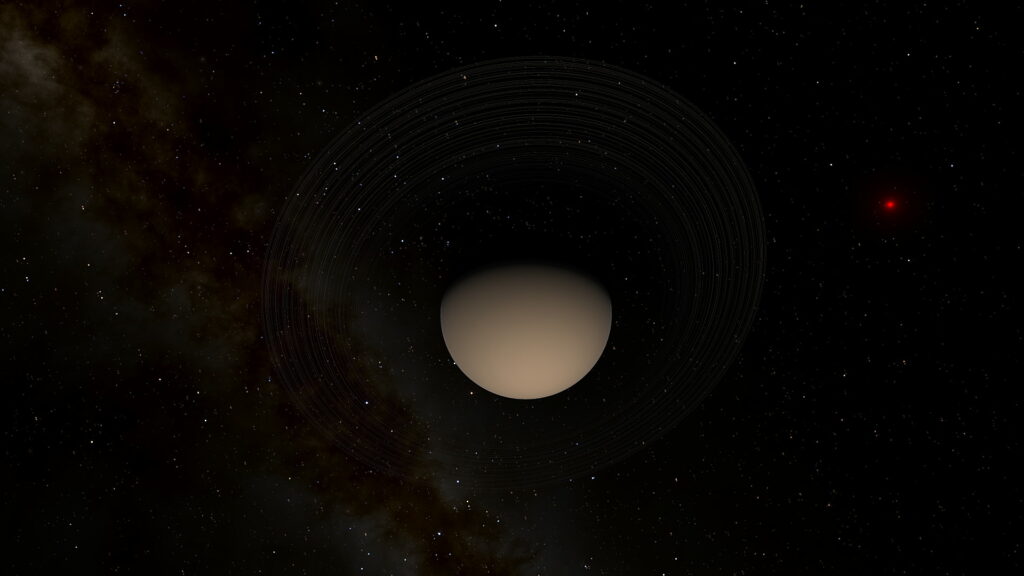 Artistic rendering of Exoplanet Gliese 229 A b – Brown Dwarf Gliese 229 B is in the distance to the right. Credit: SpaceEngine / Bob Trembley. 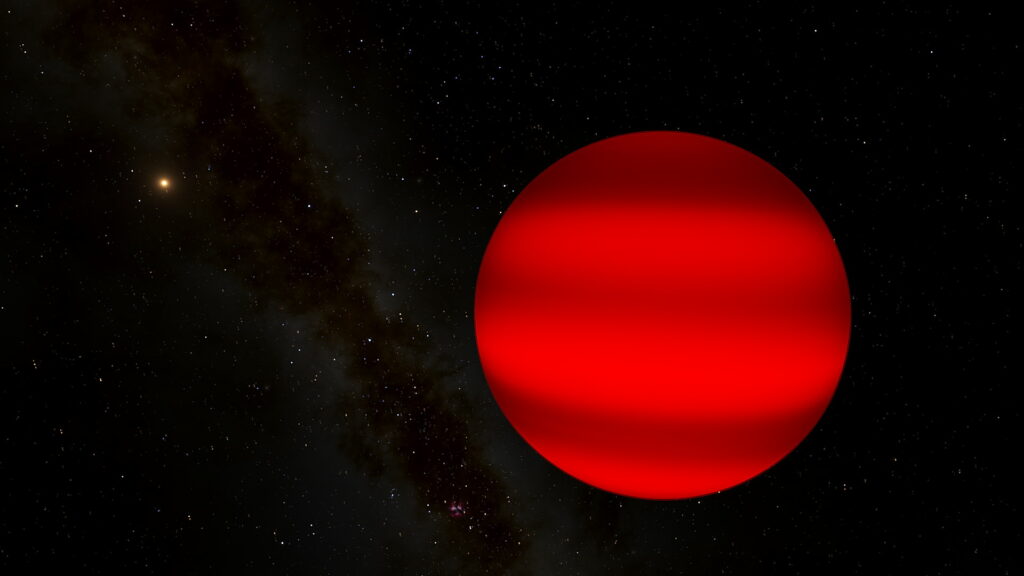