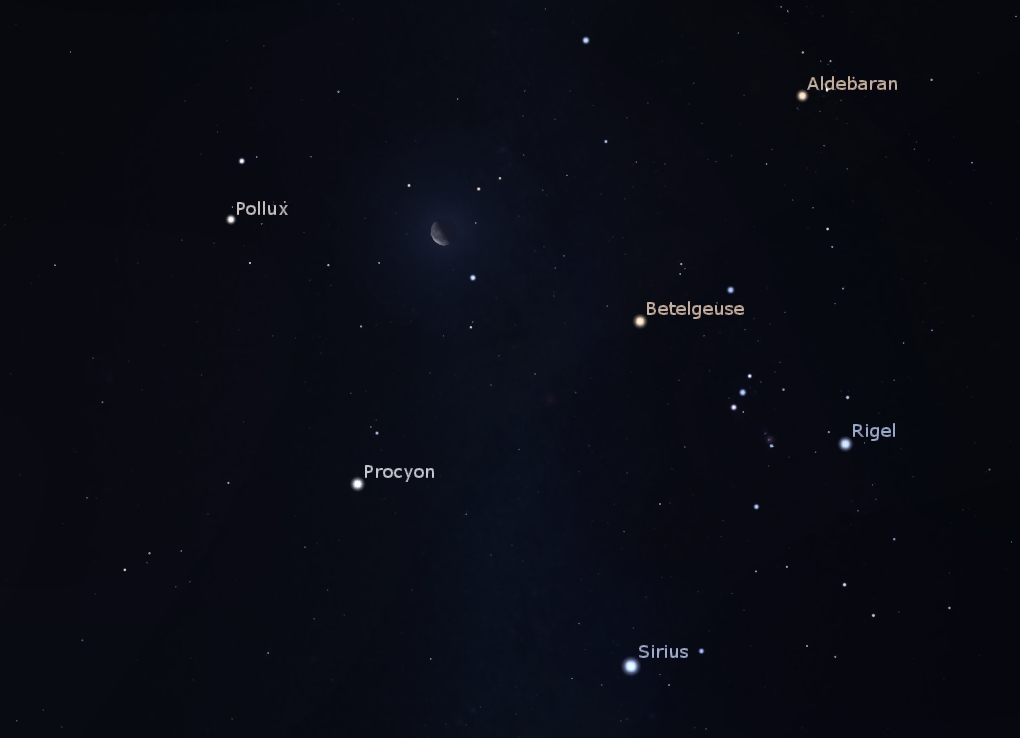 The Moon joins the constellations Gemini and Orion high south in the predawn sky.

The Moon near Orion and Gemini in the southeastern predawn sky on Oct. 2, 2018. Credit: Stellarium / Bob Trembley.

Mars and Saturn continue to be excellent observing targets in the southern sky after sunset. 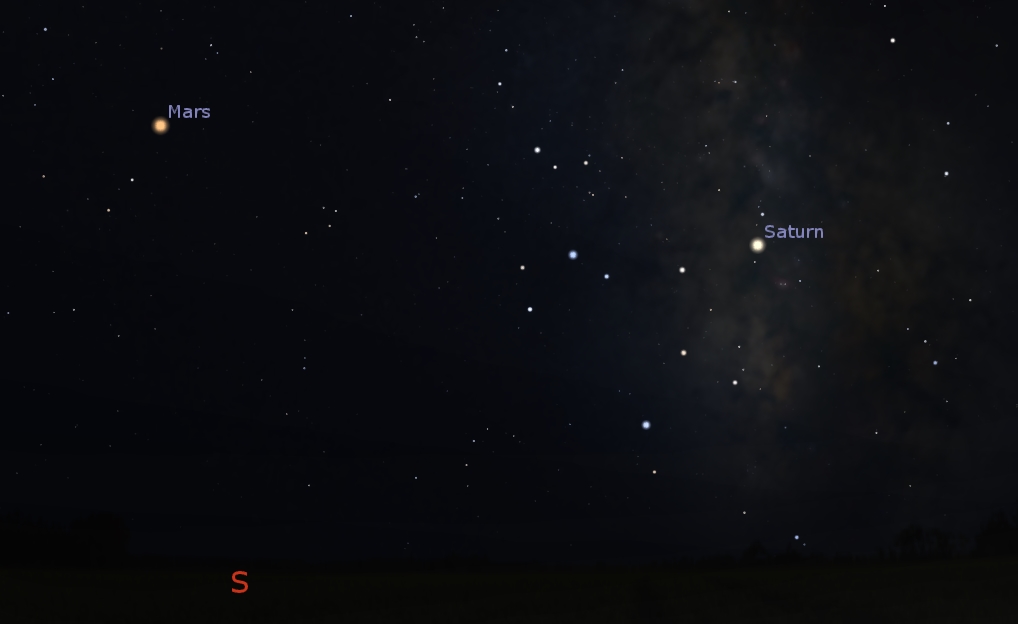 You might be able to catch a glimpse of Venus this week if you have a clear southwestern horizon; Venus is VERY low in the sky at sunset. 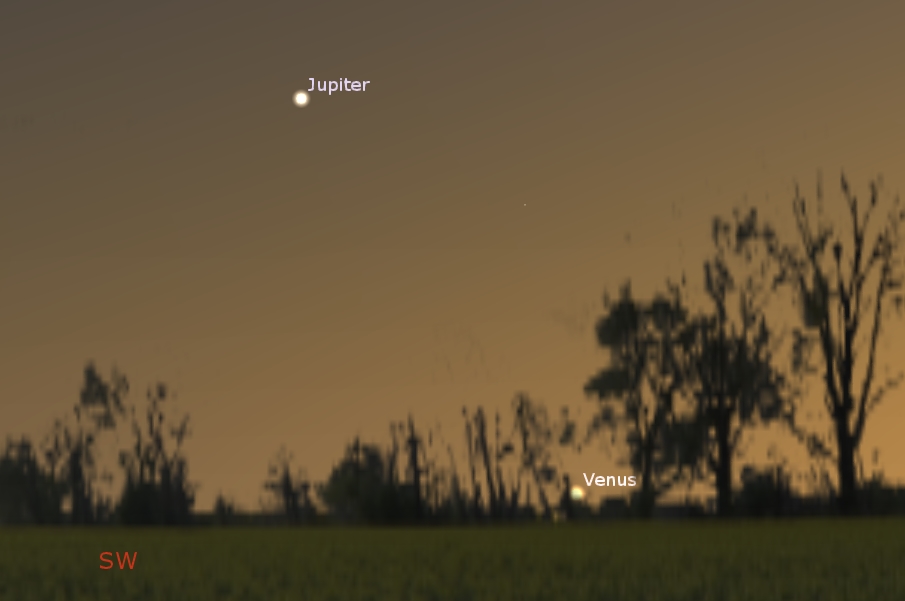 Jupiter and Venus in the southwestern sky at dusk on Oct. 2, 2018. Credit: Stellarium / Bob Trembley.

The Pleiades (also known as the Seven Sisters) is an open star cluster located in the constellation of Taurus. The cluster contains several hot, B-type stars, and is among the nearest star clusters to Earth. The Pleiades easily visible to the naked eye – binoculars work great for viewing the Pleiades; if you want to use a telescope, you’ll need to use a longer focal-length (lower magnification) eyepiece. 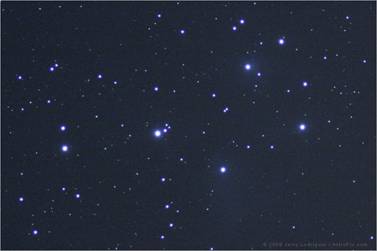 The Pleiades through a small telescope (at low magnification), or binoculars. Credit: http://www.naasbeginners.co.uk

Time-exposures of the Pleiades reveal a blue nebulosity surrounding the stars; once thought to be left over from the formation of the cluster, it is now thought to be an unrelated cloud in the interstellar medium, through which the stars are currently passing. 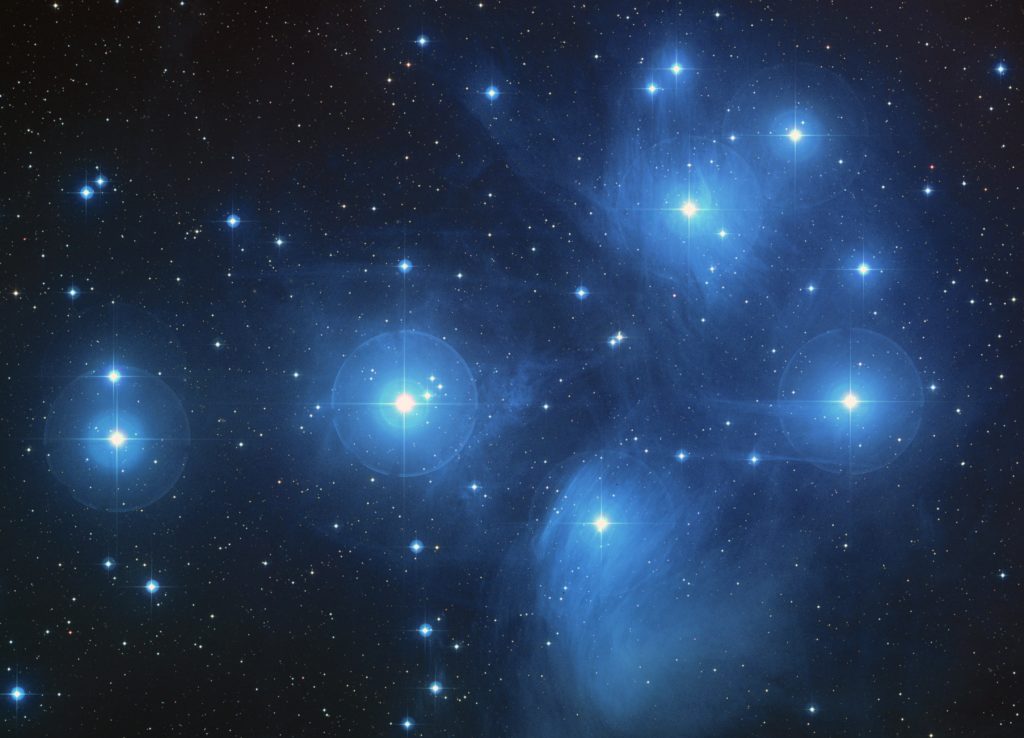 The Pleiades rises around 10:00 PM in the east, and is high in the southern sky before sunrise. 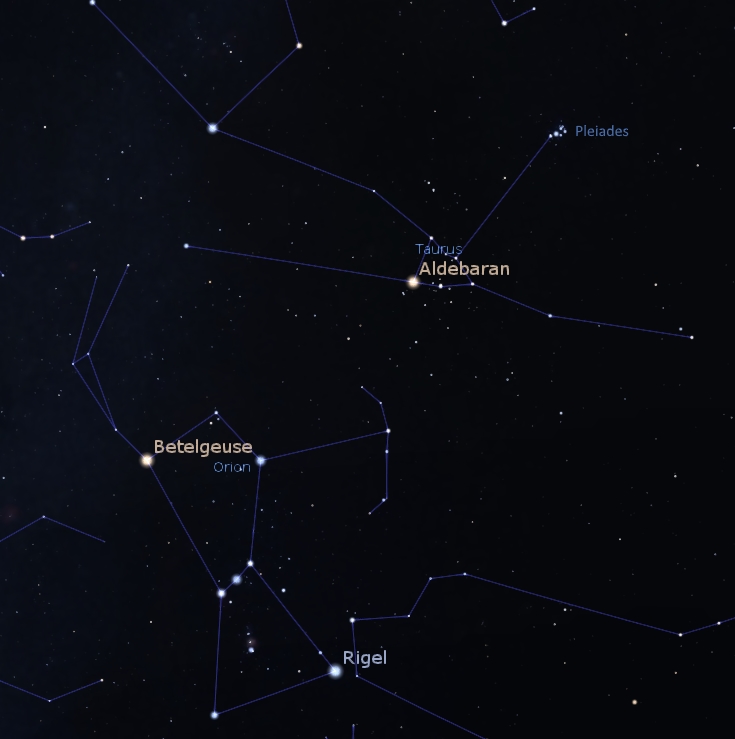 The Moon is at third quarter on Oct. 2nd, and will be a waning crescent the rest of the week. I always like this time in the Moon’s phase, because I can usually catch a glimpse of it through my kitchen window, just above my neighbor’s house, early in the morning.

The Sun has a spot! It’s small, and rotating out of view soon, but it’s the first spot to show up in a while!

The sunspot has some nice coronal loop activity, seen as the bright region in the animation below. The gigantic coronal hole at the Sun’s north pole seems to have gotten even larger; the smaller hole at the south pole appears to have almost completely vanished. Solar wind is streaming out of two coronal holes along the Sun’s equator.

SpaceWeather.com says: “Two holes in the sun’s atmosphere are turning to face Earth, each spewing a stream of solar wind toward our planet. Estimated times of arrival: Oct. 4th and Oct 7th. Solar wind spewing from the smaller hole (right) will arrive first, causing polar geomagnetic unrest but probably not a full-fledged geomagnetic storm. Solar wind escaping from the second, larger hole (left) will follow days later bringing a chance of G1-class storms. In both cases, equinox cracks in Earth’s magnetic field will permit the solar wind to spark Arctic auroras.”

A few long-lived prominences continue appear along the Sun’s limb, with several shorter-lived ones popping up all over; it’s still raining here in Michigan… 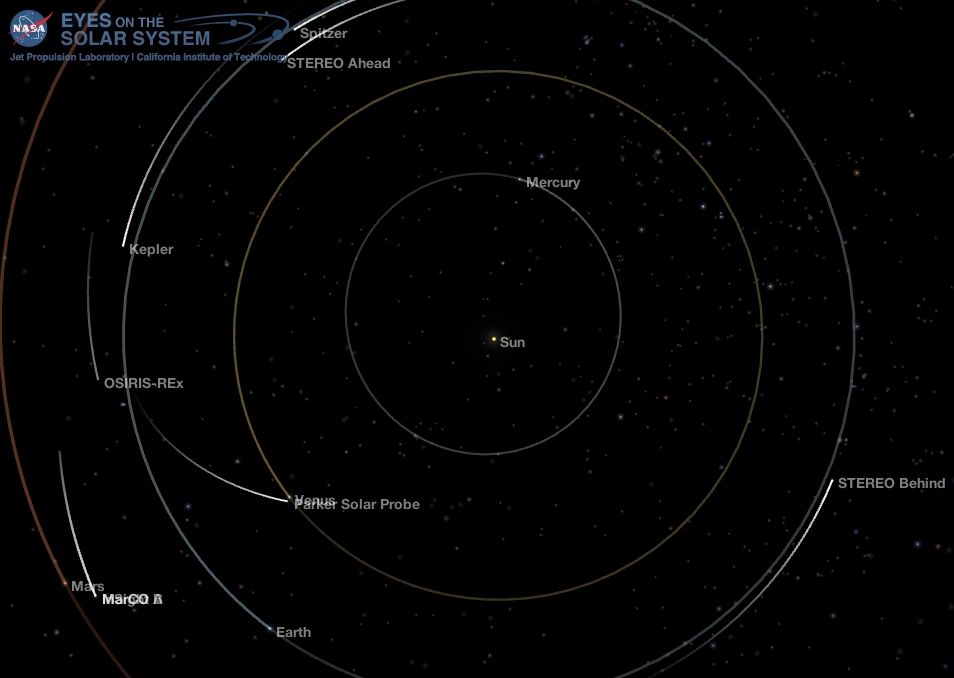 Position of the planets and several spacecraft in the inner solar system, Oct. 2, 2018. Credit: NASA Eyes on the Solar System / Bob Trembley. 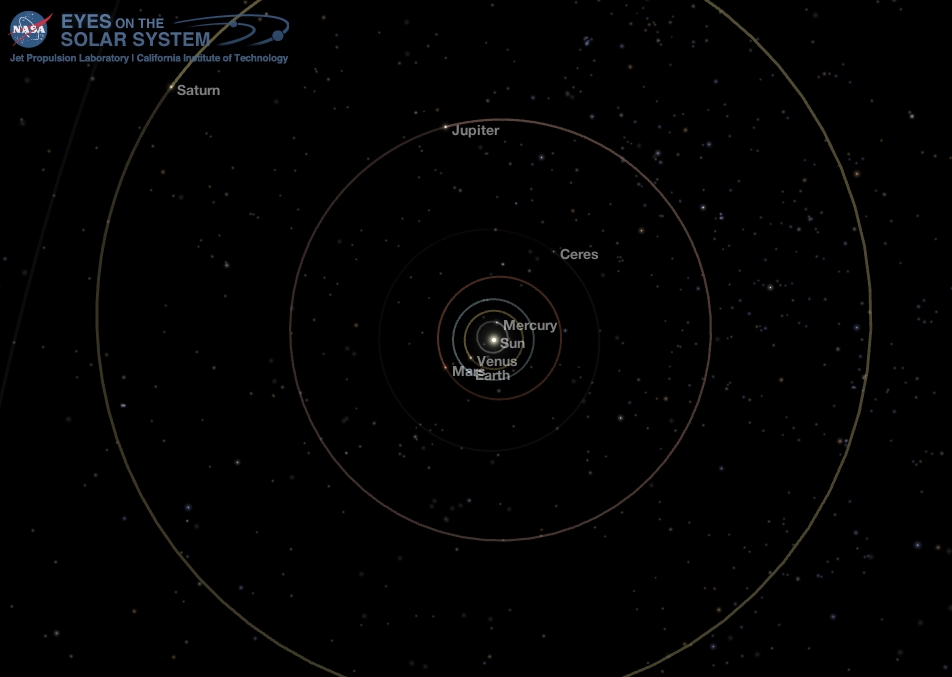 Position of the planets in the middle solar system, Oct. 2, 2018. Credit: NASA Eyes on the Solar System / Bob Trembley.

Last week, I mentioned the unique asteroid rovers that the JAXA’s Hayabusa2 spacecraft successfully landed on asteroid Ryugu – here are images from that asteroid’s surface!

As Hayabusa2 descended towards Ryugu to deploy the MINERVA-II1 rovers, the ONC-T camera snapped the highest resolution image yet of the asteroid surface!https://t.co/JDbk29RXHG pic.twitter.com/KFsLet5BMJ

The Parker Solar Probe does a gravity-assist flyby of Venus on Oct. 3!

Early on Oct. 3, #ParkerSolarProbe performs the first of seven Venus flybys. These gravity assists will help the spacecraft spiral its orbit closer and closer to the Sun over the course of the mission. More upcoming milestones on the blog: https://t.co/s6Xf7b1bq6 pic.twitter.com/Y6ADSLpbTW

Since its United Nations declaration in 1999, World Space Week has grown into the largest public space event on Earth. More than 3,700 events in 80 countries celebrated the benefits of space and excitement about space exploration in 2017.  The 2018 theme is “Space Unites The World” and 2019 theme “The Moon:  Gateway to the Stars.”