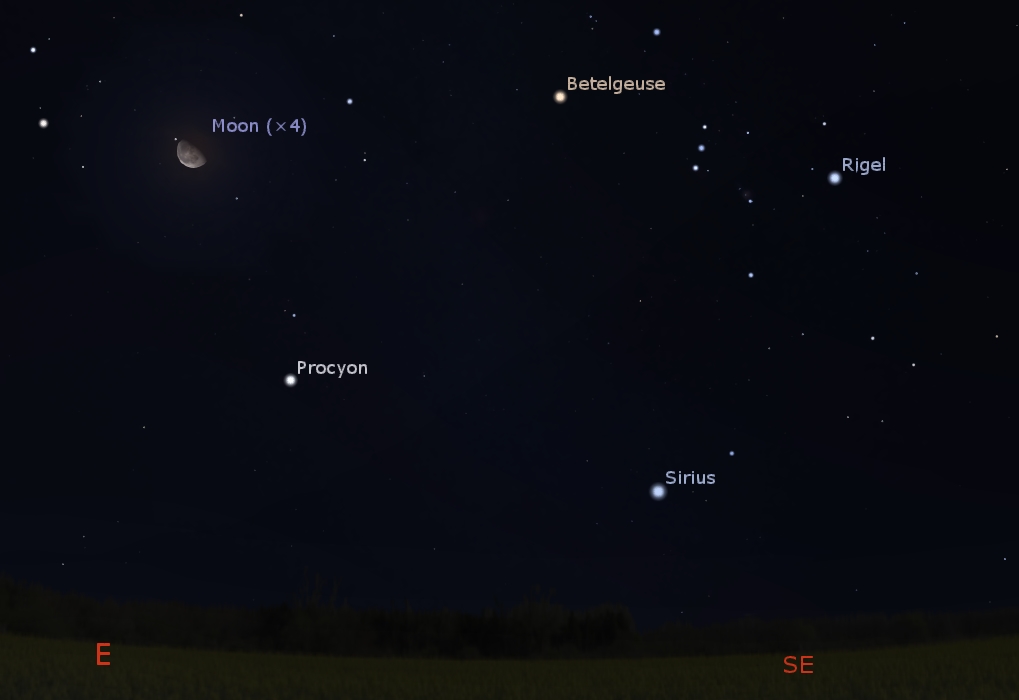 The Moon will appear low in the eastern sky between the constellations Gemini and Orion during the early morning hours on Oct. 30th.

The Moon will be between the constellations Gemini and Orion in the early morning east-southeastern sky on Oct. 30th. Credit: Stellarium / Bob Trembley.

That same Moon will appear high in the sky as dawn’s light begins to show. 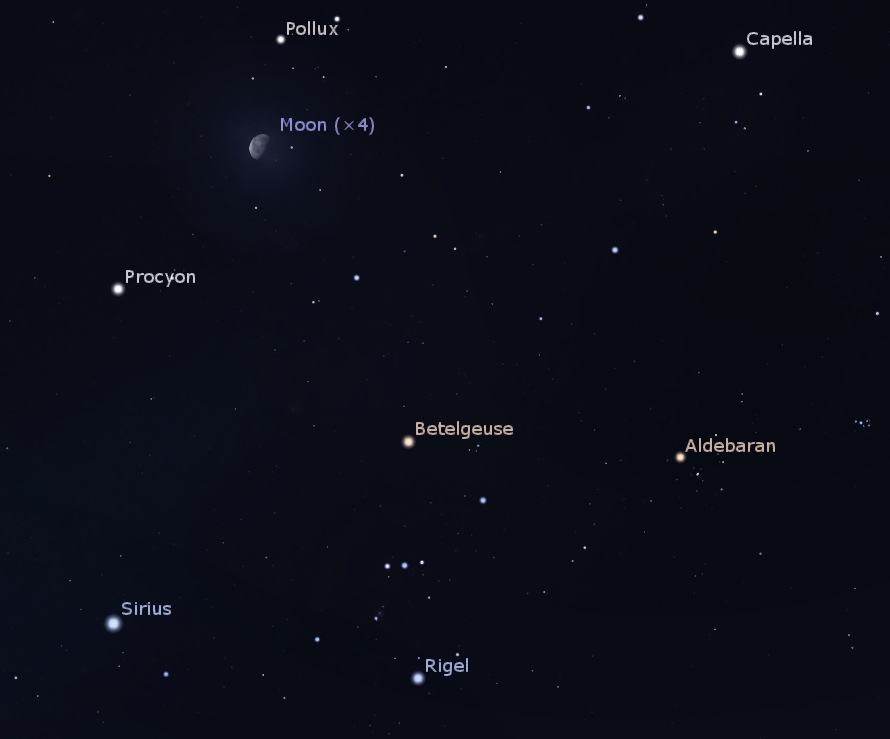 The Moon and the constellations Gemini and Orion are high in the southwest predawn sky on Oct. 30th. Credit: Stellarium / Bob Trembley.

There will be a conjunction of the crescent Moon and the star Regulus low in the eastern sky, early in the morning hours on Nov. 2nd. 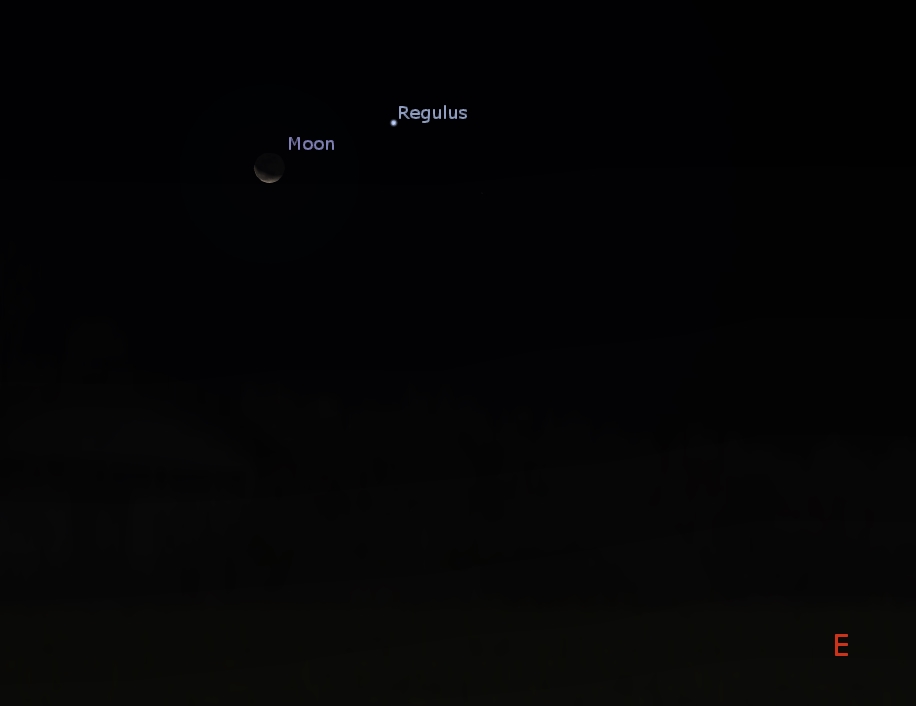 Conjunction of the Moon and the star Regulus in the early morning sky, Nov. 2nd. Credit: Stellarium / Bob Trembley.

A very thin crescent Moon will appear with the star Arcturus in the eastern predawn sky on Nov. 5th. 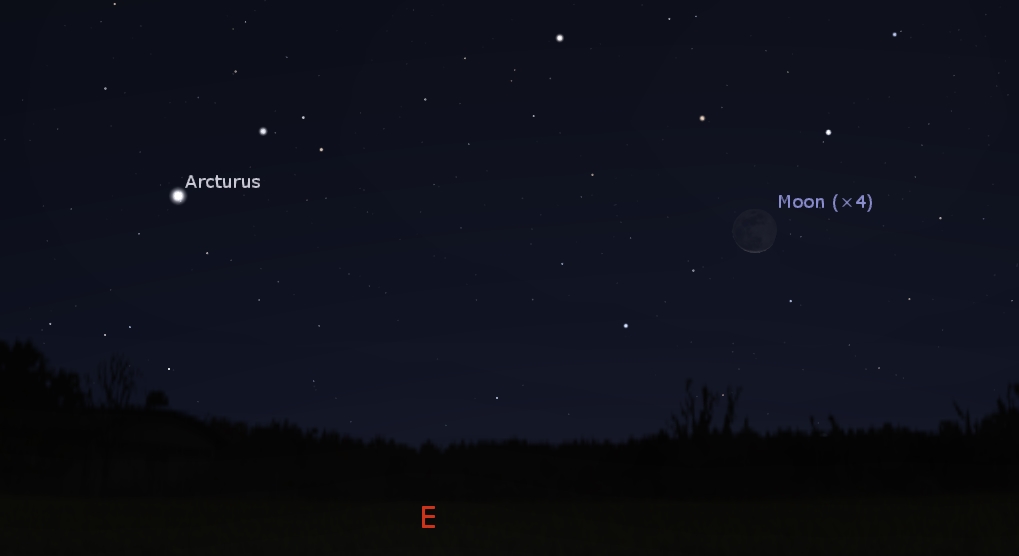 Mars and Saturn continue to put on a show in the southern sky after sunset. 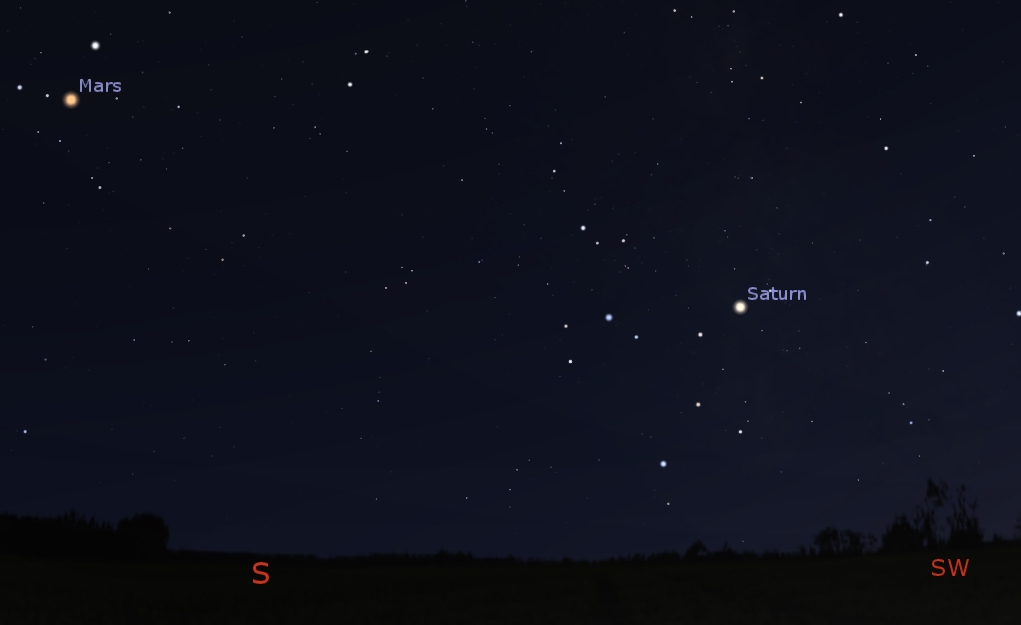 Mars and Saturn in the south-southern sky after sunset on Oct. 30th. Credit: Stellarium / Bob Trembley.

Observing Target: The Dance of the Planets

Over the next week, the positions of Jupiter and Mercury change drastically in southwestern sky at dusk! Mercury stays low but gets brighter – Jupiter makes a quick dive towards the horizon, and will soon to be hidden by the glare of the Sun.

Animation of Mercury and Jupiter in the southwestern sky near sunset Oct. 29-Nov. 7

Comet 46P/Wirtanen in the news:

You can find Comet 46P/Wirtanen in the southern sky after midnight this week. 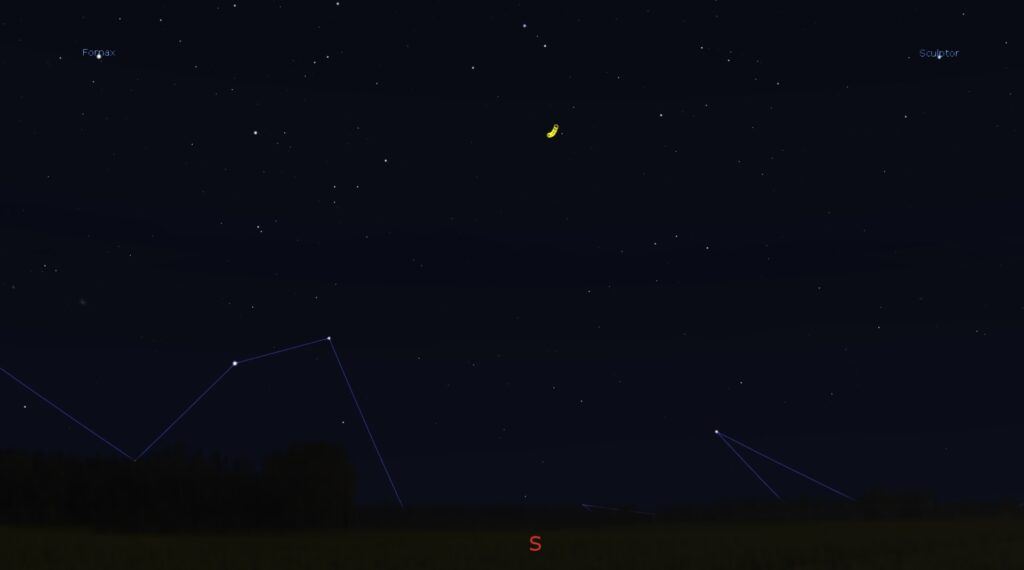 The Moon is a waning gibbous heading towards third-quarter on Oct. 31st; after Halloween, the Moon will be a waning crescent. As I saw my wife off to school this morning, predawn light was just starting brighten the sky, and the Moon was nearly directly overhead.

The sun has been spot-free for 12 days. Coronal holes remain open at both poles, and a rather large hole with a smaller companion appear on the equator.  SpaceWeather.com says “A stream of solar wind flowing from a small hole in the sun’s atmosphere is approaching Earth. Estimated time of arrival: Oct. 31st. The gaseous material could create ghostly-green skies around the Arctic Circle for Halloween.” There doesn’t appear to be any bright regions of coronal loop activity, but there may be something rotating into view on the Sun’s limb.

As with last week, there are a couple relatively long-lasting prominences on the Sun’s limb, and multiple short-lived ones popping up and quickly disappearing; have a close look at the northern limb in the animation below where dozens of small prominences are doing this.

In this diagram of the inner solar system, all of the fireball orbits from Oct. 29, 2018 intersect at a single point–Earth. Source: Spaceweather.com

This is the position of the planets and a couple spacecraft in the solar system – the Parker Solar Probe has passed the orbit of Mercury! 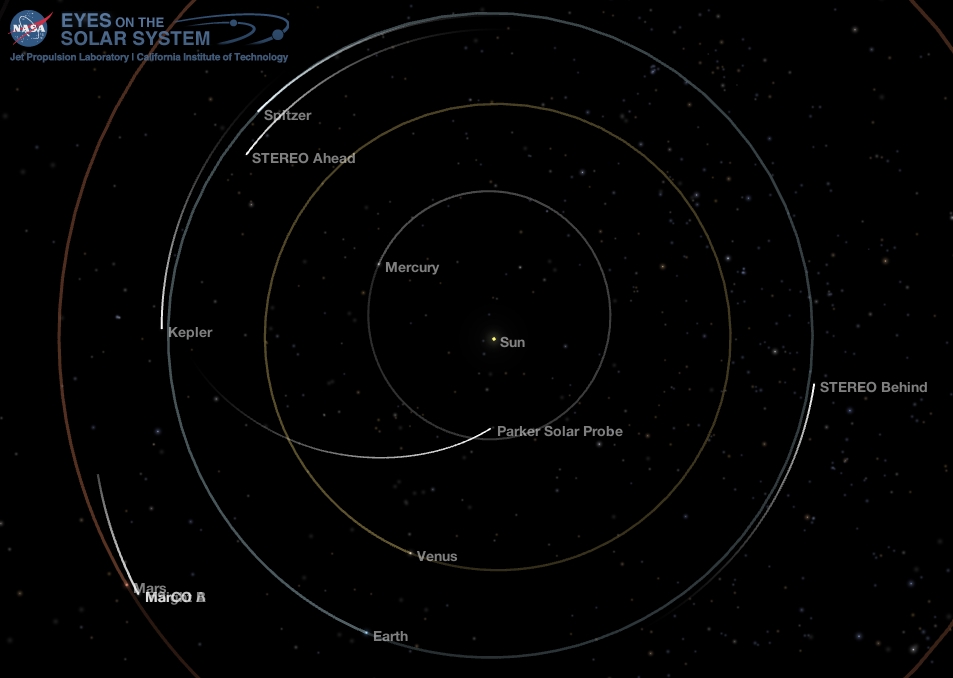 Position of the planets and several spacecraft in the inner solar system, Oct. 30, 2018. The Parker Solar Probe has crossed the orbit of Mercury, making it the closest a spacecraft has ever come to the Sun. Credit: NASA Eyes on the Solar System / Bob Trembley. 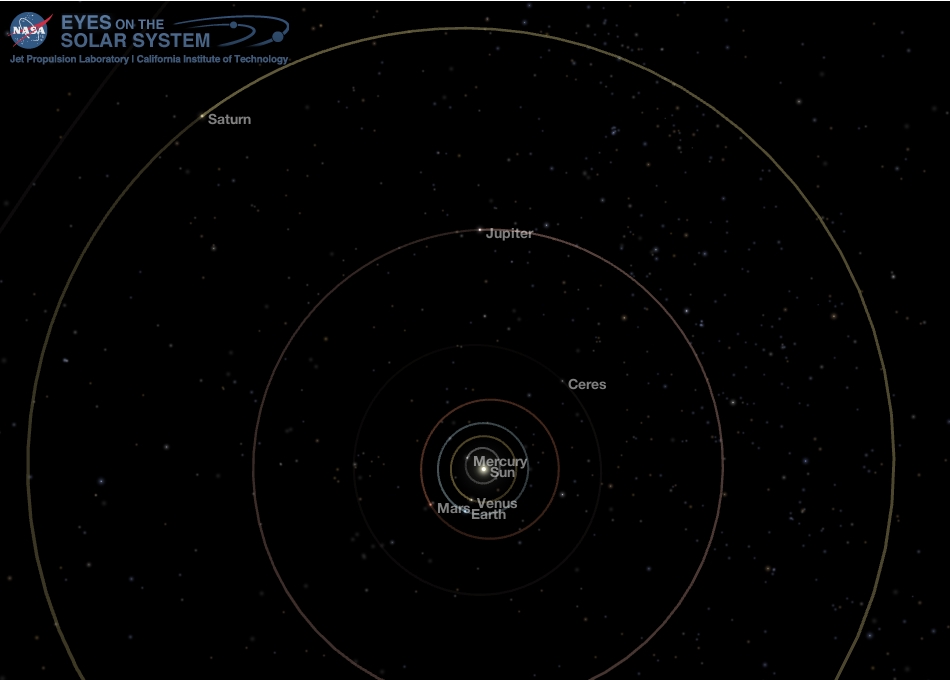 Position of the planets in the middle solar system, Oct. 30, 2018. Credit: NASA Eyes on the Solar System / Bob Trembley.

Two elusive clouds of dust, in semi-stable points just 400,000 kilometres from Earth, may have been confirmed by a team of Hungarian astronomers and physicists, read more at #MNRAS.#Space #Astronomy #FridayFeelinghttps://t.co/jwxx9HKDde pic.twitter.com/BLmslnOZcb

Hubble is back!!! At 9:00 PM EDT last night the spacecraft was returned to normal science operations, and at 2:10 AM EDT today it completed its first science observations since October 5. For more details: https://t.co/lT2Wpycqw2 pic.twitter.com/RIcrSyJ2hF

#ParkerSolarProbe has just become the closest-ever spacecraft to the Sun! It's now within 26.55 million miles of the solar surface, breaking the record set by Helios 2 in 1976. More: https://t.co/PtZV54CFRN pic.twitter.com/3fgPkWTUdc

Two records in one day! At about 10:54 p.m. EDT, #ParkerSolarProbe surpassed 153,454 miles per hour, making it the fastest-ever human-made object relative to the Sun. This breaks the record set by Helios 2 in 1976: https://t.co/eXi86Eb51T pic.twitter.com/Nci2qF1iQ9

Holy rotating Bennu, Batman! I used PolyCam to capture this set of images over a span of five hours on Oct. 23. The images show three views of asteroid Bennu as it rotates 1,800 miles (3,000 km) in the distance. More details: https://t.co/lNqY8Ibire pic.twitter.com/Oaatp1xDXT

The initial results are in, and my third Asteroid Approach Maneuver executed as expected! ??? I used the TCM thrusters for this two-part braking burn designed to slow my speed relative to Bennu from about 11.7 mph (5.2 m/sec) to 0.24 mph (0.11 m/sec): https://t.co/tsf9pn53uZ pic.twitter.com/X84WyzsmvU