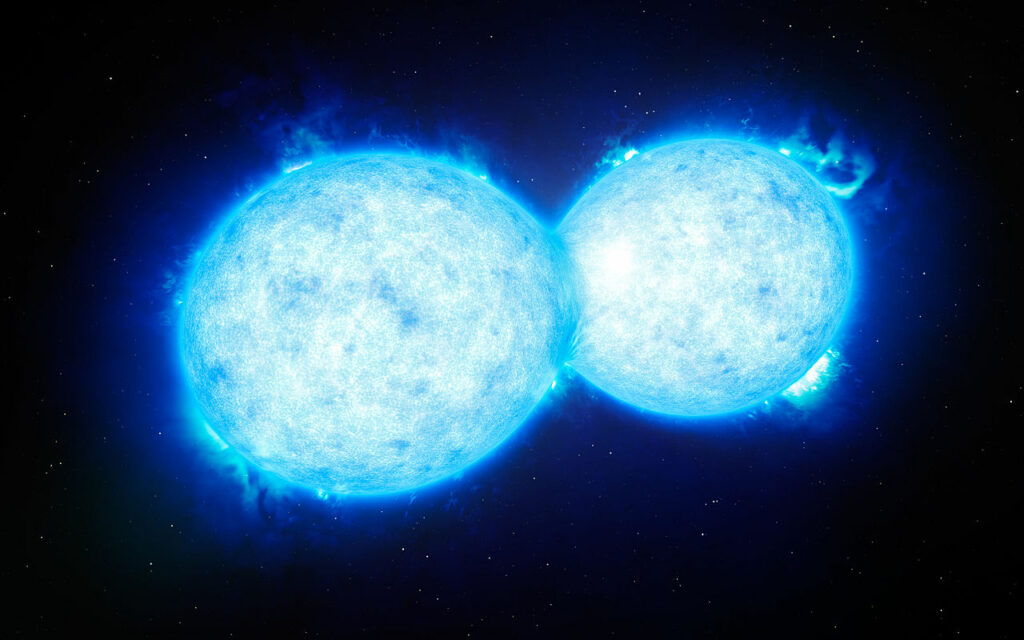 I covered a LOT of topics! I mentioned the Inspiration 4 mission – none of the students had heard of that.

I discussed the speed of light: “8 minutes from the Sun,” communication times to the Moon and Mars, and the whole “when you look up into the sky, you are seeing into the past” bit.

Image: A beam of light is depicted travelling between the Earth and the Moon in the time it takes a light pulse to move between them: 1.255 seconds at their mean orbital (surface-to-surface) distance. The relative sizes and separation of the Earth–Moon system are shown to scale.

I navigated to NASA’s Solar System Exploration website – I was going to “quickly” go over the solar system… HA! What was I thinking? I discussed the Moon, gravity and tidal locking, and then went to Mercury and I discussed its north pole craters with ice.

I navigated to Venus, and when I said the surface pressure was 90 bars, and temperature was 900°F, and their eyes got HUGE! I also mentioned Venus’ bizarre rotation. I showed them photos from Venus’ surface, and discussed the three upcoming missions to Venus from NASA and the ESA. I mentioned that in a decade or so, THEY could be the researchers working with brand new data from Venus!

I clicked on Mars, and showed how Phobos was tidally-locked. We also had discussion about how inhospitable Mars is as a settlement location, and the perils of travel there. None of the students had seen the movie “The Martian;” I showed them the Hermes interplanetary spacecraft from that movie, and said “THIS right here, with that rotating torus, is exactly what we need to go to Mars… and we’re nowhere near that yet.”

I navigated to Eros and asked the students if they knew what an asteroid was? One student answered “rock” – which made me happy! I went on to quickly explain differentiation and the different types of asteroids.

I clicked on comet 67P/Churyumov-Gerasimenko and as I rotated around it, I asked them what it looked like. I then quickly discussed the “frost line” and what comets were, and how they function.

Which led me to discuss icy bodies in the outer solar system – so I went to Saturn, and showed them its rings, and how thin they are. I asked them if they knew what the rings were made of, and they got it right! But when I when asked them what Saturn’s moons were made of, one said “rock,” so I went to Mimas, and asked what that looked like – they said “ice!” So, if Saturn’s rings are ice, and its moons are ice – what do you think happened? And they got it pretty darn close! I then discussed the Roche-limit, and Saturn tearing a moon apart; I tied it back to the gravitational forces that cause the Earth’s Moon to be tidally-locked.

As the hour was running out, I navigated to Enceladus and showed the students images of its plumes – which they’d never seen before… I ran out of time when starting to discuss hydrothermal vents – next time!

Sometime during the hour, I mentioned the Exocast podcast that I recently started listening to – they’ve had some pretty interesting guests!

Jupiter and Saturn continue to be excellent viewing targets in the southeastern sky after sunset; Jupiter is slowly moving eastward away from Saturn.

Venus continues to appear low above the southwestern horizon after sunset, moving slightly southward towards the star Antares each evening; the crescent Moon appears between Antares and Venus on Oct. 9th. I call this a “fender-bender conjunction” – please be careful when driving south or west on this day!

The crescent Moon appears in the constellation Sagittarius in the southwestern sky after sunset on Oct. 11th

A thin crescent Moon appears above the eastern horizon before sunrise on Oct. 4th – be sure to look for earthshine.

A very thin crescent Moon appears very low above the eastern horizon before sunrise on Oct. 5th – be sure to look for earthshine, again!

The Sun has 2 spots – one of them very large and rotating into view. SpaceWeather.com says: “AR2882 is big, but quiet. It has a simple ‘alpha-class’ magnetic field that poses little threat for flares..”

SpaceWeather.com also reports that “Sunspot counts for Sept. 2021 were the highest in more than 5 years. And, for the 11th month in a row, the sunspot number has significantly exceeded the official forecast.”

The Sun seen in 193 angstroms on October 4th.

AR2880 is blowing a LOT of stuff off, and AR2882 has a LOT of activity associated with it.

The Sun seen in 304 angstroms on October 4th.

Landing on an Asteroid

Position of the planets & several spacecraft in the inner solar system on October 5th:

A bigger nursery for the solar system's first formed solids

Quick link here. Note: Landsat 9 has NOT yet bee added to the installable NASA Eyes app for Windows/MAC.

National Audubon Society calls for ‘Lights Out’ after ‘mass mortality’ event of migratory birds. What a sad story!

Luminous: Can a Michigan astronomer predict a nova?

This video was a special presentation at last night’s meeting of the Warren Astronomical Society!

Luminous tells the story of the first astronomer in history to publicly predict the near-future explosion of a star – if he’s right, 2022 will see the closest thing to a supernova in the skies of earth in 400 years, and every school kid in the northern hemisphere will know it. But the prediction is high risk. Others in the astronomical community are skeptical, and Professor Larry Molnar’s professional and personal reputations hang in the balance. Luminous, a feature documentary by award-winning filmmaker Sam Smartt (Wagonmasters), follows Larry’s journey to test his unprecedented prediction, knowing that its success or failure will unfold squarely in the international spotlight.

Larry Molnar is a professor of Physics and Astronomy at Calvin University in Grand Rapids, MI. He earned his PhD from Harvard University in 1985 and was a post-doctoral at the Harvard Smithsonian Center for Astrophysics from 1985-1988. Before coming to Calvin, Larry taught at the University of Iowa from 1988-1998. In many ways, Larry is an unlikely protagonist for this story. Though brilliant, he is mild-mannered, kind, unassuming, and not a seeker of the limelight. He believes in intellectual curiosity for its own sake, not in accomplishing great things in order to garner attention. For the audience, the central dramatic question of the film is clear— “Is Larry right? Will the star actually explode?” But as a scientist Larry sees it differently: “In a sense, I don’t care whether I’m right or not. What I want to know is the truth.”

The Science Behind the Prediction

Using light curve data from V1309 SCO leading up to its red nova outburst in 2008, Professor Molnar developed a predicted curve of exponential period decay in KIC 9832227, which predicts a similar red nova outburst in 2022 (see graph below.) With only one such event estimated to occur in our galaxy every ten years, it seems wildly improbable that Larry has stumbled upon the next one to explode, but when the system follows the prediction perfectly for two years, Larry decides to go public with his prediction so that everyone can watch the event if it occurs.

V1309 Scorpii (also known as V1309 Sco) is a contact binary that merged into a single star in 2008 in a process known as a luminous red nova. It was the first star to provide conclusive evidence that contact binary systems end their evolution in a stellar merger. Its similarities to V838 Monocerotis and V4332 Sagittarii allowed scientists to identify these stars as merged contact binaries as well. – Wikipedia