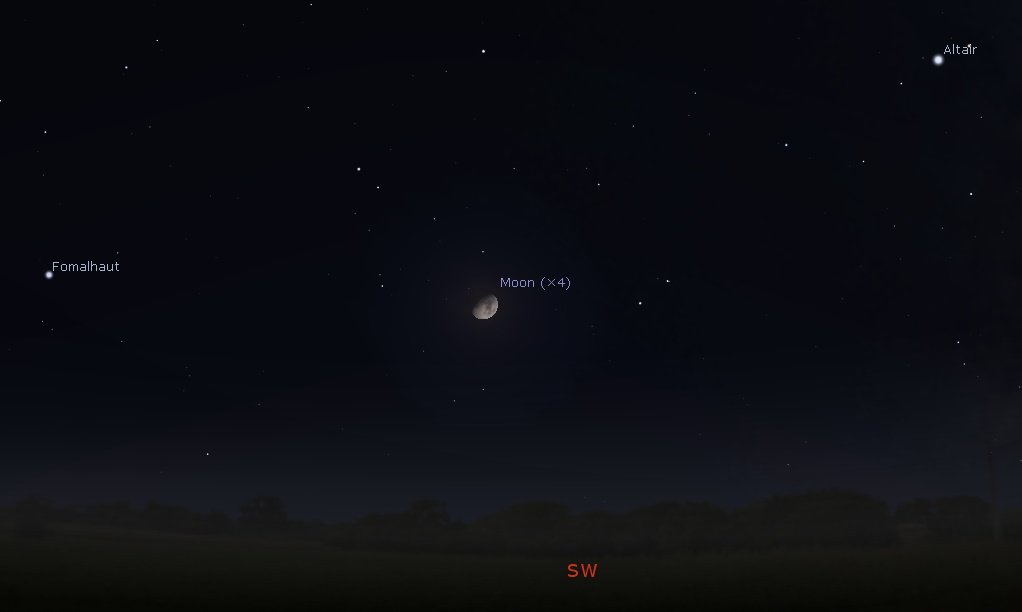 This week is World Space Week! Held annually every October 4-10th, it is the largest space event on Earth, with more than 5,000 events in over 80 countries. The theme for 2019 is: “The Moon: Gateway to the Stars.”

“The General Assembly declares 4 to 10 October World Space Week to celebrate each year at the international level the contributions of space science and technology to the betterment of the human condition” – UN General Assembly resolution, 6 December 1999

Saturn, Jupiter and the Moon continue to be excellent observing targets all week after sunset.

The waxing gibbous Moon with Saturn and Jupiter in the southern sky after sunset, Oct. 8, 2019. Credit: Stellarium / Bob Trembley

The waxing gibbous Moon is in the southwestern sky at midnight on Oct. 8th.

At midnight on Oct. 11th, the waxing gibbous Moon is high in the southern sky. 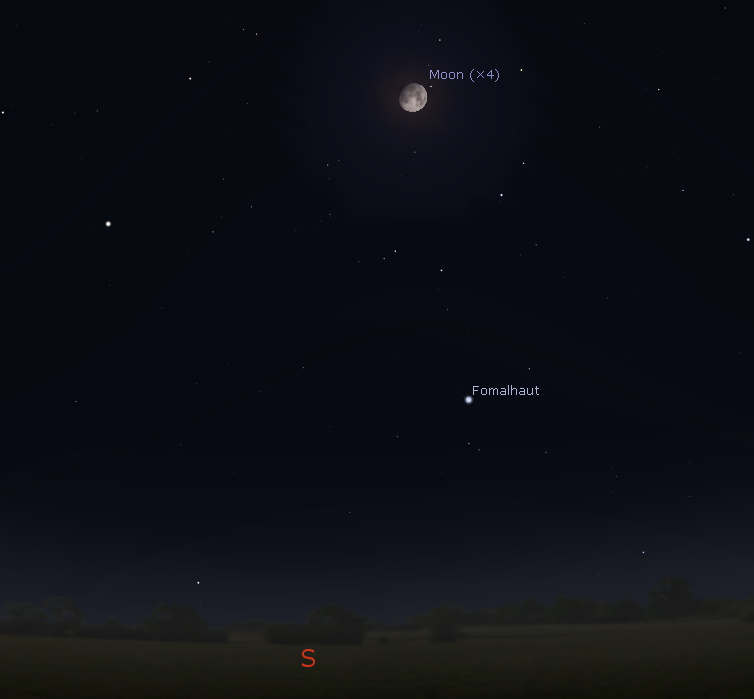 The full Moon appears in the southeastern sky at midnight, Oct. 14th. 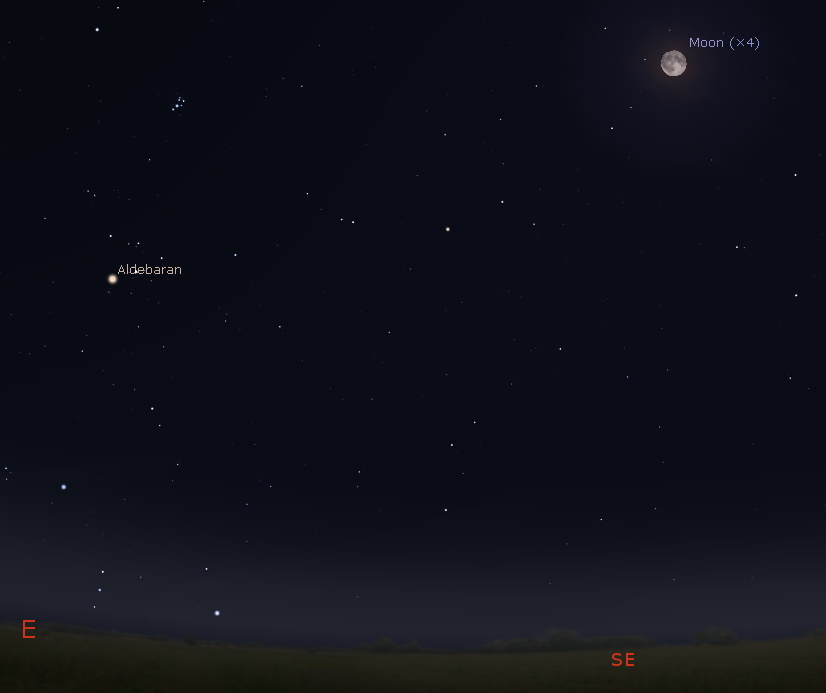 Mars appears a bit higher each morning in the eastern sky just before sunrise.

With an apparent magnitude varying between 2.37 and 2.45, the brightest star in Pegasus is the orange supergiant Epsilon Pegasi, also known as Enif, which marks the horse’s muzzle. Alpha (Markab), Beta (Scheat), and Gamma (Algenib), together with Alpha Andromedae (Alpheratz, once also designated Delta Pegasi) form the large asterism known as the Square of Pegasus. Twelve star systems have been found to have exoplanets. 51 Pegasi was the first Sun-like star discovered to have an exoplanet companion. – Wikipedia

Continuing with my plan to get students in my after-school club to recognize constellations in the nighttime sky just after sunset, I’ve moved to the eastern sky where Pegasus should be easy to spot above the Moon on Oct. 13th – look for the “Great Square.” 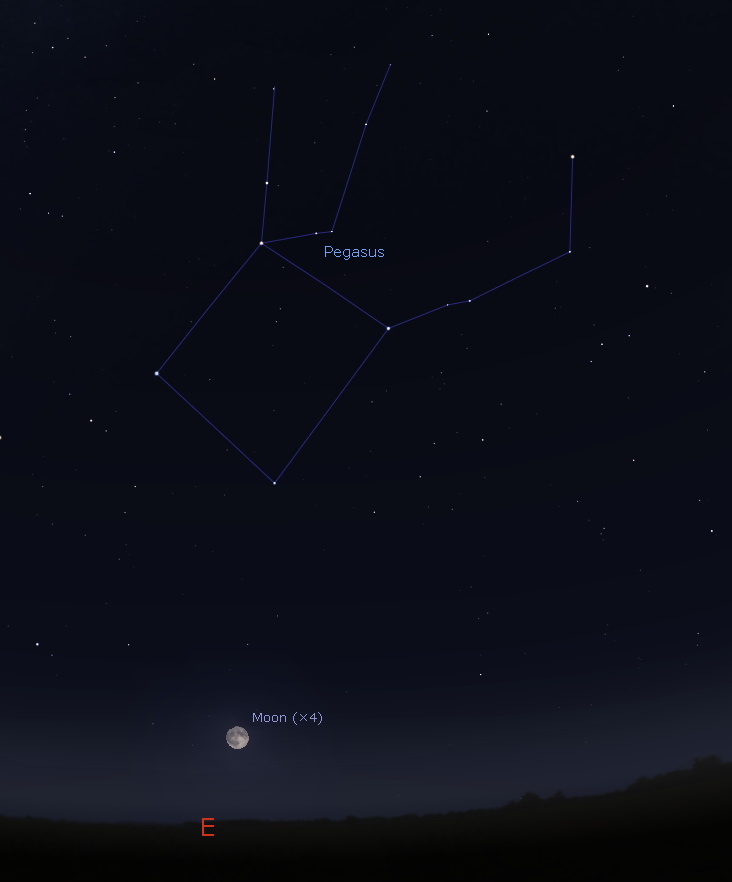 The Western artwork for the constellation Pegasus is that of a winged horse. 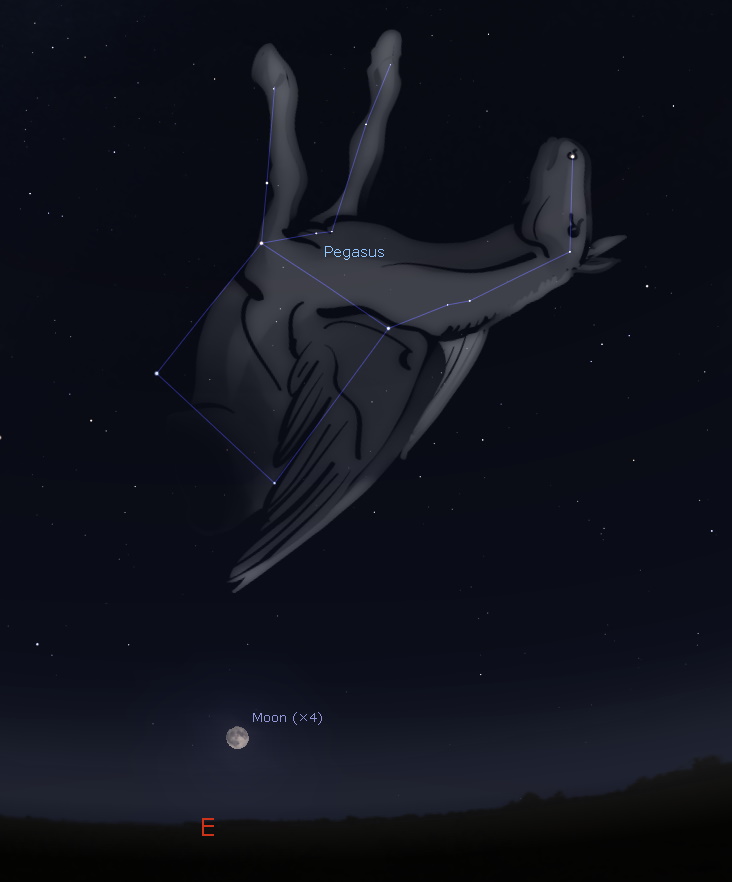 Constellation Pegasus with (with Western artwork shown) in the eastern sky after sunset on Oct. 13, 2019. Credit: Stellarium / Bob Trembley

The globular cluster M15 is in Pegasus, just above the horse’s snout. 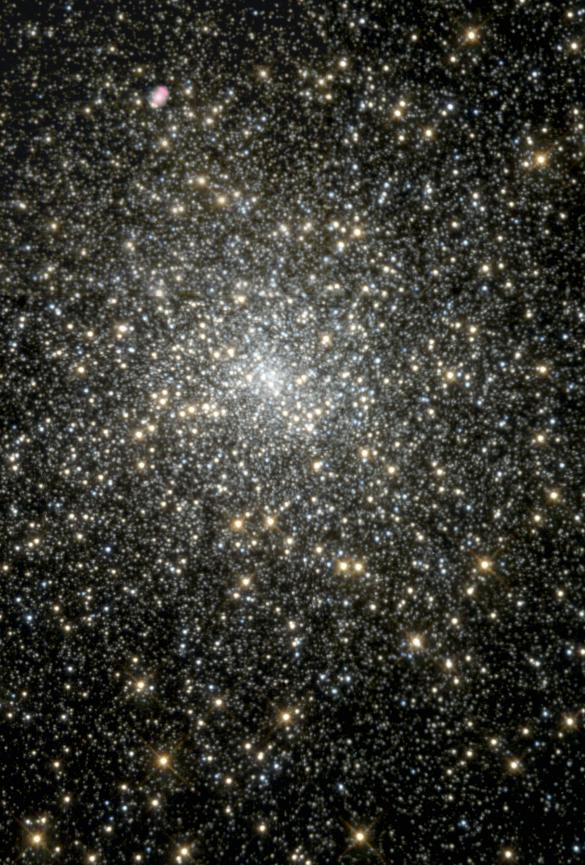 The full  Moon occurs on October 14th, rising at sunset, high in the sky around midnight, and visible all night.

After October 14th, the Moon will be a waning gibbous, rising after sunset, visible high in the sky after midnight, and visible to the southwest after sunrise.

In a request for bids to build a human-rated lunar lander to deliver astronauts to the moon’s south pole in 2024, NASA has dropped requirements for lander reusability and using the planned Gateway mini-space station in lunar orbit. FULL STORY: https://t.co/m5RAK7Fic1 pic.twitter.com/M37FXHZfUg

That emerging spot from last week got a designation: AR2749, but is near impossible to see in visible light. The active region is moving across the face of the Sun, and is visible in ultraviolet light just below the equator offset from the center of the Sun’s face in both images below. The northern coronal hole has remained open and huge for weeks – the southern hole is much less pronounced. 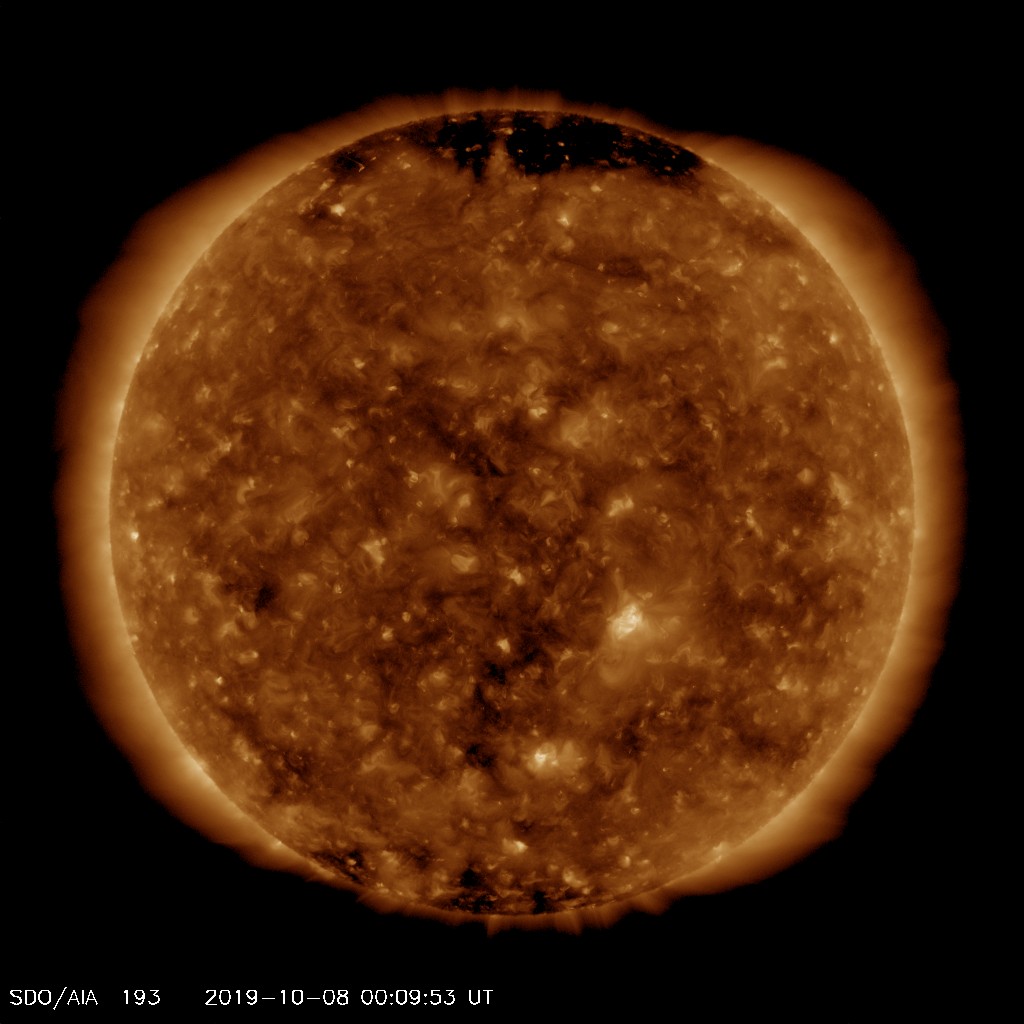 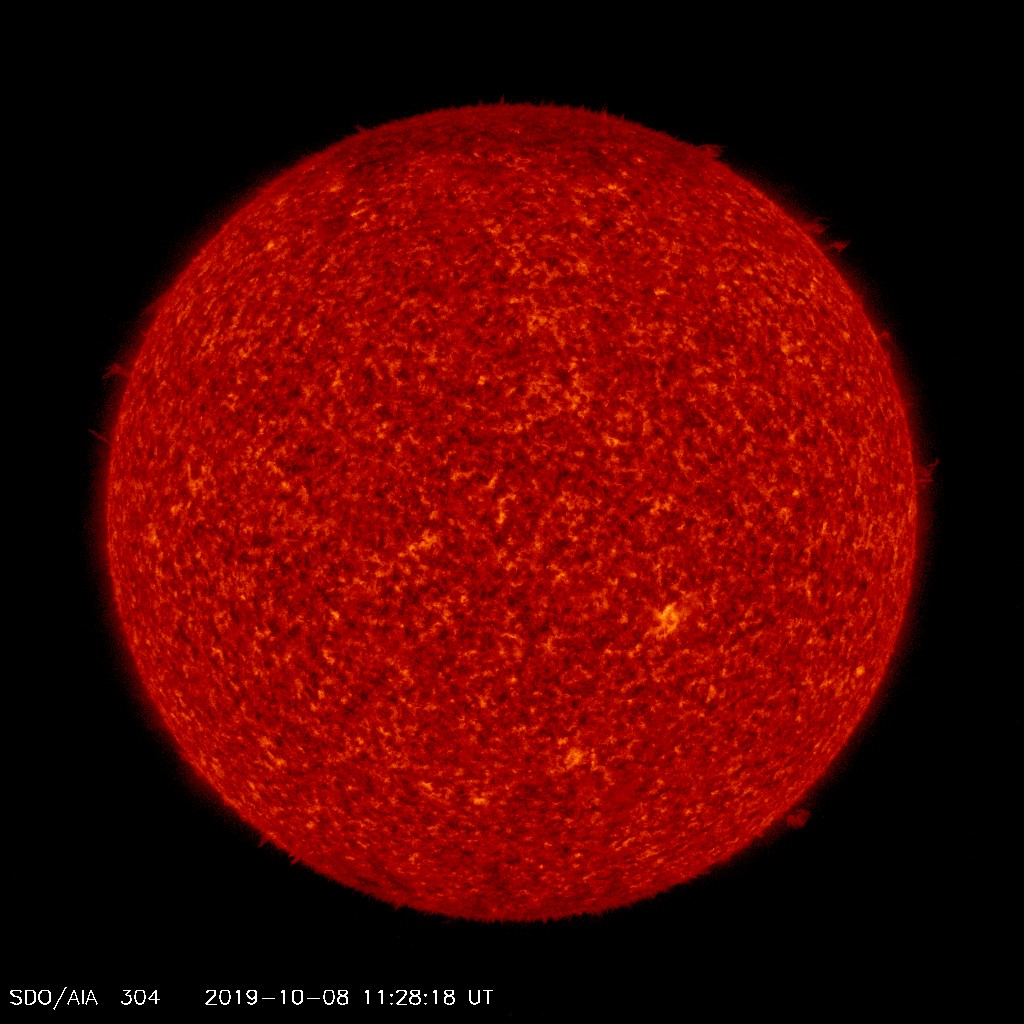 ? Tuesday, Oct. 8, 1pm ET: Tune in for the mission briefing from @NASAKennedy.

Still managed to get some meteors last night. Exeter and Bideford cameras pic.twitter.com/B2GfV04bKi 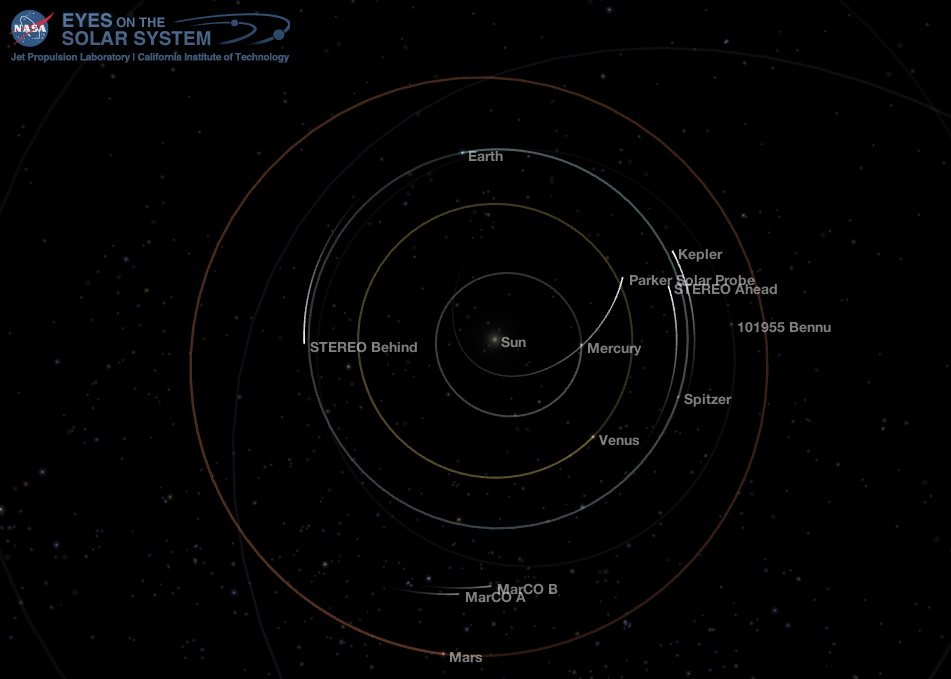 Position of the planets and some spacecraft in the inner solar system, Oct. 8 2019. Credit: NASA Eyes on the Solar System / Bob Trembley. 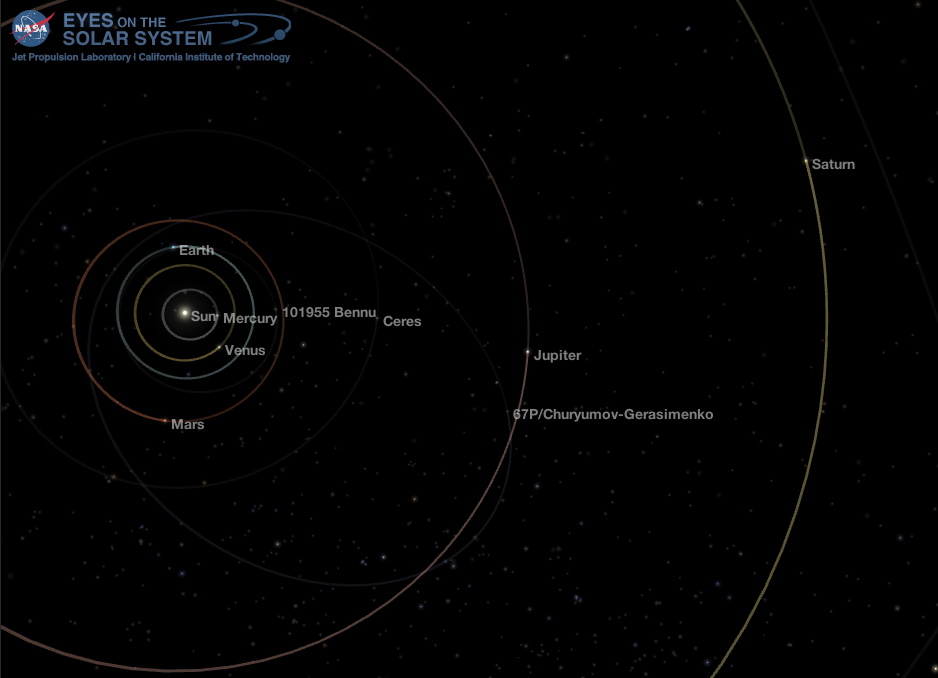 Position of the planets in the middle solar system, Oct. 8, 2019. Credit: NASA Eyes on the Solar System / Bob Trembley. 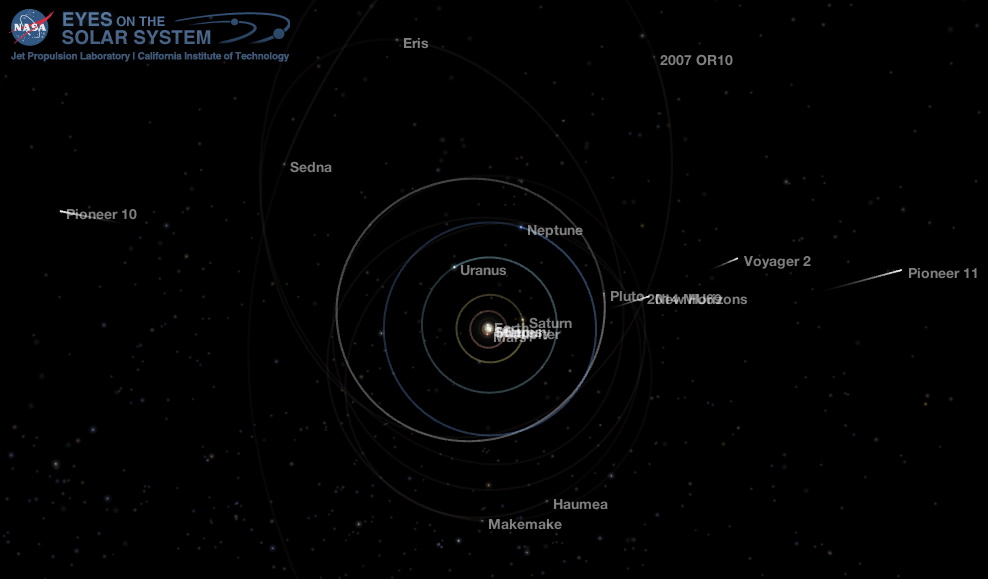 Position of the planets in the outer solar system, Oct. 8, 2019. Credit: NASA Eyes on the Solar System / Bob Trembley.[/