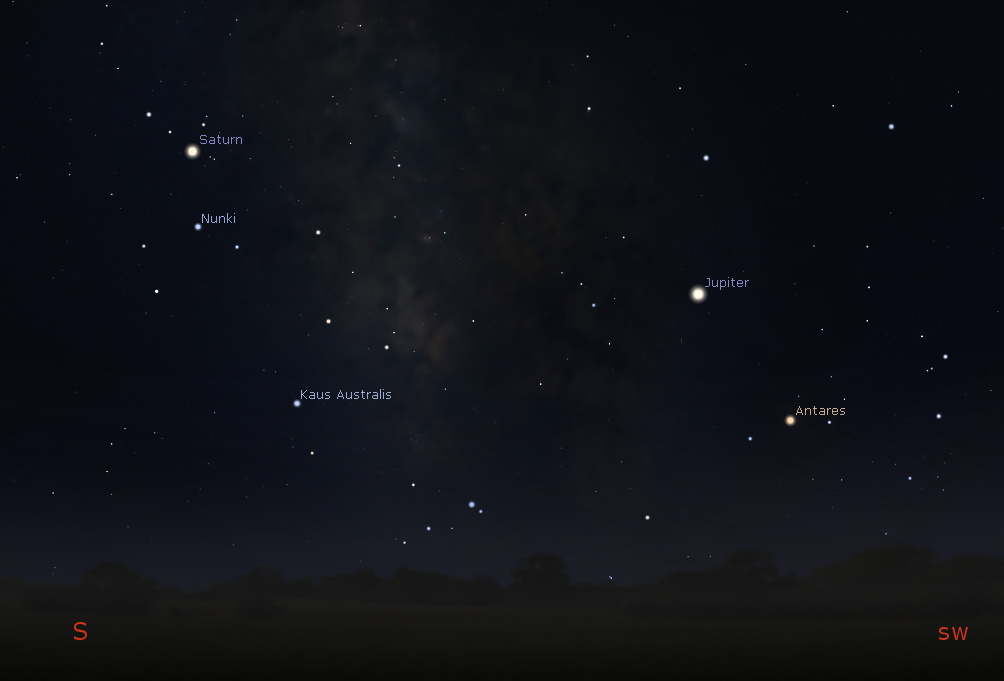 I never got a chance to observe the planet Uranus this last weekend; I was busy non-stop during the Astronomy at the Beach event with my Virtual Reality (VR) gear showing dozens of attendees a VR fly-over of Saturn in OVERVIEW (A Walk Through The Universe); I had a line both evenings. Everyone has been completely blown away by it – from kids to fellow astronomers!  Attendees also got to see Saturn through telescopes on the observing field – which was a wonderful bit of synchronicity.

Now, MORE THAN EVER, I want to get a dozen Windows 10 workstations and VR headsets, so I can show VR educational apps at schools, planetariums, libraries, SF conventions and whatnot! VR is a great way for the public experience the wonders of astronomy – I’ve actually had a couple people GASP as I removed the headset and they had to “come back to reality.”

Broken record again… Saturn, Jupiter and the star Antares are still in the south-southwestern sky all week after sunset…I added the names of two other bright stars, which I’m going to try to see in the sky and remember their names this week.

Saturn, Jupiter and the stars Antares, Nunki and Kaus Australis in the southern sky at 9:00 PM this week. Credit: Stellarium / Bob Trembley.

By midnight, Saturn is low in the southwestern sky, and star Fomalhaut is in the southern sky. Fomalhaut has a planet orbiting it, Dagon, which I discuss in the Exoplanet section below.

The star Fomalhaut and Saturn in the south-southwestern sky at midnight this week. Credit: Stellarium / Bob Trembley

The Moon will be in the southern predawn sky with the constellations Orion and Taurus for several days this week. 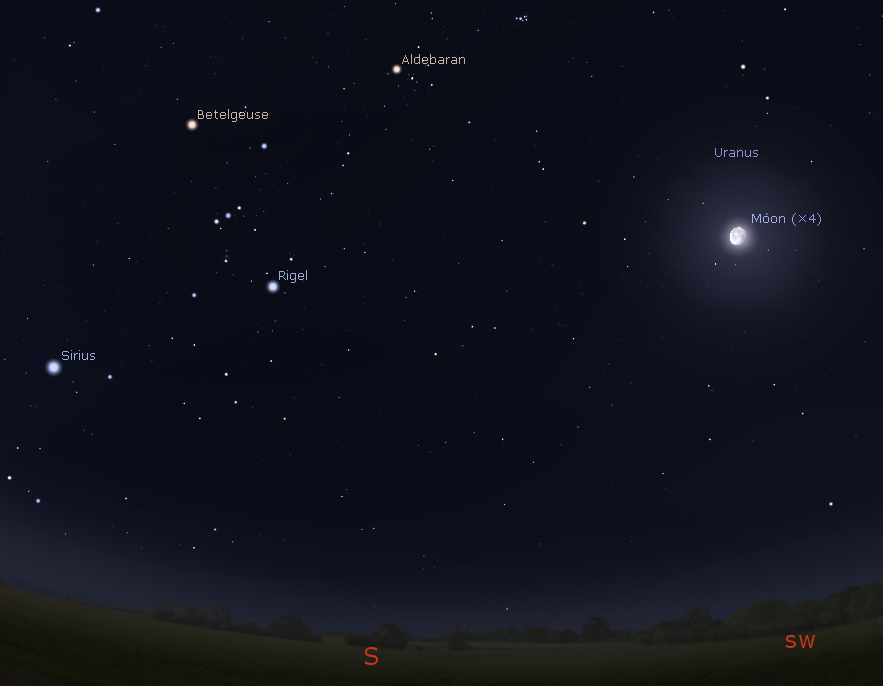 The Moon will be near the constellations Taurus and Orion in the southern predawn sky on Sept. 17th. Credit: Stellarium / Bob Trembley

The Moon will be close to the star Aldebaran on September 20th. 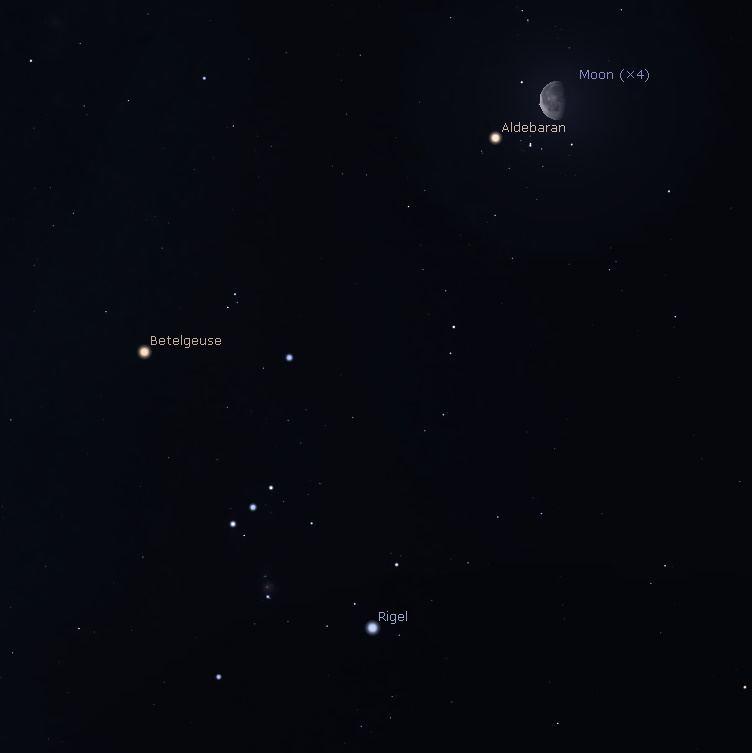 The Moon near the star Aldebaran high in the southern predawn sky on Sept. 20, 2019. Credit: Stellarium / Bob Trembley

By September 23rd, the Moon will be high in the southern sky, close to the star Pollux.

The Moon somewhat near the star Pollux high in the southern predawn sky on Sept. 23, 2019. Credit: Stellarium / Bob Trembley

The full Moon is all alone in the southern sky at midnight on September 14th. 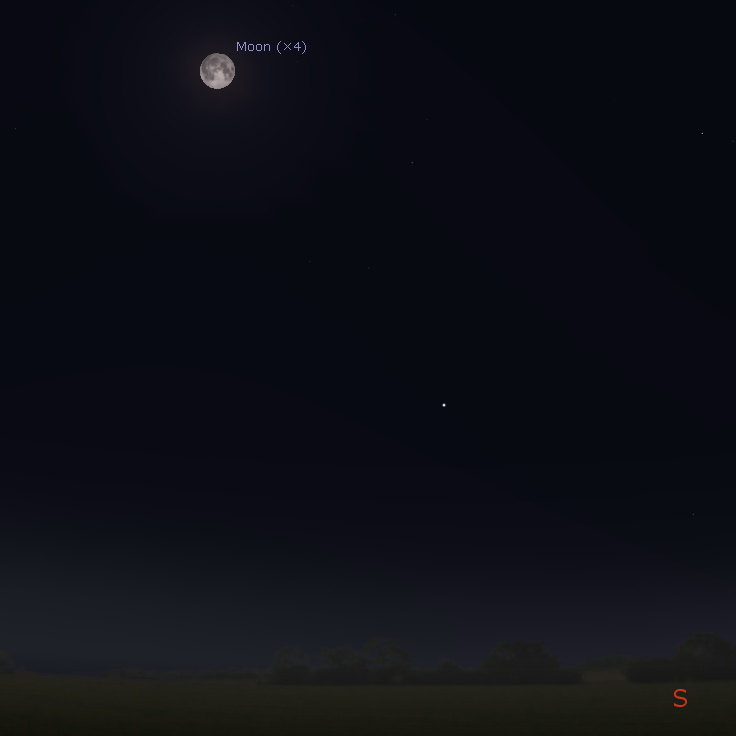 The full Moon in the southern sky at midnight on Sep. 14, 2019. Credit: Stellarium / Bob Trembley. 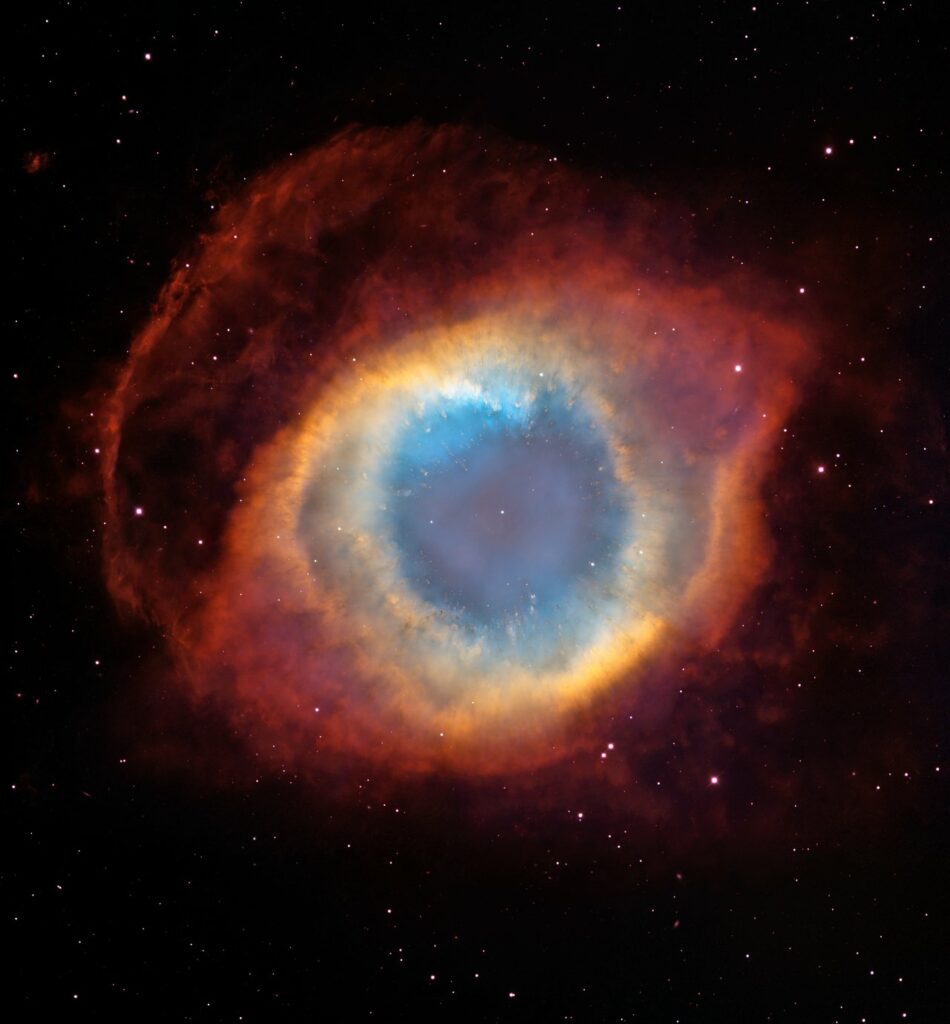 This composite image is a view of the colorful Helix Nebula taken with the Advanced Camera for Surveys aboard NASA/ESA Hubble Space Telescope and the Mosaic II Camera on the 4-meter telescope at Cerro Tololo Inter-American Observatory in Chile. The object is so large that both telescopes were needed to capture a complete view. The Helix is a planetary nebula, the glowing gaseous envelope expelled by a dying, sun-like star. The Helix resembles a simple doughnut as seen from Earth. But looks can be deceiving. New evidence suggests that the Helix consists of two gaseous disks nearly perpendicular to each other. Credit: NASA, ESA, C.R. O’Dell (Vanderbilt University), and M. Meixner, P. McCullough, and G. Bacon ( Space Telescope Science Institute)

The Helix Nebula, also known as NGC 7293, is a planetary nebula located in the constellation Aquarius. Discovered by Karl Ludwig Harding, probably before 1824, this object is one of the closest to the Earth of all the bright planetary nebulae. The distance, measured by the Gaia mission, is 655±13 light-years. It is similar in appearance to the Cat’s Eye Nebula and the Ring Nebula, whose size, age, and physical characteristics are similar to the Dumbbell Nebula, varying only in its relative proximity and the appearance from the equatorial viewing angle. The Helix Nebula has sometimes been referred to as the “Eye of God” in pop culture, as well as the “Eye of Sauron“.

The Helix Nebula is an example of a planetary nebula, formed by an intermediate to low-mass star, which sheds its outer layers near the end of its evolution. Gases from the star in the surrounding space appear, from our vantage point, as if we are looking down a helix structure. The remnant central stellar core, known as a planetary nebula nucleus or PNN, is destined to become a white dwarf star. The observed glow of the central star is so energetic that it causes the previously expelled gases to brightly fluoresce.

The nebula is in the constellation of Aquarius, and lies about 650 light-years away, spanning about 0.8 parsecs (2.5 light-years). Its age is estimated to be ~10,600 years, based on its measured expansion rate of 31 km/s.– Paraphrased from Wikipedia

Here’s the location of the Helix Nebula in the southern sky; use the star Fomalhaut as a guide: 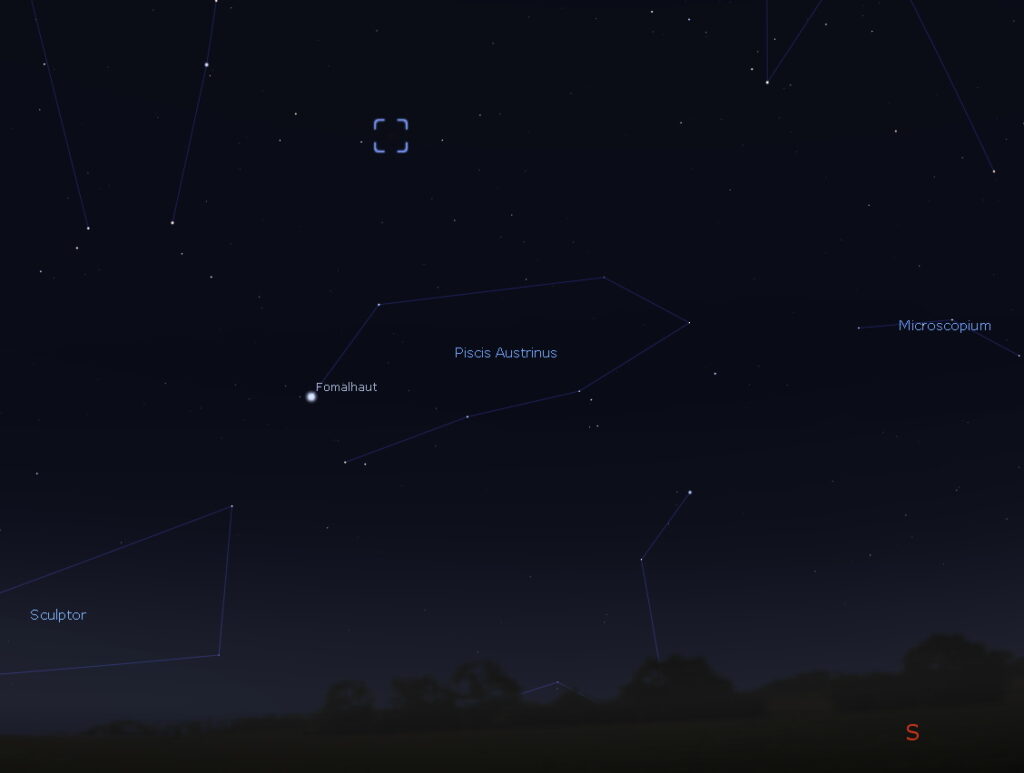 Here’s a close-up of the location of NGC 7293 showing a couple bright stars to use as guides. 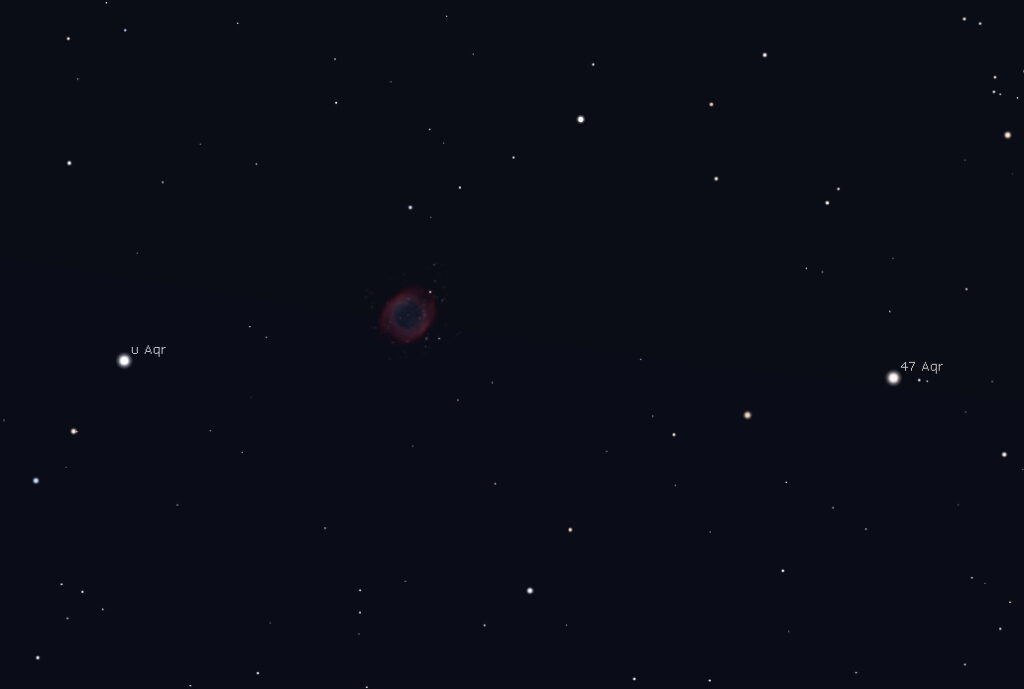 Close-up of the location of NGC 7293 – the Helix Nebula Credit: Stellarium / Bob Trembley

Here’s an image of the Helix Nebula seen in multiple frequencies from multiple space telescopes: 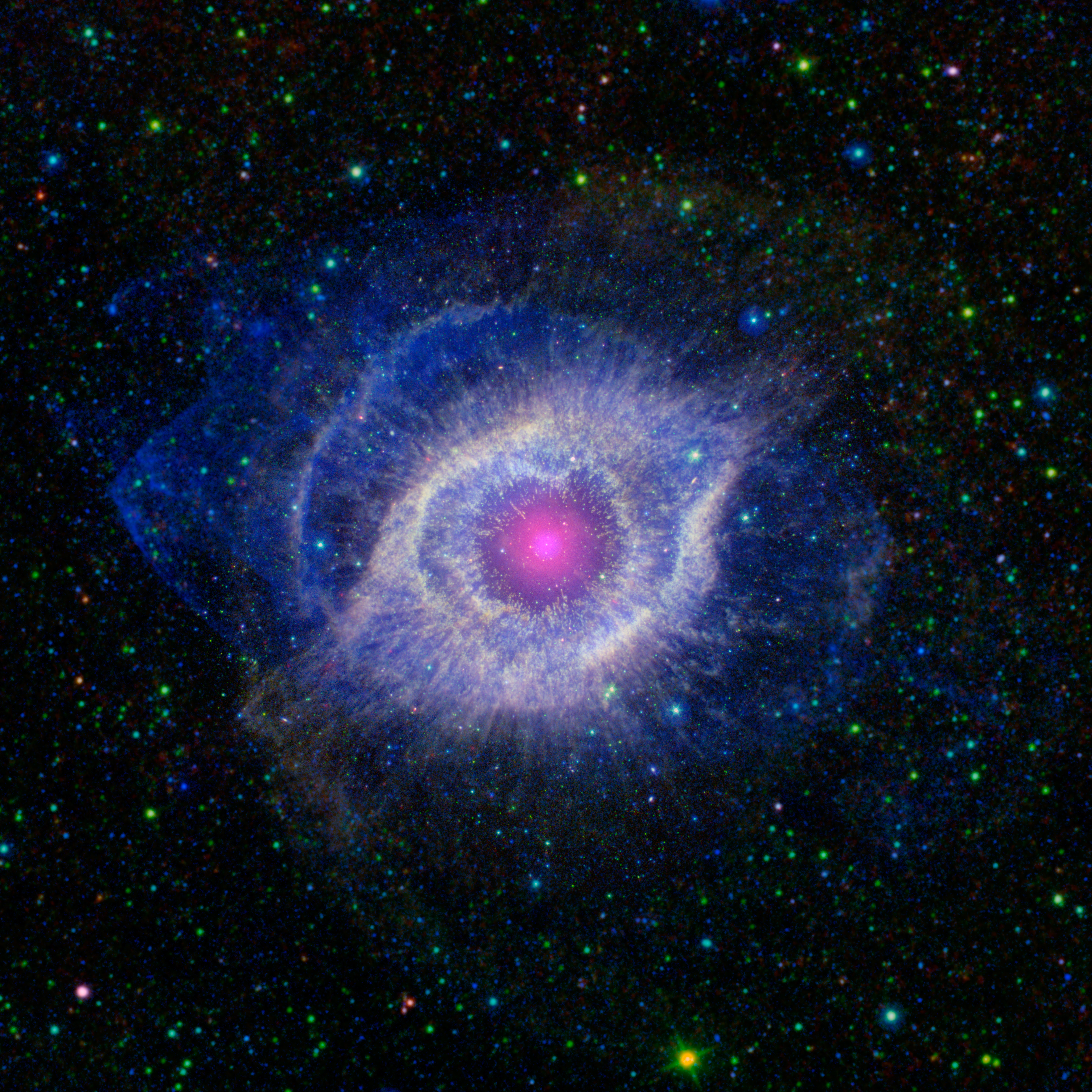 Multifrequency composite image of the Helix nebula: infrared from the Spitzer space telescope – central nebula is rendered in green (wavelengths of 3.6 to 4.5 microns) and red (8 to 24 microns), with WISE data covering the outer areas in green (3.4 to 4.5 microns) and red (12 to 22 microns). Ultraviolet data from GALEX appears as blue (0.15 to 2.3 microns). Image Credit: NASA/JPL-Caltech

The third-quarter Moon occurs on  September 22nd, rising around midnight, and visible to the south after sunrise.

After September 22nd, the Moon will be a waning crescent, visible low to the east before sunrise – my favorite in the morning with coffee!

The Sun has been spot-free for 14 days; large coronal holes remain open at both poles. 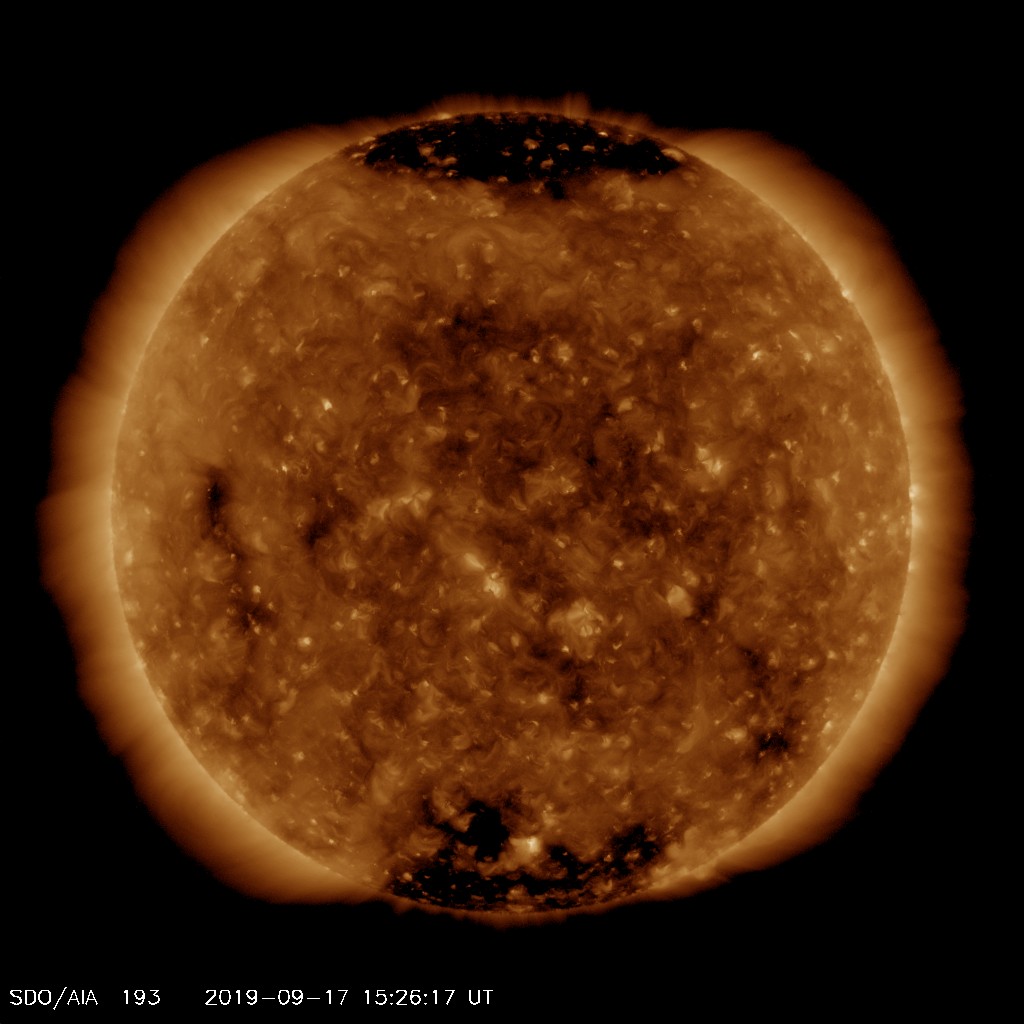 Light prominence activity for the last couple days – but enough for some astrophotos! 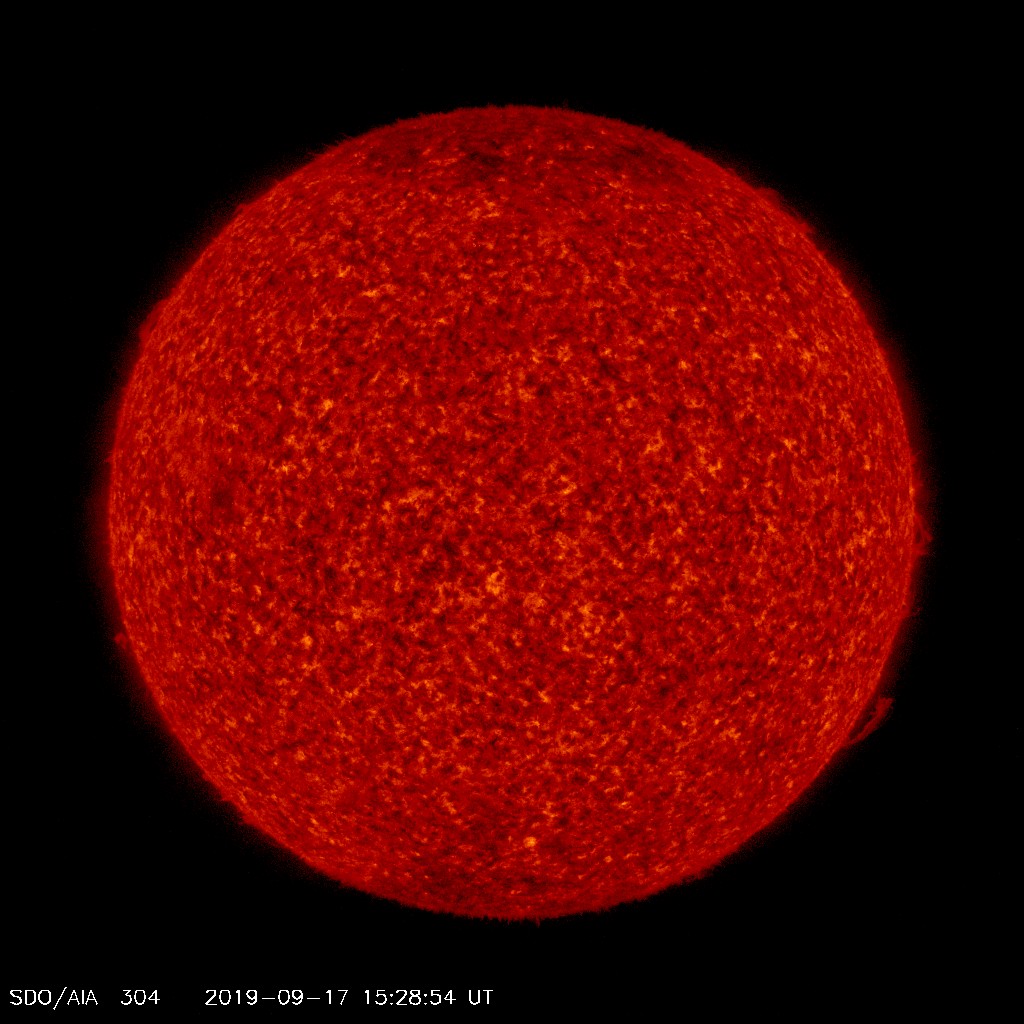 Media accreditation is open to attend the launch of our Ionospheric Connection Explorer on Oct. 9! ?? The deadline to apply is 4:30 p.m. EDT on Friday, Sept. 20. Details: https://t.co/IeBdaJGQox #NASAICON pic.twitter.com/QTt94PYjIK

Charged particles in Earth’s atmosphere – which make up the ionosphere – create bands of color above Earth’s surface, known as airglow. ICON, depicted in this artist’s concept, will study the ionosphere from a height of about 350 miles to understand how the combined effects of terrestrial weather and space weather influence this ionized layer of particles. Credit: NASA Goddard’s Conceptual Image Lab/B. Monroe

A very bright daytime fireball wa spotted over the North Sea on September 12, 2019 around around 12:50 UT, originating almost 500 reports. This is possibly the most unusual one, by Kitte Buddy Youtube channel [full story and full video: https://t.co/dITwujDkN6] pic.twitter.com/1qHjSKRYuV

Position of the planets and a couple bodies in the inner solar system: 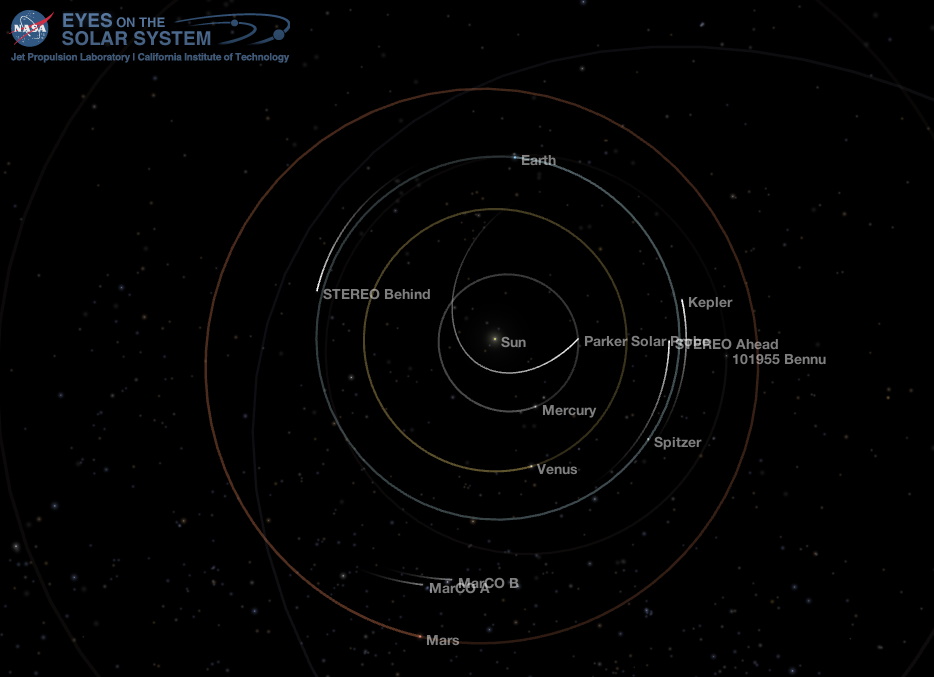 Position of the planets and some spacecraft in the inner solar system, Sep. 17, 2019. Credit: NASA Eyes on the Solar System / Bob Trembley. 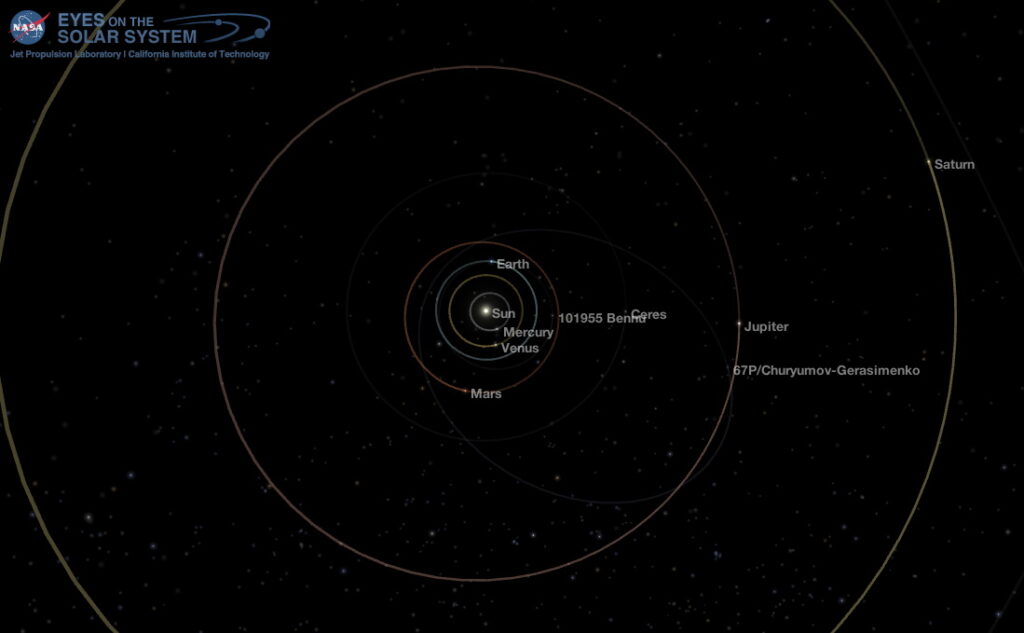 Position of the planets in the middle solar system, Sep. 17, 2019. Credit: NASA Eyes on the Solar System / Bob Trembley.

Position of the planets and a couple bodies in the outer solar system: 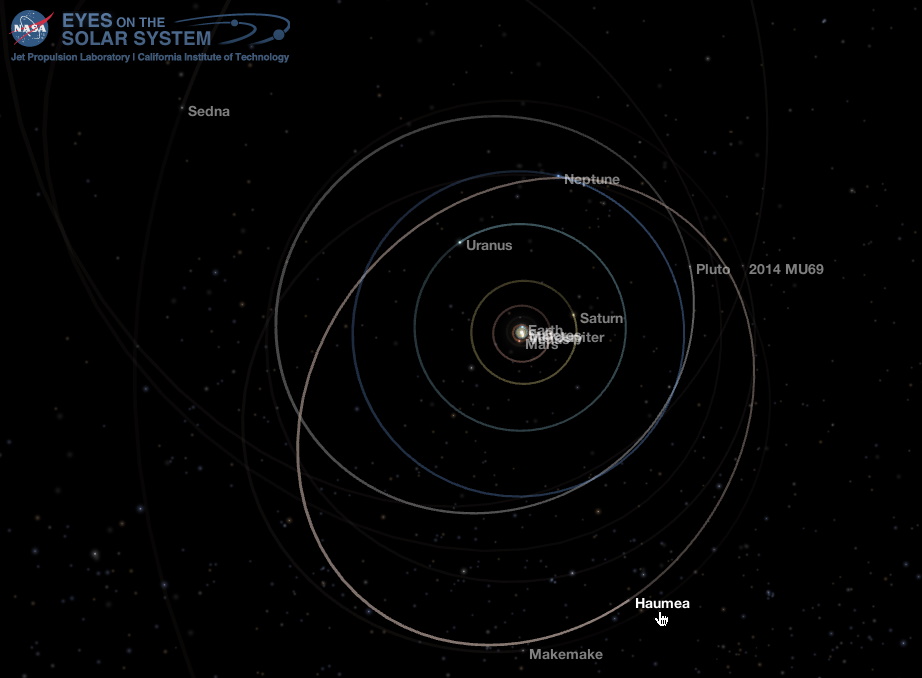 Position of the planets in the outer solar system, Sep. 17, 2019 – the orbit of dwarf planet