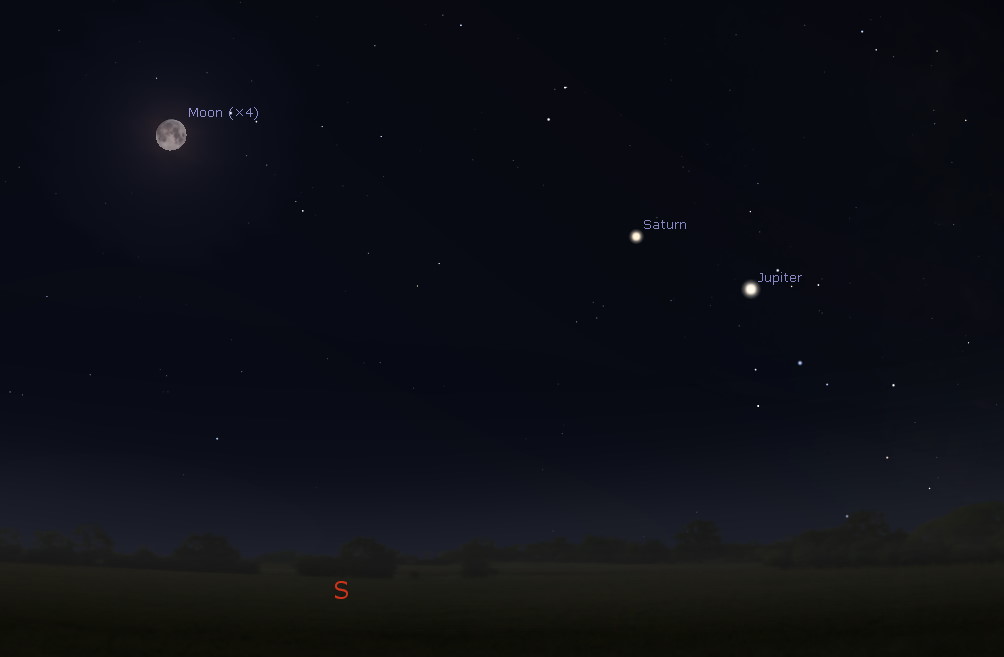 My wife is home recuperating from her appendectomy; she’s healing well and starting to feel better – so naturally, she’s overdoing it… She’s been spending a lot of time in the recliner in the basement, with the parrots and I. Andromeda, our Senegal parrot has been simply loving all the time she’s been spending with Connie!

Saturn and Jupiter appear in the southern sky after sunset, moving to the southwest in the late evening and early morning hours; the pair of planets set shortly after 2:00 AM.

The Moon appears in the sky above the bright star Fomalhaut for a good part of the night; Fomalhaut rises in the southeast around 10:00 PM, and sets in the southwest around 5:00 AM. 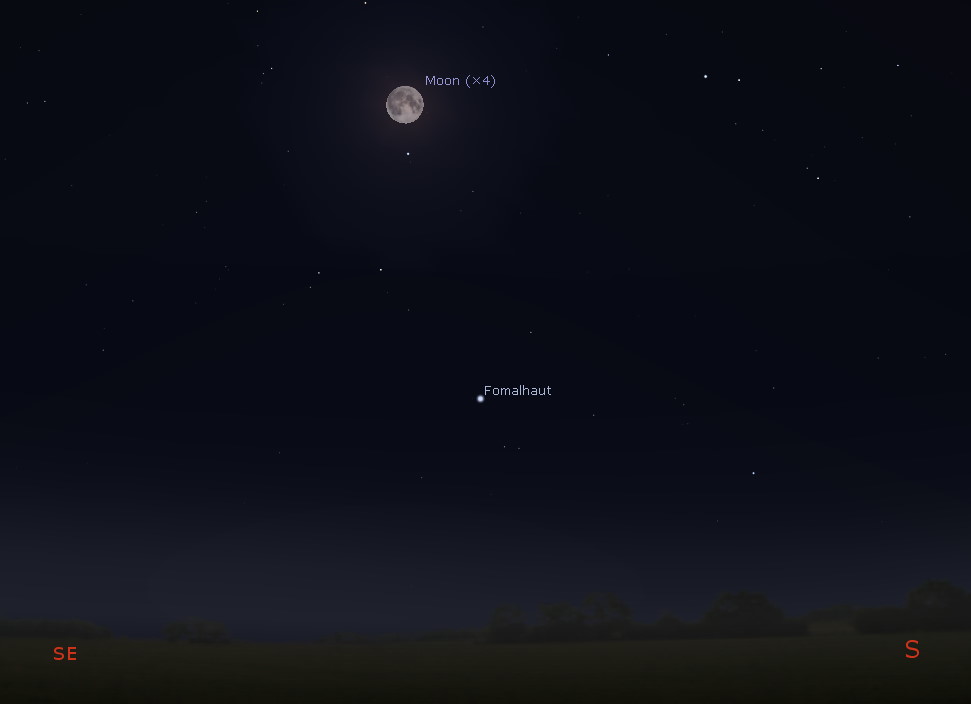 The Moon appears in the south-southeastern sky with the star Fomalhaut at midnight on Sept. 2nd. Credit: Stellarium / Bob Trembley.

Mars rises in the east around 10:00 PM, and appears high in the southwestern sky at sunrise. The Moon appears in a very close conjunction with Mars in the early morning hours of Sept. 6th. 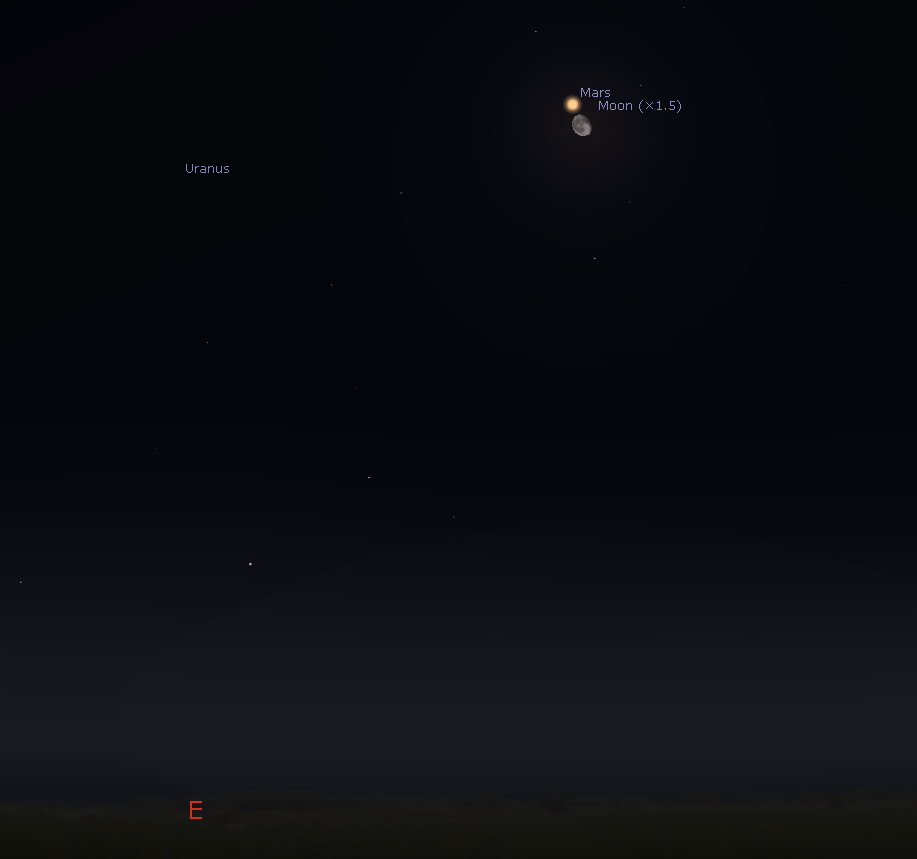 There will be a very close conjunction of the Moon and Mars in the eastern sky during the early morning hours on Sept. 6th. Credit: Stellarium / Bob Trembley.

Here’s a close-up of the Mars-Moon conjunction: 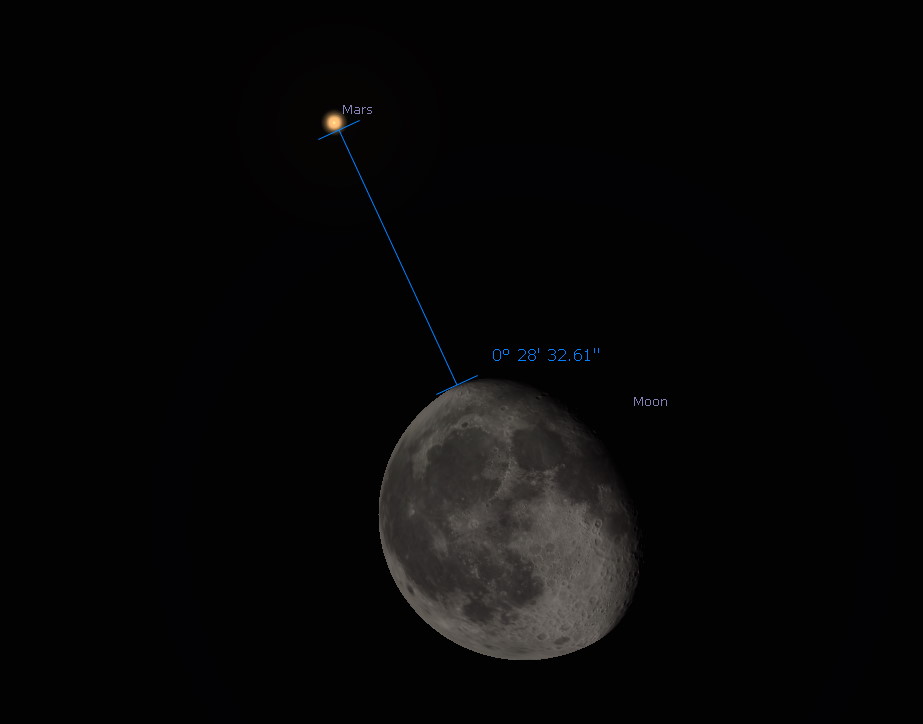 The Moon will be less than 1 degree from Mars in the eastern sky during the early morning hours on Sept. 6th. Credit: Stellarium / Bob Trembley.

Venus and several stars make a temporary asterism spanning the eastern predawn sky on Sept. 2nd; Venus moves northward and down towards the horizon over the next few days breaking the asterism up. 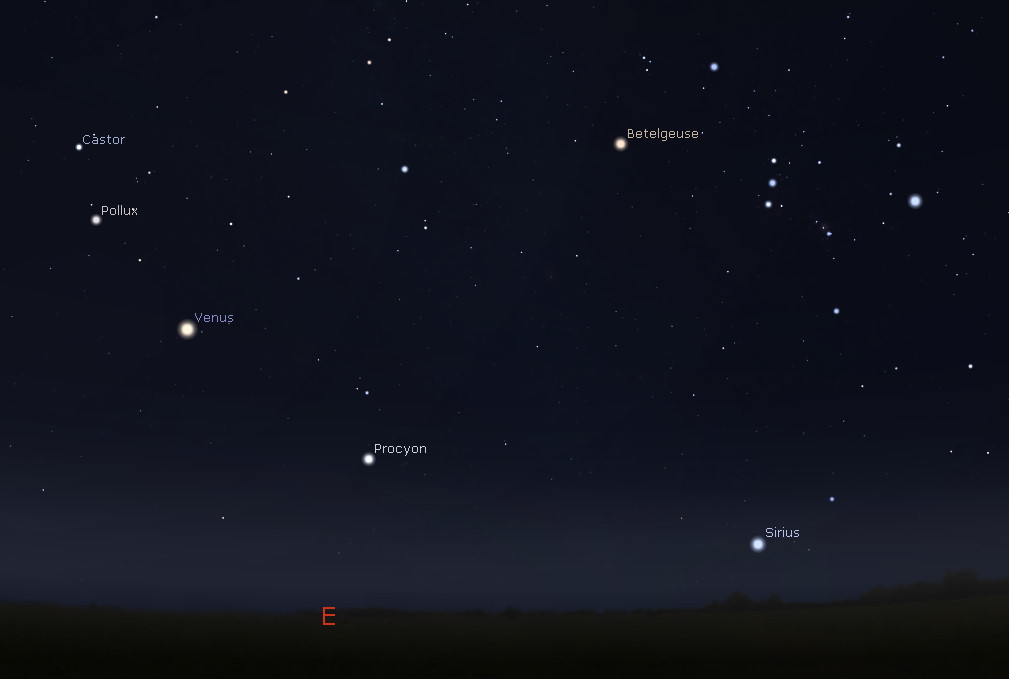 The full Moon occurs on Sept. 3rd, rising at sunset, visible high in the sky around midnight, and visible all night long.

After Sept. 3rd, the Moon will be a waning gibbous, rising after sunset, visible high in the sky after midnight, and visible to the southwest after sunrise.

NASA's Artemis program is taking humans back to the Moon by 2024. The space agency has confirmed that the next person to set foot on lunar soil will be a woman. These are the possible astronauts. pic.twitter.com/ULYQtZX63J

The Sun remains spot-free; the northern coronal hole is monstrous, with a small friend just to the south. The coronal hole at the Sun’s south pole appears to have diminished. 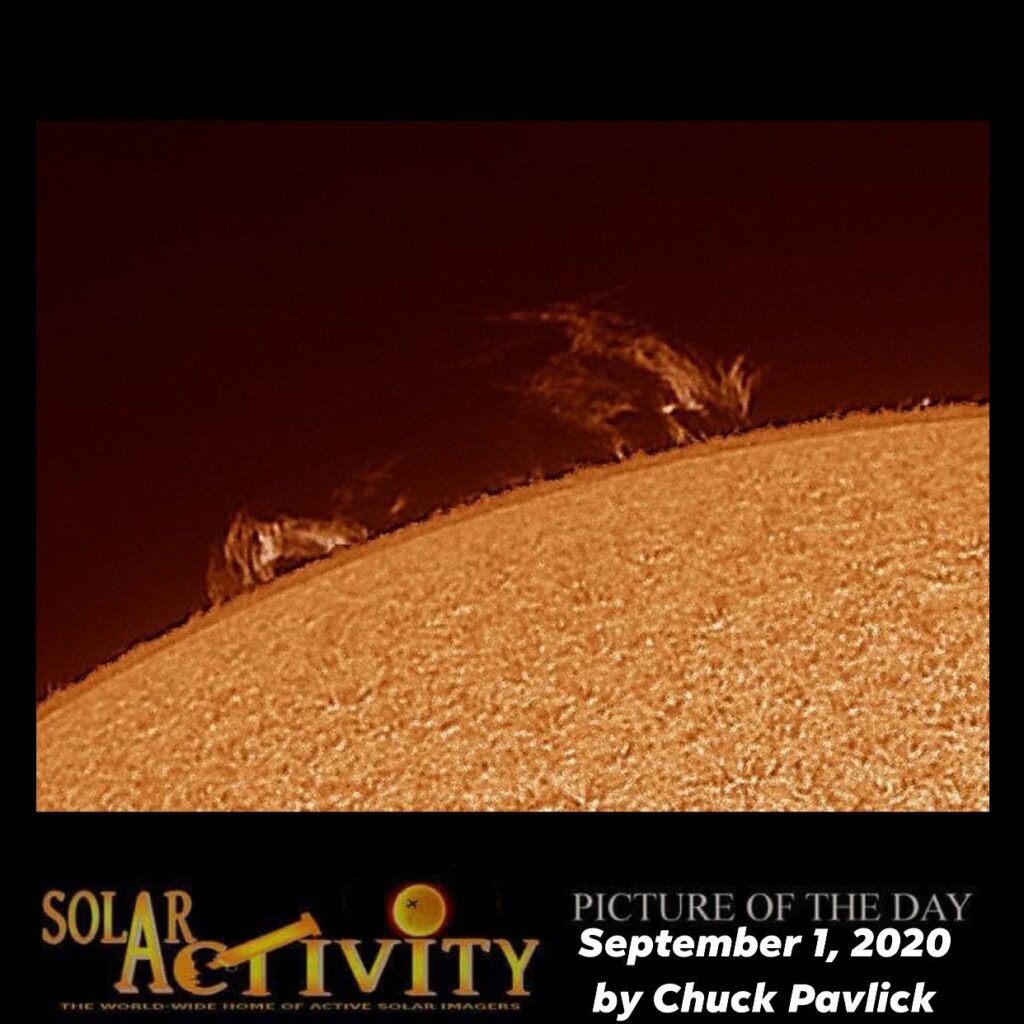 SOLARACTIVITY PICTURE OF THE DAY for September 1, 2020 goes out to Chuck Pavlick.
Equipment details: “Proms from this morning 8-31-20. taken with the Lunt 60 and ASI 1600mm camera.”

A novel, highly-reflective coating could one day help spacecraft get within about half a million miles from the Sun — even closer than #ParkerSolarProbe, which will fly about 4 million miles from our star! More about this @NASA_Technology concept: https://t.co/udnd5eP0MM pic.twitter.com/iueGhVgQ71

I am reminded of the 1980 SF novel: Sundiver by David Brin.

Looking at 2018 VP1's trajectory on the JPL Small Body Database Browser, it comes to just within, and well above the Moon's orbit – not what I consider "extremely close…" pic.twitter.com/a054fQpiVi 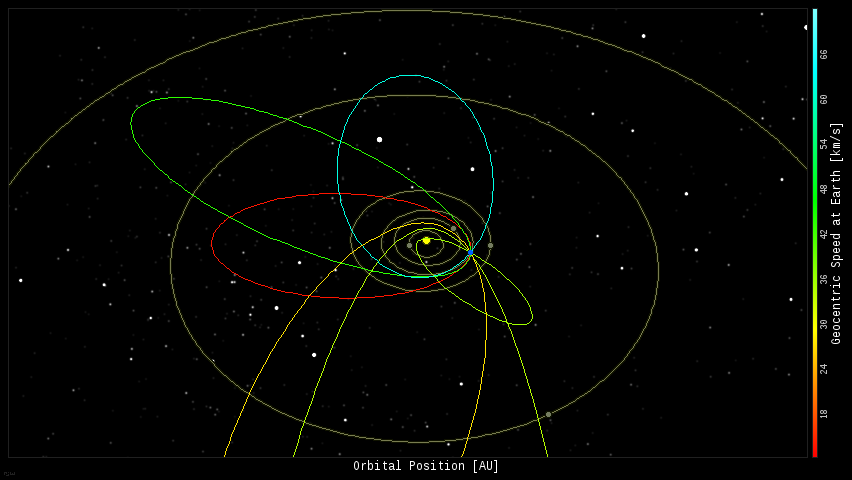 Meteorite recovered after breaking through bamboo ceiling in Pernambuco, Brazil. 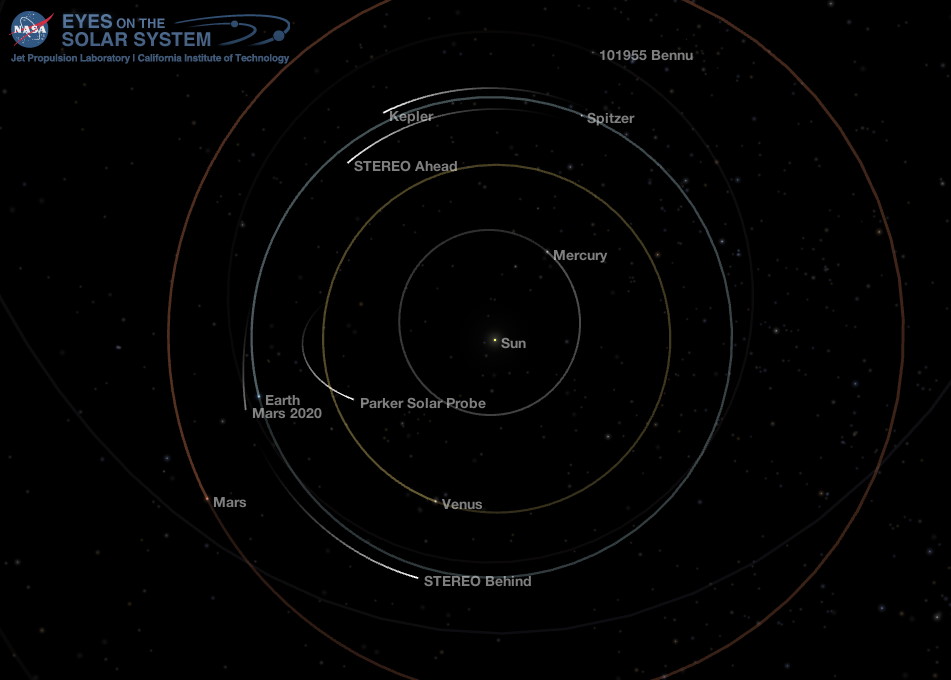 Position of the planets and a couple spacecraft in the inner solar system, 2020-09-01. Credit: NASA Eyes on the Solar System / Bob Trembley. 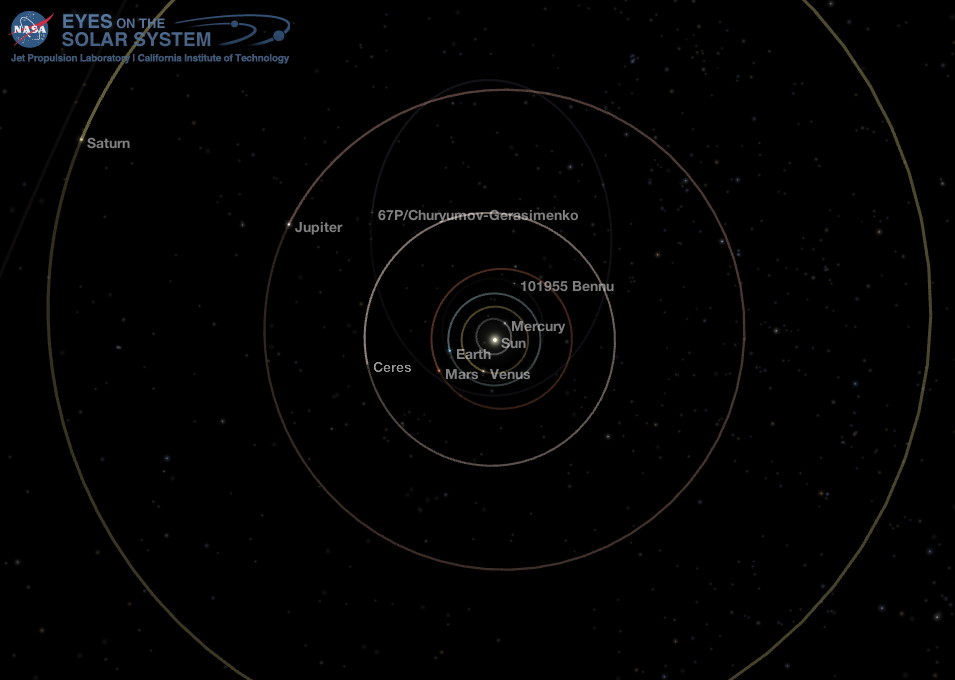 Position of the planets in the middle solar system, 2020-09-01. Credit: NASA Eyes on the Solar System / Bob Trembley.

Position of the planets, some dwarf planets and some transneptunian objects in the outer solar system – dwarf planet Sedna is highlighted: 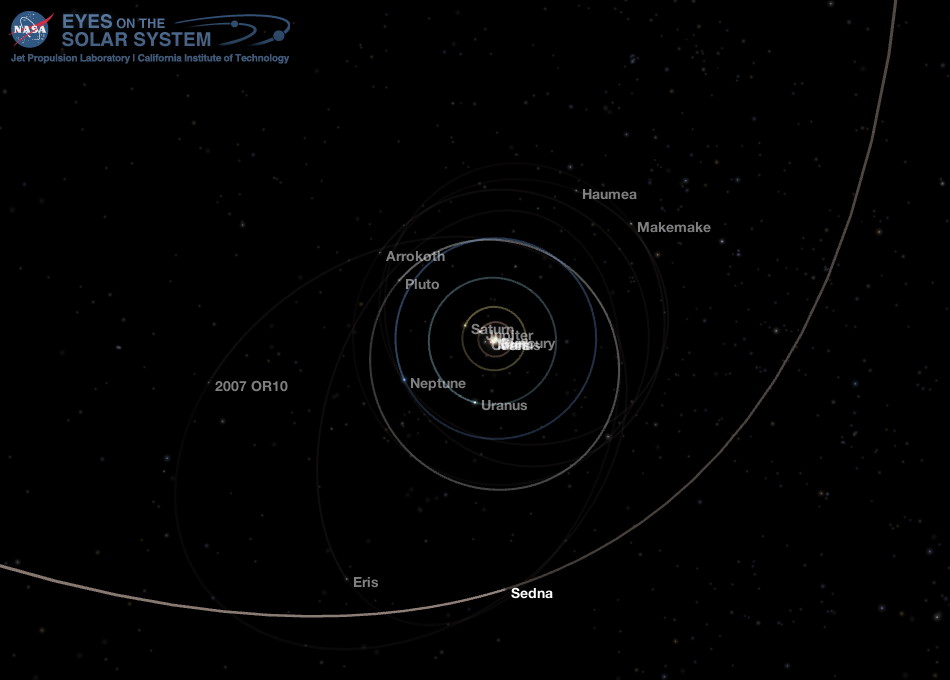 Position of the planets and some transneptunian objects in the outer solar system, 2020-09-01 – trans-Neptunian object Sedna is highlighted, currently near its perihelion. Credit: NASA Eyes on the Solar System / Bob Trembley. 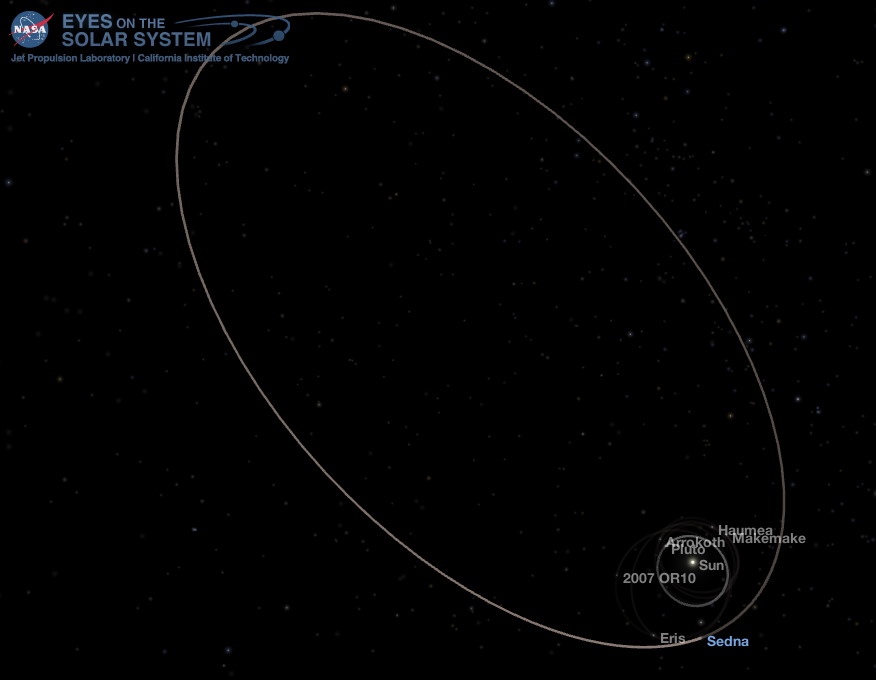 Lucy has passed Key Decision Point D! We are now officially approved to move on to phase D, where we assemble, test and launch this spacecraft! ?https://t.co/KEpns8Gd4o

It's only 100 days before we return to Earth! ?? Hayabusa2 is now 50 million km from Earth and it takes ~5.5 mins (round trip) to communicate with the spacecraft. We will continue to modify the trajectory (TCM) to deliver the capsule safely to Woomera, Australia on December 6! pic.twitter.com/x842YUH3iK

WOW! This is SO cool! Students can design and build an experiment that will go to the ISS, stay there for 30 days, and return! I am “bouncing in my chair” excited about this! Do you think I can pass myself off as a K-12 student?

#Artemis Generation collegiate students can fly research to the @Space_Station!?

Join us tomorrow, 9/3 at 5pm ET for a webinar to learn about this #STEMonStation opportunity – or visit the SPOCS website!

LIVE NOW ?
Come meet our engineer Michelle Colizzi and learn more about the capsule she worked on that keeps @NASAPersevere safe in space. https://t.co/ehcB87Ecss pic.twitter.com/C9m9vdp7dM

Earth-observing instruments on @NASA satellites and aircraft are mapping the current fires in California, providing critical data products to agencies on the ground that are responding to the emergency. https://t.co/B8pP9QwbDH pic.twitter.com/5Xf5DSAQUg

As Earth warms, glaciers all over the globe are melting and retreating, forming pools of water called glacial lakes. The volume of these lakes has increased by 50% since 1990, due to climate change. https://t.co/UqPja8IhKQ

The @NASA / @JAXA_en GPM satellite flew over #HurricaneLaura last night at 10pm CT shortly before landfall, capturing this 3D data on the structure and intensity of precipitation within the storm. Learn more: https://t.co/Od3I2HYGvX pic.twitter.com/URACrNKFlU

Congrats to Utah's @east_state for being designated as an IDSPark. Utah now has more IDA-certified state parks than any other U.S. state! East Canyon is located about 20 miles from Salt Lake City, which means it’s readily accessible to millions of people!https://t.co/fQFtWZ5GdF

#HubbleClassic The Southern Pinwheel Galaxy is ablaze with star formation.

New stars are born in glowing, pink clouds of gas along the edges of the galaxy's dark, spiraling dust lanes. Also called M83, the galaxy is one of the brightest in our night sky: https://t.co/YxjugEc8jr pic.twitter.com/RzisLFxoQc

Continuing with my visual tour of nearby stars and their systems, we travel to the Gliese 674 system, about 15 light years distant. 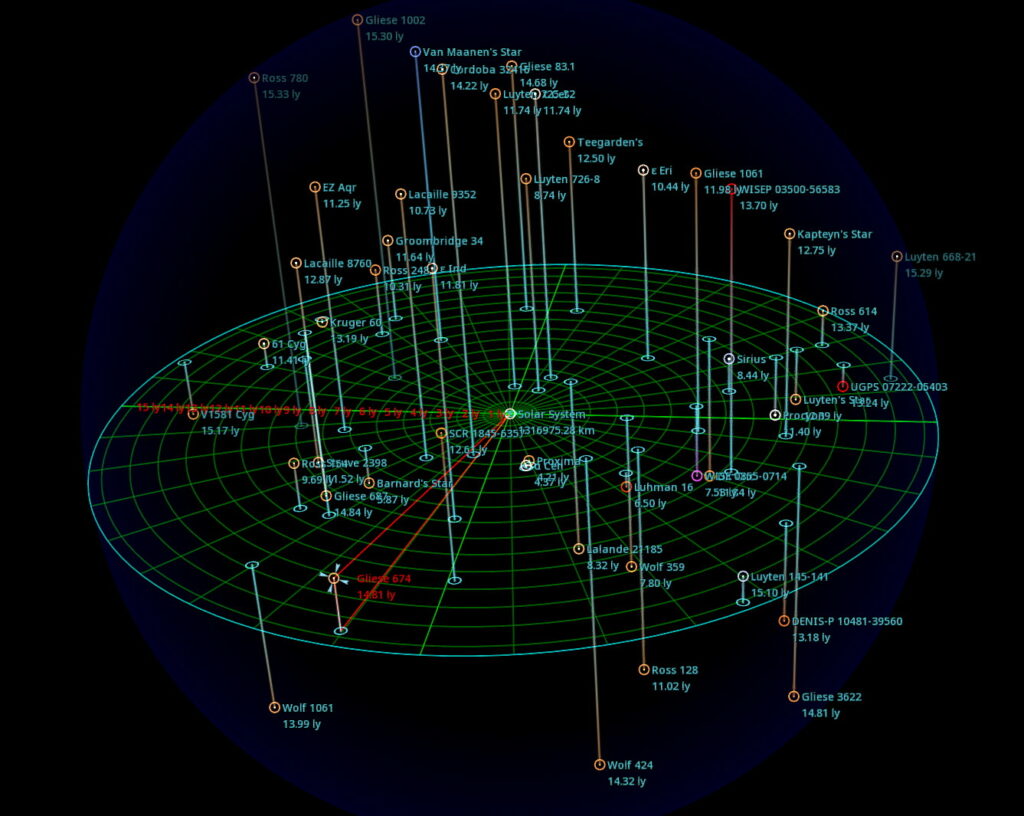 Gliese 674 is about 14 light years from Sol; the plane (green) is aligned with the orientation of the plane of the Milky Way galaxy. Credit: SpaceEngine / Bob Trembley.

Gliese 674 (Gliese–Jahreiß 674) is a pre-main-sequence red dwarf approximately 15 light years away in the southern constellation of Ara. Gliese 674, as is typical for young red dwarfs, is strongly active, with regular ultraviolet flares. As of 2019, the strongest ultraviolet flare detected had a total energy of 5.6*1023 joules and a duration of a few hours.

On January 7, 2007, Bonfils used the HARPS spectrograph in ESO and found an intermediate mass planet orbiting close to the red dwarf star in an unusually eccentric orbit.- Wikipedia 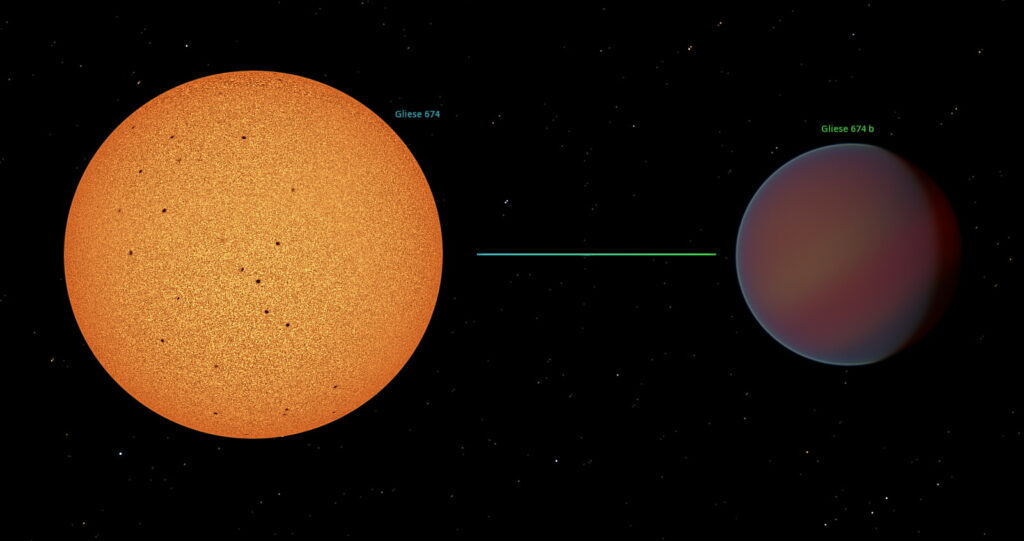 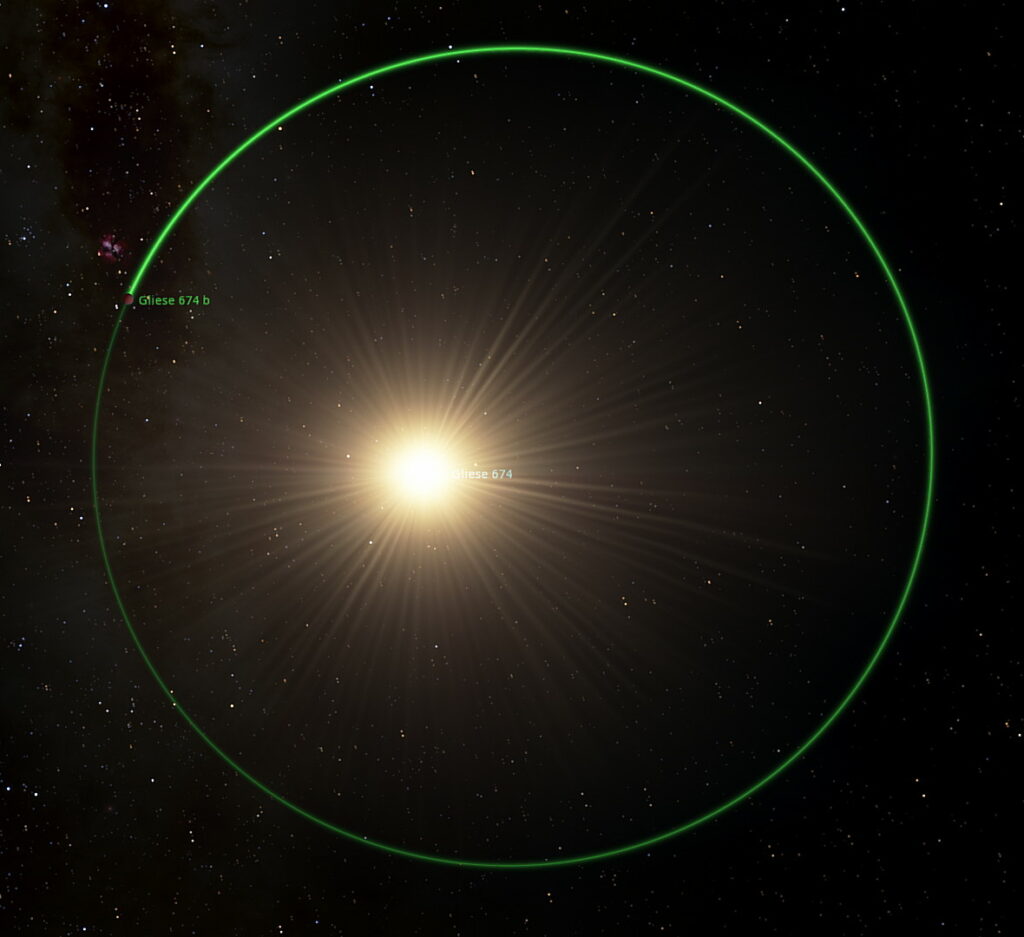 Artist’s Renderings of the Gliese 674 system 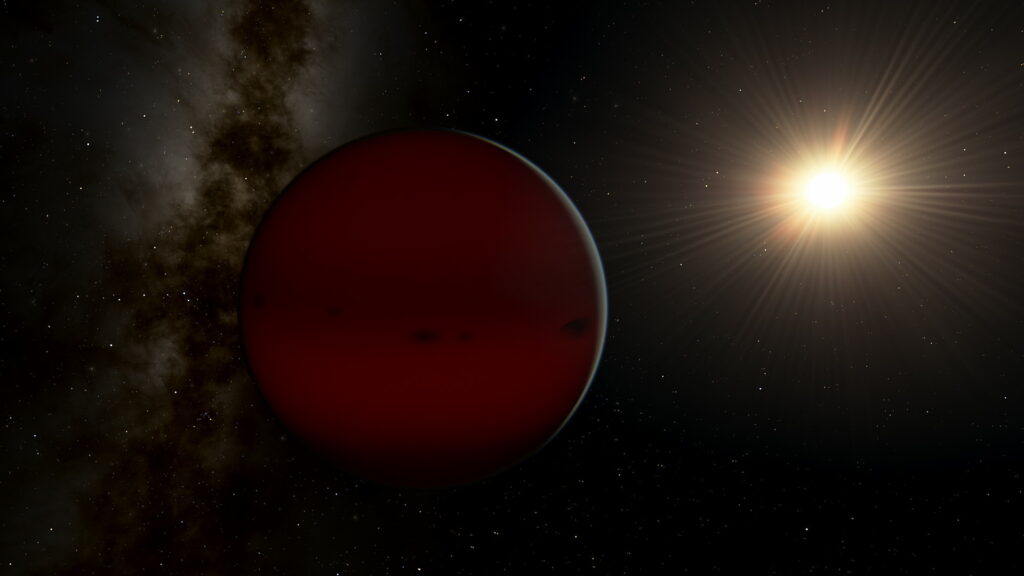 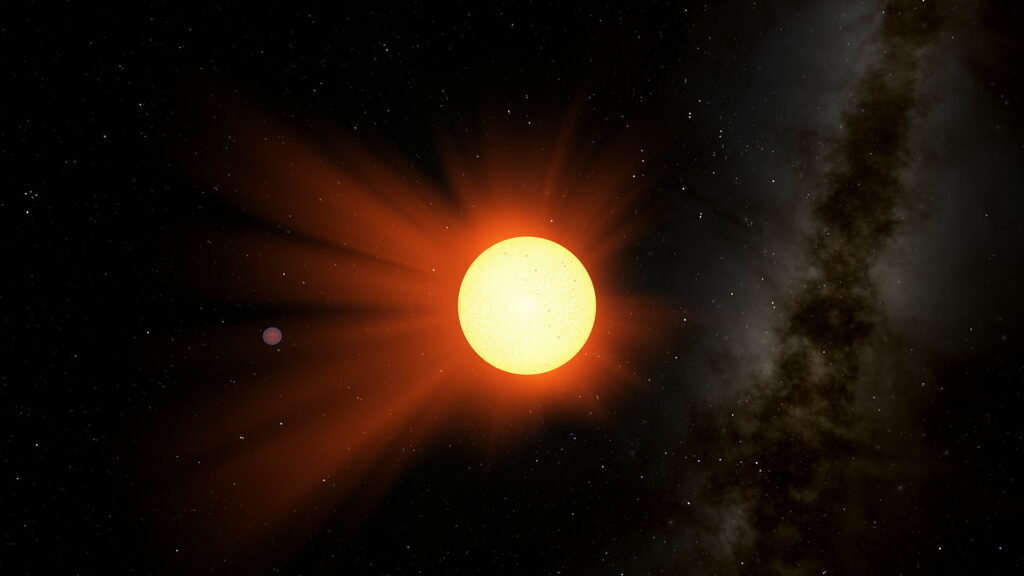 Artistic rendering of red dwarf Gliese 674 with exoplanet Gliese 674 b seen in the distance on the left. Credit: SpaceEngine / Bob Trembley.