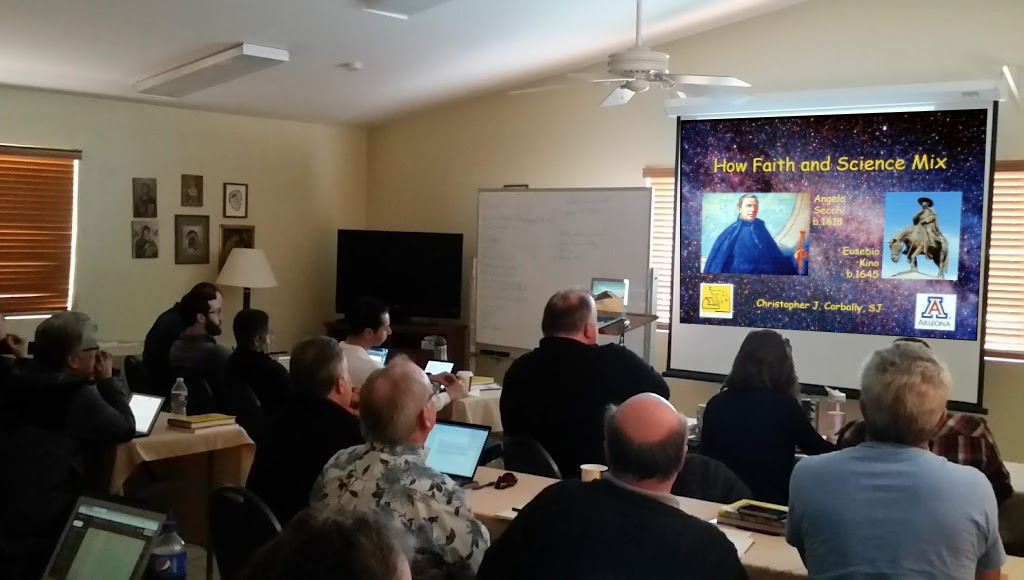 The sign-up period for our 2022 Astronomy for Catholics in Ministry and Education (ACME) Workshop ends soon!

This four day workshop is sponsored by the Vatican Observatory Foundation, and designed for those working in education in Catholic schools and parishes. You will get an up-to-date overview of the universe: from the Big Bang, to the search for life in the universe, to our exploration of the planets…as seen through the eyes of the Jesuits priests and brothers who work at the Vatican’s own astronomical observatory.

I attended this workshop back in 2019 when it was called the “Faith and Astronomy Workshop,” it’s a wonderful experience for educators! I’m hoping to present something again. The cover image for this post is a mash-up of two images I took from 2019.

During last week’s Astronomy at the Beach event, a young girl and her mother joined us during an online session; they were in upper Michigan, at a very dark sky location, with a brand new telescope that they had no idea how to use.

You should have seen all these Michigan astronomers fall all over each other trying to help this young lady via remote – which proved difficult. Someone mentioned binoculars and they had set with them – and went to get them! They ended up getting a remote sky tour, and I heard a couple “Wows” as someone used the binoculars!

We encouraged them to contact an astronomy club for help when they got back home – I think they got something like 5 offers for help! Like I said, Michigan astronomers rock!

My wife and I held our first meeting of our after-school astronomy and space science club, where we explained to the students what we wanted to do over the year. Several of the students were very interested in building and launching model rockets!

Our discussions took a couple tangents, and we showed images of the comet Shoemaker-Levy 9 “String of pearls” and Jupiter impacts, and videos of the Chelyabinsk meteor impact – neither of which the students had heard of.

Feels great to be doing this again!

Jupiter and Saturn … *ahem* … still continue to appear in the southeastern sky after sunset all week.

Venus *ahem* continues to appear low above the southwestern horizon after sunset.

The Moon appears near the star Regulus in the eastern sky before sunrise on Oct. 3rd.

Orion appears high in the southern sky before sunrise all week; the Moon appears near the star Pollux in the early morning eastern sky on Sept. 30th.

The Winter Triangle asterism appears in the southeastern predawn sky.

The Sun has 2 spots – SpaceWeather.com says: “AR2871 has a ‘beta-gamma’ magnetic field that harbors energy for M-class solar flares.”

The Sun seen in 193 angstroms on September 27th.

The northern coronal hole is HUGE, the southern one has all but vanished. Multiple active regions with loop activity all over the Sun’s face.

The Sun seen in 304 angstroms on September 27th.

Position of the planets & several spacecraft in the inner solar system on September 28th:

What a great mission!

I spy a rover

Dr. Noble talks about sending the first woman on the Moon

Middle & High School Students and Teachers can Join the Conversation!

Two massive black holes are locked in a dance at the center of the OJ 287 galaxy. The larger black hole is surrounded by disk of gas; it is also orbited by a smaller black hole that collides with the disk, producing a flare brighter than 1 trillion stars. But because the system’s complex physics affects the smaller black hole’s orbit, the flares occur irregularly. Scientists used NASA’s Spitzer Space Telescope to detect one of these bright flashes on July 31, 2019, confirming that they can now anticipate the timing of these flares to within four hours using a detailed model of the system.

In the second half of the video, the animated diagram on the left illustrates the orbit of the smaller black hole (the red dot) around the larger black hole (the stationary white dot) and its collisions with the disk of gas (the pink line), which occur twice per orbit. The years of the collisions are indicated below the diagram and in the graphic on the right shows, dating to 1886. After more than 16 years of operations in space, Spitzer was retired on Jan. 30, 2020.