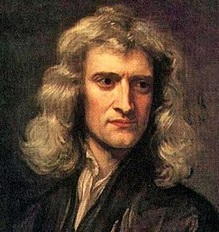 In 2017 Oxford University Press released a new book by Robert Iliffe entitled Priest of Nature: The Religious Worlds of Isaac Newton.  The Vatican Observatory Faith and Science site has an entry for it giving details—click here to check it out.  Newton wrote more about religion than anything else,* but few of those writings have seen much light.  That is in part because his religious views were unorthodox, and often unfriendly to his fellow Christians.  He was anti-Trinitarian—an Arian, if you will—believing to be unbiblical and wrong the Council of Nicaea’s statement that the Son was consubstantial with the Father.  He had nothing good to say about the Catholic Church, and little good to say about the Anglican Church and the rest of Trinitarian Christianity.  Newton may have been unorthodox, but he was, nevertheless, very religious.  Iliffe writes:

Ultimately, Newton’s early life (to say nothing of his last three decades) was suffused with an overriding religious purpose.  Convinced that he had been created in the Image of God, his scholarly life was in part an exercise in examining how he measured up to his maker.  As such, it focused both on perfecting himself and on understanding the works of God.  Accordingly, he strove to make his life that of a godly man, avoiding the temptations of the imagination and its chief effects, idolatry, idleness, and lust.  He condemned the imaginary products of human artifice and instead nurtured his understanding so that he could dedicate himself to studying the divine truths of Scripture and Nature.  The relentless cultivation of his own intellect was the precondition for gaining a mature wisdom, along with a purified will that could make the correct choice between good and evil, and between true and false religion.  It was also this heroic intellectual labor that produced the monumental works in theology, natural philosophy, and mathematics that survive today.

Newton’s religious writings have become accessible in recent years, thanks in part to “The Newton Project” at Oxford University, of which Iliffe has been a big part.  The Newton Project has made Newton’s unpublished work available on-line in digital form.

The opening up of what is the larger portion of Newton’s body of work will obviously change our view of Newton, and in changing our view of Newton, it will change our view of scientists and science.  From my perspective as a community college professor, this is a great.  At my college there has been a growing concern, over the past decade or so, that students not just go to college, but be successful in college.  You may say that a college student should be responsible for his or her own success: I hear you.  However, today’s community college-bound high school students has been educated in a world of high stakes testing.  To that student, education has been compulsory and has involved much being present in classrooms and taking standardized tests.  That student now is encouraged to pursue higher education, often loan-financed, because higher education yields an economic benefit—thus justifying the loans.  Yet realizing that benefit requires not just attending a college, but earning a degree that will yield a good job.  Graduation rates for community college students are poor.  Thus many students, including students with meager financial resources to start with, go to college for a while, accruing debt but no degree.  That is bad.  And the graduation rate is poor in part because higher education is not just classroom time and in-class tests, and it is not compulsory.  Since college is not compulsory, students must engage with their education—they must want to be there and want to learn.  That is their responsibility, but the content of a course can help, especially when that course is an open-to-all-comers, first-year course like Astronomy 101.

This is where Isaac Newton’s religion comes in.  Students seem to me to find an astronomy course more engaging when it contains more than just details of science.  For example: the sun rises every 24 hours (a solar day), but a star rises every 23 hours, 56 minutes (a sidereal day).  Some students find those bits of scientific information engaging.  But, if we also discuss how the four-minute difference between sun and stars results in the sun drifting through the constellations—begetting the zodiac, one’s “sign”, and all such like as that—then many more students find those bits engaging, even if the discussion includes why using the heavens for astrology is not science.  Now consider Newton’s Law of Universal Gravitation, and elliptical orbits.  Some students find those topics engaging.  But Newton viewing such things as part of his idea of God’s universe, while also having views on God that were radically at odds with most of his friends and associates—and radically at odds with today’s conventional wisdom regarding scientists and religion?  That will engage more, and not just “believers”.  People can engage with ideas with which they disagree.  Students can dismiss astrology and still find the discussion of the zodiac engaging, and if my experience with Johannes Kepler is any indication, atheists or (more commonly) “nones” will find a religious Newton engaging.

My experience is that if we want people to engage with science then we must go beyond teaching just the scientific details, and teach the broader story of science.  I think that historians breaking down that old conventional wisdom, and bringing to light the broader story about Isaac Newton and his religion, is an exciting development for science.

See for yourself what historians are bringing to light—click here for the Newton Project.

*Sarah Dry, author of The Newton Papers: The Strange and True Odyssey of Isaac Newton’s Manuscripts (a 2014 book also published by Oxford University Press), responding in a 2014 interview with Wired to the question of how much of Newton’s writing has survived, relates that—