Earlier this year, Neil deGrasse Tyson appeared on Comedy Central to respond to rapper B.o.B, who had just claimed that the Earth is flat. Here is the text of Tyson’s monologue, addressed to B.o.B:

The Earth looks flat because (1) you’re not far enough away, at your size (2) your size isn’t large enough, relative to Earth, to notice any curvature at all. It’s a fundamental fact of calculus and non-Euclidean geometry: small sections of large curved surfaces will always look flat to little creatures that crawl upon it.

But this whole thing is just a symptom of a larger problem. There’s a growing anti-intellectual strain in this country that may be the beginning of the end of our informed democracy. Of course, in a free society, you can and should think whatever you want. If you want to think the world is flat, go right ahead. But if you think the world is flat, and you have influence over others—as would successful rappers, or even presidential candidates—then being wrong becomes being harmful to the health, the wealth and the security of our citizenry.

Discovery and exploration got us out of the caves, and each generation benefits from what previous generations have learned. Isaac Newton, my man, said, “If I have seen farther than others, it’s by standing on the shoulders of giants.” So that’s right, B.o.B, when you stand on the shoulders of those who came before, you might just see far enough to realize the Earth isn’t [expletive deleted] flat.

This was covered by many media outlets, including Fox, The Daily Beast, Rolling Stone, The Atlantic, Politifact, NPR, The New York Times, Space.com, The LA Times, and The Daily Mail. B.o.B remained unconvinced. His response to Tyson was, among other things, that “they” would write Tyson a fat check for his part in The Conspiracy to Hide Earth’s Flatness. 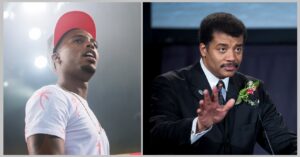 And should B.o.B have been convinced?* Tyson’s words to B.o.B were, Earth is big, you are small, and so you can’t tell that Earth is curved; but if you stand on the shoulders of those who came before—if you know science, in other words—you can see far enough to realize the Earth is not flat. The L.A. Times wrote, “Usually, when a prominent scientist steps forward to set the record straight, that’s the end of the conversation.” But that should not be the end of the conversation. Science is not about prominent figures stepping forward to set the record straight. Tyson did not provide B.o.B with a reason to believe the Earth is round, but rather stated why a round Earth looks flat.

But Tyson could have, and should have, stated the reasons Earth looks, in fact, obviously round. That growing anti-intellectual strain Tyson mentioned—science denial, science rejection, the war on science—is a real problem. It is worth the time of all of us in the scientific community to address it through reason, so that it can’t be answered by “‘they’ wrote you a check”.

So how could Tyson have demonstrated the obvious roundness of Earth to B.o.B, using reason, observation, and measurement? Like this:

B.o.B, let’s make a little cross-country trip—from Grand Forks, North Dakota, to Victoria, Texas. Victoria lies due south of Grand Forks. So that you don’t have to take the word of me or of any scientist, let’s make this trip by bicycle. That’s because we are going to need to measure the distance from Grand Forks to Victoria. And so you don’t have to accept anything on my authority, you can outfit your bike with a precision odometer you personally calibrated to ensure that it measures distance correctly. We will follow the most direct route, even taking walking paths if need be. We will discount the mileage of any side trips. This trip will take us a month, but when we get done, unless Google is way off, your odometer is going to tell you that the distance from Grand Forks to Victoria is about 1400 miles.

But before we leave Grand Forks, we will do two things. First, we will observe where the star Sirius is when it is due south in the sky. And unless the Stellarium planetarium software is way off, we are going to find that Sirius is about 26 degrees above the southern horizon, as seen from Grand Forks. Second, we will observe the sun setting in Grand Forks. 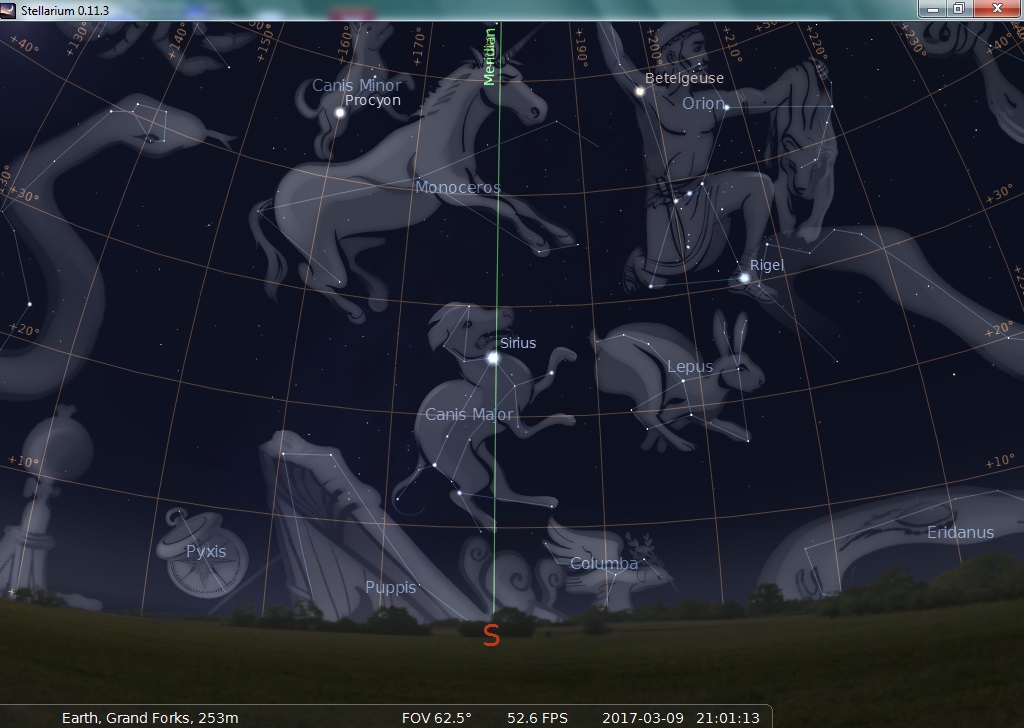 When we get to Victoria, we will do the same two things: observe where Sirius is when due south in the sky (unless Stellarium is way off, we are going to find that Sirius is about 44 degrees above the southern horizon, as seen from Victoria); observe the sun setting in Victoria. 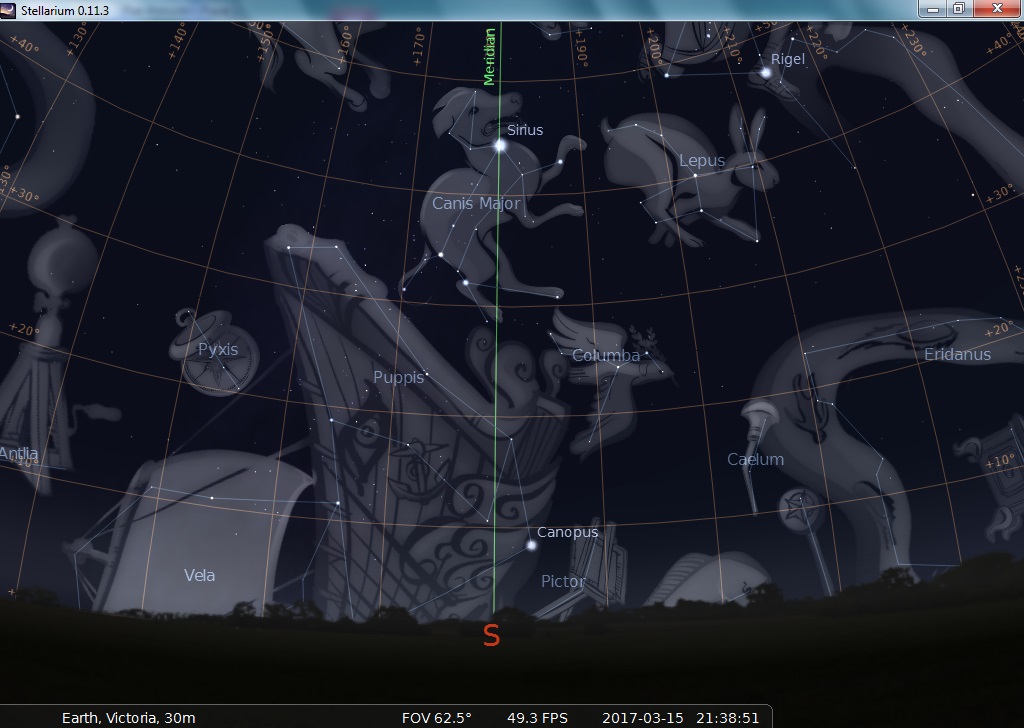 Now let’s see what all this would mean were the world flat. We won’t use any calculus or fancy geometry—we’ll just use a ruler and a protractor and make a careful scale drawing, where 1 centimeter = 100 miles. Like this: 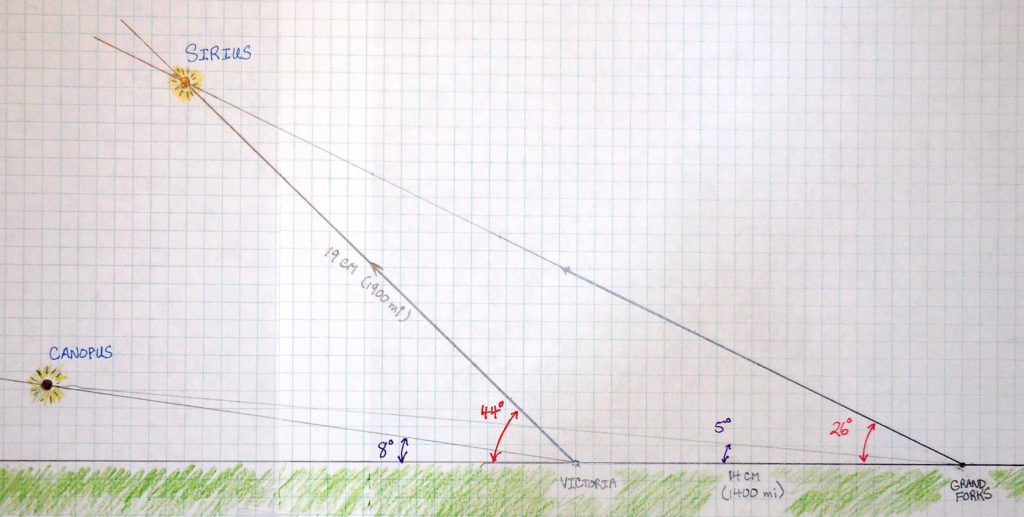 There you have a flat Earth, with 1400 miles (14 cm) between Grand Forks and Victoria, and with Sirius at a 26 degree angle as seen from Grand Forks and at a 44 degree angle from Victoria. Look where that puts Sirius—19 cm, or 1900 miles, above and south of Victoria. So is that star less than 2000 miles away? Is it much closer to Victoria than New York is to L.A? Could we knock Sirius out of the sky with a modest ICBM?

Moreover, take a close look at the sky from Victoria. See how, not only is Sirius higher, but there is another bright star visible—Canopus. Canopus is 8 degrees above the horizon as seen from Victoria. 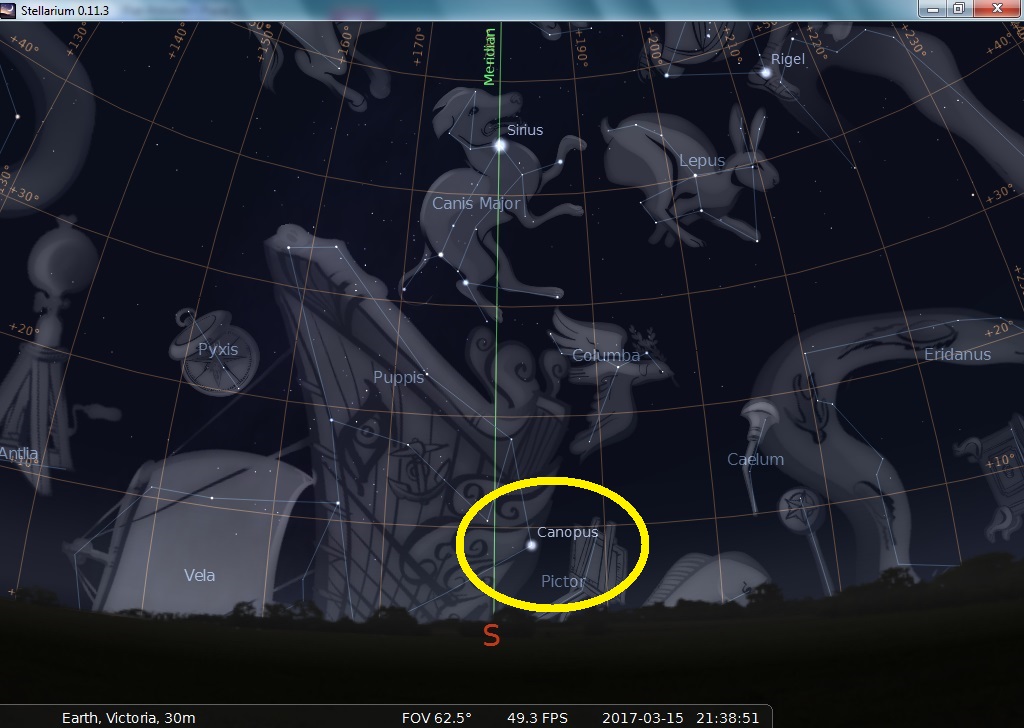 Well, if Canopus is about as far from Victoria as is Sirius, then it must be about 5 degrees above the horizon as seen from Grand Forks. But in fact Canopus is not visible at all from Grand Forks. But if Earth is flat, Canopus must be 5 degrees above the horizon there. Not to mention that Canopus must only be about 250 miles above the ground down in Mexico—and, being so close overhead, it should look pretty bright there. Take a flight to Mexico and see. Or just ask anyone you know from Mexico if they have a second sun down there.

Earth is obviously round. That’s why you can’t see Canopus in Grand Forks—because the curvature of Earth’s surface gets in the way. That is why the angle at which the sun sets is shallower in Grand Forks than in Victoria—because you travelled around the curvature of Earth as you went south. Were the Earth flat the sun would set at the same angle in both places. (Go further south to the equator and the sun sets straight down into the horizon—go north to Alaska and the sun almost skims the horizon).

Not only is Earth obviously round, but you can calculate its size from your measurements. Grand Forks to Victoria is 1400 miles, and Sirius changes height by 44-26=18 degrees. A full circle around the Earth would be 360 degrees, so Grand Forks to Victoria is (18/360)=(1/20). Thus 1400 miles is a twentieth the distance around the Earth. So the distance around the Earth is 20×1400=28,000 miles. That’s a little high (25,000 miles is the accepted figure) but definitely in the ball park, and not at all bad for measuring the roundness of the Earth entirely yourself, with no reliance on any scientific authority.

Then Tyson could ask B.o.B (who certainly has the money to travel around and see much of this for himself) to either walk the talk or stop the talk—no space here for claims about getting checks from “them.”

The fact is, the Earth is obviously and undeniably round. And, free society or not, you should not think whatever you want. If you think you have a billion dollars in the bank, you are in error. You should not think that. And if you think that the Earth is flat, you are in error. If you go right ahead and think that you have a billion-dollar bank account or that the world is flat, then free society or not, things will not go well for you—for in areas where mathematical reasoning rules, like finance or science, error gets you in trouble. Some ideas are right, some are wrong, and while not every idea in science is clearly right or wrong, the idea that the Earth is flat is one that is obviously and absolutely wrong. B.o.B need not take Tyson’s word for it, nor anyone else’s. He can measure, observe, and reason it out for himself. That’s what science is about.

*Tyson is a great representative of science. But, star quarterbacks have to put up with armchair quarterbacks second-guessing them, and so it is here.