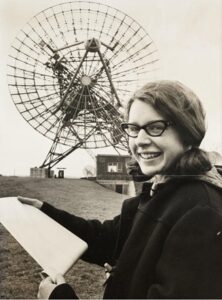 Jocelyn Bell Burnell at the Mullard Radio Astronomy Observatory at Cambridge University in 1968.

Back in September, Deirdre Kelleghan wrote a post on Jocelyn Bell Burnell, who had just been honored with a big award, the 2018 Breakthrough Prize in Fundamental Physics, in honor of her role in the discovery of pulsars in 1967.  The Royal Society, of which Burnell is a member, calls the discovery of pulsars “one of the greatest astronomical discoveries of the twentieth century”.  The Breakthrough Prize is not just a nice piece of paper and a handshake—recipients receive $3 million!

Burnell donated her prize money to the Institute of Physics in the UK.  The money will go toward scholarships for underrepresented people in physics.  Burnell told the BBC, “I found pulsars because I was a minority person and feeling a bit overawed at Cambridge. I was both female but also from the northwest of the country and I think everybody else around me was southern English,” she said.  “So I have this hunch that minority folk bring a fresh angle on things and that is often a very productive thing. In general, a lot of breakthroughs come from left field.”

Burnell, like Kelleghan, is from Ireland.  She has appeared in a few other Catholic Astronomer posts: one post by Br. Guy Consolmagno on Pluto (Burnell managed the meeting when the IAU declared Pluto a dwarf planet), and two different posts by Brenda Frye on pulsars and degenerate stars.

Well, guess what?  Jocelyn Bell Burnell is a person of strong faith.  She is an active Quaker.  And in 2013 she wrote a short book about her faith and astronomy.  The title of book is A Quaker Astronomer Reflects: Can a Scientist also be Religious?  This book is featured on the Vatican Observatory Faith and Science pages—click here to take a look at it.  The full text of the book is freely available.  And the book is short and easy to read.  Give it a read.