Click here for other posts about “Google Doodle Scientists”.

There is a new “Google Doodle” for a scientist today—Joseph Antoine Ferdinand Plateau.  You have probably seen it.  Google states that his work “led to the birth of cinema”.  Well, guess what?  According to an old edition of the Catholic Encyclopedia, Plateau was “a sincere Christian, faithful to all the duties of a practical Catholic”.

If you are interested in his work, the journal Physics in Perspective published an article on him in 2012: “The Life and Work of Joseph Plateau: Father of Film and Discoverer of Surface Tension”.  Click here for an excerpt.  Click here to get the entire article from Physics in Perspective.  The entire article is also freely available via EBSCO, through many public and academic libraries.

Plateau was born in 1801 and died in 1883.  According to Physics in Perspective, “Plateau dedicated himself passionately to the study of … soap membranes until 1844, when he gradually became blind.”  Thus for much of his career Plateau could not see, and yet he produced much science despite this disability.  Physics in Perspective writes that, “According to legend, his blindness resulted from the experiment he had carried out in 1829 when he had stared directly into sunlight for about 25 seconds. This probably caused some temporary damage to his eyesight, but it is doubtful that it can account for his blindness ﬁfteen years later.”  In fact, his blindness was only one of several difficulties that Physics in Perspective noted that he faced and overcame in his life.

A few quotes regarding Plateau, from various older sources:

Before attaining middle age he lost his eye-sight by rash experiments with the unguarded light of the sun; but in spite of this terrible deprivation he carried on, by the aid of his son and others, long investigations in physiological optics, molecular forces, and the behaviour of thin films, which afford a wonderful proof of the power of intellect to vanquish physical difficulties. 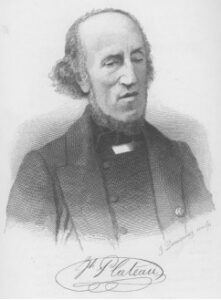 Plateau was remarkable for the extreme delicacy of his experiments, especially those on the superficial tension of liquids. Some years since the beautiful results obtained by him by relieving oily fluids from the influence of gravitation by floating them in liquids of their own specific gravity attracted great attention. Plateau’s researches in physiological optics were of the most refined character. They cost him his eyesight; but, notwithstanding this melancholy deprivation, he never abandoned his inquiries, substituting for his own eyes the eyes of a qualified assistant

In the course of these researches he once kept his naked eye fixed on the sun for twenty-five seconds, and this imprudence brought on a choroid inflammation which, in 1843, resulted in total blindness. Being obliged to give up teaching, he nevertheless continued his experimental work with admirable courage and marvellous success, helped by his elder son, Félix Plateau, the naturalist, his son-in-law, Van der Mensbruyghe, the physicist (1835-1911), and some friends and colleagues in the University of Ghent. To this period belong almost all his famous researches on the statics of liquids freed from pressure, on surface tension, and on the properties of thin liquid plates. After 1844 Joseph Plateau had no laboratory but his study in his own modest home. He himself planned all the experiments and arranged all the details in advance. His assistants would announce in a loud voice everything they were doing, all that they observed, and the results of each process. Joseph Plateau would then dictate the notes and, later on, the text of the memoirs for publication. In this way he worked until he was upwards of eighty. Joseph Plateau was a sincere Christian, faithful to all the duties of a practical Catholic.

from the Catholic Encyclopedia, 1914

This post is just something I quickly put together based on a very little bit of research.  If you like this little post, and you like how it is a completely different perspective from anything else you would have found when you clicked that Google Doodle, then consider clicking right here and supporting the outfit that makes this possible—the Vatican Observatory Foundation.  The VOF is the outfit that keeps the Vatican’s U.S. telescope (on Mount Graham in Arizona) running.  That’s why this blog exists—to keep that telescope doing science.  Support the blog—support the telescope—support science.