This column first appeared in The Tablet in October 2009; we first ran it here in 2016

“Where’s the kaboom?” asked my friend, imitating the whiny voice of the cartoon character Marvin the Martian. “There was supposed to be a Moon-shattering kaboom!” 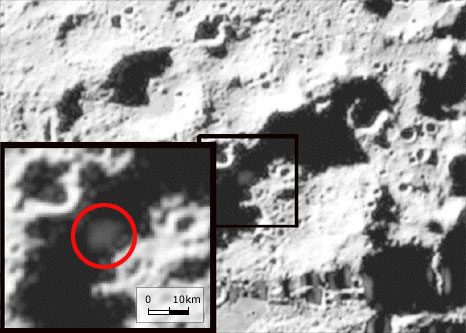 From the BBC, this image shows the material spilled out by the impact of the NASA LCROSS lunar orbiter in 2009

We were watching live television coverage of NASA’s LCROSS lunar orbiter impacting into a dark crater on the Moon. The idea was that water ice might be hidden in the shadows of craters like this one, set in a region of the Moon’s south pole where sunshine never reaches. Water vapor from all the comets that have hit the Moon over the last four billion years might be trapped and frozen there. By slamming a rocket into those shadows, a giant plume of rock and ice would be lifted out of the shadows and into the view of the nearby spacecraft, and telescopes on Earth.

Or so proclaimed the hyperactive NASA press office. In fact, at the impact, only a faint infrared blip was visible in the spacecraft images. News commentators who had earlier joked about America bombing the surface of the Moon now complained that the promised show was a dud.

Water on the Moon was in the news a lot that month [October 2009]. At the annual meeting of the Division for Planetary Sciences of the American Astronomical Union, astronomers reported on the startling findings from the Indian Chandrayaan lunar orbiter that their infrared mineral mapper had seen the distinctive absorption colors of water near the poles. Scientists from the Cassini and Epoxi probes, who had calibrated their cameras by pointing them at the Moon (en route to their primary targets of, respectively, Saturn and Comet Hartley 2) checked their data and found that they’d seen lunar water, too.

But the total water seen amounts to less than a drop in a liter-sized bucket. In fact, that water feature had long been seen in the lunar samples returned by Apollo nearly 40 years ago. But everyone had assumed they were just seeing the contamination of samples measured in the humidity of Houston, Texas.

Contamination is a constant worry when one travels to places where no human has gone before. While it seems odd to worry about the destruction wrought by a puny human rocket booster on a lunar surface constantly cratered over four billion years by nature’s massive impacts (the Nasa rocket made a hole less than a hundred feet across), even the introduction of one tiny sample of terrestrial microbes onto Mars could forever cloud the issue of whether any life we find there is actually native to Mars, or brought in by a momentary slip in the sterilization of the spacecraft from Earth. 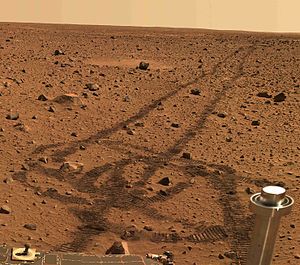 Tracks made by the Spirit rover on Mars; NASA image via Wikipedia

And I appreciate the worries about humans defiling the landscape. I shudder at the sight of ATV tire tracks in the Arizona desert even while I feel a thrill at seeing the same sort of tracks across the surface of Mars. It’s easy to sneer at those who find some scientific excuse to fulfill their adolescent urge to make a Moon-shattering kaboom. It is also easy to sneer at the nannies who would scold us for making such loud bangs.

It is a human urge to make a mark on the universe. Some respond with art; others with graffiti. Some of us write letters to the editor; others, scientific treatises. Yet our every breath – and eventually our decaying dead body – leaves a carbon footprint on the planet. We do not redeem, by ourselves, the cost of our existence.

Meanwhile we spend our lifetime looking, often fruitlessly, for evidence of another’s presence. We still thrill at even the slightest hint of what we’re looking for. And we hope we aren’t contaminating that search with our own traces. Absence of evidence is not evidence of absence; but it may be evidence that we’re looking the wrong way, or in the wrong places.