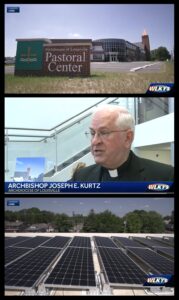 Clips from local news coverage of the Archdiocese of Louisville’s solar panel array (WLKY, May 30, 2018).

I am happy to introduce to readers of The Catholic Astronomer a few guest bloggers.  In September 2017, with astronomy “in the air” thanks to the August 2017 eclipse, my friend and colleague, Prof. Gerry Williger, an astronomer at the University of Louisville here in Kentucky, sent an invitation to Louisville’s Archbishop Joseph Kurtz to attend some of the talks that are part of the Public Astronomy Lecture Series hosted by UofL’s Department of Physics and Astronomy.  Archbishop Kurtz got right back to Gerry, commenting on his own interest in astronomy, and suggesting that they get together to discuss their common interest.  Gerry in turn suggested inviting me and Tim Dowling, who studies planetary atmospheric dynamics at UofL (and who has written a guest post for The Catholic Astronomer on the 2017 eclipse).  Within a week or two the four of us were having our first meeting.  Astronomy was the spark for this endeavor, but of course there is more to science than outer space, and so soon Archbishop Kurtz invited Kate Bulinski, a geoscientist with the School of Environmental Studies at Bellarmine University in Louisville to join us.  The result of all this has been some delightfully nerdy conversations about science (and education, and people, and religion, and the new solar panel array on the archdiocesan offices, and more)!  Of course, with such an interesting group, I had to encourage all of these folks to contribute posts to this blog.

Today we have the first of these new guest posts, a short post from Archbishop Kurtz.  Pope Benedict XVI appointed Most Reverend Joseph E. Kurtz, D.D. as the fourth Archbishop and ninth bishop of the Archdiocese of Louisville on June 12, 2007.  Before coming to Louisville, Archbishop Kurtz served as Bishop of Knoxville, Tennessee, from 1999 to 2007.  If you are thinking that you know the name Kurtz, that may be because Archbishop Kurtz was Vice President of the United State Conference of Catholic Bishops (USCCB) from 2010 to 2013, President of the USCCB from 2013 to 2016, and currently serves as the chairman of the Committee for Religious Liberty, and in that capacity he serves on the administrative committee of the USCCB.  And, most importantly of all, Archbishop Kurtz ranks among The Catholic Astronomer’s subscribers!  Thus he gets the e-mails announcing the various posts (you can subscribe, too—no cost—see “Subscribe to this Blog” above).  And so today he will have the odd experience of getting an e-mail announcing his own post. 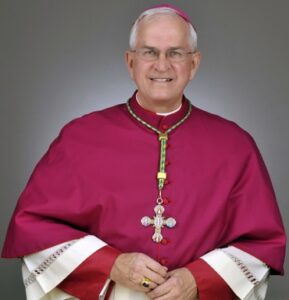 What a joy it is to be on the regular emails of the Vatican Observatory Blog.  I have had an interest in faith and science since I was a boy.  In recent days, much of what is written on this topic assumes that faith and science are opposed to one another.  Instead, Saint John Paul II points out so well in his 1998 encyclical on the topic, Fides et Ratio, that faith complements science—leading the inquirer to greater and greater wonder and curiosity at the magnificence of God’s creation.

I was delighted about a year ago to meet with three scientists teaching at local universities in Louisville.  They reached out to me in the hope that we might discuss the relationship between their Catholic faith and their professions.  We have met three times and even added some others to the dialogue.  Thus far it has been greatly enriching for me.  While our purpose has been to talk and not to plan programs or events, already fruitful results are emerging on the horizon beyond our small group.  At our next meeting, we are inviting two high school teachers from a local Catholic high school—one a theology teacher and the other a teacher of science—who have been collaborating to bring together the richness of both of their concentrations.  These developments remind me of the Latin definition of theology as fides quaerens intellectum or “faith seeking understanding.”  The history of theology clearly reveals that a lively faith does not shun the secular sciences but both learns from them and enriches them.