I am pleased to introduce another “Kentucky Science Conversations” guest blogger:  Gerry Williger, an astronomer at the University of Louisville here in Kentucky.  Gerry is the one whose efforts started the Kentucky Science Conversations with Louisville’s Archbishop Joseph Kurtz, that also involved Tim Dowling, Kate Bulinski, and me.  Dowling, Bulinksi, and Archbishop Kurtz have all written guest blogs for The Catholic Astronomer-Sacred Space Astronomy, so Gerry’ s post here rounds out the group.

Gerry Williger got his Bachelor’s degree at Ohio State, then did a PhD at the University of Cambridge, England funded by a Marshall Scholarship. His thesis was on numerical simulations of intergalactic gas clouds, under Bob Carswell. He then worked as a post-doc at Cerro Tololo Inter-American Observatory in Chile, where he switched from doing theoretical work to observations, and followed that up with a post-doc at Max-Planck-Institut für Astronomie in Heidelberg. After eleven years abroad, he returned to the US to work on the Hubble Space Telescope Imaging Spectrograph team at NASA Goddard Space Flight Center and with the Far Ultraviolet Spectroscopic Explorer satellite team at Johns Hopkins University, both in Maryland. He took up a faculty job at the University of Louisville in 2005, where he teaches and continues to do research on observations of intergalactic gas and also protoplanetary disks (baby solar systems). During sabbaticals/leave, he worked for two years at the Université de Nice, France and most recently at Konkoly Observatory in Hungary on a Fulbright Fellowship. 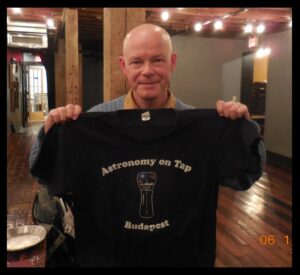 Public outreach in science is important.  We professional scientists usually rely on others for financial support to support our work to “push back the frontiers of knowledge”.  Up to World War II, this was generally done with private funds.  In the sixteenth century, Tycho Brahe had King Frederick II and Emperor Rudolph II as patrons.  In the nineteenth century, William Parsons, the third Earl of Rosse, self-funded his astronomical work and the construction of the largest telescope in the world at the time, the 1.8 m diameter “Leviathan of Parsonstown” in Ireland.  Learned societies like the National Geographic Society (founded in 1888) also funded research using private funds.  After World War II, many governments realized that it was in the public interest to fund scientific research, and consequently most of the scientific research done today is funded by taxes from the public via organizations including NASA, ESA, the National Science Foundation and the European Southern Observatory.

Public enthusiasm really can have influence on the support (or non-support) of publicly funded scientific research.  One example is from 1970, when NASA cancelled three moon landings: Apollo 18, 19 and 20.  The budget was probably a primary consideration.  However, an additional factor may have played a role: declining public support.  NASA planetary curation scientist David R. Williams was quoted as saying, “The whole world was glued to Apollo 11.  But by the time they got to 16 and 17 the general public just wasn’t that interested anymore.”  On the plus side, in 2004 the final shuttle mission to service the Hubble Space Telescope was cancelled by the then-NASA Administrator Sean O’Keefe.  Several members of Congress, including Sen. Barbara Mikulski, fought with much public support (including thousands of letters from American schoolchildren) to get the servicing mission restored.  In 2005, Mike Griffin became the NASA Administrator, and approved a new servicing mission, which significantly extended the operational life of the telescope.  From these examples, public support of science does indeed make a difference.  However, it takes strong and continuous efforts, usually done by scientists and teachers, to educate the public to keep the enthusiasm level for science high in the face of other topics competing for attention and the media news cycle.  This can be done by reaching large numbers of people through the media, as pioneered by Jacques Cousteau, Carl Sagan and Stephen Hawking, and continued today by Sir David Attenborough, Brian Green and Neil Tyson.  However, most public outreach is done by everyday scientists in small groups, whether in classrooms, planetariums, eclipse picnics—or even pubs.

I first became aware of the need for public outreach while in graduate school at the Institute of Astronomy in Cambridge, England, and felt it more and more as my career progressed.  With the encouragement of my fellow graduate students, I started out public outreach by speaking in a school in Cambridge.  At the request of my director, Bob Williams (a great believer in public outreach), I branched out to doing media interviews in La Serena, Chile.  It motivated me to work on my Spanish!  I made a small contribution to the annual open house at Max-Planck-Institut für Astronomie in Heidelberg, which is a good tradition in many institutes and universities, and spoke to more school groups while working at NASA and Johns Hopkins University in Maryland.  I learned that many people, both students and adults, are interested in space exploration and our universe, and their enthusiasm gave me the energy to volunteer my time.

When I arrived as a faculty member at the University of Louisville and worked for two years as a faculty member at Université de Nice, France, my public outreach experience gave me a good springboard to teach astronomy as a basic science requirement.  I continued with some public outreach, especially for events like the 2006/2012 Venus transits and the 2017 solar eclipse, and organized an annual public endowed astronomy lecture for a number of years.  There are only a half dozen professional astronomers in Louisville (including Chris Graney and Tim Dowling), and I very much appreciate the work that local amateur societies do to help us professionals teach the public about scientific discoveries and engender their enthusiasm for learning.

However, I noticed that many outreach efforts were focused on schools, and wished that there would be something more for adults to continue their learning.  At the same time as I was growing in my astronomy career, I was also growing in my faith.  In particular, young adult groups in Heidelberg, Maryland, Louisville and Nice exposed me to non-traditional, community-centered learning experiences including Theology on Tap.  I loved the idea of “taking theology to the people”, and thought of how it must have been two thousand years ago when Jesus and the early disciples would speak in public about theology.  In Nice, I also saw “Science Café”, which looked like a powerful way to reach adults with continuing science education, and to encourage contacts with scientists on a human level.  In Louisville, medical school researchers organize life sciences talks in a pub downtown with 80-100 people in attendance.

After seeing successful public science talks in cafés/pubs, hearing how public outreach helped build up the astronomy program at Ohio University, and noting the level of enthusiasm in Louisville with our annual endowed astronomy lecture, I suggested to my colleagues, Lutz Haberzettl and Jim Lauroesch, that we organize monthly public astronomy lectures starting in 2015.  We held them on weekday evenings in our science building in a 200 seat lecture hall, advertised via community channels and to high school science teachers, and had variable success.  We averaged perhaps twenty people, many of whom were students looking for extra credit in their astronomy classes.  Sometimes our own campus parking service would ticket members of the local astronomy club for coming a few minutes before the parking restrictions were lifted.  We were frustrated by the low attendance.

With the support of the local astronomical society and inspired by Theology on Tap, I looked for a pub to host our lectures.  Luckily, I found one by tasting a beer called “Path of Totality Black Ale”.  The owner loved astronomy and was looking forward to the 2017 eclipse!  We moved there in September 2017 and had good success: our attendance increased to 30-40 per month, and we had many more townspeople in the audience.

Left: A talk at Monnik Beer Co. in Louisville, Kentucky, on the universe as portrayed in the Star Wars movies. Monnik is a pub/restaurant, so younger attendees are welcome. Right: Lutz Haberzettl and Gerry Williger at Monnik. 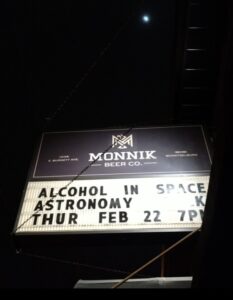 Monnik advertising a talk on “Alcohol and Other Important Molecules in the Universe”. The abstract for the talk included “Drink in the information about it and other organic molecules, which are important to the formation of stars, planets and indeed to potential life itself.”

Talks in pubs are wonderful.  People are relaxed, our numbers are high enough for good atmosphere but not so high that discussion is limited, and we reach members of the public we otherwise would not find.  People are happy to come because when they are not listening to a talk, they can eat, drink and enjoy themselves on their own.  It’s a way of “inviting people to the table”, with no strings attached.

In the meantime, I heard about a movement called “Astronomy on Tap” (AoT), which started in New York around 2014.  It is an umbrella organization which advertises public astronomy talks in non-academic venues, and gives tremendous freedom to local “branches” to tailor the format to local conditions.  I checked them out, and after discovering their flexibility, began to consult with their organizers and advertise our talks on their website astronomyontap.org.  Currently, AoT is held in a few dozen cities across North America and Europe, and has had trial runs in South America and Asia.  In some cities, hundreds of people attend.  Although it is difficult to know the exact numbers, it is clear that thousands of members of the public are engaging in lifelong learning by having science brought to them.

Two experiences arose because of our public talks in Louisville.  First, I invited our local bishop to our endowed lecture series a couple of years ago, citing both the relationship between astronomy and theology and the contributions to science by the Vatican Observatory and from other religious.  I even offered to discuss science and religion with him.  I did not expect an answer, but got quite a surprise when Archbishop Joseph Kurtz wrote to me and said that although he could not make the public talk, he would love to have a discussion with me.  At that point, I wondered whether I was up to the task alone, and called upon two other Catholic astronomers in town, Chris Graney and Tim Dowling, to round out our conversation.  Our first meeting went swimmingly, and Archbishop Kurtz invited us back for quasi-monthly discussions about various topics of science and science education in Catholic schools, including an analysis of “Fides et Ratio” by Pope John Paul II.  I had never read an encyclical before, but gained much appreciation for his scholarship after going through the work.  There are indeed many points of common interest between science and religion, and it is well worth it for scientists, religious and the lay community in either sense to explore them.

I had a second enterprise spring from setting up AoT in Louisville.  I applied for a Fulbright Fellowship to do research in Budapest, Hungary in 2018-19.  There is a wonderful research group on proto-planetary disks (baby solar systems) there, and I wanted to improve my knowledge of the language and culture in the country where my parents were born.  Fulbright Fellows are expected to do public outreach in their host countries, so I proposed to found Astronomy on Tap in Budapest.  A colleague, Jacob White, co-founded it with me in January 2019 and helped to recruit other organizers, and AoT-Budapest has been going well ever since.  The story of my year by the Danube and the consequent professional and personal growth will be a good subject for my next blog.

Photos of Astronomy on Tap in Budapest.  Gerry Williger is standing in the photo at left; Jacob White is to his right.